Ten years ago, I began my journey into real film studies. Upon deciding that I wanted to go into film-making as a profession, I began watching everything and anything I could get my hands on. While my dreams of working behind the camera or in an editing room have dulled slightly over time, I still love watching any movie that comes across my screen. Loren Cass was no different. However difficult it is, to digest this harsh world set before us, it is nevertheless an interesting ride.

With Loren Cass, director Chris Fuller presents us with a raw, unpolished look at a very specific segment of society, during a time of boredom, angst, and undirected anger. The American independent film movement was presented with similar film-making in Larry Clark’s Kids and Bully, Harmony Korine’s Gummo, and to some extent, David Gordon Green’s George Washington. While I don’t think Loren Cass will necessarily gain the following that those films have, it certainly presents as strong a vision.

We are presented with an area of Florida, that has seen a riot in it’s recent past, but whose inhabitants are still disaffected, harboring resentment towards the other races. The three main characters are each going through the motions of daily life, without ever really doing anything substantial with their lives. We see a snapshot of their lives in this moment, without the obligatory idea of imposing a narrative, where none is needed.

Loren Cass will turn your stomach, not because of any graphic imagery, because of the exact opposite. You want something to happen, for these characters to get themselves out of the world they’ve grown up in, and in turn, you feel for them. I wouldn’t go so far as to call any of the people on screen sympathetic, except perhaps Cale, the mechanic. That could be simply because I can relate to the romantic situation he finds himself in. Overall, these people are almost embarrassingly honest in their performances. I would never want to be friends with these people, but I would like to see them at a happier place in life.

This is obviously Chris Fuller’s first film. I say that with all of the respect and admiration a former film student can give another. The shots are not particularly inspiring, the music, abrasive at times. These, however, create a sense of realism that just isn’t found in many of today’s filmmakers. I’m thinking specifically of this past years (500) Days of Summer, directed by Marc Webb. I felt that film lacked any sense of realism, in it’s attempt to create a believable story of love and loss.

This is a film that will certainly reward repeat viewings, as you will be able to observe the small nuances each actor brings to the screen, however unsavory they may be. If you enjoyed your viewing of David Gordon Green’s George Washington, or Harmony Korine’s Gummo, you’ll certainly want to add this to your Netflix queue.

Kino Video will be releasing Loren Cass on DVD on Tuesday January 5th, 2010. The DVD is barebones, which is a real disappointment, after reading all that went into making this film. I’m sure a commentary, or a documentary would be incredibly rewarding. Hopefully, if this film finds a larger audience, a future release will include more than just the film itself. 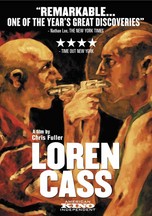