What was that movie, with that guy? I can never find it at the rental store.

Over the past year, Warner Brothers has begun presenting the world with a collection of films that have never seen the light of DVD. Films that perhaps did poorly at the box office, but have remained popular amongst online fans, or have some sort of relevance in today’s film world.

This past week, we saw the release of Emir Kusturica’s Arizona Dream, starring Johnny Depp, Jerry Lewis, Vincent Gallo, and Faye Dunaway. While this is certainly not Johnny Depp of Nightmare on Elm Street or 21 Jump Street, it is certainly the Johnny Depp of What’s Eating Gilbert Grape. Released in the States in September of 1994, it did rather poorly in a limited release, and has remained largely unknown, despite a European release on DVD and HD-DVD, by Studio Canal. 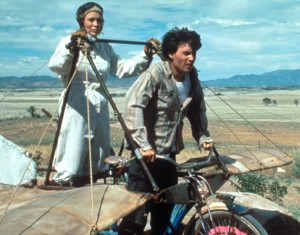 I had no idea what to expect from this film when it landed on my doorstep, but I have to say it certainly exceeded my expectations. It weaves the tale of a man returning home with his brother, who is swept up in family politics and eventually forms a love triangle/square with an older woman and her step-daughter. This plot description does not begin to convey how interesting this film is. The Johnny Depp that we will see later in films like Fear and Loathing in Las Vegas and the Pirates of the Caribbean films certainly makes appearances at times in this film. Jerry Lewis plays a toned down, more serious version of himself, while still not able to contain himself during fits of frustration, as he flails about, making nonsensical noises. Faye Dunaway is also a joy to watch, as she is able to stand up to anyone willing to take her on. The real star of this film for me, is Vincent Gallo. I don’t think I’ve ever really given him a chance, and had some sort of negative connotation with his name when it comes to choosing what films to watch. There are two key scenes that I’d like to share with you, that aren’t spoilers. There is a talent show scene, in which Vincent Gallo re-enacts a key scene from North by Northwest, which is transcendent. Gallo is completely in the moment, and while a bit absurd, is believable. The other film-related scene is a moment when, flipping through the channels on the TV, he lands on The Godfather Part 2, and proceeds to recite the dialogue, word for word. 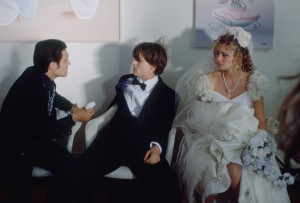 The dialogue, at times, is fast paced and unbelievable, but totally works because the actors sell it. They all believe what they’re saying, no matter how ridiculous it is, or how overwrought. The music is nothing amazing, but suits the film at key scenes. The transfer, being what this DVD is, is better than some straight-to-DVD’s I own. I’d say this film is definitely worth watching, if you’re a fan of any of the actors previously mentioned, as it will help fill out your understanding of their work. If you can find this disc at a rental store nearby, I’d say rent before you buy, but honestly, I can see myself coming back to this film to catch some of the moments I might have missed.

The Warner Archive Collection presents a very interesting force in the DVD distribution world. Where the Criterion Collection revives films that have been lost to the ages, then restoring the image quality, and producing some of the best supplemental materials the world has seen, the Warner Archive Collection essentially does the almost opposite, but I don’t mean that to be a pejorative. From the point of view of the distribution companies, some films are just not financially viable options, when it comes to deciding what should get a DVD/Blu-ray release. Allowing people to essentially print these DVD’s on demand, allows those fans who have been waiting for specific releases to finally have a copy of that movie that has never made it to their local store. The fact that these discs are not re-mastered from high definition sources, or contain any supplemental materials is certainly disappointing, but I have to imagine that if Warner Bros notices a dramatic spike in sales surrounding one of their Archive releases, they’d reconsider releasing the film with a proper assortment of features.

There are two final thoughts I’d leave you with, when considering purchasing a Warner Archive Collection film: price and future online availability. The fact that these films are considerably higher priced than most DVD’s you might find on Amazon or Deep Discount, by spending $15-20 on one of these films, you are in a sense, making future releases a possibility. While the infrastructure to operate this endeavor is probably not too costly, there are people working hard on finding these titles, and transferring the films to discs. You’re also showing Warner Bros that we cannot allow films to simply fade into nothingness due to a lack of current interest. With the cost of Blu-ray production still rather high, there are dramatically less older titles being produced. Even the Criterion Collection is moving slowly in the shift to Blu-ray. Finally, I wanted to touch on a future possibility with these films. You can currently buy these Warner Archive Editions from their website in the form of a digital download, which is admirable on their part, however, I cannot imagine that many people are taking advantage of this option. I think it would be an incredibly smart move if Warner Bros decided to form a partnership with Netflix, and make many, if not all, of these films available on their Watch Instantly service. It would not require much on Warner’s part, as they already have digital copies of all of these films at the ready, and the audiences who utilize Netflix’s Watch Instantly service are the prime audience for these films. Also, making these films available, could help promote what the Archive Collection is doing, thus expanding their lineup eventually as people begin to purchase the films they’ve watched.

While at SXSW this past week, something that was touched on again and again, was the need for distribution companies to remain relevant in this new digital economy, and I think Warner Bros is taking the right initial steps with this, but they have a long journey ahead of them, in order to prevail.

Check out the official link to the Arizona Dream release: http://bit.ly/ArizonaDream