A Journey Through the Eclipse Series: Chester Erskine’s Androcles And The Lion

I can’t explain why, it’s probably just some kind of buzz in the air these days, but this weekend I had a strong urge to watch a movie featuring a lion who befriends humans in a story based on English literary source material with Christian overtones.

Family get-togethers and other tasks prevented me from going to the theater to watch the next installment of the Chronicles of Narnia, but my DVD collection just happens to offer me the  next best thing: Androcles and the Lion, from Eclipse Series 20: George Bernard Shaw on Film. 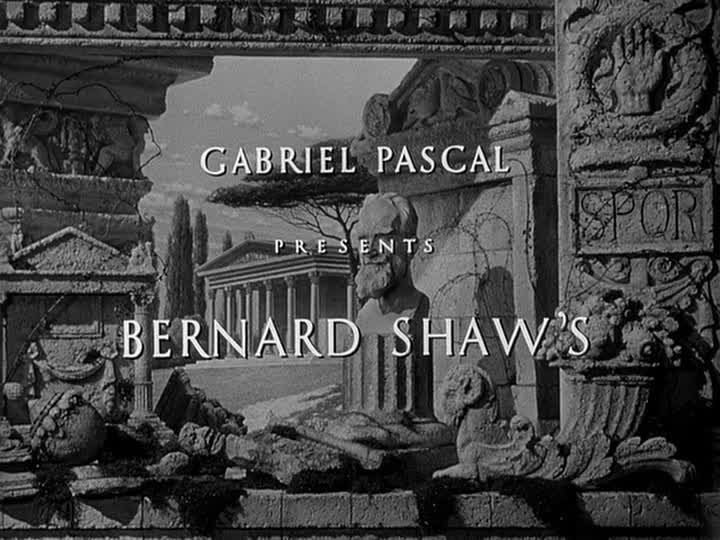 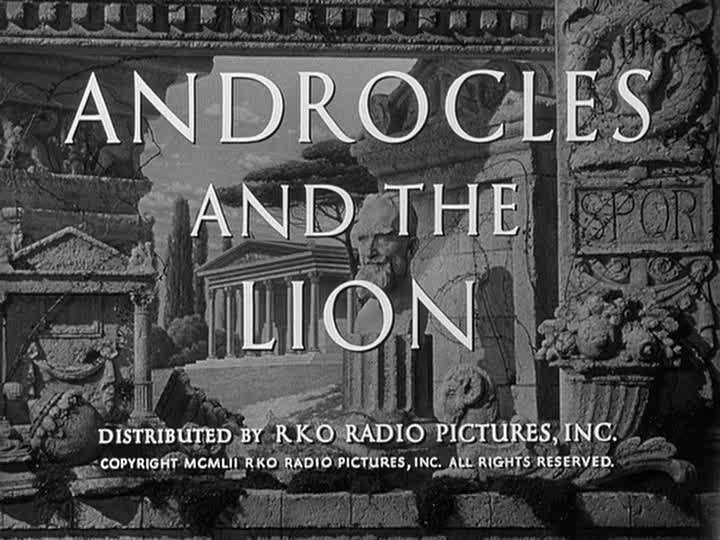 While the film hasn’t been granted a place in the annals of superior cinematic achievements, you may be familiar with the basic elements of the story. A timid man is accosted by a lion in the wilderness. Fearing for his life, he quickly discovers that the lion has been afflicted with a painful thorn in its paw, so he overcomes his fears and helps the lion out by removing it. The show of bravery wins the lion’s respect and trust, and the two go their own way, seemingly never to meet again.

Later on, when the lion and his benefactor are reunited through sheer coincidence, the expected slaughter doesn’t take place due to the lion’s fond recollection of the help his would-be victim once offered. The lion turns docile, to the amazement of everyone involved. It’s an old tale, out of Aesop’s Fables, that the prolific English writer Shaw adapted in 1912, right around the same time that he wrote Pygmalion, one of his most famous plays that was in its turn adapted on film by Anthony Asquith and eventually entered the Criterion Collection.

Given the monumental output and cultural impact that Shaw generated in his lifetime and the on-going interest in his work that continues to this day, the release of a set of his plays on film makes sense, but now is as good a time as any to make my disclaimer. Androcles and the Lion requires most viewers to extend generous benefit of the doubt and work through some awkward, silly and occasionally painful stretches, and may not deliver much payoff, depending on one’s taste or interest in the particulars of the story. 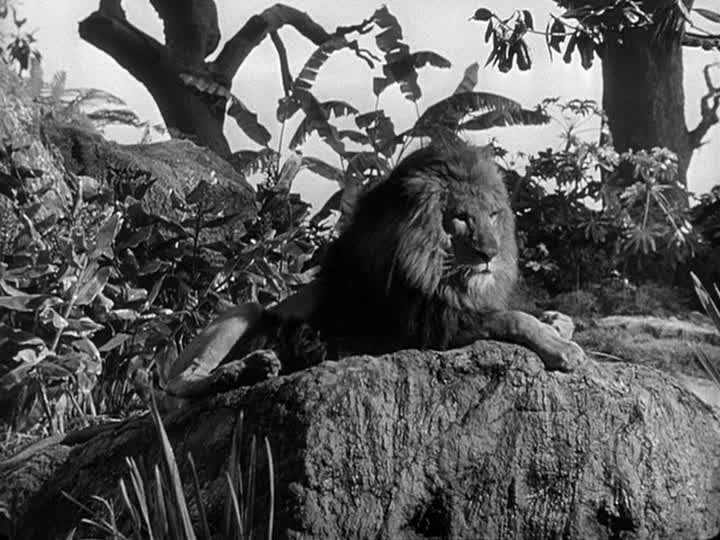 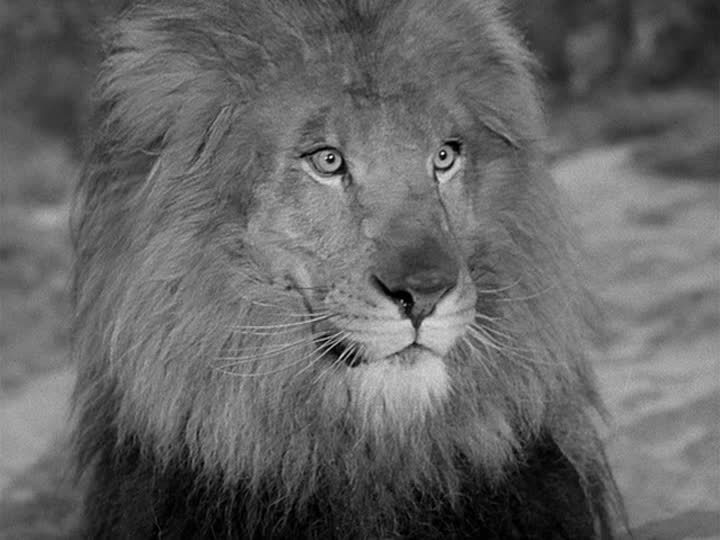 The problems begin with the frame of reference that Shaw brought to his expansion of the short paragraph-long story we find in Aesop. Rather than simply tell the story of a runaway slave, Shaw puts the characters in the context of Imperial Rome of the 2nd Century CE, when the nascent Christian faith was facing intense persecution by the Roman authorities, and prospering greatly in winning converts from the masses, either in spite or because of the heavy-handed government resistance. Thus, the simple parable of courage and gratitude became a more complex work of social satire, one that’s capable of holding our interest only if we’re willing to tap into the cultural context that Shaw was addressing.

Our views of ancient Rome and the role of Christianity in that society and nowadays have changed considerably over the past 100 years. Some of the anachronisms that Shaw threw into his play, such as the singing of 19th century hymns like “Onward Christian Soldiers” or his various typologies aimed at competing theological traditions within Christendom at that time, come across as jarring or even annoying at first, or perhaps simply confusing or irrelevant to anyone who’s just not that intrigued by the subject. 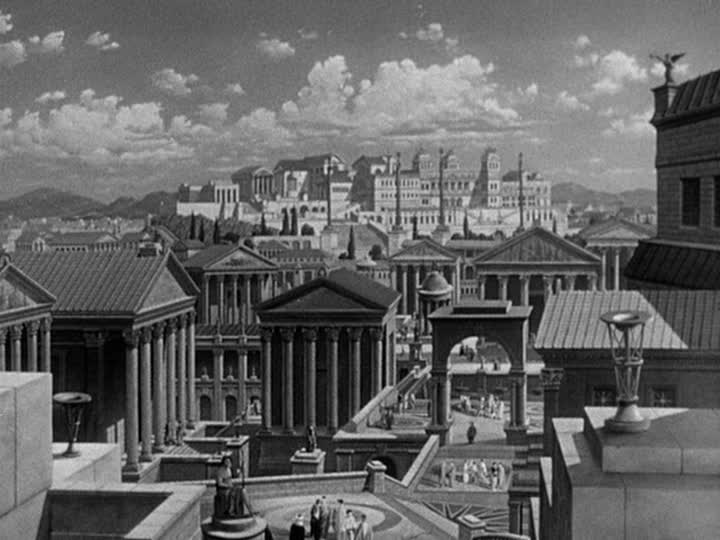 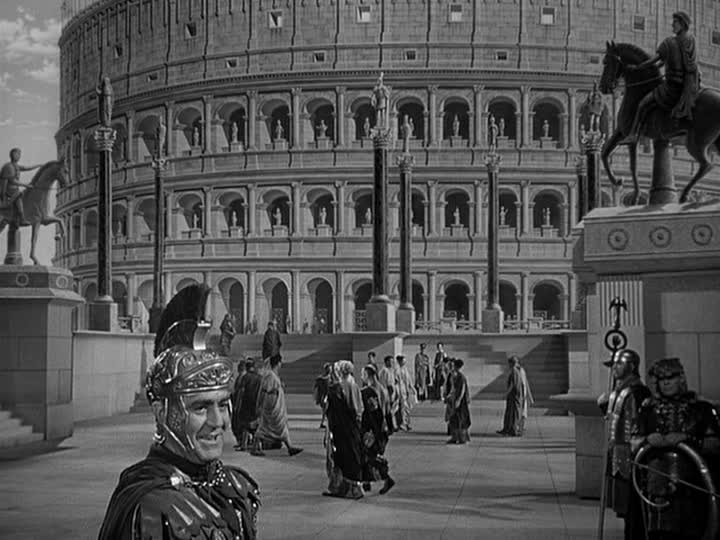 But even for those like me who do have an ongoing interest in religious matters and the long, drawn-out culture wars that have been unfolding in Western societies over the centuries, the film version of Androcles and the Lion hardly does us any favors in helping us engage with Shaw’s intriguing source material.

Produced during Howard Hughes’ tenure as chief of RKO Radio Pictures, it suffers from stiff direction, hammy acting, a deflating musical soundtrack that aims for whimsy but often induces groans, well-intended but chintzy studio back lot sets and wardrobes, and a general inability to grasp the ironic and barbed satirical swipes that Shaw was trying to convey through his dialog. But if one is able to set all that aside, Androcles and the Lion still has enough going on to make it worth a watch. 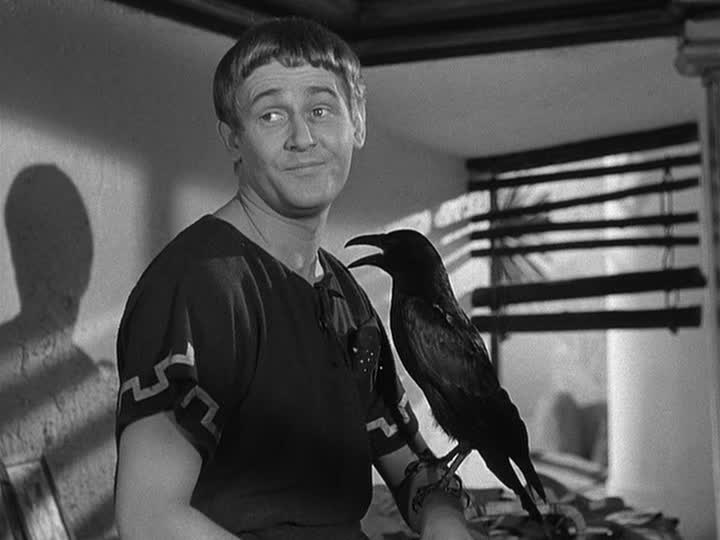 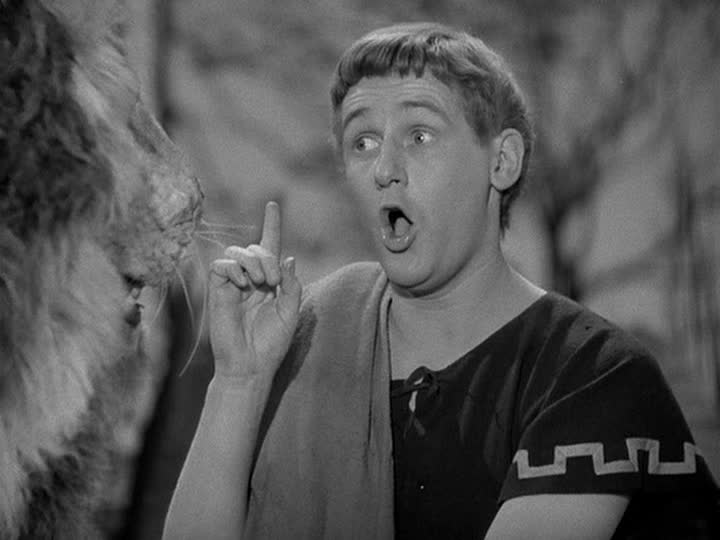 Let’s start with the actors. In the title role of Androcles, we have Alan Young, most famous now for his role as Wilbur, owner of a talking horse in the 50s sitcom Mr. Ed. His performance, which only earned fifth place on the bill despite carrying most of the screen time, is bogged down by the cloying pious and naive mannerisms that were written into the role by Shaw but could have still been handled better by director Chester Erskine and Young himself.

I can only suppose that making faces and simpering baby talk were considered funnier back then than they are now. His character becomes a bit more appealing as the story progresses and he becomes somewhat of a precursory animal rights activist (Shaw himself was a vegetarian.) 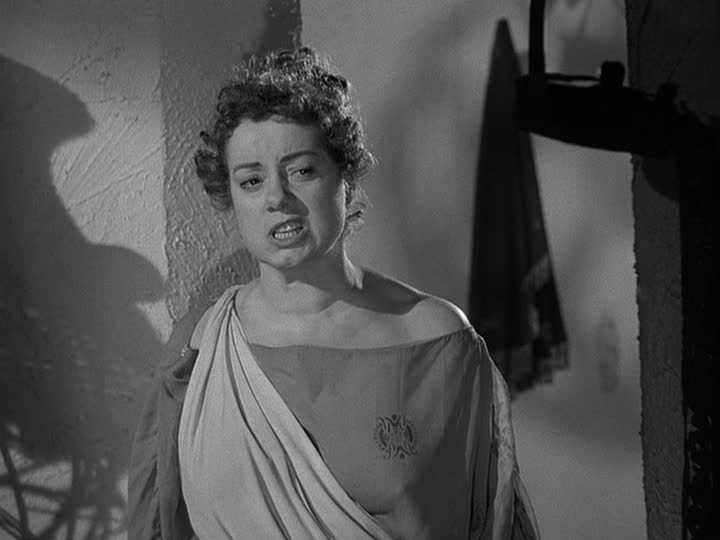 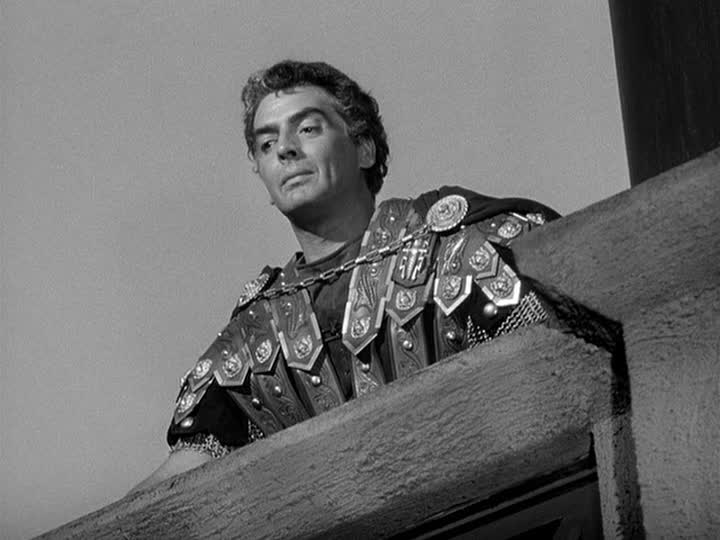 His wife, Megeara, is played by Elsa Lanchester (she was the Bride of Frankenstein and wife of Charles Laughton), who incongruously carries on like a shrewish Irish housewife as she berates her husband in the early scenes before disappearing altogether once Androcles saves the lion and gets taken prisoner. Though Lanchester had a great career and is a fascinating personality, I can’t say that I was sad to see her get such short screen time in this performance.

Victor Mature brings impressive eyebrows and functional hunkiness to his role as the Roman Captain in charge of Christian prisoners due to be thrown to the lions in the Colosseum, but otherwise doesn’t do a whole lot to generate sparks with Jean Simmons, who is as exquisite and classy as always in her role as Lavinia, an upper class Roman citizen who’s made the risky but principled conversion to Christianity. The script has them go through the motions of an anguished attraction to each other that can never be consummated because of the religious and political tensions that interpose between them, but again the direction and conventional romantic atmospheric tropes just don’t measure up to anything persuasive on the surface. Still, she’s a charming actress and beautiful in her diaphanous gowns, so there’s always that… 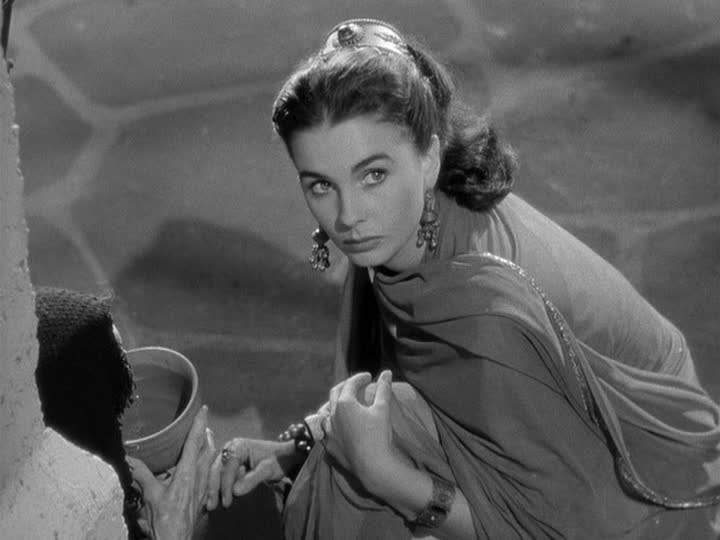 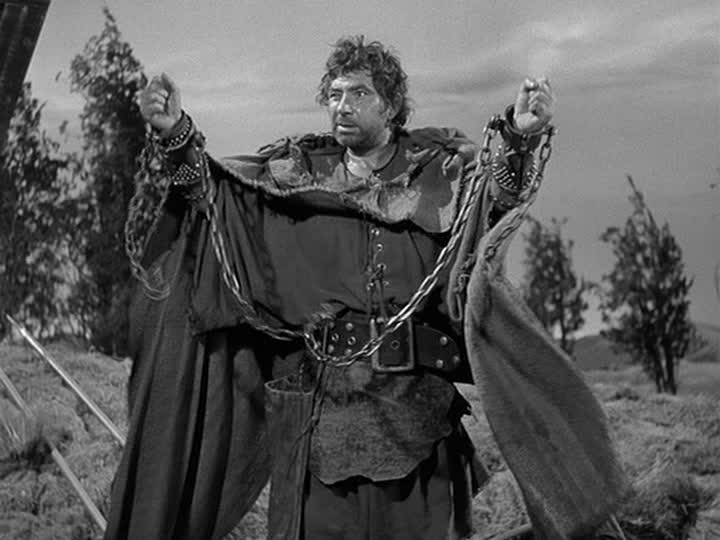 Robert Newton as a hulking strongman turned meek penitent due to his embrace of the literal interpretation of the command to “turn the other cheek” pretty much steals the show whenever he’s given the chance. His eye-bulging, snarling efforts to contain himself when tempted to backslide into the aggressive habits that preceded his conversion amused me despite being a bit overwrought.

Newton was a great character actor of his era, playing the villain Bill Sikes in David Lean’s Oliver Twist and immortalizing the phrase “Aargh, matey!” as Long John Silver in Disney’s version of Treasure Island (so all you “pirate talkers” out there, take notice and respect your roots.) Ferrovius, his character in Androcles and the Lion, isn’t nearly as immortal as those two, but it adds some much needed brawniness to the proceedings, which would be entirely too wimpy without him. 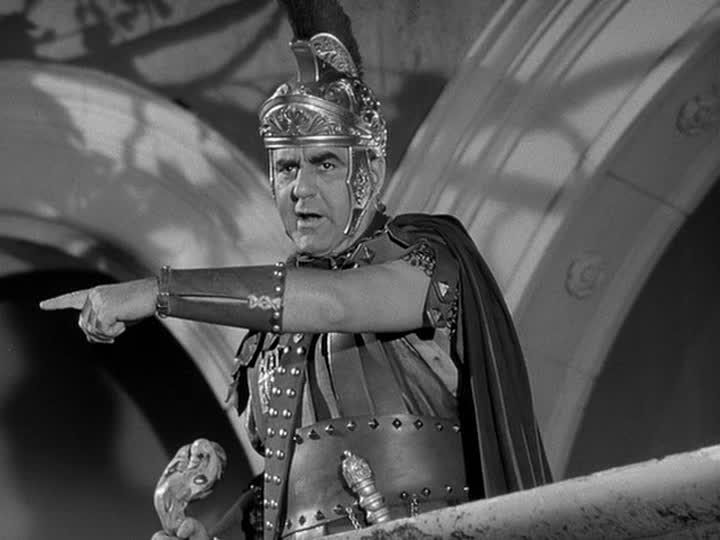 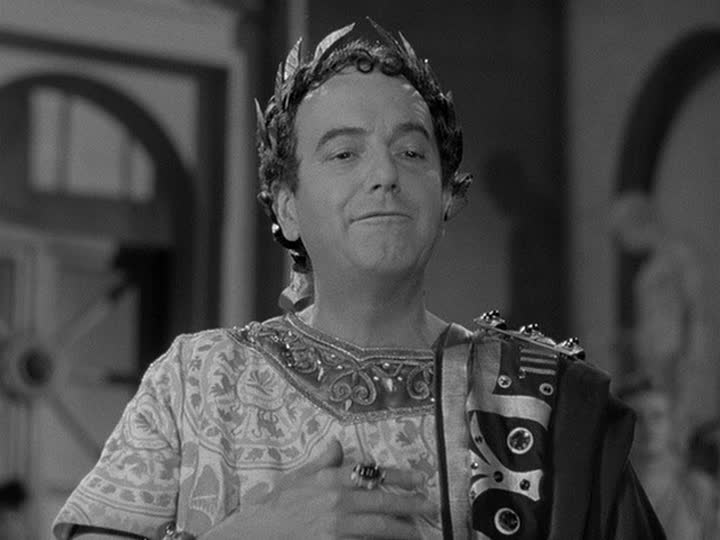 Finally, some will enjoy watching Maurice Evans (Dr. Zaius, the kind elderly orangutan from the original Planet of the Apes movies) as Caesar and Jim Backus (Thurston Howell III from Gilligan’s Island and the voice of Mr. Magoo) as a bellowing centurion in bit parts that strike some enjoyable notes of familiarity.

As the character types get sketched out and the Christian prisoners finally make their arrival in the dungeons of the Colosseum, about halfway through the film, Shaw’s engagement with matters of theology and philosophy help to put some of the frivolity on the back burner. He leads us to ponder the tensions between convenient conformity and duplicitous hypocrisy, ideological exclusivism for the sake of purity vs. religious tolerance in a diverse and pluralistic society, spiritual fidelity for the sake of a clear conscience contrasted with the motivation of seeking martyrdom in order to atone for one’s sins and avoid the torments of hell.

Shaw’s underlying challenge to the institutional church of his day, and now of ours, is to draw the parallels between how it organizes and enforces compliance – does it more resemble the methods employed by Caesar and the imperial authority or the more earnest, idealistic and sublime role models like Lavinia, Ferrovius or Androcles himself?

When the fateful and anticipated encounter between Androcles and the Lion finally takes place, it’s not without another large dollop of silliness, but at least it’s so goofily over the top that one can hardly help but laugh as man and beast cavort across the floor of the arena. A bit more foolery follows as the tables are briefly turned on Caesar and his minions, with Androcles’ “sorcery” soothing the savage beast and yielding at least a temporary and mostly symbolic victory to the forces of non-violent pacifistic subversion of empire. 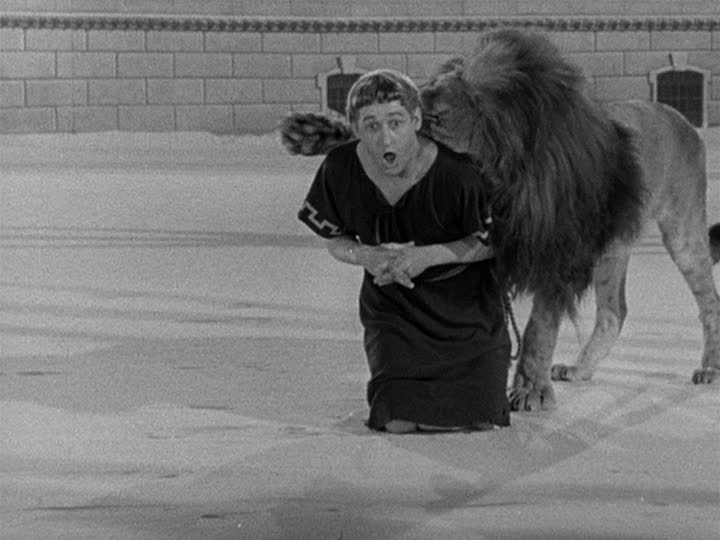 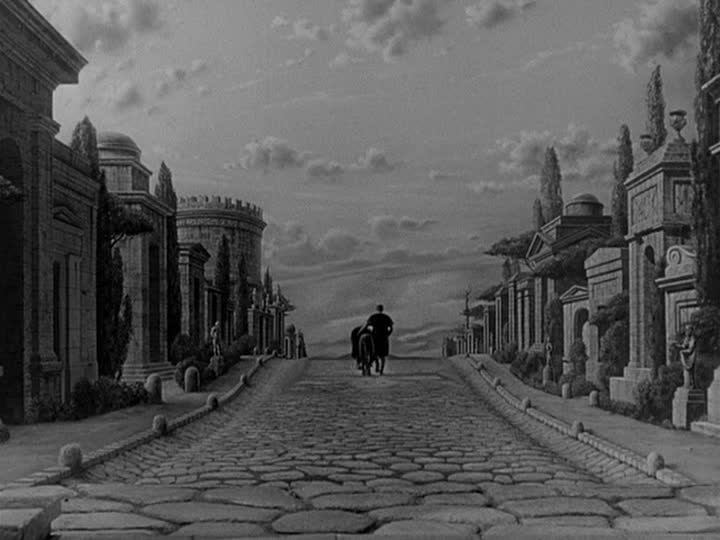 Giving this version of the story an unqualified imperial “thumbs up” requires more humility and innocence than I can muster for the task. But I don’t think I’d be leading you into temptation to recommend a look at this odd little hybrid of English satire, sophisticated intellectualism and middlebrow Hollywood spectacle. 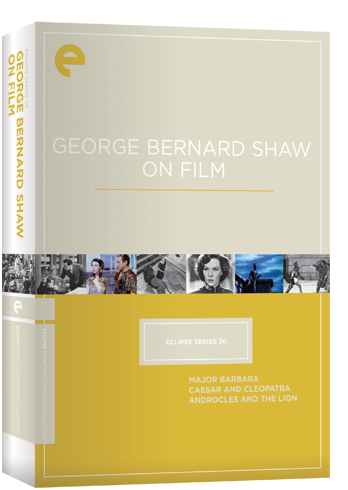 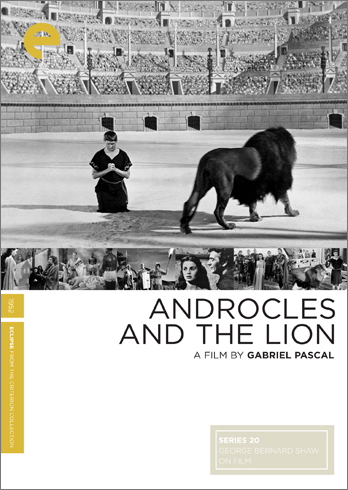