A Journey Through the Eclipse Series: Norman Mailer’s Wild 90

It’s been a little over a month since Eclipse Series 35: Maidstone and Other Films by Norman Mailer staggered in drunk from wherever these crude artifacts had been biding their time over the past few decades and rudely elbowed their way into the consciousness of today’s cinephiles. Easily overlooked among the rich lineup of late August/early September Criterion releases (like Weekend, Quadrophenia, Lonesome, the Dardenne Brothers films, the Marcel Carne classics, etc.), the slim but pugnacious box set quickly surmised that it was being ignored, so it relied on acting out behaviors to noticed, calling attention to itself by highlighting the ferocious real-life brawl between Norman Mailer and Rip Torn  caught on film that proved to be Maidstone’s most infamous moment. Those of us drawn in by such tawdry spectacles took notice, momentarily at least, but soon enough moved on to other things. Still not willing to settle down into meek anonymity or suffer the more egregious offense of apathetic indifference, Mailer’s avant garde trilogy is coming back at us with a new publicity push, launched earlier today through the Criterion Current, with Part 1 of a two-part  interview with cameraman D.A. Pennebaker, who was hired for $1500 to roll the film while Mailer and his pals improvised their bizarre mafioso shtick in Wild 90. 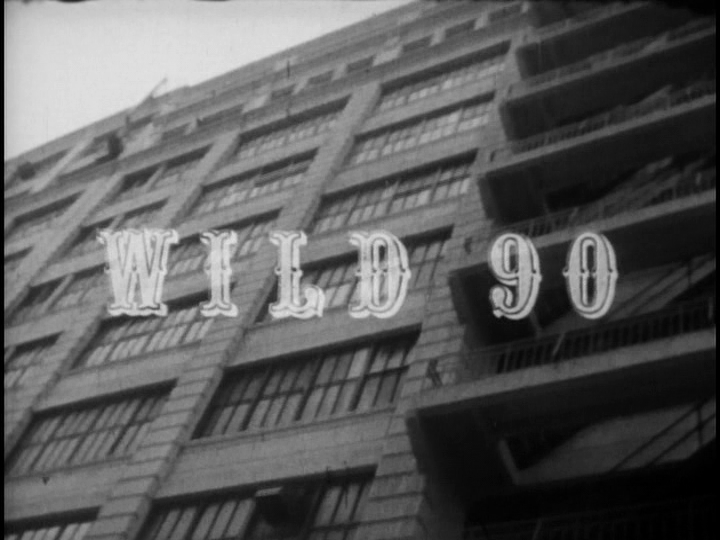 Cinematically vapid, narratively aimless, technically inept and brazenly, obnoxiously crude in every sense of the word, Wild 90 has to be seen in the context of its times in order to even begin to be appreciated. An outgrowth of the raw indulgence and exhilarating expressive freedom that ran rampant in late 60s pop culture, it’s obvious to me that Mailer saw what was happening in the film scene of that era as New York-based directors like John Cassavetes and Robert Downey Sr. were enjoying some artistic success with their ragged, profane, low-budget explorations of the modern psyche. This film was the celebrated author’s first stab at breaking out of the literary cul de sac he found himself in. To this point, I’ve never been drawn into exploring the Mailer mythos myself; his blatant self-promotion and perpetual chasing after sensational topics to write about just failed to connect with me while he was alive. But these films may just forge the connection, now that I find myself at a stage of life where I can better relate to the screwed-up hyper-masculine headcase that reveals itself with such devastating candor, through the blustering posture he adopts to mask his crippling insecurities. 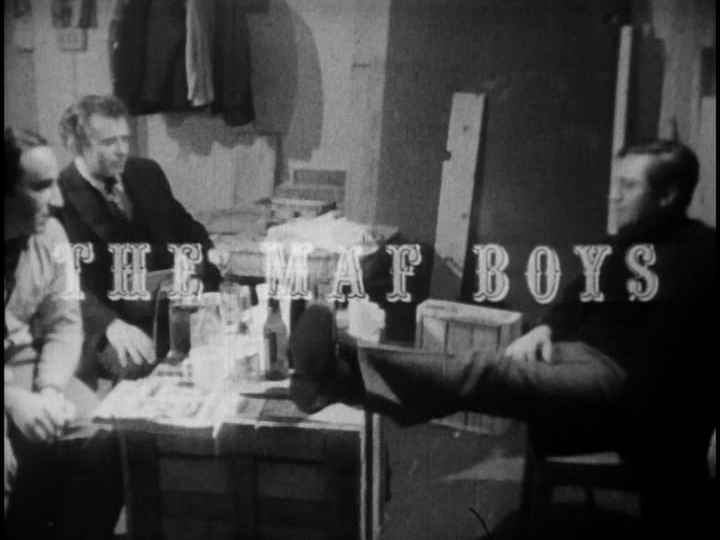 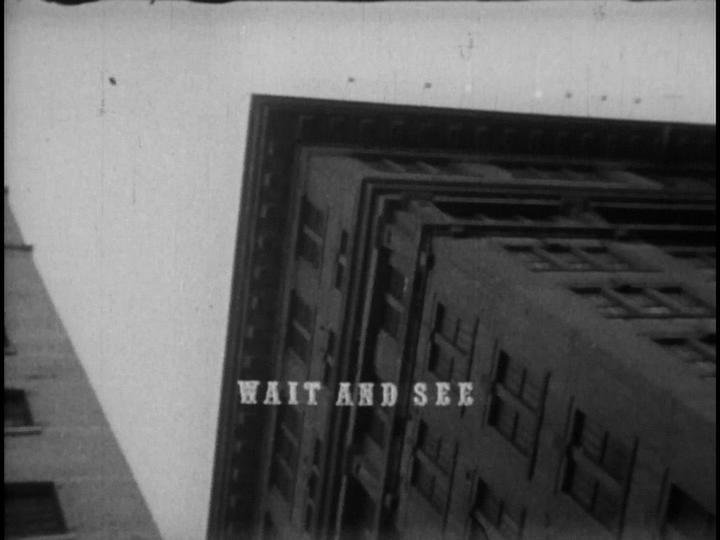 Though I have yet to find a single review of Wild 90 that can be chalked over to the “thumbs up” side of the ledger, I can’t bring myself to regret the experience. After spending a couple days watching it all the way through a few times and clearing out some semblance of a comfort zone in its rambling, booze- and sweat-drenched milieu, I’m even able to say there’s a fair amount of enjoyment to be found in watching three smug middle-aged assholes give themselves free rein to express whatever dark imaginings came to mind as they burrowed ever more deeply into artificial personae they had developed to while away late-night hours spent in Manhattan bars in the winter of 1967. Mailer, along with his buddies Bernard Farber and Mickey Knox, landed on this construct of “The Maf Boys,” (Maf being short for Mafia) in which they enacted a warped fantasy of  three desperadoes on the lam, hiding out in an anonymous Brooklyn flat, presumably under police surveillance but looking for that crack in the blockade that will allow them to escape against all odds. The set-up is a pure pretext – there’s not a shred of dramatic tension to be found in this film that never leaves the confines of the drab, cluttered space they’re confined to. We don’t care about the danger of being arrested, we have no sense of who they are or would be if they were granted the privilege of returning to whatever “normal” life they’d constructed for themselves – there’s no past or future to be contemplated here. Everything that matters is entirely to be found on camera. And for the most part, little if any of it actually matters. So don’t wait too hard, cuz you won’t see too much. 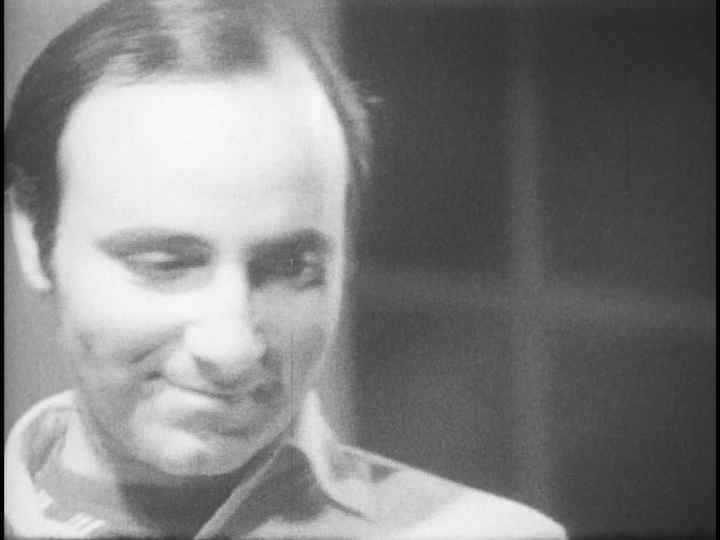 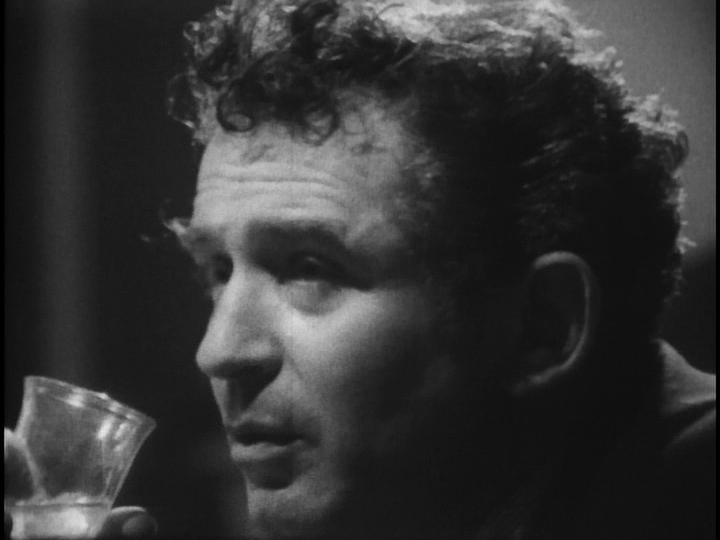 The three characters, besides having names (that’s Buzz Cameo [Farber] on the left, Prince [Mailer] on the right), also have primal archetypal roles to perform in this testosterone ballet. Prince is the would-be alpha male, by virtue of his uninhibited bellowing and grunting, to comical excess. He’s also the most successful at functioning at the highest level of consistent inebriation. Buzz is his muscle-bound sidekick, the hit-man who understands his subordinate status but finds strategic moments to assert his indifference and independence from the ludicrous schemes concocted by Prince and their antagonist/ally 20 Years. 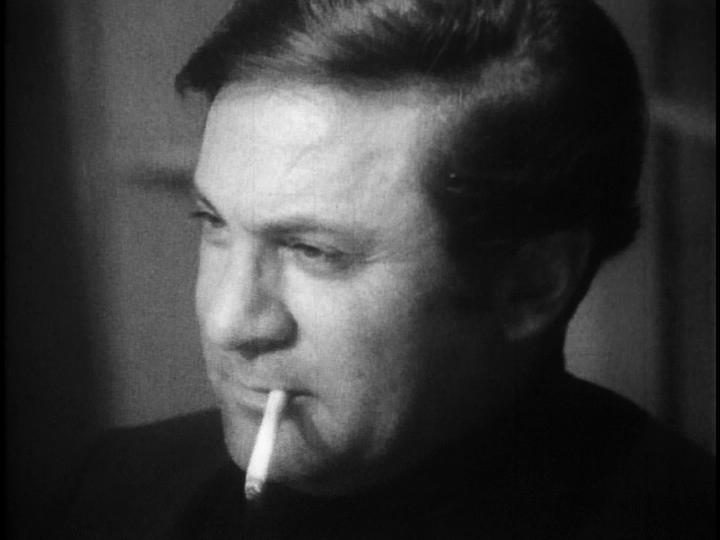 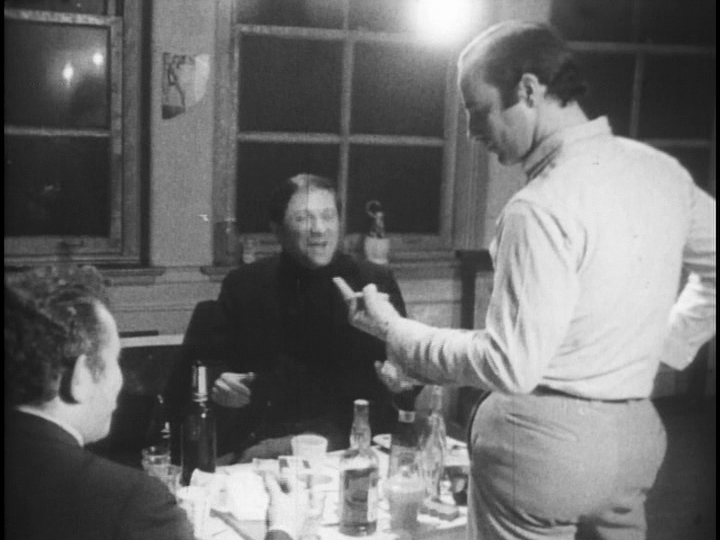 Viewers gets the impression that the apartment belongs to 20 Years (who got his nickname from the virtue accorded a gangster who serves his time in stir without squealing to the law), and that they’ve landed here as some kind of last resort. The sparse furnishings and wide-open exposure render the situation entirely tenuous and explosively unstable. The only sense of abundance that one can detect is in the copious quantities of alcohol the trio have at their disposal, and the overflow of profanity that it serves to inspire. 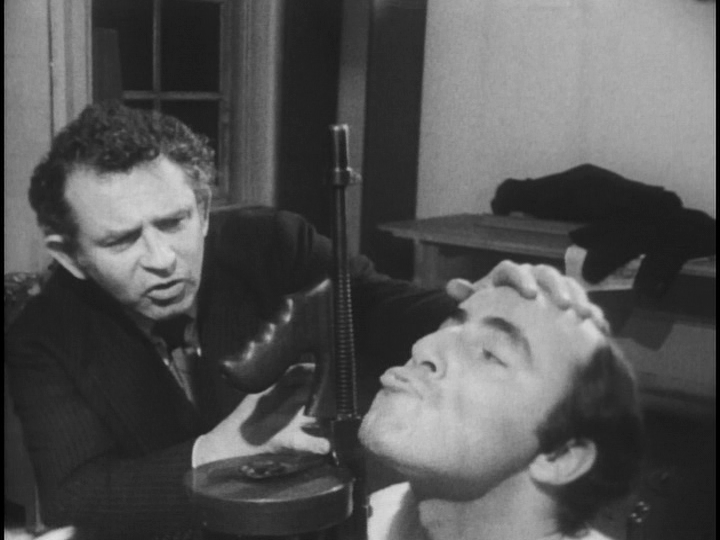 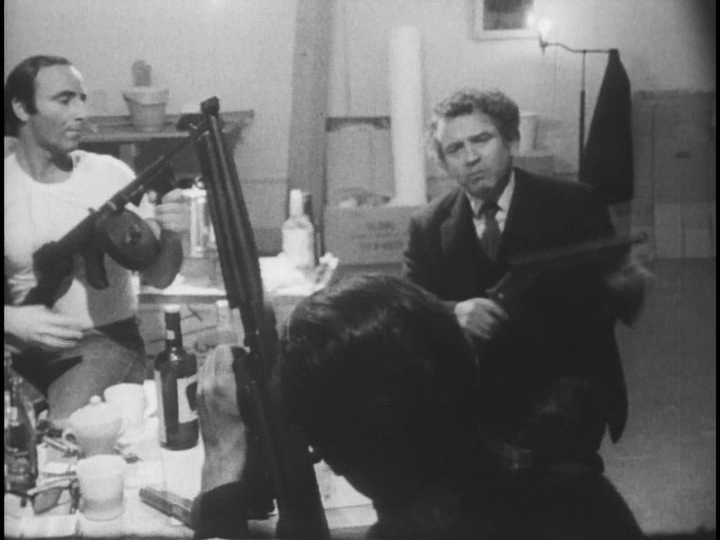 Oh, there are guns too… of course. Unleash the id to this degree, and guns will inevitably find their way in. Sheer force of gravity, it’s irresistible. 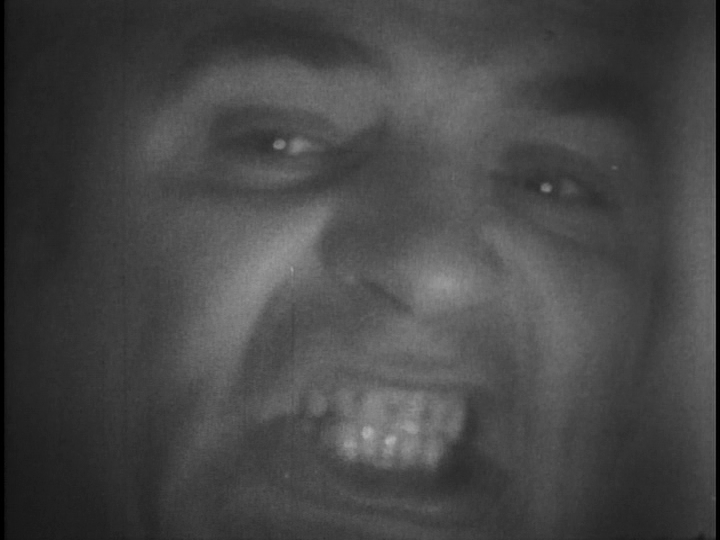 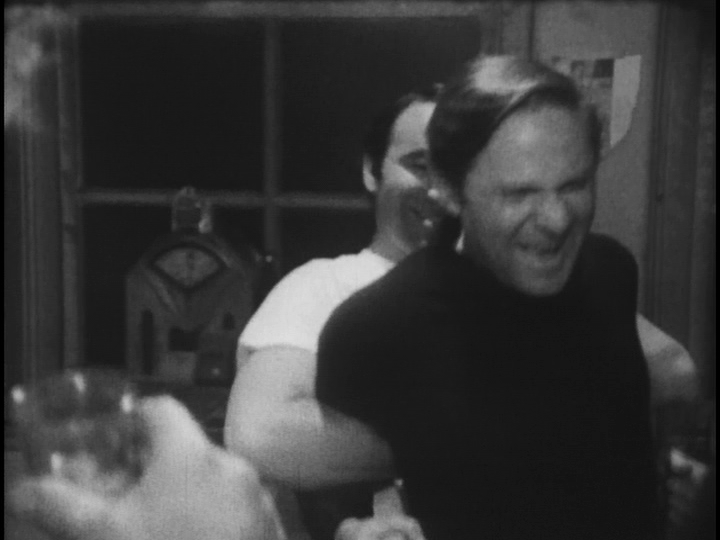 After the actors quickly exhaust their capacity for concocting witty repartee from thin air (Sacha Guitry, these guys are not!) there isn’t much else left when it’s just the three of them except resorting to primal caveman antics and locker-room level horseplay. 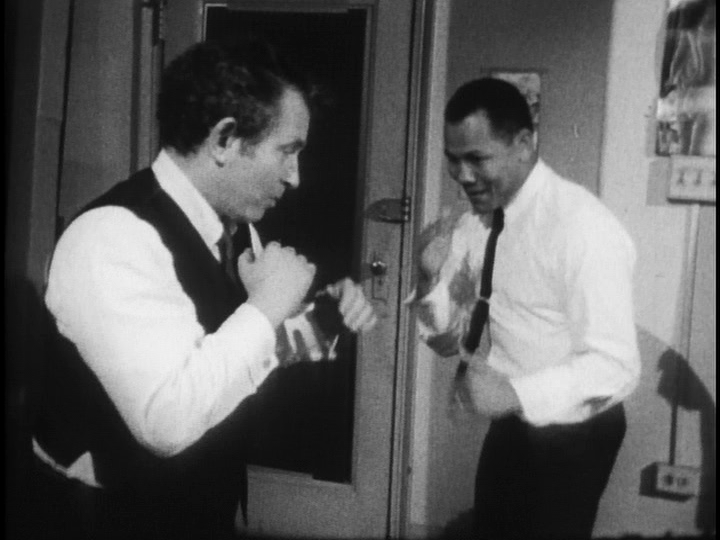 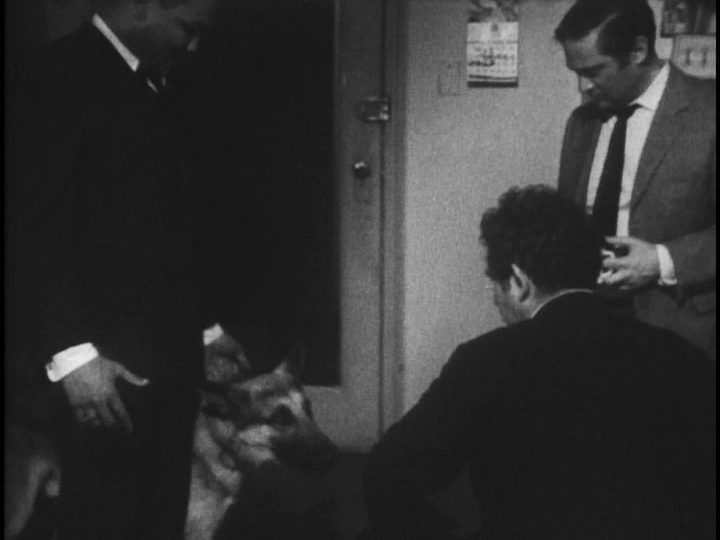 Fortunately for everyone involved, the three-way scrum eventually breaks up, sometime around the midway point, as the hermetic seal on the gangsters’ hideaway is broken by a series of visitors introduced seemingly for the sole purpose of providing some relief and variety. We get a feisty sparring match between Mailer/Prince and former middleweight boxing champ Jose Torres (coincidentally the subject of a short 1959 documentary by Japanese director Hiroshi Teshigahara.) Though Mailer was by this point in life trending toward the pasty end of the muscle-tone spectrum, his passion and study of boxing technique comes through clearly enough as he and Torres joust for fun. And if that display of manliness isn’t barbaric enough, we’re treated to a barking showdown between Mailer and a bewildered German Shepherd. Spoiler Alert: the human wins – simply more convincing, growls like he really means it! 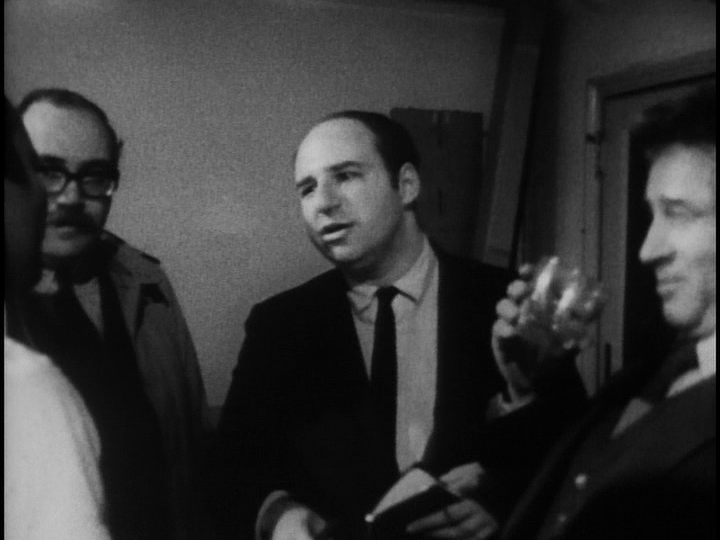 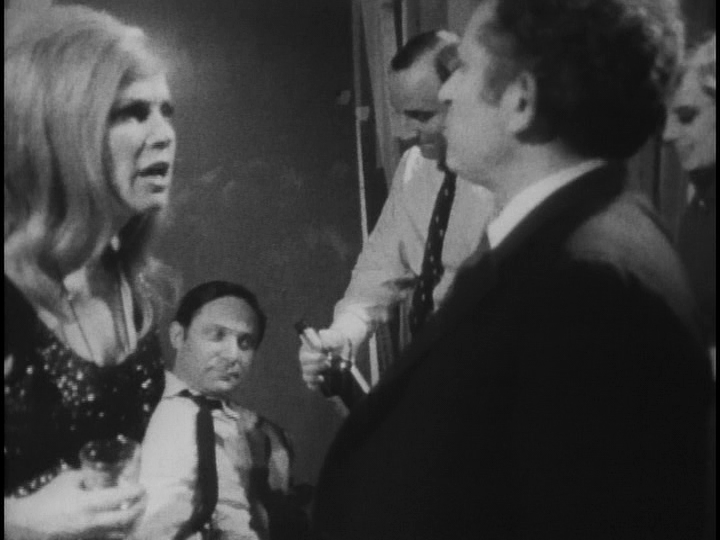 There’s also an obligatory toe-to-toe with the cops who’ve got the mugs squarely in their cross-hairs and pay a visit in order to talk some serious business. The conceit is that they’re trying to strike a bargain with Prince, persuading him to turn in a few of his underling henchmen and by doing so, compromise the most inviolable principle of Wild 90‘s microcosmos: don’t squeal. Of course, the main point of the exercise is to give Mailer an excuse to talk tough shit to the fuzz as he enacts his warped fantasy of what mafioso pride is all about.

The claustrophobic and undeniably self-absorbed affair flails and flounders to its close when Prince’s moll Margie (Beverly Bentley, Mailer’s real-life wife at the time) shows up with a friend to bring some carnal comforts, feminine sass and a coup de grace of inconsequential betrayal into the mix. Bentley’s steely grit does more than provide some welcome gender-balance after more than an hour of macho strutting and kicking around; she effectively lets a lot of hot air out of Mailer’s strenuously over-inflated balloon. In the process, she also inspires Mailer to an improvisational poetic peak, cited by Pennebaker at the end of the clip I linked to at the top of this column.  His impromptu paean is indeed a vital little gem of a moment in a film overly saturated with masturbatory in-jokes undoubtedly funnier to the inebriated tellers than to us, the cold-sober listeners. Still, I’ll take Wild 90 for what it is, an invigorating, unhinged snapshot into the vital anarchic spirit of 1967, left for our perusal by a cultural linchpin of the era. 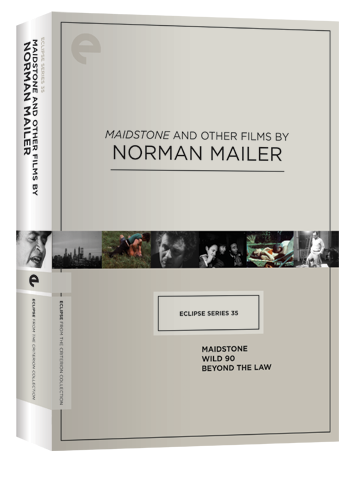 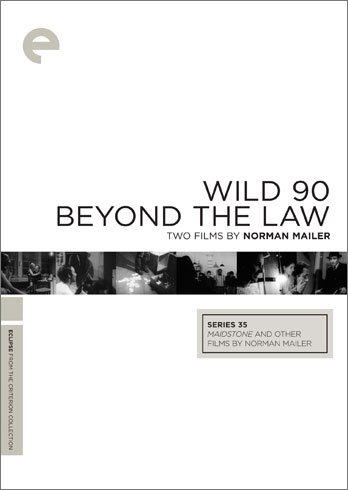