A Journey Through The Eclipse Series: Samuel Fuller’s The Steel Helmet

Don’t let your emotions get the best of you.

Dead man’s nothing but a corpse.

Nobody cares who he is now.

I opened up this Journey Through the Eclipse Series by stating in my first column that when given the choice of a film to watch, I’m not too likely to pick out a war movie. But here I am, just three weeks into this new effort, with the entire Eclipse catalog of nearly 90 titles at my disposal, and what do I do? I’ve selected another film dealing with military matters! My reason for this is that I aim to make these reviews timely and topical whenever possible. As the 60th anniversary of the Korean War’s outbreak draws near, I’ve been hearing rumblings of a new escalation in the armed conflict between North and South Korea, based on the recent sinking of a South Korean navy ship and a host of other indicators that Kim Jong-il is feeling more belligerent than usual toward his estranged countrymen. Even though nothing more than a few bursts of inflammatory rhetoric and a higher-than-usual stage of alert have been noted by foreign observers, Korea is definitely one of those geopolitical tinderboxes that could go up in flames at a moment’s notice. So I thought, why not take a look at a film that was written, shot and released in the very early stages of the original Korean War to see what kind of insight it sheds on this long-simmering feud? I think it’s safe to say that more Americans have had their popular impression of what that war is really about through watching M*A*S*H than through in-depth historical studies. I won’t offer that kind of fact-based insight here – I’m just directing your attention toward a different media source, the very first Hollywood movie (maybe the first movie of any kind) to specifically deal with the American intervention in Korea. 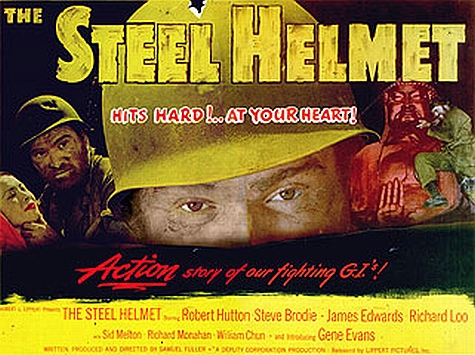 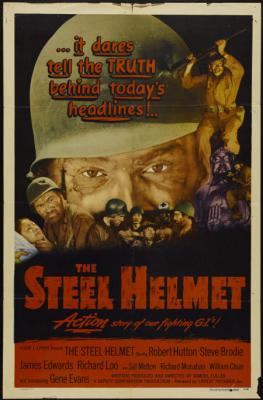 As it turns out, The Steel Helmet says a whole lot more about the American infantryman’s perspective on war in general, and not all that much about the issues that drove the two halves of the Korean peninsula apart. It was shot on the cheap, in a hurry, with little attention given to the big picture. The basic assumptions of “commies are the bad guys, kill ’em before they kill you” holds true throughout, indicative of the mindset drilled into warriors of all eras. My expectations that the film might shed light on today’s or tomorrow’s headlines remain unfulfilled, but The Steel Helmet hardly fails to disappoint as a rough and rugged examination of what keeps a soldier trudging forward when death and confusion seem more likely to greet him than anything more pleasant to contemplate. It probably won’t go down as one of the most impressive wartime epics you’ll ever see – too many big budgets and top rank talents have labored on these themes for The Steel Helment to be include in those ranks – but it deserves a place of honor within the genre because of the bravery shown by writer, producer, and director Sam Fuller when he put this project together. 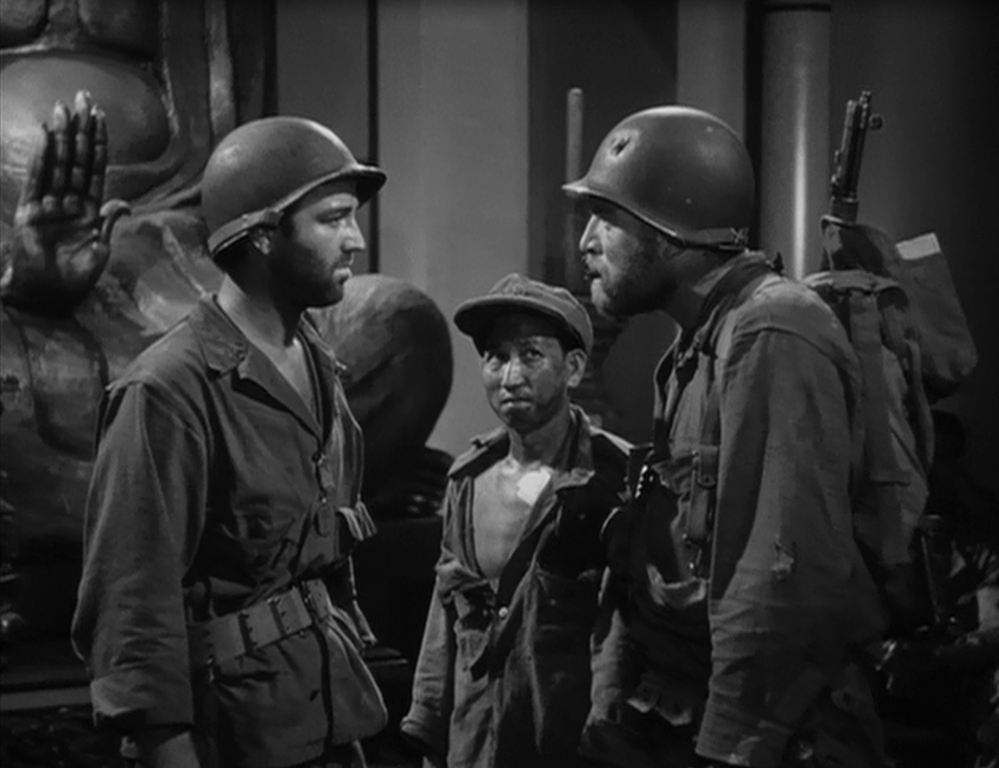 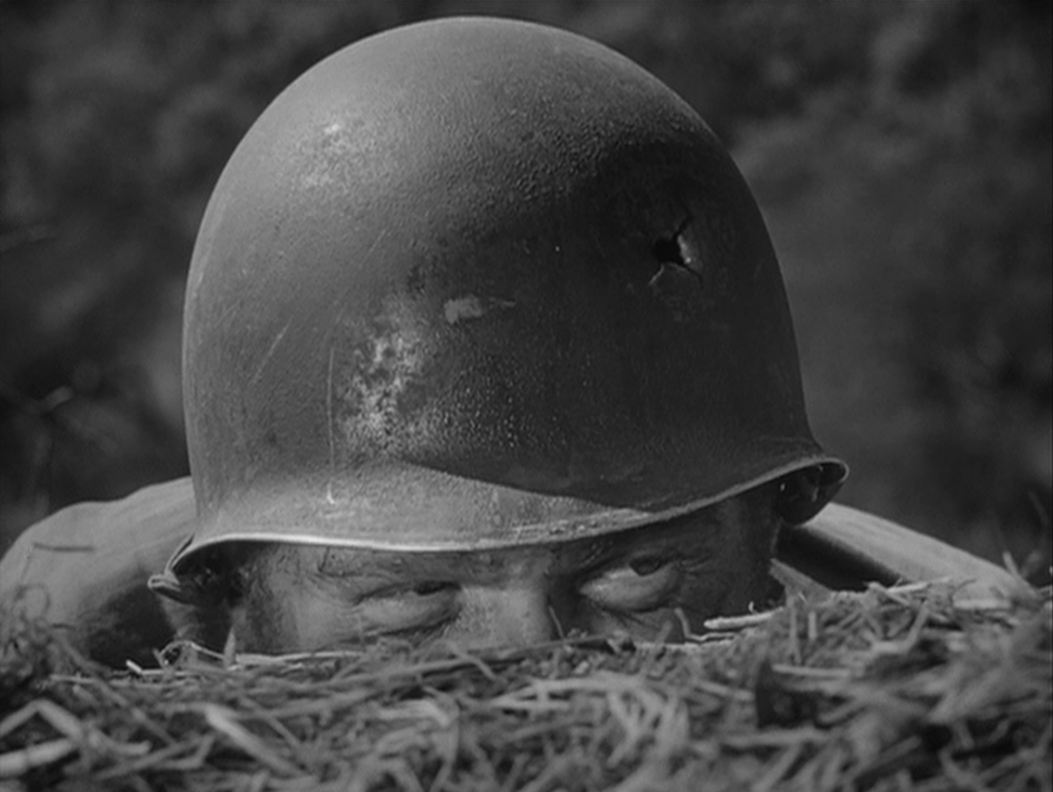 The Steel Helmet tackles issues of race, of American ethnocentrism and the jumble of tormented emotions stirred up by long stretches of duty on the front lines. The film primarily focuses on a single soldier, Sergeant Zack, as tough a two-fisted, cigar chompin’, stubble-faced, hard-headed mug as you’d ever want to have at your side when the firestorm erupts. Zack makes a memorable entrance to open the film, peering warily over a ridge, his helmet pierced by a bullet that just missed splitting his skull when his company was slaughtered in a North Korean ambush. Left for dead, Zack turns out to be the sole survivor, and might not have made it much further than the small hill he wriggles over, bound hand and foot, crawling like a worm toward a knife he intends to use to free up his limbs. A young boy, all alone and carrying a rifle, walks down the road, refusing to fall for Zack’s possum act. Lucky for Zack, the boy is a South Korean, neither the “gook” nor the “dog face” that Zack assumed him to be. Nicknamed “Short Round” (a bullet that doesn’t go all the way) by Zack, the boy takes a liking to this hard-boiled Yank, despite Zack’s efforts to shake him off and reconnect with his fellow soldiers without being hindered by child care duties. When it gets down to it, the grizzled retread, a vet of World War II and now the Korean “police action,” has a softer spot for the poor little orphan than he’s ready to admit, even to himself. He knows it’s almost certain death for Short Round unless he can help find some friendly goo- … that is, South Korean – hands to pass him along to. 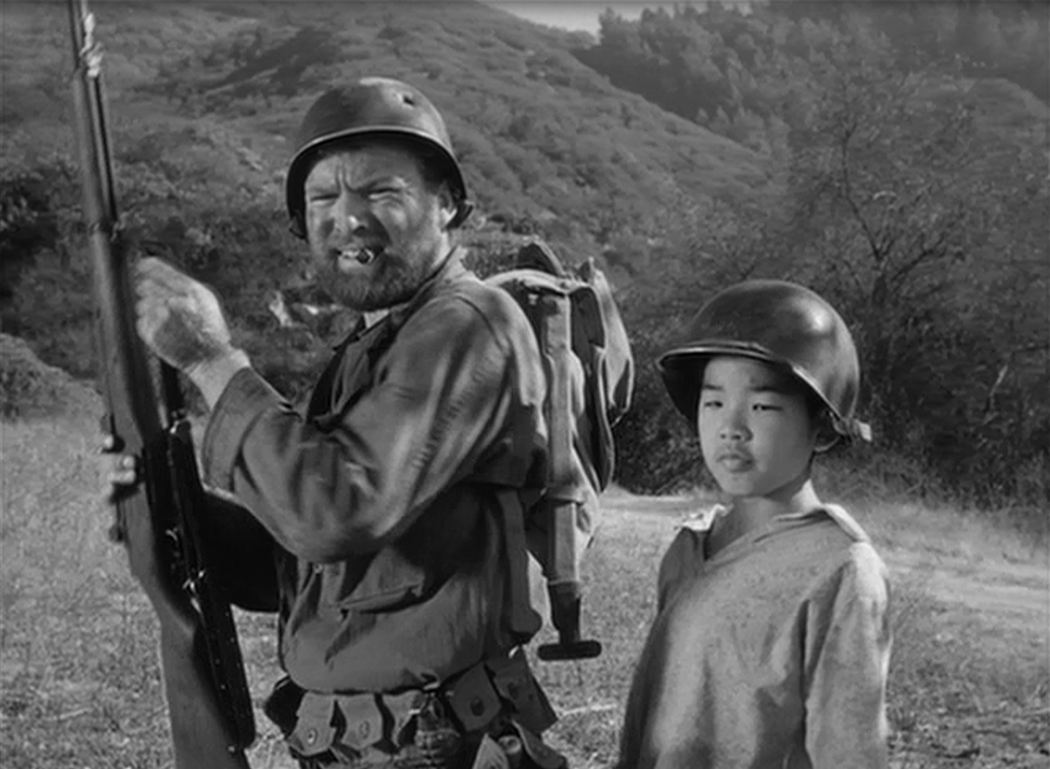 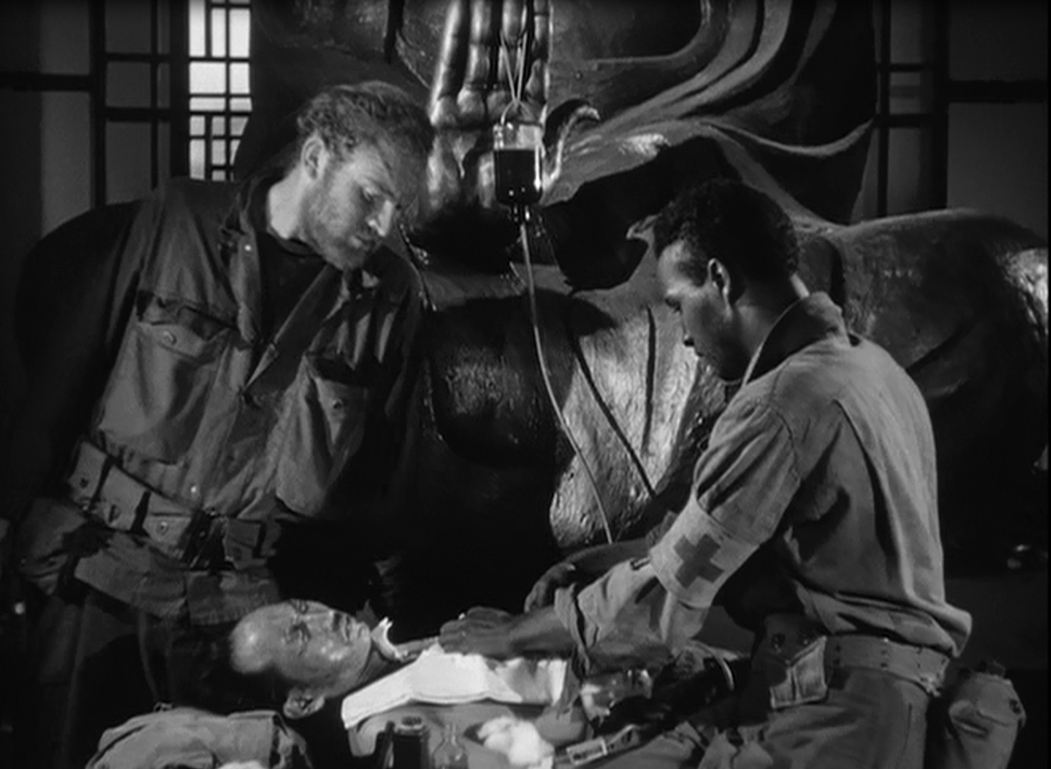 Along the way, Zack and Short Round link up with the remnants of other massacres and patrols gone awry. A black medic, a Japanese sergeant, a lieutenant whose passive-aggressive rivalry with Zack jeopardizes the safety of everyone, a conscientious objector, a bald kid who lost all his hair from a childhood fever. It is indeed the epitome of the “fouled”-up outfit just hanging on for dear life either until help arrives, or it just doesn’t matter anymore. The fact that their personality differences would never draw them together at all in a civilian setting hardly makes a difference in such circumstances. This clip gives you a chance to meet the fellas that you’ll be spending most of your time with, should you choose to try The Steel Helmet on for size:

Fuller’s interest in bringing cross-cultural biases and blind spots to the surface is what made this film truly distinctive and surprising to me. There’s no shortage of gritty combat scenes, senseless deaths and heroic valor under duress – but such attributes are pretty much expected in truly worthy war flicks from just about any era. Fuller takes the familiar plot line of outnumbered, out-gunned soldiers making a bold stand against withering odds in new directions as he explores the racial and ethnic hostilities that simmer under the surface in an army that’s struggling with uncomfortable and unprecedented degrees of integration – not to mention the sheer necessity for cooperation in order to survive the enemy hostilities. A short interlude involving the familiar ballad “Auld Lang Syne” may surprise some viewers when they discover how Koreans regard the tune, but I was instantly reminded of Twenty-Four Eyes(1954), among numerous Asian films of this time that also made free use of traditional Western songs. More than just an amusing curiousity, Fuller informs his audience that the invisible walls that isolated and segregated societies before the wars are now crumbling, whether we’re ready for the culture shock or not. 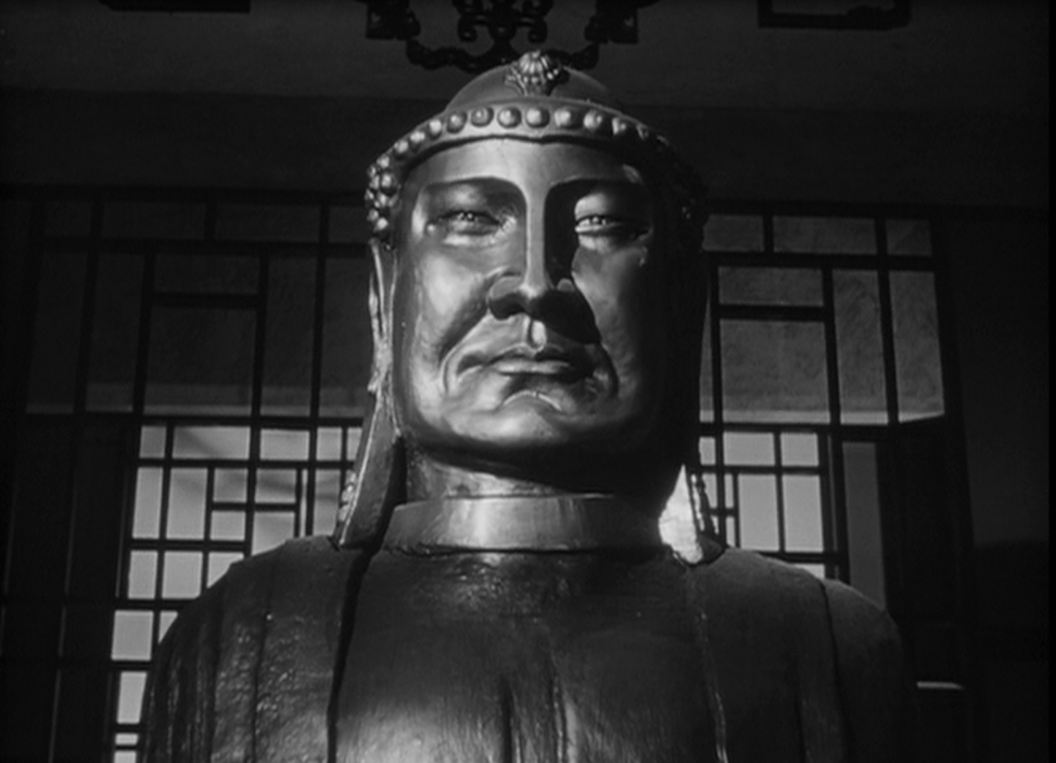 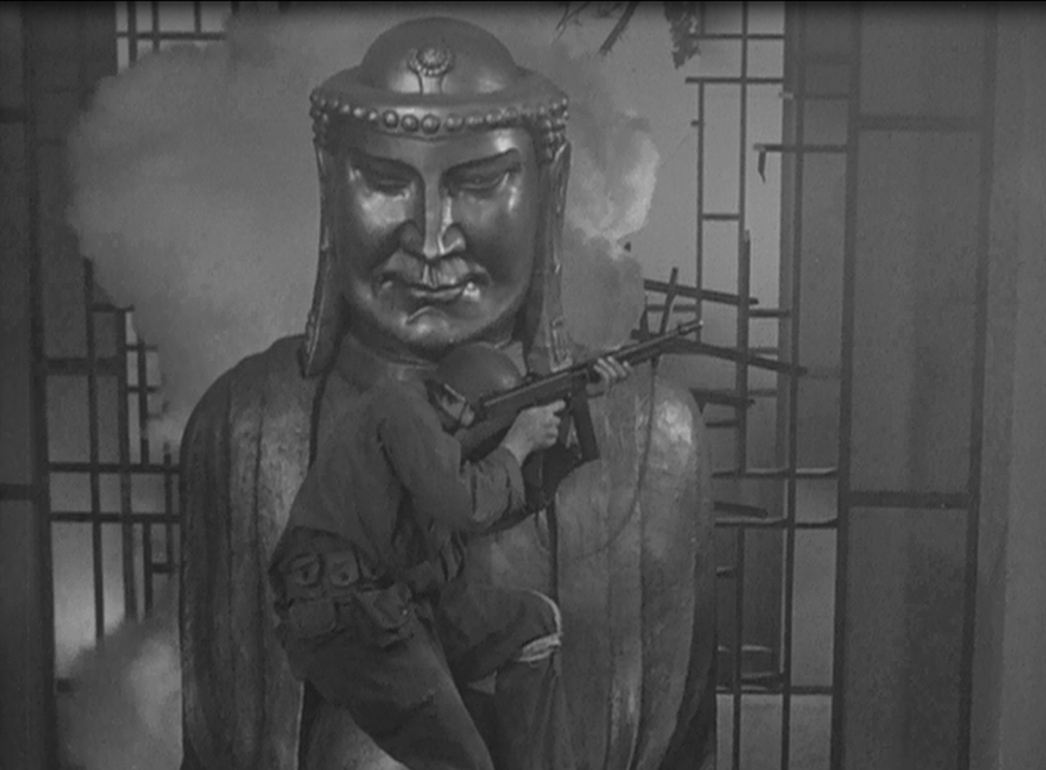 On top of all that, ideological tensions of both political and religious varieties also crop up as the soldiers take shelter in an abandoned temple. A giant Buddha statue (really, it looks more like what an American design team under a short deadline imagined the Buddha would look like) looms imposingly over all the calamities that take place in the temple, as each of the characters, including a hidden enemy in their midst, take their turn at consciousness-raising encounters that call each man’s assumptions (and the viewer’s) into question, even if they fail to lead to full-fledged “diversity awareness” by today’s standards. I can’t say with certainty that this was the first American war movie to press these hot button issues so vigorously, but Fuller’s direct approach was clearly ahead of its time, blunt and unconventional enough to draw unwanted attention from the F.B.I. It seems that J. Edgar Hoover was curious to know if Sam Fuller’s credentials as a loyal American were tarnished in any way. This is not your by-the-book, chest-thumping flag waver of a war movie, even though John Wayne was briefly considered for the lead role before Fuller made it clear he’d have none of it. He sought the freedom to tell his story, his way, without having to work out from under the jingoistic burden that an actor of Wayne’s stature would lay over the production. 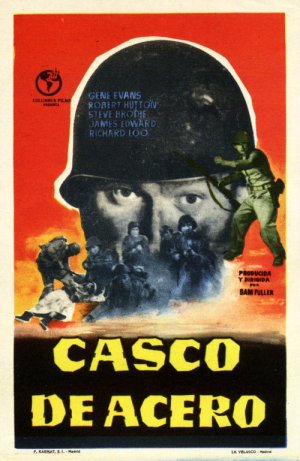 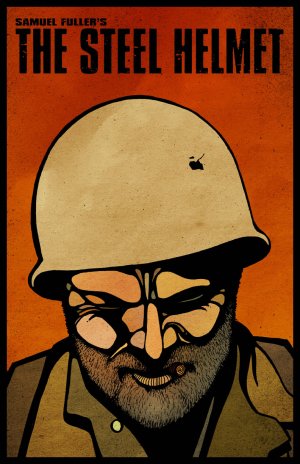 The Steel Helmet offers up plenty of evidence to confirm its B-movie origins, with obvious incorporation of grainy stock footage during the battle scenes and a generally boxed-in feeling that reflects the backlot sets and nearby SoCal hillsides where the movie was shot. The highly quotable dialog is full of rough-edged sentiment and dark humor: “If you die, I’ll kill ya!” “He’s South Korean when he’s running with you. He’s North Korean when he’s running AFTER you.” “If I was right all the time I’d be an officer, Lieutenant.” A lot of these anecdotes were gathered by Fuller himself, based on the diary he kept in his own combat experience in the 16th Infantry Regiment, the same assignment drawn by Sgt. Zack.

This probably serves as a good-enough introduction and recommendation to check out The Steel Helmet for yourself whenever you’re in the mood for a tough-hearted, intelligent two-fisted tale. It’s part of Eclipse Series 5: The First Films of Samuel Fuller, a vintage collection of previously hard-to-find works that the great American auteur crafted when he was just emerging into the Hollywood film industry. From these seminal productions, shot with low budgets, no-name casts and ridiculously accelerated time-tables (three weeks of shooting for this particular title), Fuller went on to fearlessly blaze new cinematic trails for the next three decades. He’s a Criterion favorite, of course, with four other films (Pickup on South Street, Shock Corridor, The Naked Kiss and White Dog) in the Collection, and a famous cameo in Jean-Luc Godard’s Pierrot le Fou. I think it’s always a good idea to see where the great ones started their journey, and The Steel Helmet is the film that really put Sam Fuller on the map. 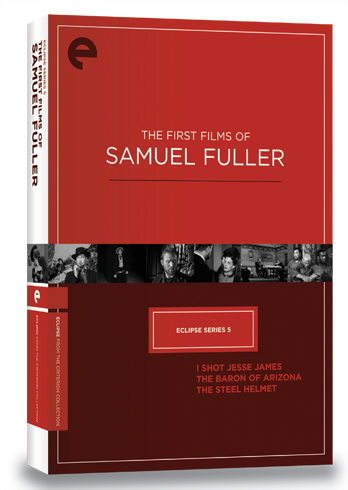 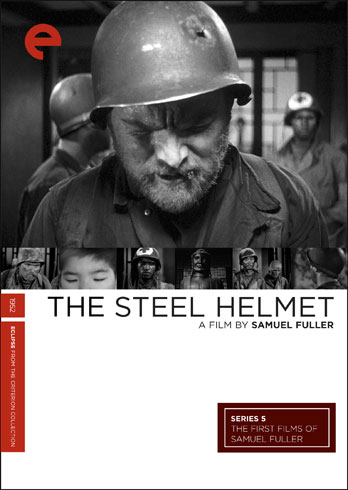