A Journey Through the Eclipse Series: Up All Night with Robert Downey Sr.

I finally got around to seeing The Avengers this weekend. Even though I’m usually content to let these summertime spectacles pass me by, my youthful interest in Marvel Comics and the Avengers series back in the 1970s provided a useful point of connection, and of course I’ve noticed the tidal wave of positive reviews the film has generated even among my select circle of Criterion aficionados. The movie was fine, I had fun watching it and appreciated the well-crafted script and impressive special effects. That’s about all I have to say about The Avengers for now, but since I went into the theater having already watched most of the films in Eclipse Series 33: Up All Night with Robert Downey Sr., I was particularly focused on the performance of Robert Downey Jr., who’s established himself over the past few years as our current-day equivalent to Harrison Ford for his ability to master prominent roles in two highly successful blockbuster franchises, the other being the Sherlock Holmes series. Though it may be a stretch to say that Downey Jr. is Hollywood’s preeminent leading man at the moment, it’s also hard to come up with anyone who clearly surpasses him in that regard. And considering what I learned about his father in watching the audacious, iconoclastic  movies he unleashed in the 1960s and 70s, I find that generational leap from anarchic counter-cultural rabble rouser to staple of the suburban cineplex scene pretty remarkable. Not to mention the stark contrasts between father and son’s financial compensation for the entertainment services they provide… 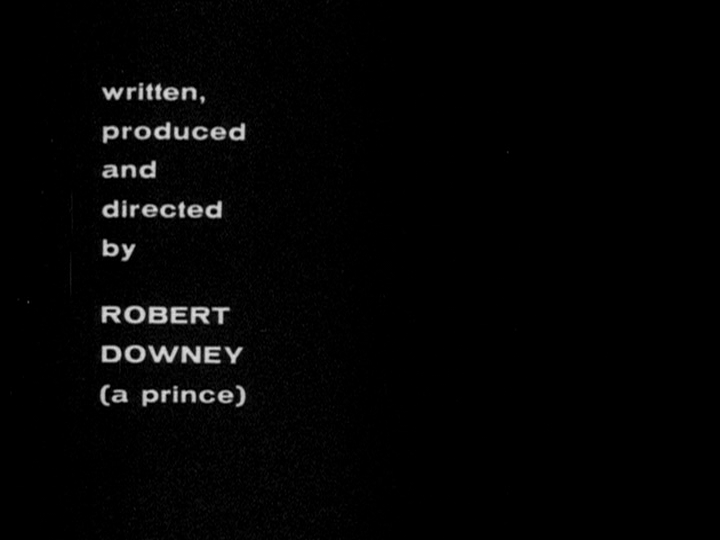 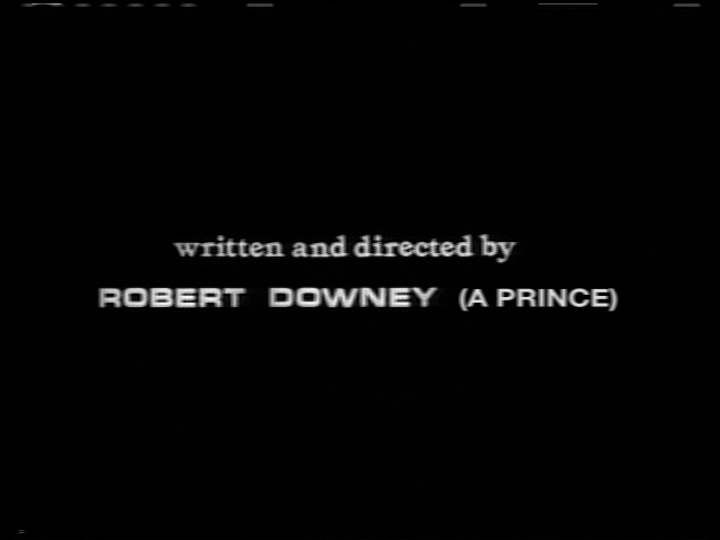 Even though the new Eclipse set is one of the two slimmest volumes released in that series so far (just two discs, matching the Larissa Shepitko box), it packs quite a wallop, shattering taboos and wreaking havoc with racist and sexist stereotypes that are alternately flaunted and subverted with pugnacious bravado. The films all move along  quickly, with four of the five clocking in just under  the one hour mark and the other not quite making it to an hour and a half. The brevity helps, since  considerations like  plot, character development and narrative resolution are  not part of the bargain that Downey Sr. strikes with his audience. Any lengthier time commitment would probably prove frustrating to most viewers, but if you are one of those who can’t quite get enough of this stuff, just go ahead and hit the repeat button, there are sure to be some gags you missed the first time, or will chuckle at even more after the initial delirium of first exposure to Downey’s fusillade wears off.

What they  offer, either in small isolated doses or in their cumulative impact if, like me, you decide to plow through the whole set in a short span of time, is a rapid fire blast of blunt, free-wheeling social satire, the kind of caustic profane humor that erupted in the 1960s, delivered with a freshness and exuberance that’s been hard to recapture and imitate ever since. A big part of the charm of these films is how effectively they convey the spontaneous sense of uninhibited experimentation that swept across North America and Europe in that convulsive decade. Revolutions of all sorts were taking place during the years these films were made, and each of them  provide exemplary artifacts of the DIY aesthetic of their era. Make no mistake, Downey Sr. was an obscure bit player on the outer fringe of popular culture back then, though not without his influential advocates in trend-setting New York circles who helped to give him a platform to eventually reach the masses. He didn’t set out to be a chronicler of his times, he was just one of many rambunctious passengers along for the ride, eager to tweak the system and have more than a few sarcastic laughs along the way. 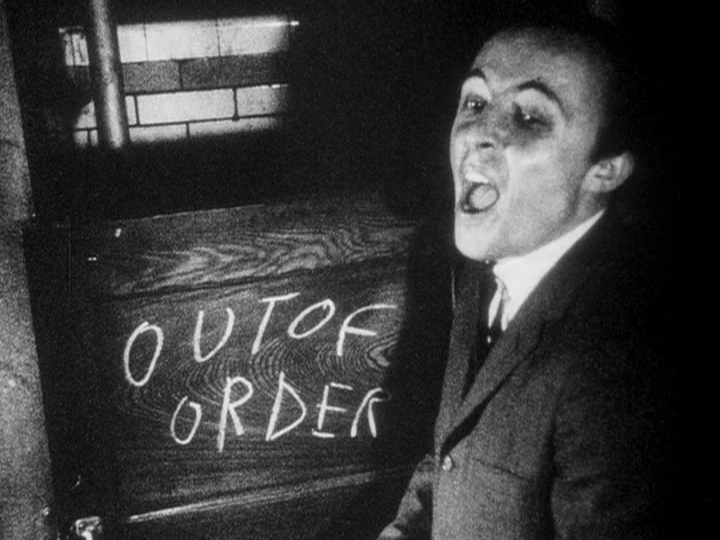 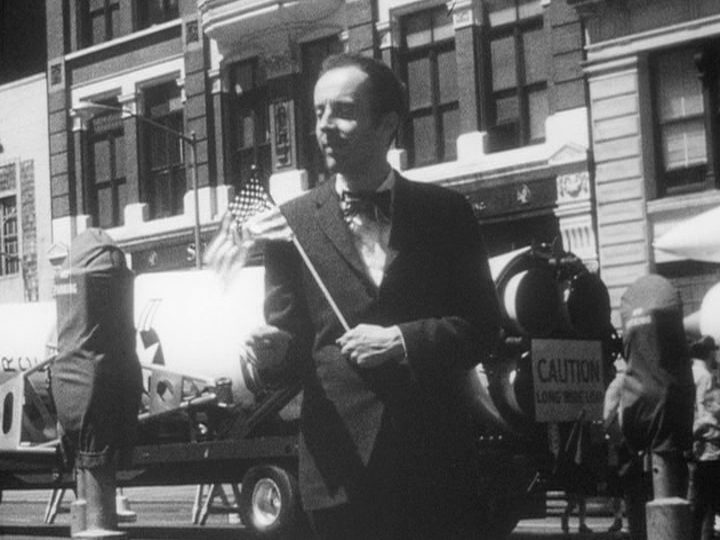 Babo 73, the earliest film in this set, combines elements of vintage Cold War political satire reminiscent of Dr. Strangelove (but with infinitely cruder production values) and oddball beatnik wackiness, primarily through the performance of Taylor Mead, a New York art scene fixture over the past fifty years or so, appearing in films directed by Andy Warhol and Jim Jarmusch among others. Mead plays Sandy Studsbury, a histrionic hand-wringer who somehow winds up as President of the United States in an alt-universe 1973, ten years into the future from when the movie was made. He’s surrounded by a cabinet of maniacal advisors who each take turns demonstrating their ineptitude at resolving international crises involving Albania and the “Red Siamese.” What sets this one apart from the other  low-budget skit-driven films in this collection is Downey’s ballsy incorporation of location shots at Washington DC’s most famous monuments – the White House, the Lincoln Memorial and so on,  obtained while President Kennedy was  traveling  – along with some shameless exhibitionism that uses real-life military parades and other public settings as the backdrop for stunts that today’s security standards just wouldn’t allow any more, whether or not the POTUS was in town. 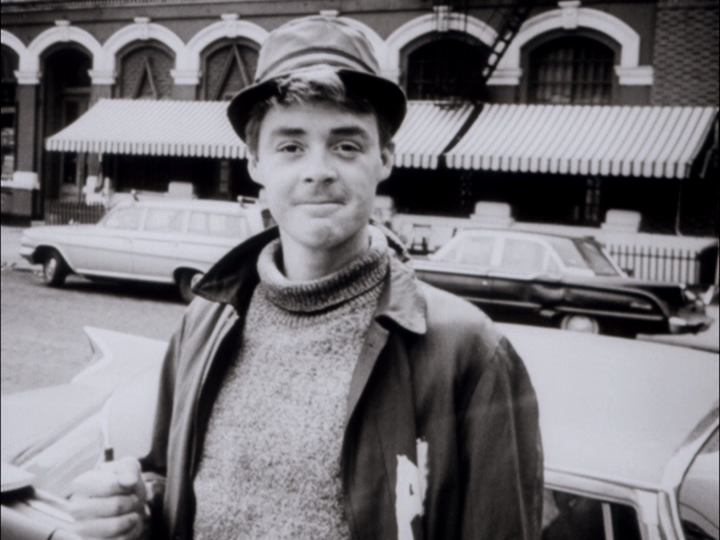 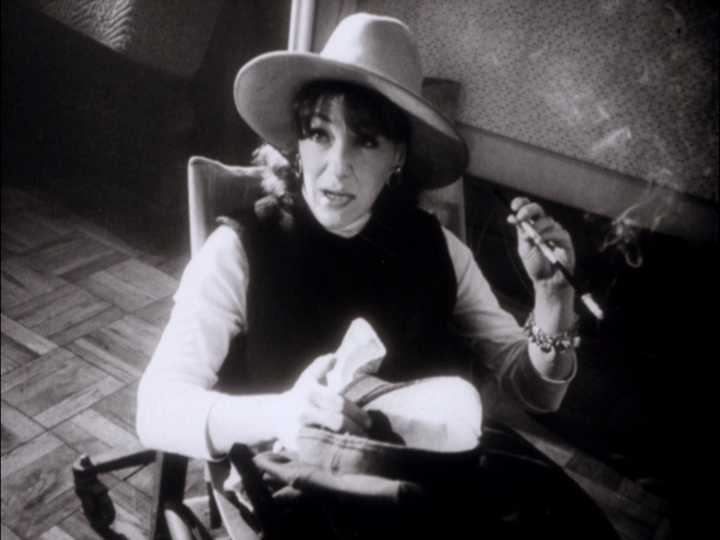 The next title, Chafed Elbows, released in 1966,  sets aside the politics in favor of a skittering  focus on the rapidly shifting sexual mores and neurotic whiplash triggered by all the changes going down at the time. It’s a first-person narrative about Walter Dinsmore, a hapless nobody who’s enmeshed in some kind of incestuous mess with his mom, claimed as an object of random street art and befuddled victim/patient of a therapist as clueless and confused as you’re likely to be the first time you sit down to watch these reels unspool themselves. Detectable influences of Chris Marker’s La Jetee and Stan Brakhage’s avant garde rapid-splicing techniques spice up the cinematic mix, and we’re also treated to the versatile, you  could say schizoid, performance style of Elsie Downey, Robert Sr.’s first wife and Robert Jr.’s mother. 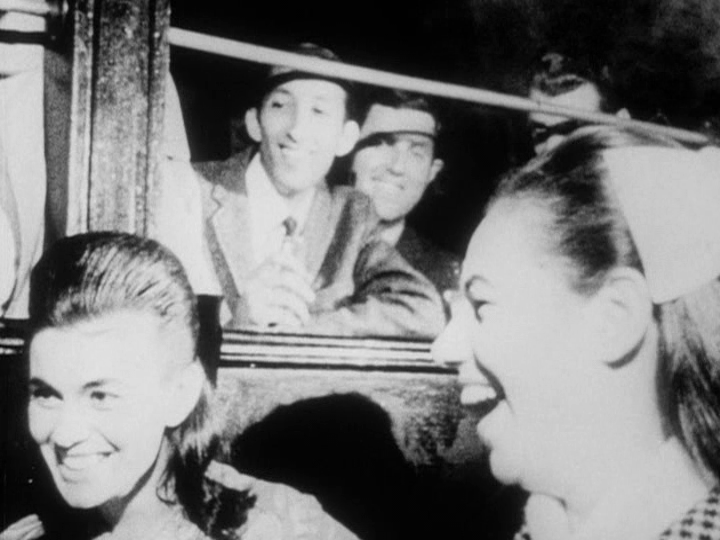 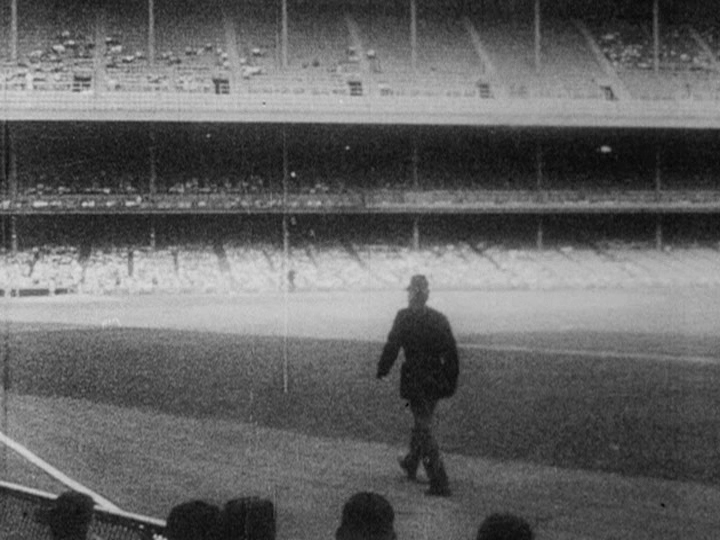 1968’s No More Excuses is the rarest offering in this collection, as only one surviving print of the film can still be accounted for. It’s actually a hodgepodge of an older work, Downey Sr.’s first, titled Balls Bluff, about a Civil War soldier mysteriously transported forward in time to the present day, and what appear to be a few other half-baked ideas roughly woven into a haphazard structure.  Basically, we jump tracks between a straight-on talking head declaring a manifesto of sorts for SINA (the Society for Indecency to Naked Animals), an intended-for-TV documentary on New York’s downtown singles bar scene (including a few interviews shot in and around the original TGI Fridays), a historical recreation of the assassination of President James Garfield and some rough transgressions involving a lecherous priest and his ambivalent stalking victim. A real crazy quilt mockery of middle class America and its hang-ups, reminiscent of early Mothers of Invention-style humor, that turns out to be quite hilarious as we listen to some choice quotes from men and women in the street and watch Robert Downey Sr. stroll out into the middle of a live baseball game in Yankee Stadium dressed in his own Yankee uniform, all to a rocking vintage soundtrack featuring Cream, The Who, Janis Joplin, The Hollies, The Monkees and more. For some reason, I have a hunch that royalties for the use of all that classic rock were never paid. The bands certainly don’t get a mention in the ending credits… times (and intellectual property litigation) were different back then, I’m just sayin’. 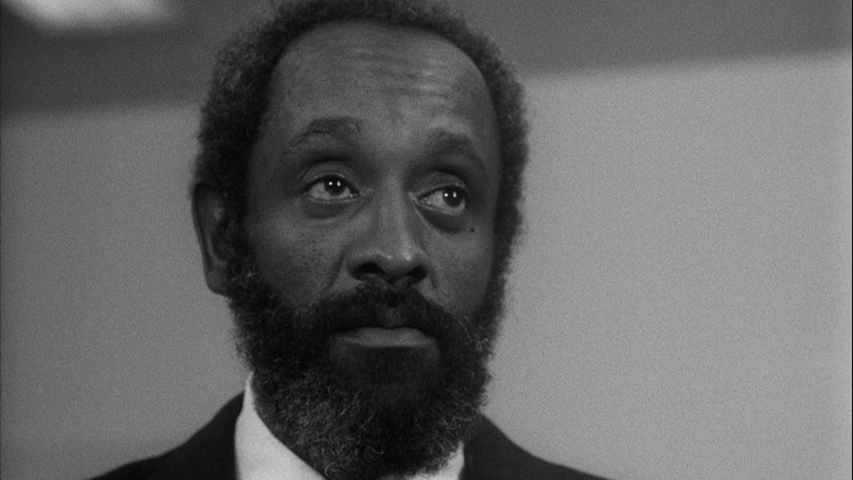 Moving on to Disc Two, we get Putney Swope, the magnet film that will motivate most of the purchases of this set. There’s no debate over the fact that this is the most professionally produced movie of the bunch, shot in widescreen ratio and successfully weaving most of Downey’s extraneous gags and random wisecracks into a relatively coherent storyline. The plot concerns an African-American executive who’s unexpectedly thrust into the chairmanship of a powerful ad agency and transforms his corporate culture along the lines envisioned by late 60s Black Power militants. Downey was inspired by a real life incident involving the kind of race-based discrimination that Chairman Swope unflinchingly reverses once he has the power. Using commercially unacceptable demo advertisements he made for a local production company, Downey spikes the punch with material sure to appeal midnight movie audiences (slow-mo bouncing boobs, President and First Lady midgets collapsing into fits of stoned laughter, lots of profanity and salaciousness dropped in for shocking effect.) Gestated in the same primordial swamp that spawned the early phases of the National Lampoon and venerable ancestor of later classics in this genre like The Groove Tube and Kentucky Fried Movie, Putney Swope still has a lot to relevance for 21st century viewers in its biting send-ups on race, money, sex and power in the upper reaches of the business world. 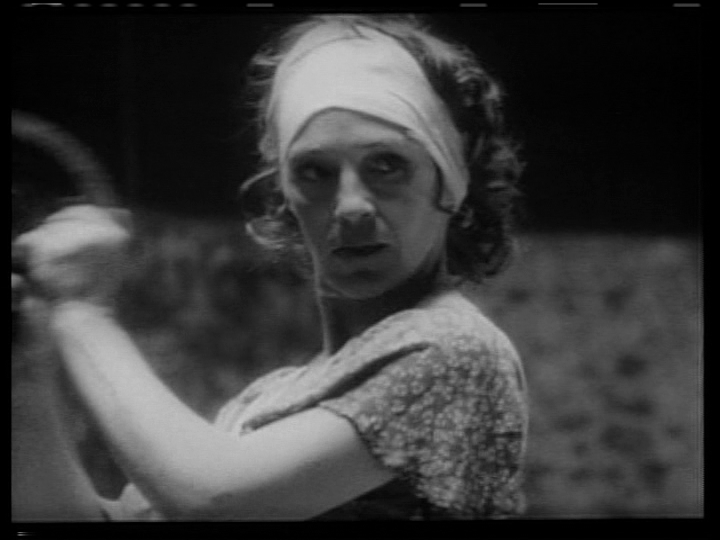 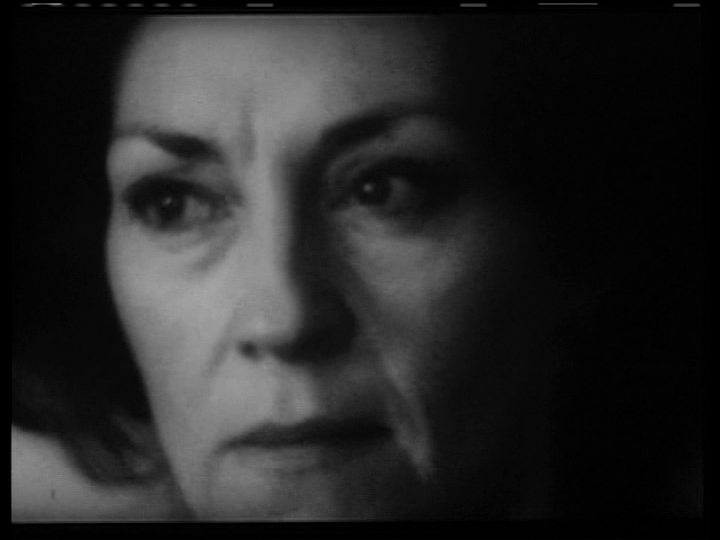 Finally, we’re left with Two Tons of Turquoise to Taos Tonight, an inscrutable, amorphous concoction of scattered bits and pieces that somehow fall together through Downey’s sheer force of will. At least, that’s the only explanation I can come up with, since most of the segments have little or nothing to do with whatever precedes or follows them. To call this sketch comedy is an overstatement, since many of the scenes are so extremely short, just a few seconds long, consisting of bizarre statements, reaction shots or favored snippets that Downey cobbled together for reasons perhaps even unknown to him at the time. The film, originally titled Moment to Moment (quite fitting, I will add) had never quite settled into a finished form, but here we’ve got what will likely become the definitive version, with a new title and some judicious trimming that Downey did himself specifically for this release. I won’t begin to try to suss out a cohesive thread from its story elements; the real star of this show is Elsie Downey, who once again portrays a bewildering variety of female roles. Her brave demonstrative antics on screen definitely reveal major clues as to where her son got his own exhibitionist tendencies (and from the potent combination of his intensely creative parents, inherited a lot of the emotional volatility that led to his youthful struggles with addiction and self-destructive urges.) Look closely at Elsie’s gaze, the way she cocks her head at so slight an angle – you’ll see glimpses of the affect and persona that Robert Jr. uses to such great effect in connecting with a wide swath of fans who would likely be pretty astonished at much of what they see going on in his parents’ glorified home movies.

Up All Night with Robert Downey Sr. takes the Eclipse Series in a whole new direction, introducing a vein of tripped out psychedelic craziness into what’s generally been a rather dignified and classically oriented collection of films. It’s a refreshing change of pace, and these are discs that I’ll be revisiting both here for this column, where I can break them down in a bit more depth over the months ahead, and whenever my inner Yippie anarchist nudges my ribs and tells me he’s feeling neglected and hungry. There’s plenty here to satisfy my cravings for some midnight movie madness.