A Journey Through The Eclipse Series: William Klein’s Mr. Freedom

F-R-double-E-D, D-O-M spells Freedom! We fight for freedom, for one and for all!

Another Independence Day has come and gone in the USA, but before we bundle up the bunting, furl up the flags and blaze that last pack of firecrackers, let’s take a few minutes to celebrate the meaning and grandeur behind all that traditional hoopla: I’m talkin’ about FREEDOM!

Yeah, FREEDOM, that wonderful essential quality of life we all enjoy here in America, unique among the nations in granting FREEDOM as a birthright to its natural born and duly assimilated citizens. FREEDOM, that allows us to choose our own destiny, chart our own course, shrug off the rules that don’t apply to us and righteously snuff out any and all tyrants that dare to stand in our way. FREEDOM! Our forefathers caught it, we inherited it and we aim to spread it around as far and as wide as our FREEDOM-loving loins allow us to roam! FREEDOM – it’s that sound of the drumbeats of liberty you hear, approaching, rumbling, pounding in the distance… it’s the sight of millions of disciplined individuals all marching in lockstep, determined to make everyone else free just like them! …it’s the undeniable, irresistible power that overwhelms and subjugates all who dare obstruct FREEDOM’s path! And FREEDOM has a champion – and that Champion’s name is… MR. FREEDOM! 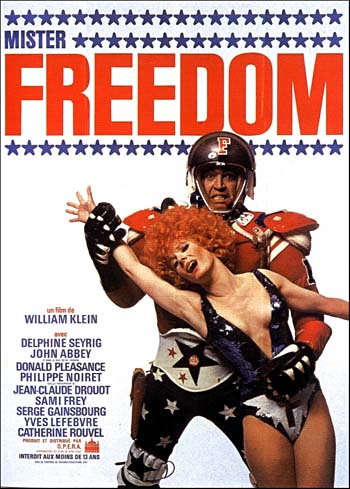 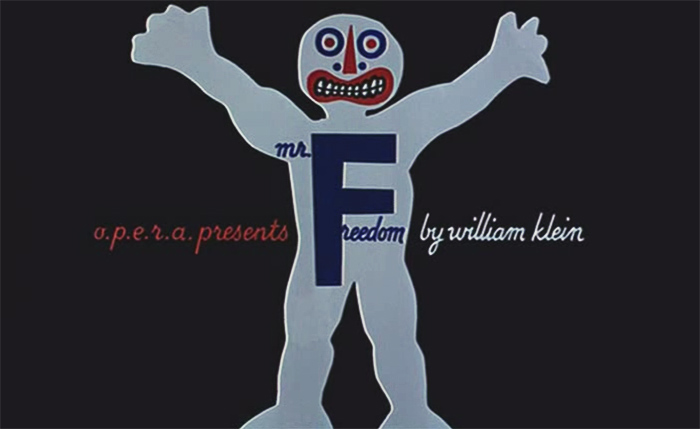 If all that rhetoric kind of has your head spinning and your ears ringing, don’t worry, that’s the effect I was trying to induce. A brief period of disorientation, where words cease to have meaning and all that’s left is knee-jerk stimulus/response, helps us make the necessary adjustments that allow entry into the world of Eclipse Series 9: The Delirious Fictions of William Klein. This set contains three films created in the 1960s and 70s by an expatriate fashion photographer who emigrated to Paris and spent the majority of his film-making career creating documentaries on subjects like Muhammad Ali and the French Open tennis tournament. I’m thankful that William Klein found the time and resources to put his vivid visual and satirical imagination into these unique, vibrant features. Mr. Freedom, from 1968, captures the radical, revolutionary energy of that pivotal year, incorporating documentary footage from Parisian street riots and kitschy advertising pastiche into a wicked lampoon of right-wing Cold War jingoism at a time when it seemed just possible that the whole edifice of Anglo-American imperialism might collapse in on itself due to youth-fueled resistance from within. 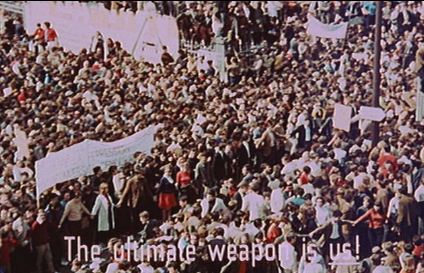 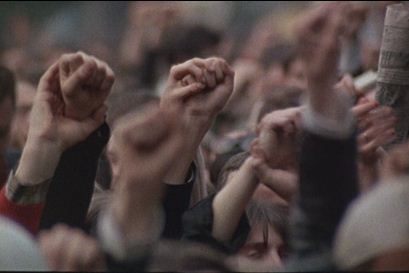 For readers who haven’t studied or given sustained consideration to the art and culture of the late 60s, it was a time of great turbulence and experimentation across all forms of media. The influence of psychedelics, the sexual revolution, the civil rights movement and political upheavals in all parts of the world engendered strong feelings of both hope for positive change and dread of what would be lost in the process. Stakes were high, tensions seemed to be continually mounting and partisans on all sides of the conflicts were readier than ever to take drastic measures and advance their cause. Mr. Freedom belongs to that brief flowering of subversive, brutal parody that produced music like The Mothers of Invention’s We’re Only In It For The Money and Absolutely Free and The Fugs’ It Crawled Into My Hand, Honest; the free-wheeling, ragged improvisation of theatrical productions like Hair and short films like the Beatles’ Magical Mystery Tour; and the “nobody can stop us” vulgarity of early underground comix by Robert Crumb, Gilbert Shelton and many others. Boundaries were pushed, taboos were challenged, blunt provocation was the order of the day. A wooly, tacky aesthetic thread runs through these works – unrefined, crude, immediate, grandiose and amateurish at times, but relentlessly exploring and flush with the the excitement of new possibilities. Though it received only a limited, belated release here in the States and was poorly received by the critical establishment at that time,  Mr. Freedom struck me as an extraordinarily entertaining send-up of the hawks who were escalating the Vietnam War, unleashing the pigs to hassle the hippies, blacks, peaceniks and radicals and who believed themselves to be the last best hope for the advancement of humanity against the evil threat from godless Communism. 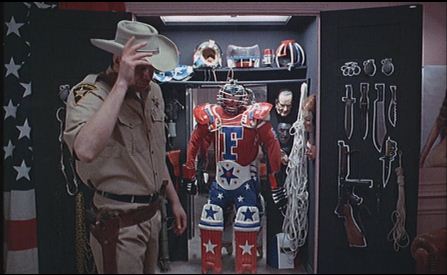 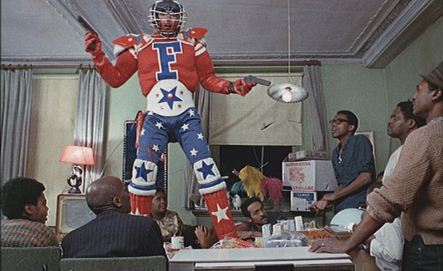 We first meet  Mr. Freedom as a sandwich munching, malt liquor chugging enforcer of the law, going about his routine duties in the USA. The film opens with documentary footage of riots in urban America, with looters raiding burned out stores grabbing TVs, appliances, whatever they can carry. Witnessing the lawlessness,  Mr. Freedom ditches his sheriff’s uniform, retreating into his flag-draped secret chamber to don the first of his many red-white-and-blue ensembles. Next thing we see, he’s barging through the window of a black family, imparting lessons on right vs. wrong and spraying a few bullets around to emphasize the points he wants to make. Then he’s abruptly called away, via his nifty two-way wrist-TV, to the skyscraper corporate headquarters of Freedom, Inc. where he’ll receive a new set of orders.

The plot, such as it is, of Mr. Freedom follows its eponymous character (who has no other name or alter-ego, though an endless variety of costumes at his disposal, never repeating his look from one scene to the next) as he carries out a mission of revenge under orders by his boss, Dr. Freedom, the white-coated mastermind of Freedom Inc. that we only ever see on glitchy TV monitors. The mission is halting the overthrow of France by Commie infiltrators aligned with the Soviet Union and the People’s Republic of China. 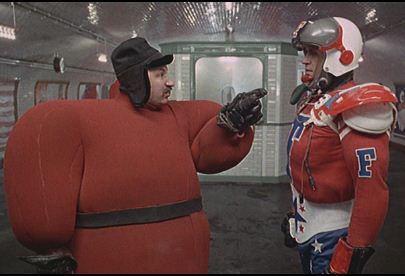 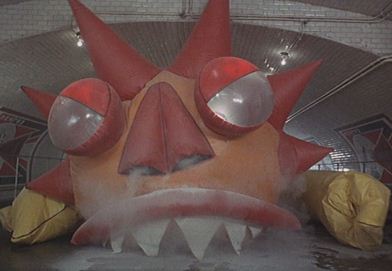 Just as Mr. Freedom serves as a proxy for the USA, the adversary nations are represented by their own costumed mascots, namely Moujik Man, a double-talking Kremlin apparatchik in an overstuffed Nerf suit, and Red Chinaman, a giant inflatable cartoon dragon. They’re suspected in the tragic death of French superhero Capitaine Formidable, who pops up in a couple of quick cameos, portrayed by none other than Yves Montand (The Wages of Fear.) Capt. Formidable was the last remnant of the whithered French resistance, and now that former ally has once again lost its collective nerve and needs the mighty Yanks to come over and bail them out just like we did in the two World Wars. 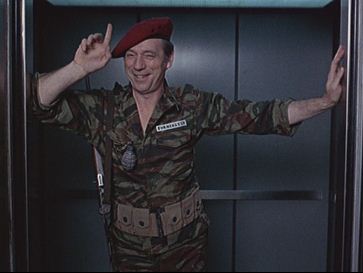 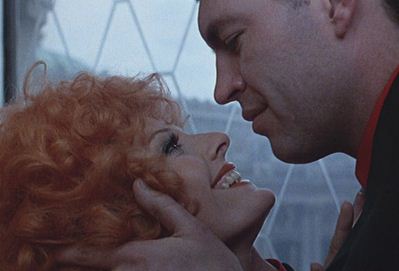 Upon landing, Mr. Freedom quickly meets up with Marie-Madeleine (Delphine Seyrig, a Criterion favorite from her appearances in Last Year at Marienbad, The Discreet Charm of the Bourgeoisie and Jeanne Dielman, 23 quai du Commerce, 1080 Bruxelles.) Here her role is much less demanding, as she basically has to flounce herself around as Mr. Freedom‘s head cheerleader in a skimpy sexy outfit. And she does that very well! But there’s more going on with her character than the appealing (if somewhat zany) surface initially reveals. She helps him set up the Freedom Rally that he hopes will capture the imagination of the French populace, and from the looks of things, he gets off to a pretty good start:

As impressive as the presentation is though, somehow the pitch fails to take hold, even after Mr. Freedom opens up a facility where recruits can practice their insurgency and counter-insurgency skills. If it weren’t for the noble cause they served, the unhinged, freaked-out mayhem that takes place there might be confused for what you’d see in a terrorist training camp! Despite his willingness to cut out the middle-man and offer bulk wholesale discounts on the handy leatherette-bound Freedom Kits (featuring Super-F defoliant and 2-ton TNT equivalent exploding ballpoint pens) Mr. Freedom still faces resistance. Is it because of the moral or intellectual weakness of his would-be proselytes? Are his enemies arguing points that resonate more strongly with the silly deluded natives? Is there a betrayer in his midst? Would a new and improved marketing campaign turn things around? 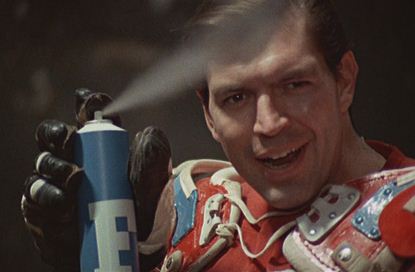 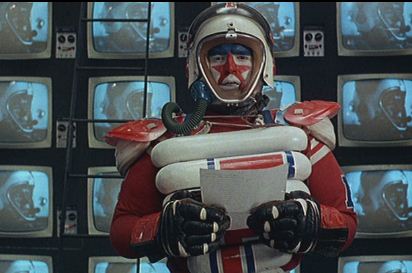 Mr. Freedom doesn’t have the time or the inclination to wonder and worry about such things! He’s a man of action, and when Plan A doesn’t go according to plan, it’s time to press harder on the gas pedal – no slowing down, no retreat, no surrender! That’s not what Mr. Freedom is all about. Having used everything else in his arsenal to win French hearts and minds, Mr. Freedom makes one last appeal, begging them to not force him to go all the way and drop THE BIG ONE!

While Mr. Freedom‘s absurd, exaggerated narrative spins wildly toward its apocalyptic, cartoonish finale, packing its own simplistic political punch, what knocks me out through the course of the film are the vivid colors and playful details of Klein’s set designs and costumes, just short of miraculous considering they had to have been produced on a shoestring budget. Among my favorites are the US Embassy, a supermarket stocked full of bland generic branded products and staffed by bouncy go-go dancers, and the ridiculous pseudo-tech Freedom bunker that serves as command central when the incorrigible French citizenry force Mr. Freedom‘s hand to escalate the conflict. 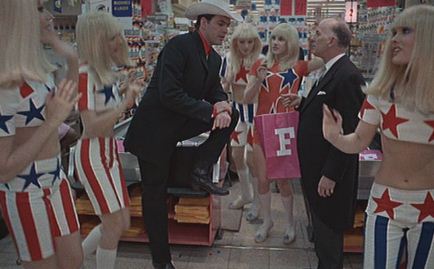 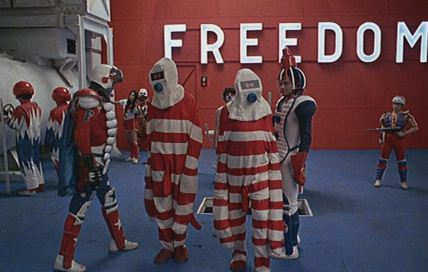 I’ve peppered this review with many screencaps that I think speak eloquently enough for themselves without requiring a lot of commentary from me. Some parts remind me of the trippy flourescent whimsy of Yellow Submarine and early Peter Max, while other segments resemble the pop-art carnage of Godard’s Pierrot le Fou. 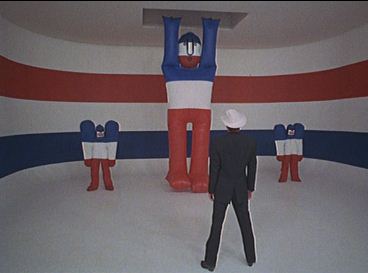 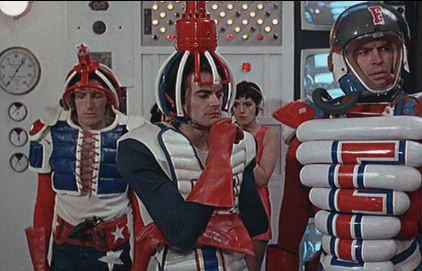 It also brought to mind more recent films like Team America: World Police (in its over-the-top political satire) and even the Matrix Trilogy (with its banks of TV monitors and subway tunnel hero vs. villain encounters.) Mr. Freedom also served as inspiration for Beck’s Sexx Laws video, and its explosively abundant visual flair makes for wonderful mash-up possibilities like this one, which adds digital enhancements you won’t see in the original:

Mostly though I just laughed out loud throughout the film, enjoying the continually audacious mockery of consumerism, action and spy movies of the period and especially the portrayal of cocksure, in-our-face, unapologetic, my way or the highway reactionary conservatism gone wild. It’s pretty much impossible for me to watch and listen to Mr. Freedom and not experience flashbacks to Reaganism and the Bush/Cheney years, especially in the aftermath of 9/11 and their War on Terror. 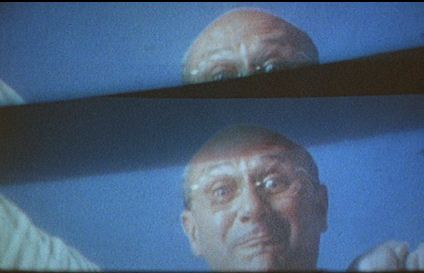 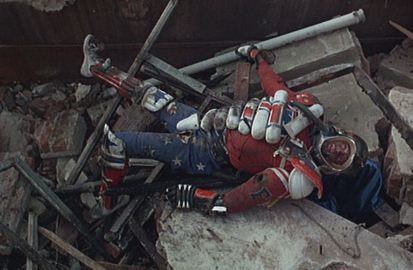 And it gets me thinking about today’s political situation here in the United States. We have a full summer and fall of electioneering to get through before we know for sure what changes will take place in our nation’s political life, but in the meantime, I’m hearing a lot of squawking from Mr. Freedom‘s ideological descendants, the “Tea Party” factions and other such paranoiacs who are looking for a real Mr. Freedom they can rally around and put out there as their public spokesman. When, not if, they find their dream candidate and put the new Mr./Ms. Freedom up before the American public to sell us their repackaged 21st century “handy leatherette Freedom kits,” I hope the voters have the good sense to pay more attention to what the next Doctor Freedom is saying behind the scenes. 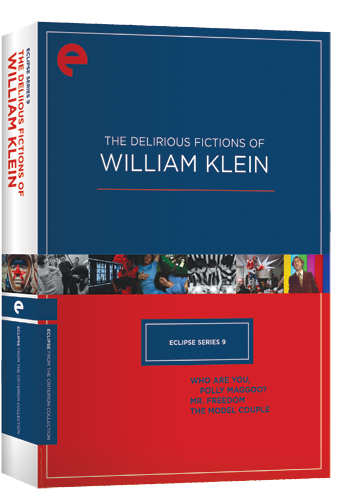 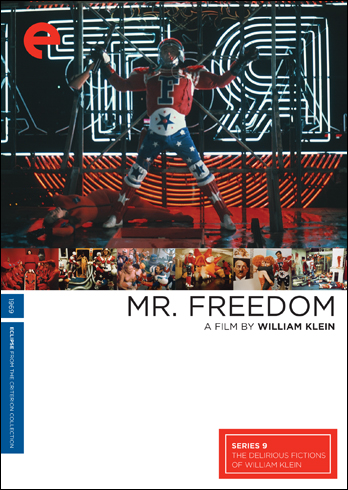