A Journey Through the Eclipse Series: Alexander Korda’s The Private Life of Don Juan

Despite a pending general release date still more than four months away, Joseph Gordon-Levitt’s directorial debut Don Jon is already generating some curiosity and even excitement in the film blogging world. Going off a very favorable buzz following its debut at this year’s Sundance Film Festival, fans of the actor, whose star seems to be rising straight into bankable A-lister territory (if not quite there already), are eager to see him take the next step in a promising career. The film’s subject matter, about a studly guy from New Jersey whose hyperactive love life is thrown off-track by an intensely compulsive addiction to omline pornography, reportedly strikes a strong note of courageously provocative boundary-pushing balanced by the mainstream accessibility of familiar faces like Scarlett Johansson, Julianne Moore, Tony Danza, JG-L himself and a generous scattering of Hollywood pals who presumably had themselves a great time dropping in for quick cameo gags in their friend’s first feature.

The film’s title is, of course, a play on the famous archetype of Don Juan, the suave and dashing ladies’ man whose amorous adventures are the stuff of legends that stretch back to the late medieval era. That character is now so firmly established in popular culture that it’s not  at all necessary to know much about the historic origins of the story in order to understand that Don Juan was the prototypical champion of Eros who all the women wanted to be with and who all the men wanted to be. Of course, that’s just on a surface level. As most of us who live in the real world understand, wanton promiscuity and grandiose expectations of non-stop sexual gratification have a way of stirring up a whole lotta conflict and turmoil in our lives, more than actual love. Taking the notion of Don Juan too literally is a surefire road to disappointment, and what’s more, the descent into parody and absurdity is all but inevitable the moment one tries to present it with a straight face. Still, there’s something compelling about the idea of being an irresistible sex magnet, with all the stimulation and conflict sure to follow in its wake, that just seems tailor-made for playful cinematic exploration. So with all that in mind, I turn to The Private Life of Don Juan, from Eclipse Series 16: Alexander Korda’s Private Lives, to scrutinize just how a film from nearly 80 years ago dealt with this particular force of nature. 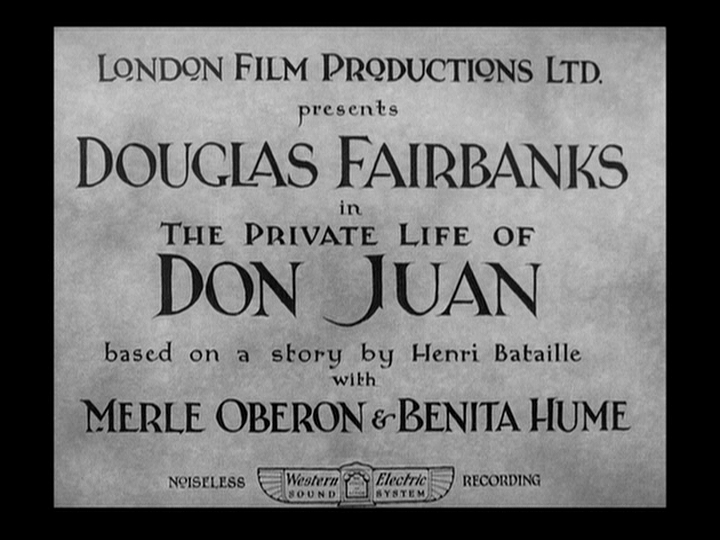 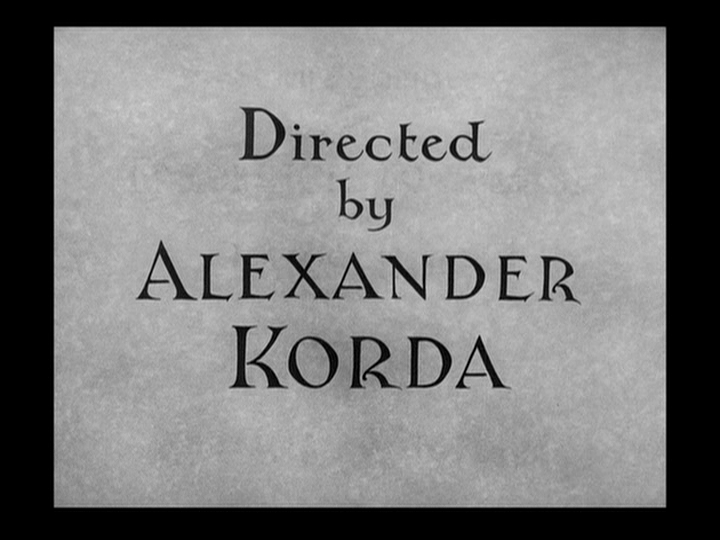 Movies featuring either Don Juan or a character specifically modeled after him are too numerous to accurately count. IMDb.com lists over 200 films just with “Don Juan” in the title, dating all the way back to very beginning of commercial motion pictures in the early 1900s. (And that’s not even counting his Italian equivalent, Don Giovanni…) But what makes this one quite distinctive among that group is that it stars none other than Douglas Fairbanks, the original blockbuster action hero – the man who as much as anyone who ever appeared on film can be given credit for creating the standard of a masked protagonist who combines raw athleticism, quick-witted intelligence and fearless bravado in standing strong against the bad guys while retaining all the charm needed to woo the lovely women whom he so frequently rescues from danger. (Speaking of which, here’s a hot tip for you: there’s a new Superman movie opening soon… you might want to check it out.) Fairbanks’ performances as Zorro, Robin Hood, the Thief of Bagdad and D’Artagnan in The Three Musketeers still stand up impressively across the decades, and his old-school insistence on doing all his own stunts crushes any notions that he was just a vain pretty-boy. Time and space limitations prevent me from adequately summing up the magnitude of his achievements in Hollywood’s Golden Age, but I think it’s sufficient compare his impact on the movies to that made by one of his contemporaries, Babe Ruth in regard to baseball. Sure, others have broken the old records and become more famous in their times, but Fairbanks set the standard for a super-duper worldwide movie star. He just had the misfortune of living in a time when the long gracious  exit and massive accrual of life-long benefits enjoyed by later celebrities had not nearly evolved to their present level of comfort and stability, if managed prudently enough. So he, like the Bambino himself, burned out way too soon, both victims of indulgent living and negligent of self-care, dying young, mere husks of the men they were at the peak of their respective games.

And as it turned out, Fairbanks wrapped up his career with this film, intentionally taking on the role of a legendary hot-blooded Latin lover, in wary, self-effacing recognition that he was already over the hill, too old, crass and craggy to convincingly pull it off if he played the role too straight. So what we have here in The Private Life of Don Juan (a title more packed with innuendo than anything we see play out on the screen) is an early and (as it turned out) financially disastrous exercise in self-mockery, the kind of flippantly ironic brush-off that certainly didn’t sit well with its original audience but might find a more appreciative response from today’s viewers who are willing to look past some of the film’s clunkier moments in order to admire its star’s willingness to lampoon his own ridiculous posturings over the preceding twenty years or so. It takes a certain blend of cocky arrogance and jaded resignation to one’s imminent collapse to create this kind of movie. And thankfully, the great impresario Alexander Korda, fresh off of his own unorthodox takes on equally infamous characters like Henry VIII and Catherine the Great (and with Rembrandt on its way a couple years later) was in just the perfect position to help usher Fairbanks off stage so fittingly. 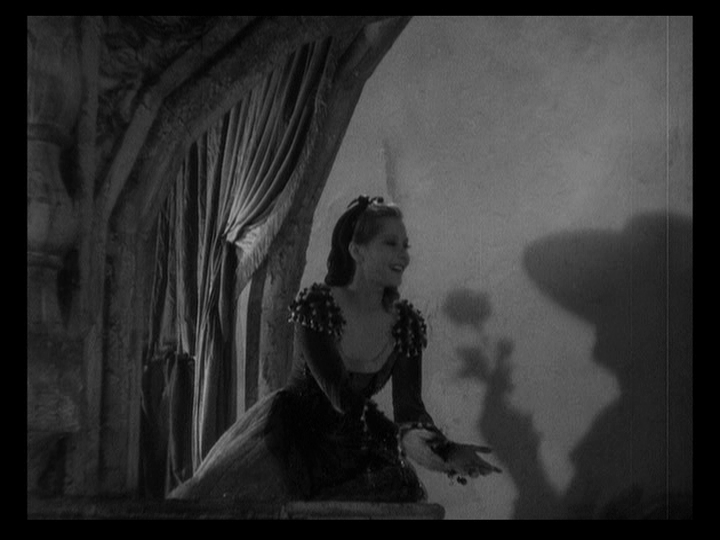 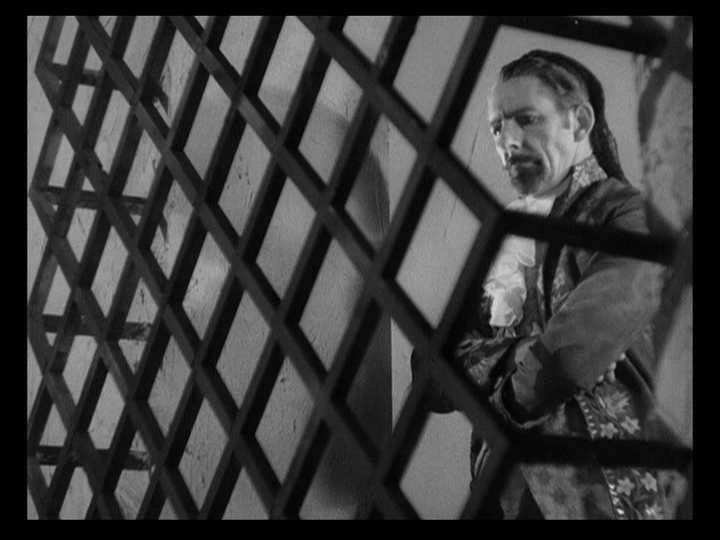 The story begins routinely enough, with a quick recap of the legend sung by a local minstrel as backdrop to scenes of pretty actresses adorned in Spanish garb catching roses on their balconies tossed their way by a mysterious seducer in the shadows, followed by comical shots of jealous husbands just now picking up on the intrusion of a rival who’s setting their wives hearts’ a-flutter. 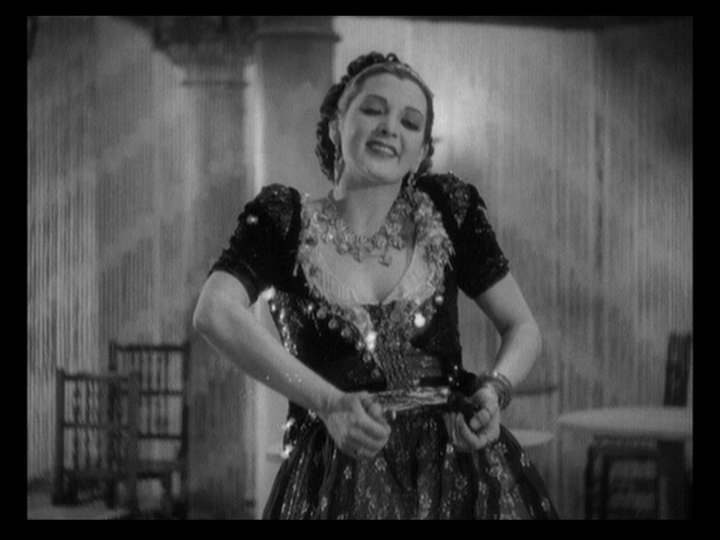 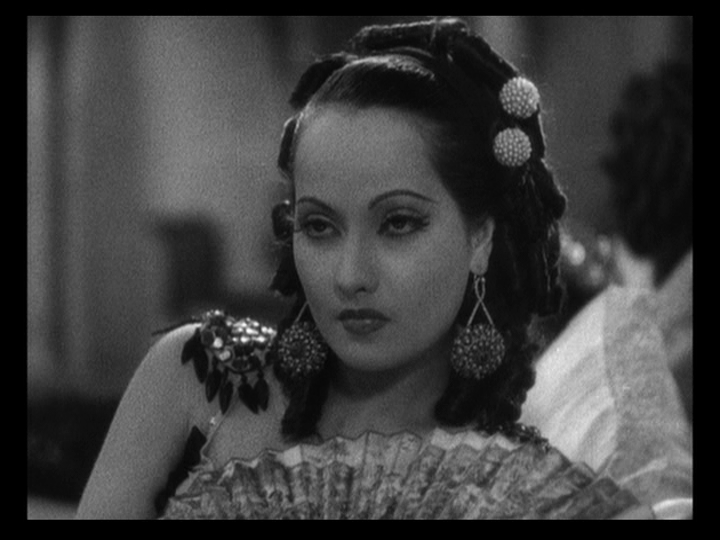 That sets the stage of a few scenes of suggestive sauciness as a few of the women deliver their bosom-heaving reports of late-night illicit encounters. But a competitive fire ignites when word of Don Juan’s unmatched prowess in the art of love reaches the ears of the haughty dancer Antonita (one of Merle Oberon’s last roles before she made the jump from Britain to Hollywood.) 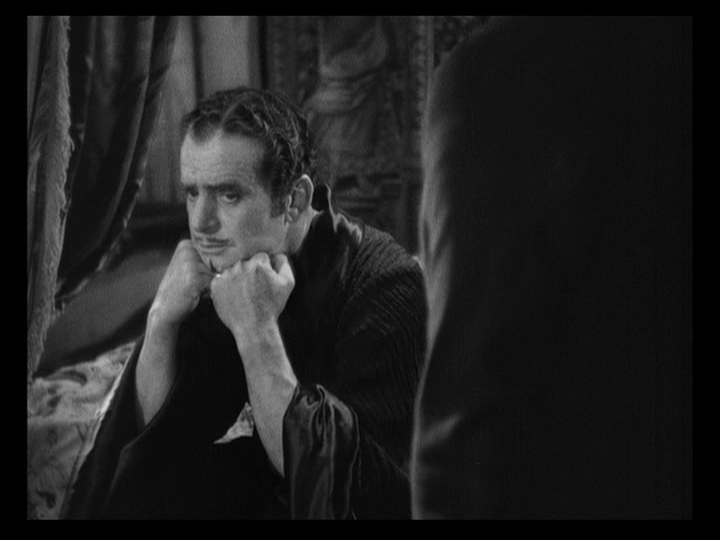 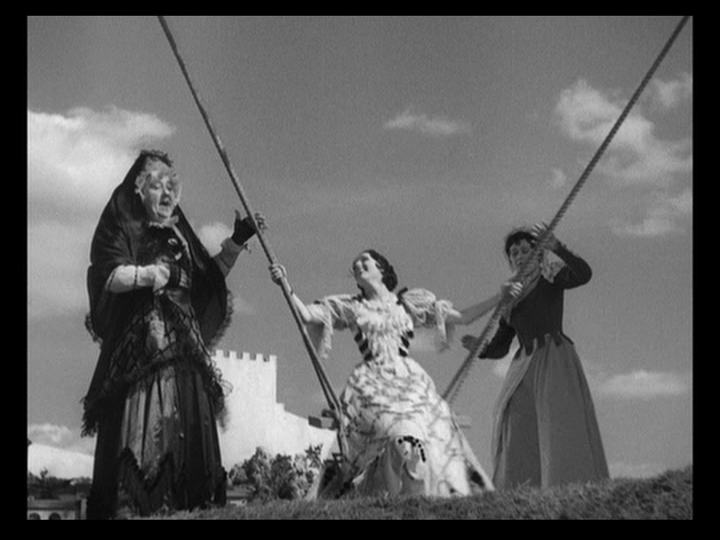 Just as the hype surrounding this prince of passion reaches its boiling point, Fairbanks makes his deliberately deflating star entrance, as a cranky and gloomy old man getting his reflexes checked by an old quack of a doctor. There’s no tangible effort made to cover up the wrinkles on Fairbanks’ face or the hunch in his posture. Like the actor himself, this Don Juan’s best days are well behind him, and he knows he’s caught up in a reckoning process that he’ll probably never escape until death brings his saga to an end. And the scales of cosmic justice for Don Juan are held in the dainty hand of Dona Dolores, a beautiful “Lady of Mystery” (as she’s described in the whimsical opening credits) who seems to have some peculiar leverage over the Don that allows her to elude his otherwise irresistible temptations. 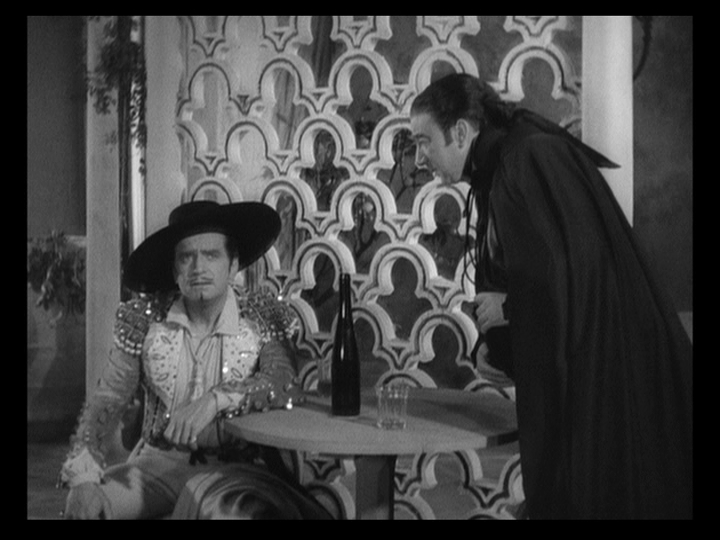 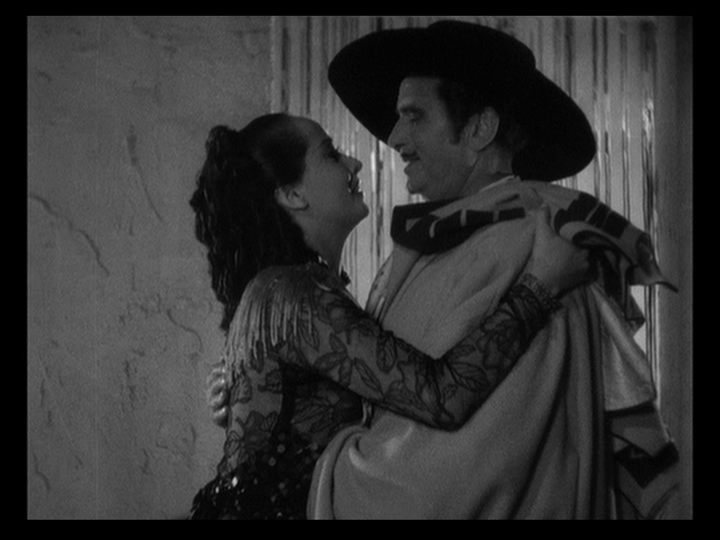 Much of the humor that runs through The Private Life of Don Juan comes through this juxtaposition of Fairbanks’ reputation as the brash icon of Hollywood royalty  and the all-too-obvious decline that’s already set in and is picking up steam. In that general sense, he gives us guys a wry meditation on the aging process and the necessity of marshaling our energies a bit more strategically than we had to worry about in days gone by, so that we have a little something left in the tank when the right opportunities arise. 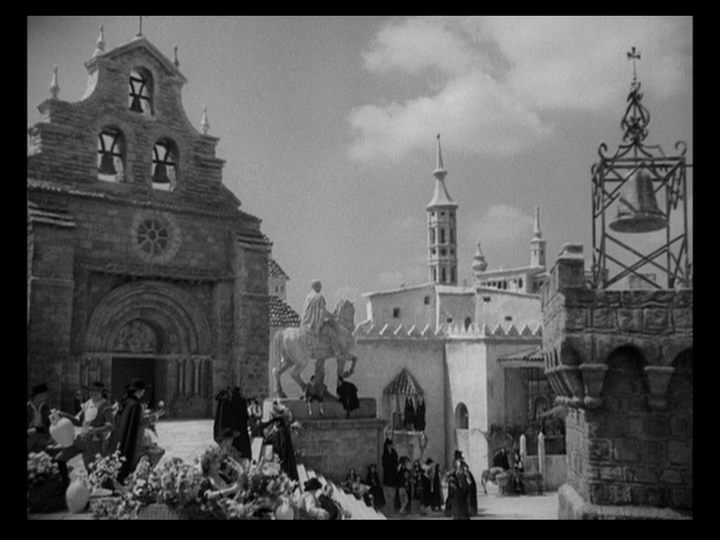 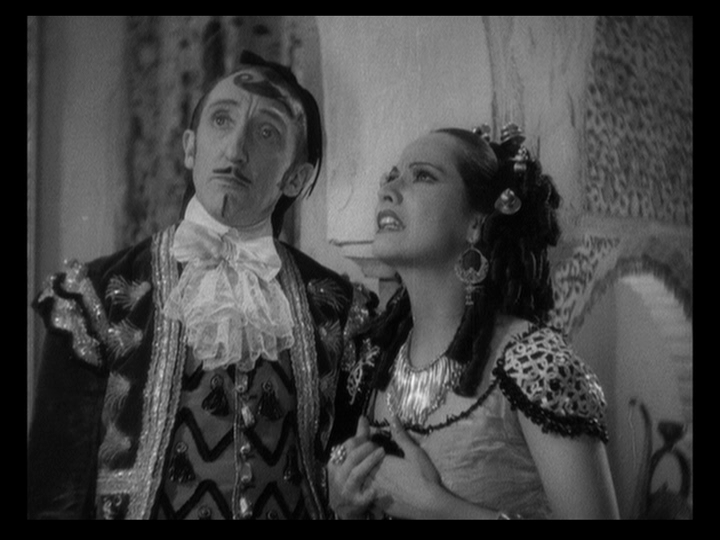 Adding to the fun, assuming one enjoys this sort of thing, are fine examples of playfully monumental 1930s backlot sets and routinely proficient character acting flourishes of that era. Claud Allister, pictured above, has one of those memorable faces that one doesn’t have to see a lot of to still remember – he played the daffy Prince Otto in Ernst Lubitsch’s Monte Carlo, reviewed in this column three years ago. 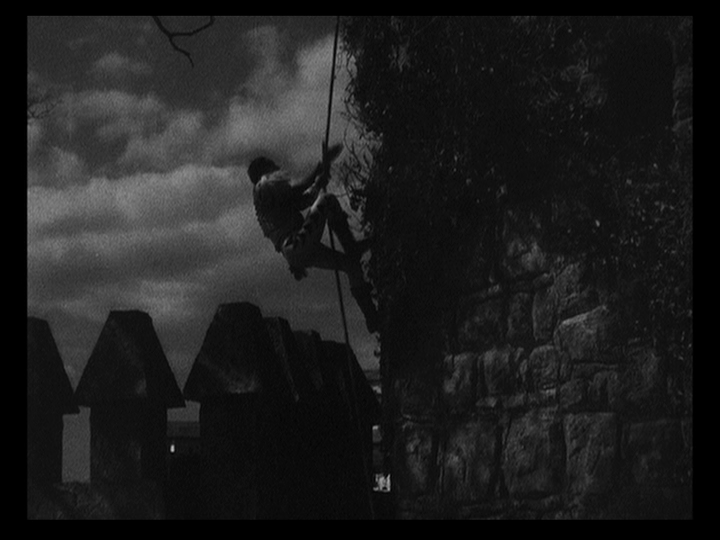 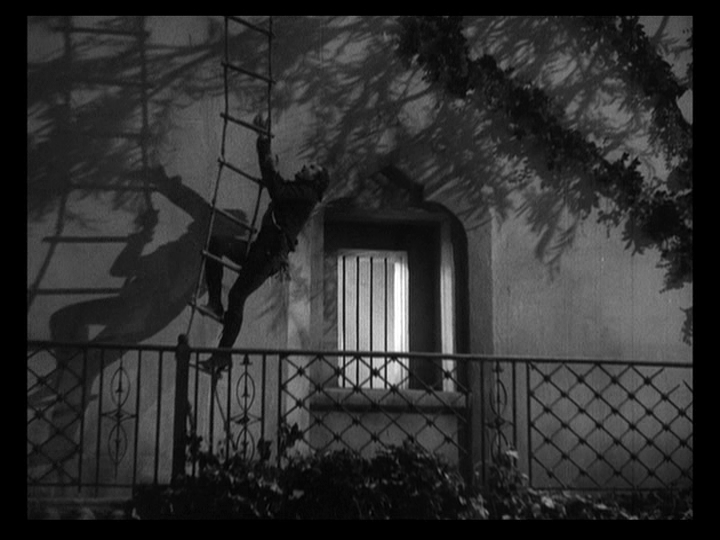 And while there’s nothing that compares with the magnificent action sequences that established longstanding benchmarks for swashbuckling excitement in his earlier films, Fairbanks climbs a few ropes and ladders in ascending the walls of a proverbial “castle in Spain” with admirable agility for a chain-smoker who would be dead from a heart attack just five years after this film was released.

For fans of classic cinema though, probably the biggest attraction to be found in The Private Life of Don Juan is in the interaction between Fairbanks and the gorgeous Merle Oberon. She stands out among a well-chosen cast of beauties, and the above clip captures her very best moments from the film. 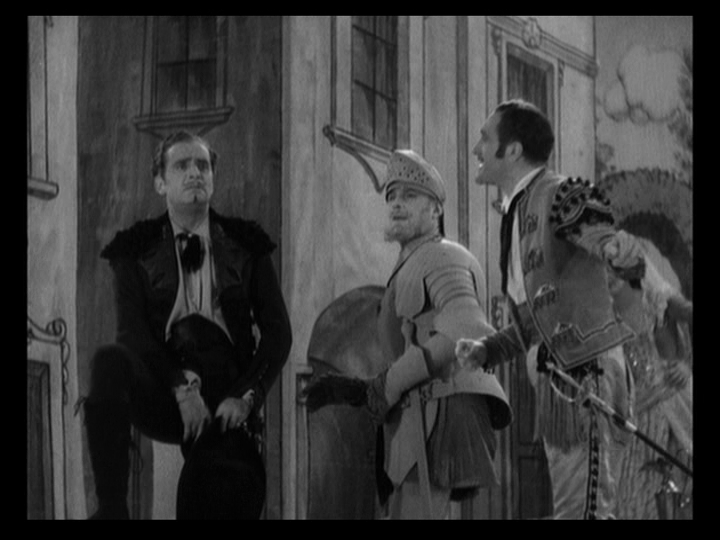 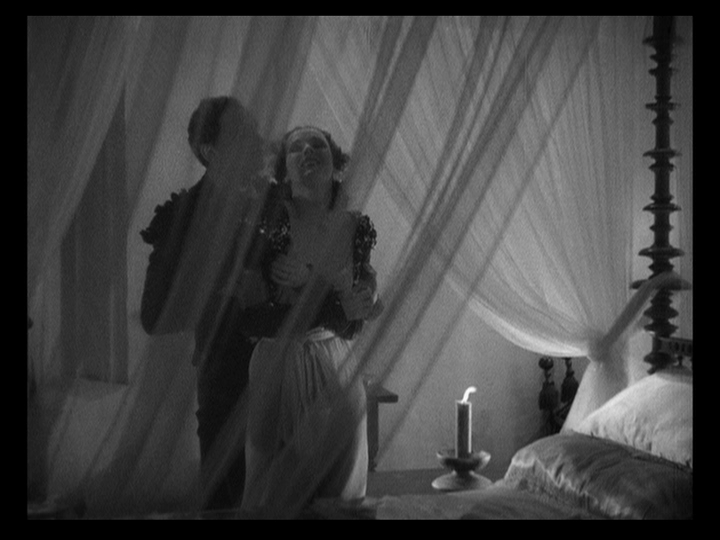 Though Alexander Korda’s lasting fame is surely based more on his accomplishments as a producer more than as a director, he demonstrates a solid-enough command behind the camera to keep the story briskly moving over the course of its 89 minutes. Perhaps as a final nod to the epoch-defining acting career that was now coming to an end, he gives Fairbanks a memorable send-off by allowing him to stride gallantly into a play-within-a-play set-up as “the real Don Juan” rudely interrupts a farcical, sappy stage production bearing the same title as the very film we are watching. It all erupts so quickly and naturally that we might have to take a few moments to fully appreciate the overtly meta self-referentialism that’s going on here – it’s not really the kind of thing we’re used to seeing in 1930s films, and yet it makes perfect sense as Fairbanks lets his audience in on the fact that he’s aware of just how silly his antics have been, when it gets right down to it, regardless of how much they’ve entertained them or how rich he’s become in the process. His strenuous appeals to be taken seriously, and the audience’s mocking contemptuous laughter in response to his plea, provides a rather cynical twist of commentary from one of cinema’s all-time greats in the twilight of his career.

But after Don Juan is arrested and carted off stage as a sad, deluded imposter, his story goes through a few more twists and turns, winding up right where he (and we) knew he’d end up all along… at the edge of a bed, in the arms of a woman he grudgingly had to admit held custody of his heart and soul, no matter how hard he tried to bury that truth under a litany of one night stands. When all is said and done, it’s Dona Delores who gets the last word, explaining that what every woman wants is more than just a mere husband… it’s to have Don Juan, just all to herself. 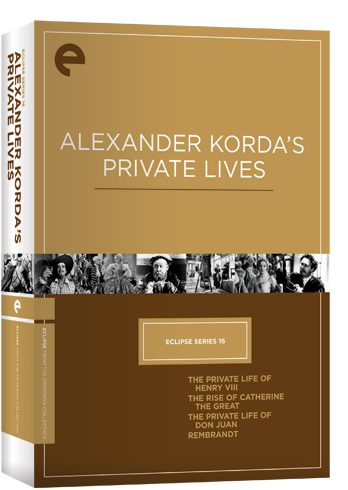 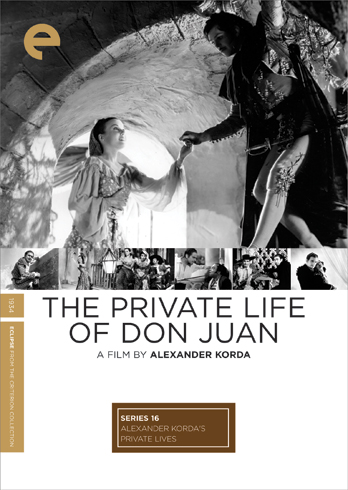