A Journey Through the Eclipse Series: Akira Kurosawa’s The Men Who Tread on the Tiger’s Tail

Earlier this week, I wrote a brief essay on Hideo Gosha’s Three Outlaw Samurai for my Criterion Reflections blog. The gist of my review was in regard to how that film marked a significant development in the samurai genre as the tone and attitude of these pictures veered over the course of time ever more toward a darker, more cynical perspective, in keeping with Japanese cinema culture’s general drift in that direction in the early 1960s. In that article, I referenced a number of samurai film classics, but not this one. No surprise there – The Men Who Tread on the Tiger’s Tail is so easy to overlook, for reasons I’ll spell out below, that it wasn’t even included in Criterion’s Samurai Cinema “Themes” page on their website. 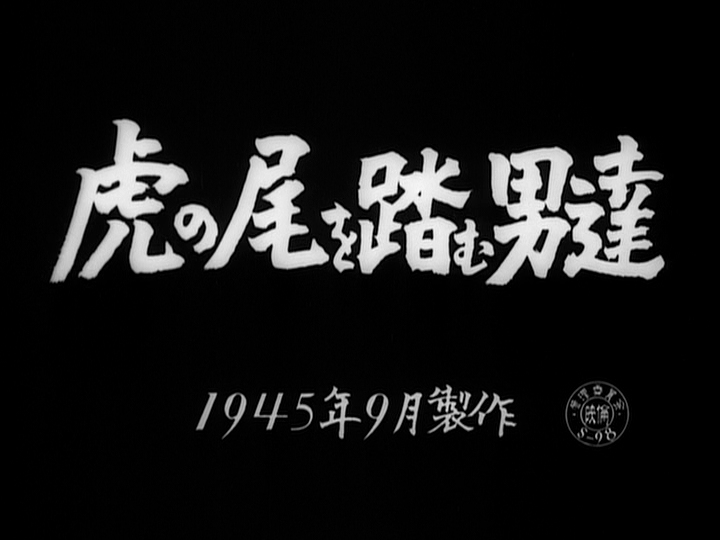 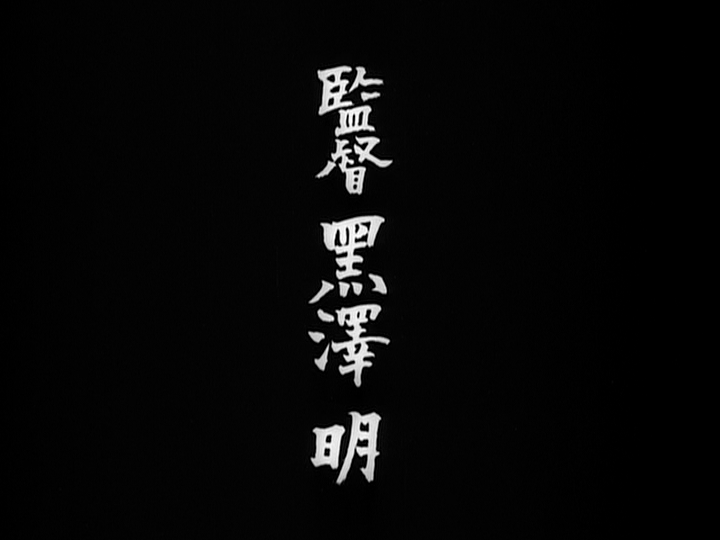 The Men Who Tread on the Tiger’s Tail is part of Eclipse Series 23: The First Films of Akira Kurosawa. With a running time just under one hour and with most of the action taking place on one set (featuring different backdrops that give the illusion of proceeding on a journey), it’s easily the most constricted, small-scale production of any film associated with a director best known for filling his cinematic canvas with broad and majestic tableaux. The lack of fighting action is also quite unusual for this genre – mostly confined to a scene or two of men waving swords and poles at each other, a threat that never comes to fruition in serious life-or-death combat as we might expect. Indeed, the film has more the feel of a period costume sketch, a comedy or folk tale perhaps. And yet, it does present an early Kurosawan take on some of the profound issues that he would return to over the next several decades as he applied the lessons of samurai history to life in the modern world. 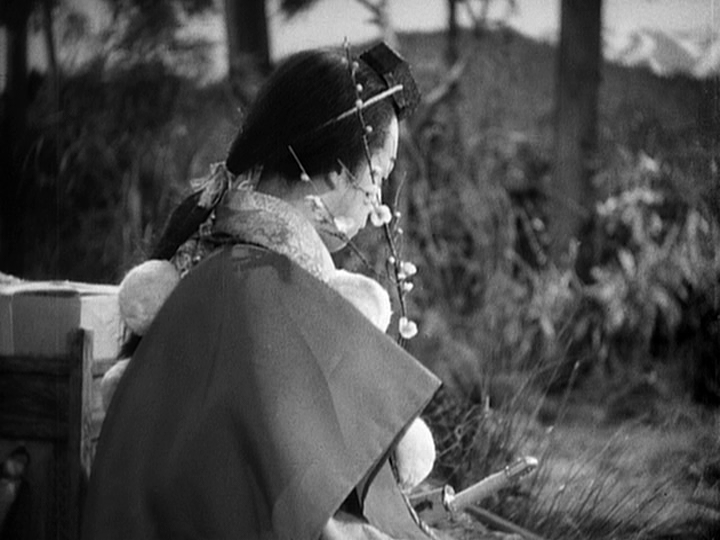 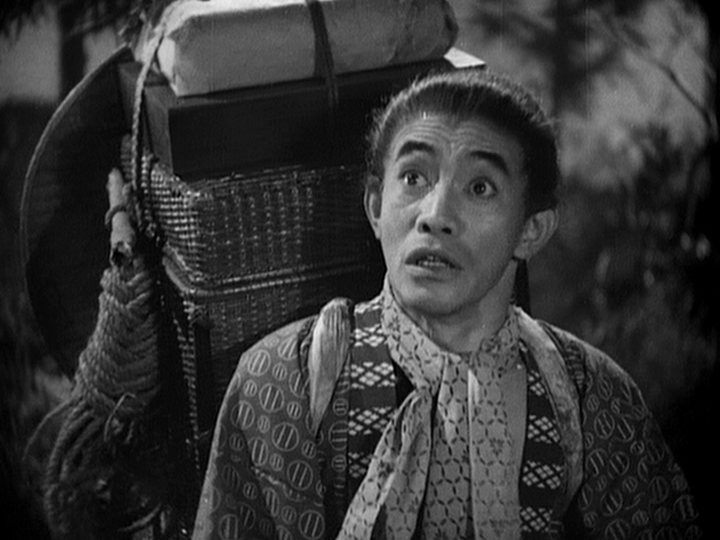 The ancient legend that provides the film’s story involves a feud between two brothers who happen to be princes, sometime around the late 12th century. The younger brother, Yoshitsune, finds himself in danger from his elder sibling, who has the upper hand in terms of military control. His only alternative to captivity and probable execution is to embark upon a dangerous trek to freedom, where he can take refuge in the domain of a sympathetic ruler who will offer his protection to Yoshitsune and his  six samurai bodyguards, provided they can get past barriers stationed throughout the forest wilderness in order to catch the refugees before they escape.

This plot, well-established within the Noh and kabuki theater traditions, hallowed by time and tradition, received a unique jolt of humor and energy when Kurosawa made the inspired decision to toss an impish buffoon into the mix. Kenichi Enomoto was a popular funny man in Japanese films throughout the 1930s and 40s, and his expressively goggle-eyed performance as a nameless tag-along porter who inadvertently assists the prince and his retinue in their escape definitely livens up what would otherwise be an overly solemn affair. (To be fair though, some samurai genre purists might find him irritating as hell though, especially since he does tend to intrude and take over, mugging shamelessly whenever he’s on camera.) However, that same note of levity also introduced complications that prevented the films release a full seven years after its completion, due to the offense taken by Japanese censors as World War II was winding down. They didn’t approve the slightly mocking tone of it all, so it was never properly licensed, and that led the American censors who took charge of film distribution in the Japanese occupation regime to shelve The Men Who Tread on the Tiger’s Tail as unsuitably feudal and potentially disruptive, even though they probably had little understanding of what the film was actually about. 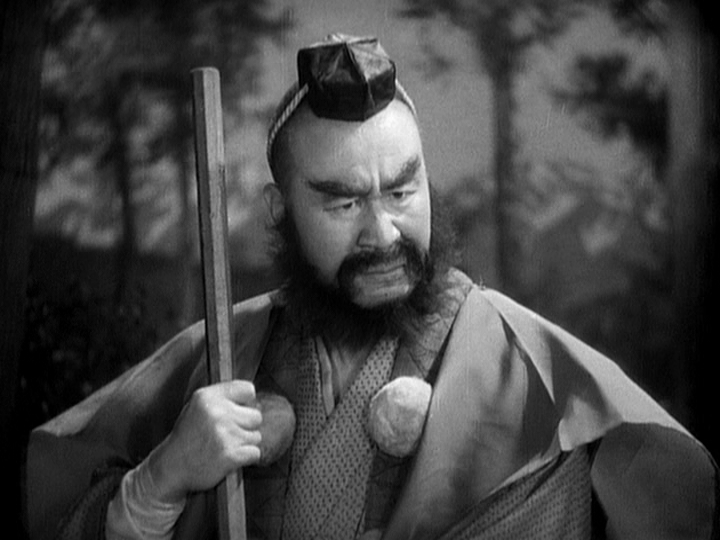 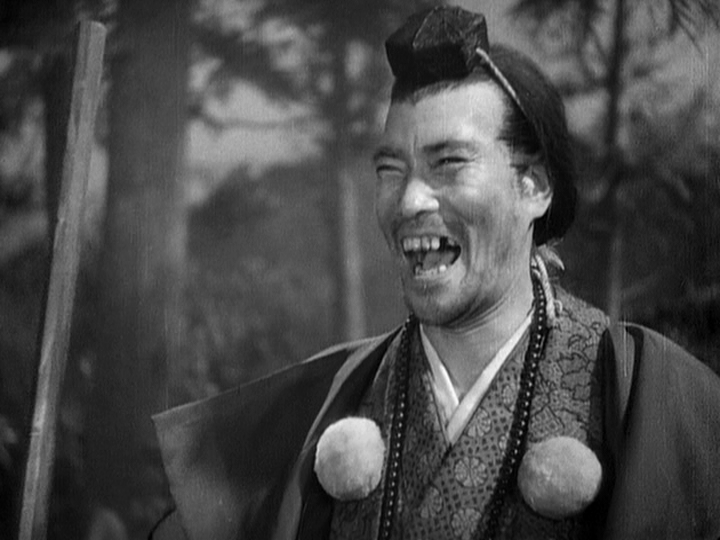 If those American censors had taken the time to give Kurosawa’s comedic/contemplative ensemble piece a fair and unbiased look, I suspect they would have found little in the way of insurgent provocation. A straightforward interpretation of the basic story critiques the hard-hearted despotism that puts brothers in dreadful opposition and innocent men in fear for their lives. The addition of the clown-like porter works to deflate the grave dignity and martial seriousness that probably led the Japanese wartime government to approve the project at a time of limited resources in the first place. In any case, we can be thankful that the movie was kept safely in the can until it made its theatrical debut in 1952, rather than be lost due to neglect or indifference. Though not without a few blemishes here and there, this is the best looking transfer of any of the four films in this Eclipse set.

Aside from the satisfaction of curiosity and simple diversion that comes with discovering an obscure minor work by one of the greatest directors ever, avid Kurosawa fans can enjoy the opportunity to identify numerous characteristic moments and details that would eventually come to full fruition in his later, more famous productions: the trademark swipes (horizontal and vertical), long processions through the sun-dappled woods, cameras pointed up into the treetops, the absence of female characters and a sustained focus on the conflicts and grudging relationships between men. The most obvious example of this is the parallel between these six samurai and the crew that Kurosawa put together a few years later when he found room to squeeze a seventh sword-wielder into his cast. In this crew we have Hitachibo, the burly ox-like brute (with a ridiculous fake beard slapped onto his cheeks) and Suruga, a gap-toothed ruffian… 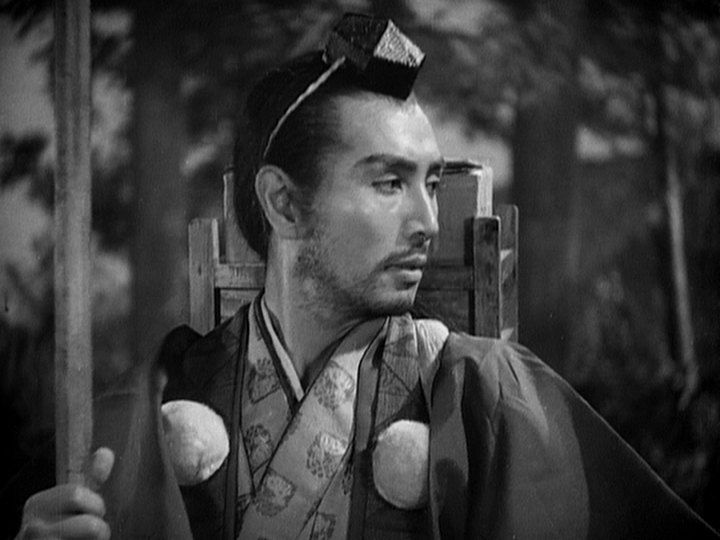 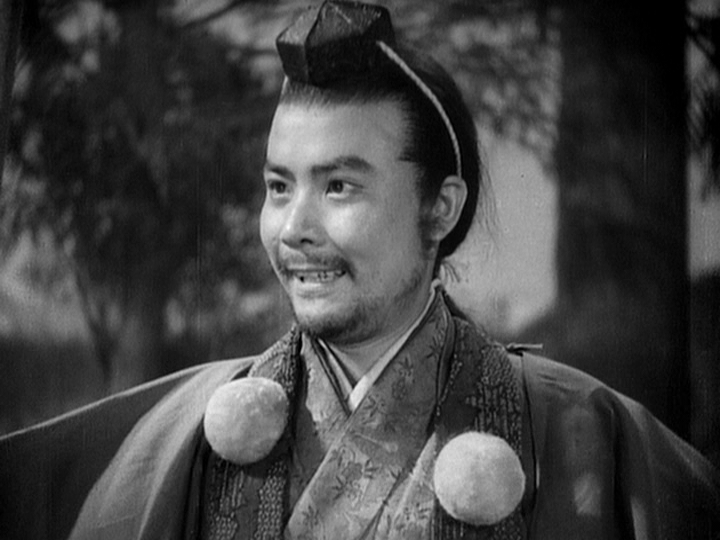 The handsome Kamei (Masayuki Mori) may be a more familiar face to Japanese film aficionados, due to his roles in Rashomon, Ugetsu, The Bad Sleep Well and When a Woman Ascends the Stairs, among others, and the appearance of Ise (Akitake Kono) may also kindle recollections of his future appearance as Taro, the son of Sansho the Bailiff. 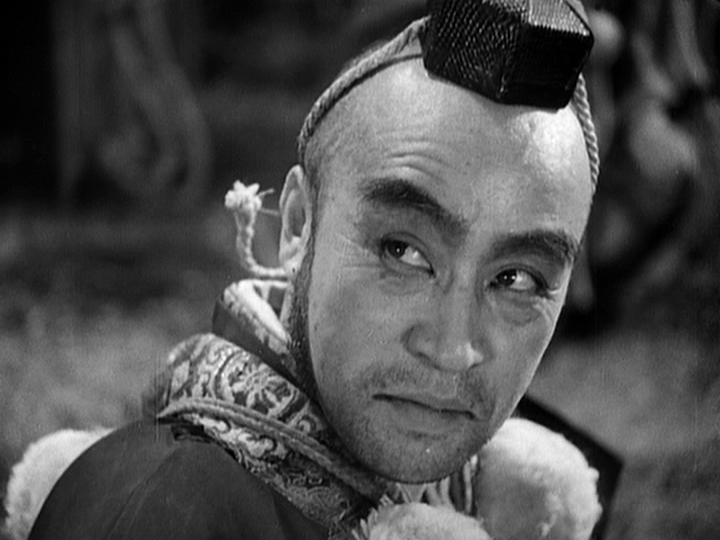 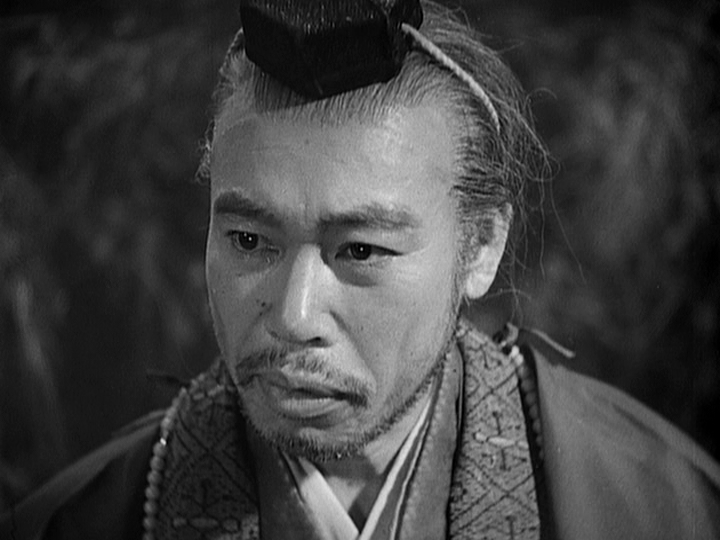 Benkei is the leader among these six samurai, carrying the critical responsibility of bluffing his way past the well-guarded checkpoint, and then there’s Kataoka, easily the most readily recognizable face of them all, played by Takashi Shimura, who apparently aced his lessons as Benkei’s “future leader in training” for his immortal turn as Kambei in Seven Samurai. With a very limited running time, there’s little opportunity for the characters or backstories of this cohort to be developed or differentiated all that much, but Kurosawa already begins to show an interest in the choreography of large groups of stern men, and he  has a little fun with rapid-fire editing on a few reaction shots for both humorous and suspenseful effects. 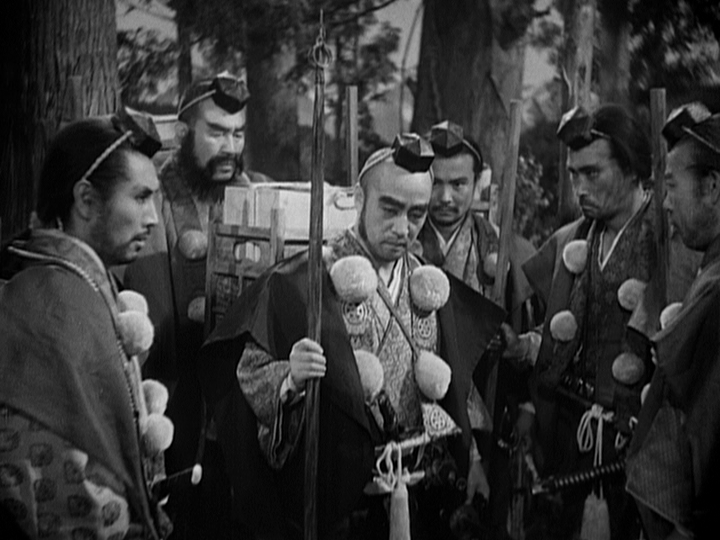 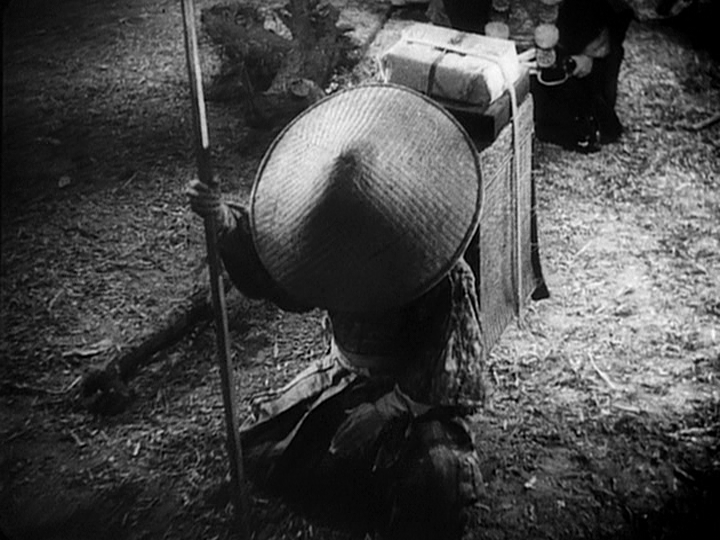 Kurosawa also dances nimbly around the taboos surrounding the bushido code of honor, balancing the samurai’s self-denying subservience to his master – “The important  thing is  what happens to our  lord. Bravery comes after that.” – with subtle jabs at how preposterous such blind allegiance to authority can be when it creates menacing danger for those who’ve done nothing to deserve it. Likewise, Kurosawa (and the viewers) get to have it both ways when Prince Yoshitsune endures the humiliation of disguising himself as a lowly foot-servant in order to make his disguise more convincing – officially, the film marks this as a sad dishonor that the poor potentate has to suffer, but at the same time, there’s a sense of karmic justice being served as this pampered aristocrat gets a taste of what he’s forced so many minions to put up with. 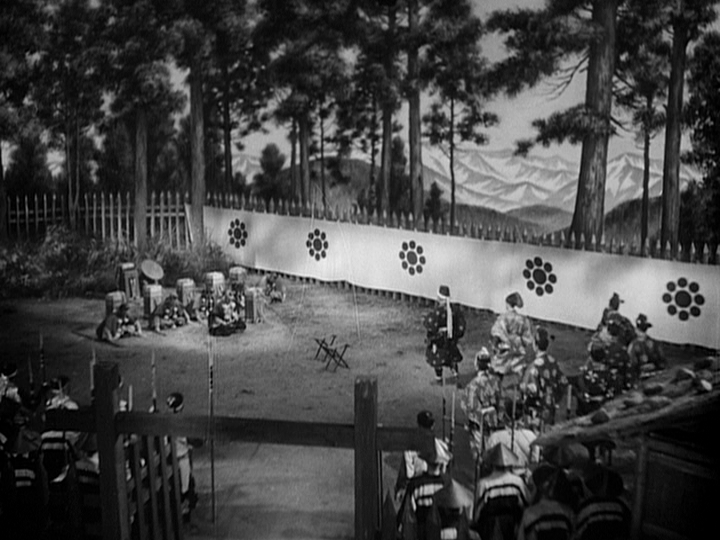 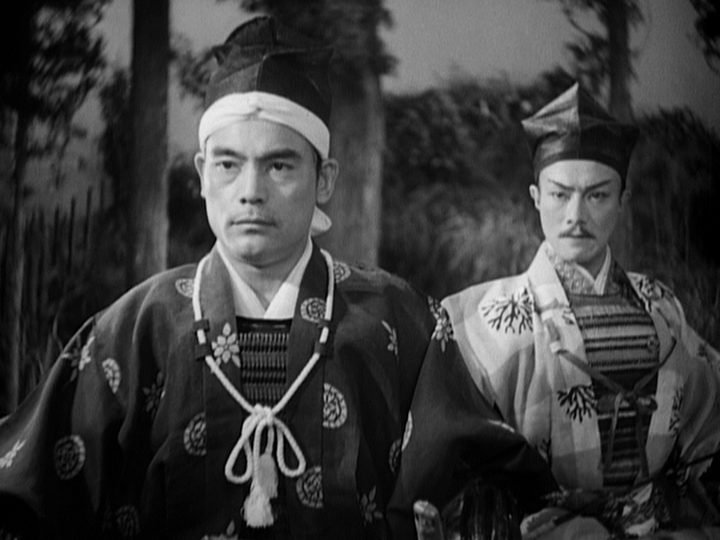 The plot thickens when the time comes for Benkei and his men to play their gambit at the highly defended barrier. Will they be able to convince the guards to let them pass, or will their ruse fall apart under scrutiny? Given the rumors that Yoshitsune and his men have disguised themselves as itinerant priests, and that this group closely matches the description of the outlaw samurai the soldiers have been ordered to apprehend, it’s going to take some quick thinking and smooth talking for Benkei to earn the trust of Togashi, commander of the checkpoint. Togashi is played by none other than Susumu Fujita, Kurosowa’s first leading man in the Sanshiro Sugata movies – but it’s really that nameless beady-eyed henchman staring over his shoulder who presents the biggest danger to our would-be escapees. 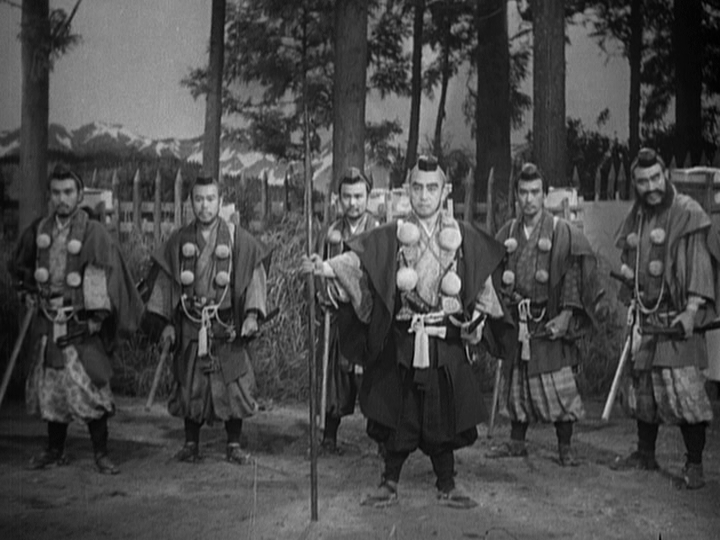 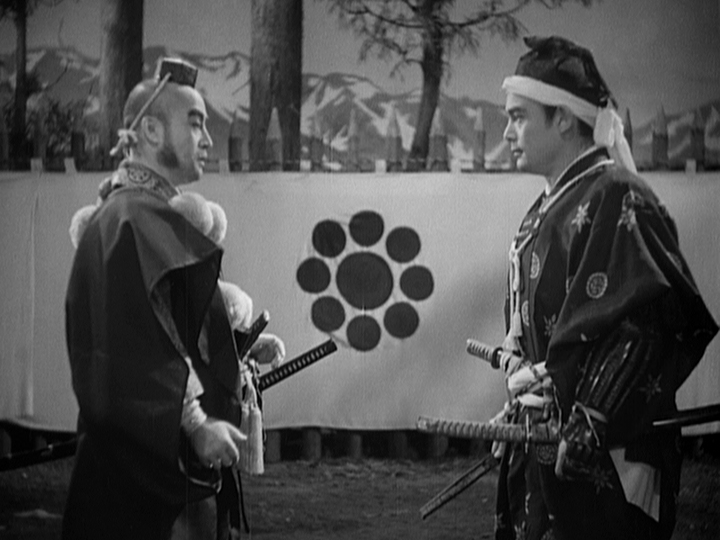 Without spoiling too much, I’ll just say that the verbal sleight-of-hand and mental trickery employed by Benkei to weave his way through the trap is impressively executed and cleverly constructed, even though their perilous circumstance compels him to inflict further indignities upon his lord – another bit of aristocratic humiliation played for both pathos and delicious retribution that subverted genre conventions and kept The Men Who Tread on the Tiger’s Tail on the shelf until Kurosawa’s growing box office clout demanded its eventual release. 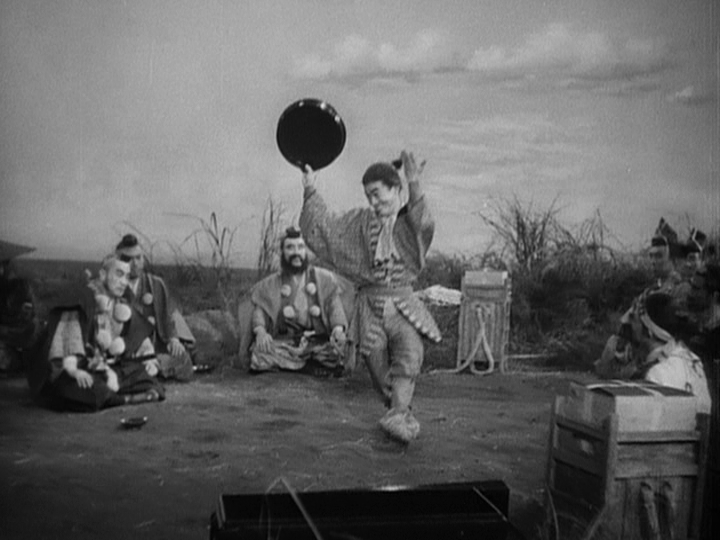 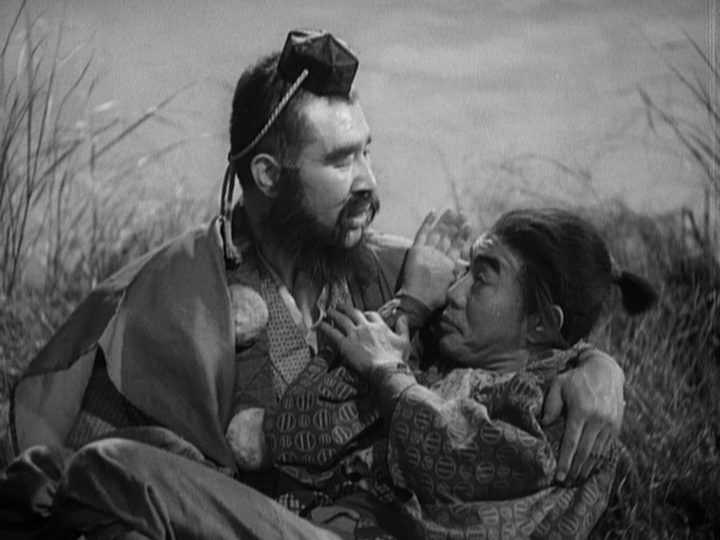 After successfully threading the needle and preserving their lives (at least until they reach the next barrier), what’s left to do besides have a picnic in the grass, get drunk and unwind a little? Well, that’s what happens at the end of this film, anyway. It’s an odd scene, the necessity of which isn’t exactly made clear, but in any case, a contingent of Togashi’s men catch up with the “priests” bearing copious casks of sake as a way of apologizing for ever doubting their story in the first place. After gulping down several bowls of the good stuff, it’s time to dance and cut loose, with the porter madly stealing the spotlight… 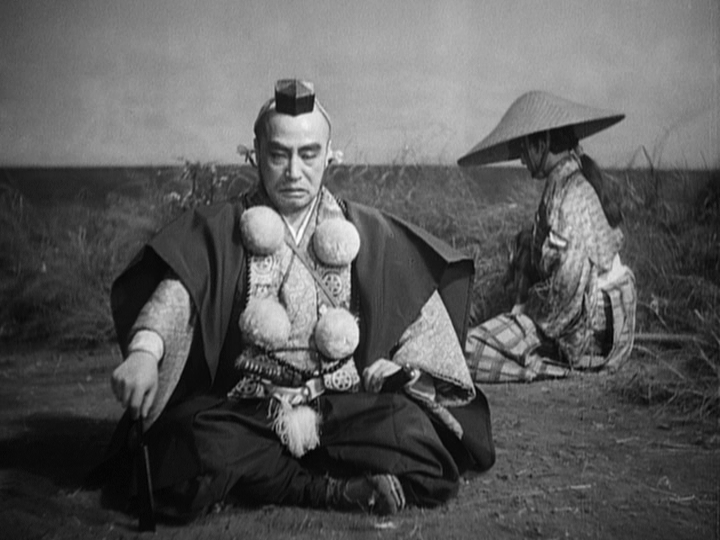 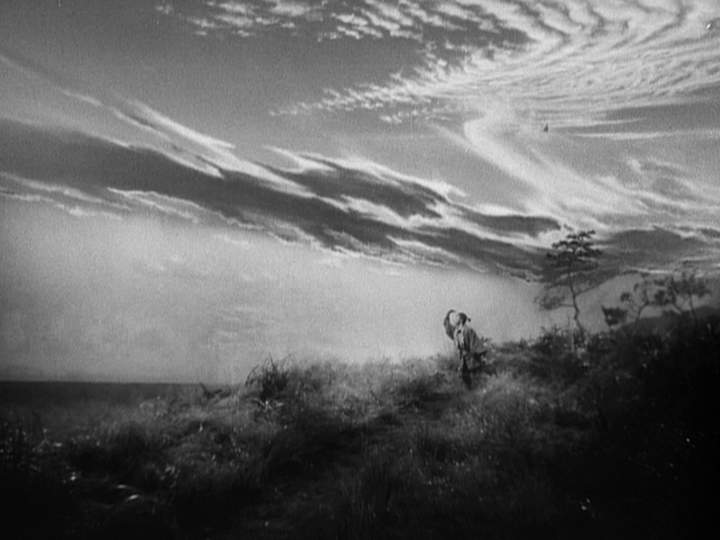 … before Benkei conducts his more dignified parting ritual, a brief Zen meditation on the ceaselessness of their wanderings and the passive indifference of the elements to their plight. The porter sleeps off his stupor and wakes up alone under the vast expanse of a blazing sunset sky, lending a fairy tale “was it all a dream?” twist at the end. Though any comparisons between this film and its successors in both the samurai genre and its director’s career aren’t likely to be all that favorable, The Men Who Tread on the Tiger’s Tail is an hour well-spent in exploring a fertile seed-bed of the glories yet to come from Akira Kurosawa’s boundless imagination. 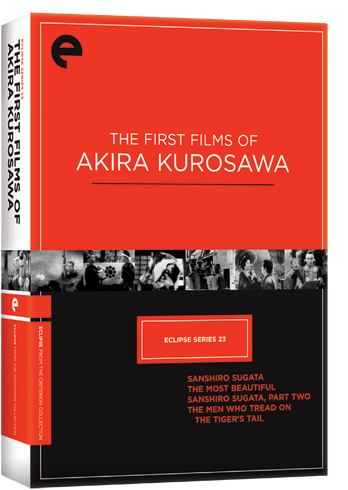 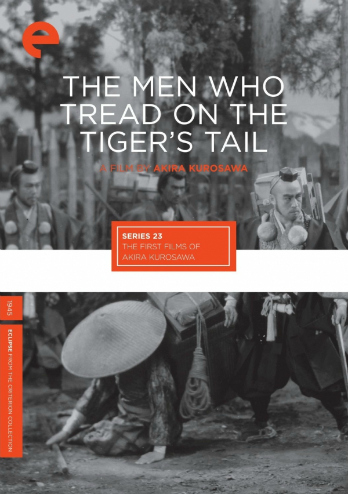