A Journey Through the Eclipse Series: Kazui Nihonmatsu’s The X From Outer Space

This next leg of my Journey Through the Eclipse Series constitutes a brief one-week diversion from the reviews I’m writing on the most recent Eclipse set, Early Fassbinder. (I’ve already covered The American Soldier and Katzelmacher, and I’ll return to that collection in my next installment of this column.) I’ve been in a spacy mood lately, so I’m taking a break Fassbinder’s grimy German milieu and casting my gaze up to the stars. Fresh from spending a few days watching and corresponding about Robinson Crusoe On Mars over on my Criterion Reflections blog, I now turn my attention to another ill-fated cinematic mission to the Red Planet. 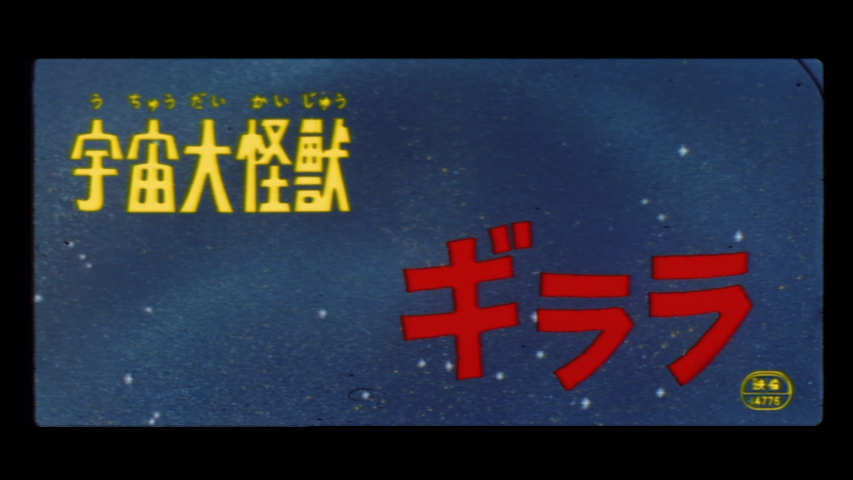 This one was undertaken just a few years after RCOM by our friends in Japan, who at the time had yet to develop anything remotely resembling a space program of their own, but hey – it’s the movies, where anything can happen, given the right budget and creativity, and perhaps most importantly, directives by the studio bosses to just make something that will strike while the box office iron is hot. Such appears to have been the case back in 1967. The four films collected in Eclipse Series 37: When Horror Came to Shochiku, document a peculiar phase in the history of that illustrious dream factory, when one of Japan’s most highly esteemed and venerable studios lowered its standards of decorum and scrambled into catch-up mode to try its hand at cranking out potentially lucrative genre titles. The first product of this short-lived experiment was a goofy mash-up of bonkers science, cardboard characters (and props) and, of course, some dude romping around in a big rubber suit that’s come to be known in English as The X From Outer Space. 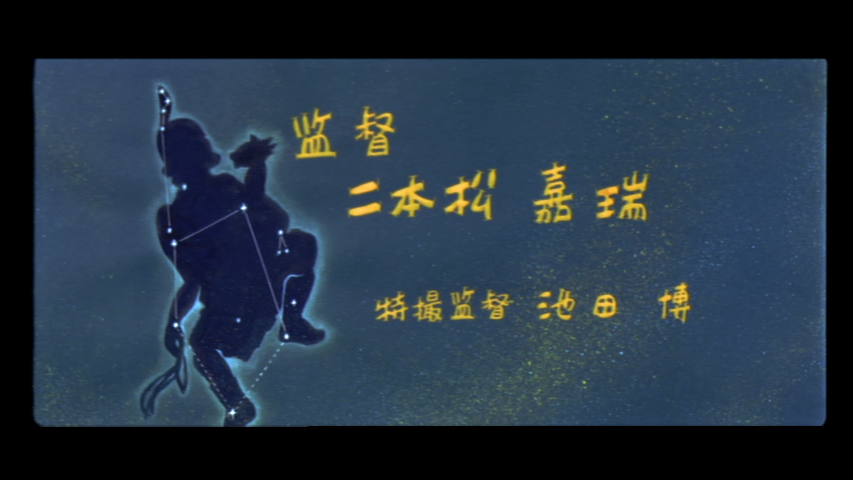 The original Japanese title translates as something like “Giant Space Monster Guilala,” which would qualify it for a high truth-in-advertising rating, but apparently that either gave away too much or was just too confusing, so the American distribution company amped up the element of mystery by labeling the creature an “X”. As was the case with Robinson Crusoe on Mars, it’s not too difficult to come up with a better name for the film than the one we’re stuck with, but in this instance, the title works simply to alert viewers that they’re in for something remarkably absurd and cartoonish.

And as far as the director is concerned, it doesn’t get any more obscure than the guy behind the camera on this one. Kazui Nihonmatsu only has two films on his IMDb page attributed to him in that capacity – this one, and another from this box titled Genocide. Not a bad resume at all to have two eventual Criterion releases to his credit, despite the limited helming opportunities and the undeniable schlockiness of The X From Outer Space. After a career spent working mainly in assistant roles under luminaries like Akira Kurosawa (The Idiot) and Masaki Kobayashi (The Inheritance), I have to admit that it’s difficult to see any traces of their influence in Nihonmatsu’s work here. 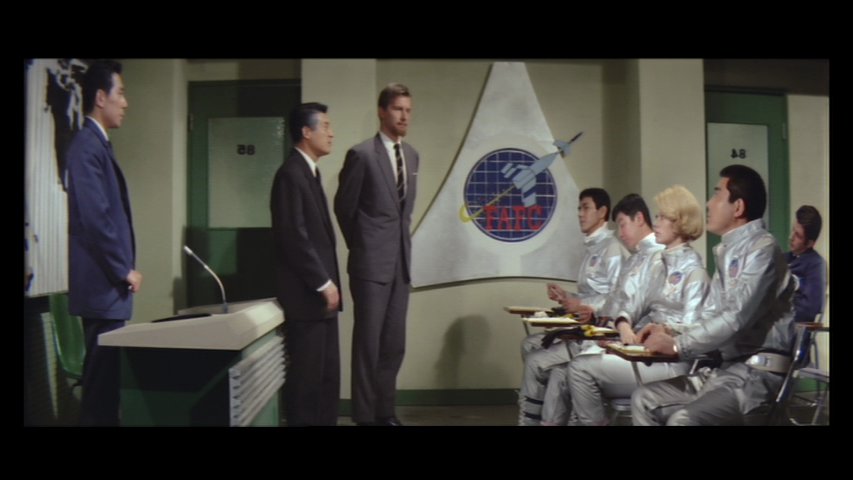 As anyone who has seen Robinson Crusoe on Mars would know, the creators of that film took a fair amount of pride in their adherence to the most current scientific knowledge about space travel and extraterrestrial conditions available to them at that time. Though some of their predictions obviously turned out to be laughably wrong, today’s viewers can still give them credit for trying. No such benefit of the doubt need be extended to the talents who gave us The X From Outer Space. Released a full three years after RCOM, scientific knowledge appears to have regressed considerably during that span. In this futuristic scenario, an international team of explorers from the Fuji Astro-Flight Center (FAFC) are commissioned to complete a long-delayed journey to Mars. Several previous excursions ended in disaster due to interference from a mysterious UFO patrolling the space between the Moon and Mars, their crews lost forever in the void. This crew, led by the brave Captain Sano, also includes a frail and queasy physician, Dr. Shioda, the radio operator Miyamoto (mainly to provide comic relief) and the distractingly sexy allure of the space biologist Lisa, an American blonde commissioned to collect any “unknown substances,” but only under Capt. Sano’s orders. The whole expedition is directed by Dr. Kato, played by actor Eiji Okada, whose career took a serious downturn after his appearance in Hiroshima Mon Amour back in 1959. 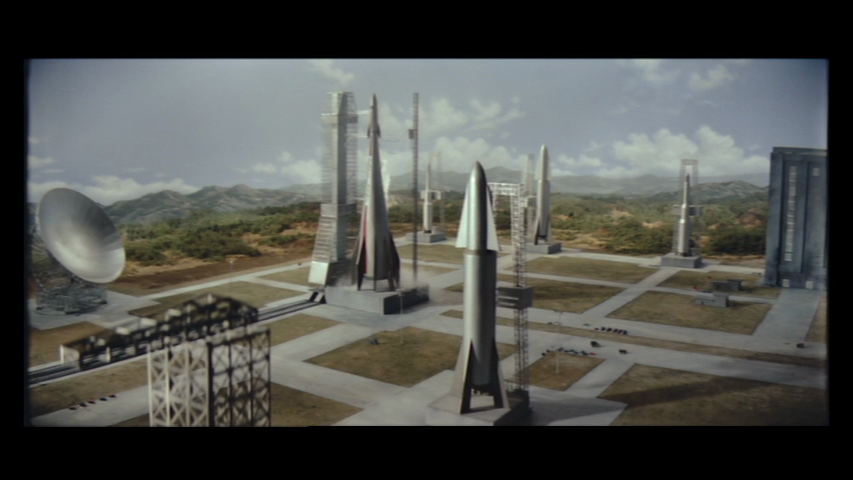 If there’s one aspect of The X From Outer Space that I can recommend wholeheartedly, it’s the miniature work by art director Shigemori Shigeta and special effects designer Hiroshi Ikeda. Not that the various spaceships, launching pads and cityscapes are especially convincing – we always know that we’re looking at tiny models – but they just have a fun futuristic look about them that’s pretty cool. 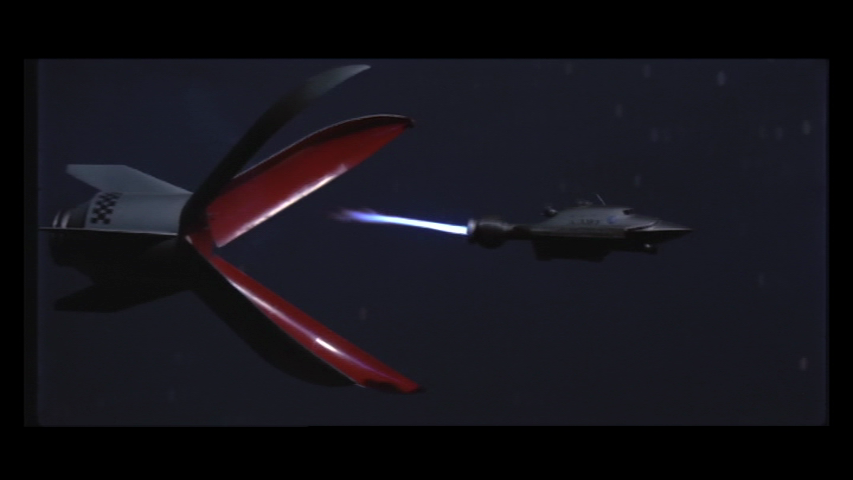 Of course, once we get onboard the AAB-Gamma Astro Boat, it’s quite apparent that little effort has been made to recreate the claustrophobic close proximity of real space flight, nor is any respect paid to fundamental laws of physics as we see the ship executing neat hairpin turns, powered by jet engines spouting blue flames. Twirling dish antennas atop the ship’s hull and assorted nonsensical gadgets clustered together in a makeshift control panel supply the finishing touches to the film’s shoestring budget attempts at futuristic verisimilitude. 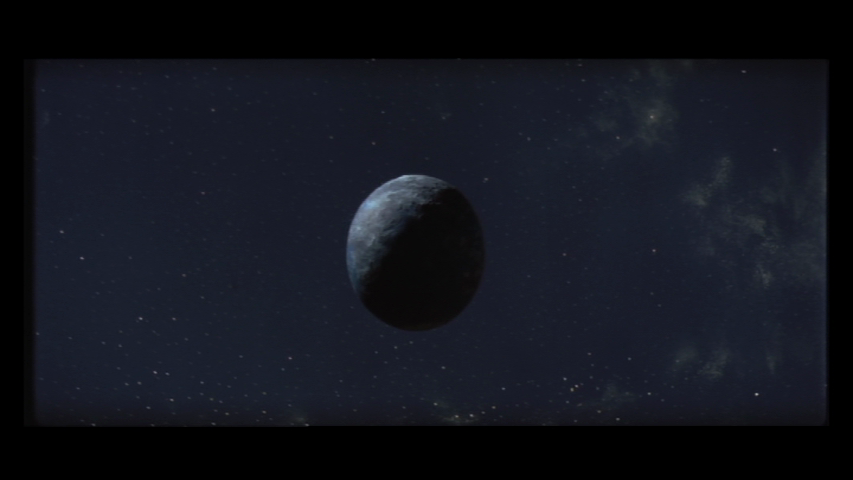 If you haven’t already noticed from the screencaps supplied here, the image transfer on this DVD is pretty soft, probably because The X From Outer Space is well down toward the bottom of the list of future film restoration projects. Of slightly greater concern is the fact that Criterion didn’t do much to correct the slightly compressed aspect ratio of the source material. The 2.24:1 dimensions are somewhat unusual, so maybe it’s a little more difficult to get it just right in the mastering process, but the distortion is most apparent when round objects like the earth’s sphere take on an egg-shaped form. 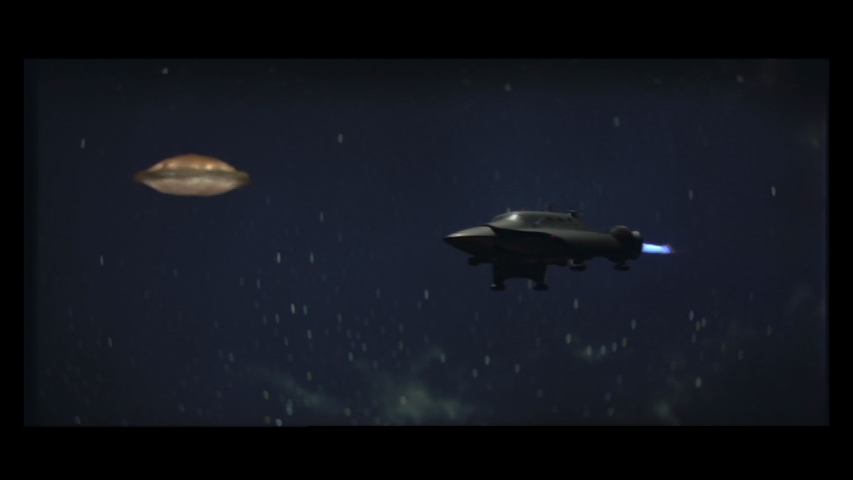 When the dreaded killer UFO appears (guided by aliens that we never see or learn anything about at all), whatever dread we might have felt regarding  its menacing power is swiftly deflated by its ridiculous appearance. Radioman Miyamoto compares to a “half-cooked omelette.” I liken it more to a chicken pot pie zipping around through the aether, but I guess that’s cultural relativism for ya. 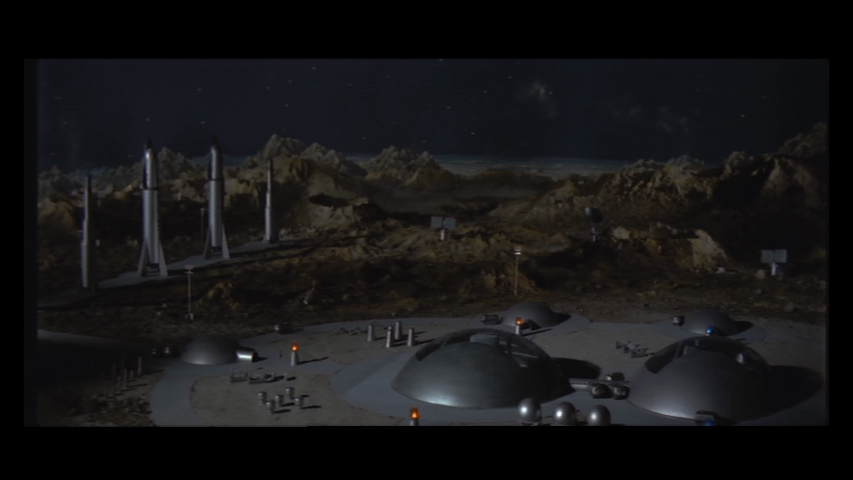 Thwarted from reaching Mars, AAB-Gamma has to beat a hasty retreat to the moon, where they can refresh their supplies, get medical help for their sick doctor and strategize about how to get around  that damnably persistent UFO. It also provides an excuse to show off a sleek lunar base set that’s a bit less than awe-inspiring. 2001: A Space Odyssey this ain’t, but that film came out a year after this one, so I guess we can forgive Nihonmatsu and his crew as they were still operating under an earlier sci-fi paradigm. 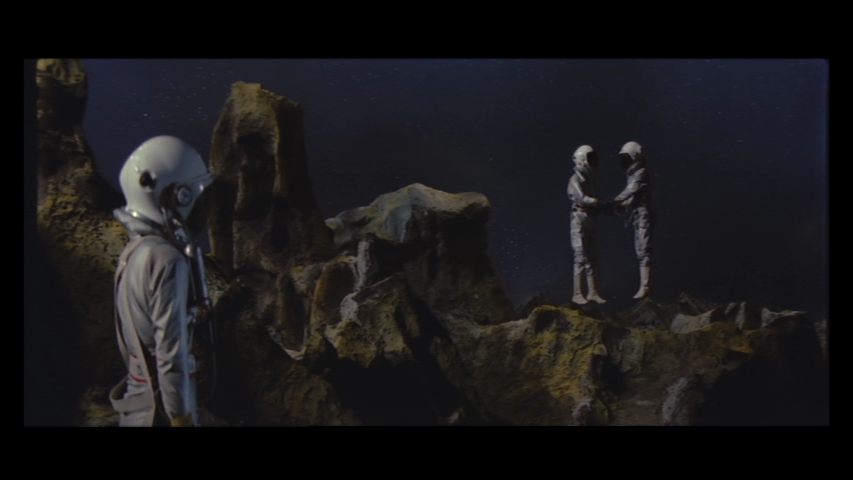 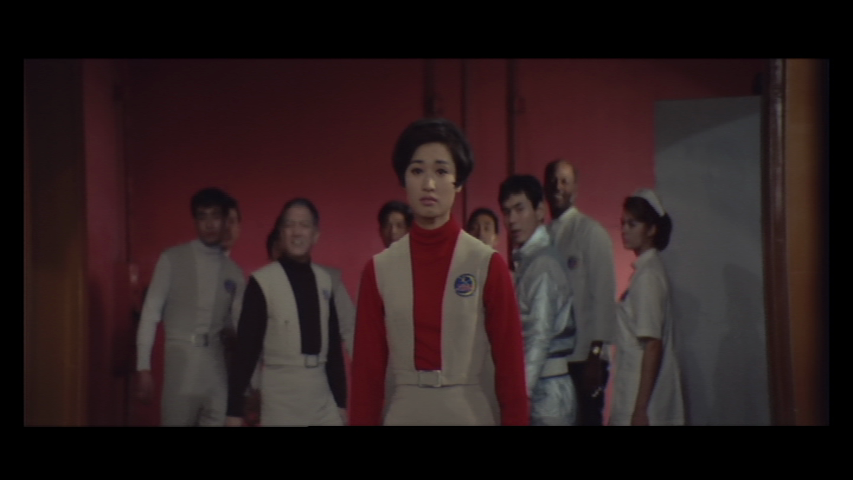 … or extend some measure of credence to the blatantly contrived and pointless love triangle that plays out between Capt. Sano, Lisa and Michiko, the communications specialist on the moonbase who harbors an unrequited crush on our putative leading man? I leave it to the discretion of the viewer to decide if all this preliminary silliness is worth sitting through, or if it’s just better to skip straight to Chapter 5, roughly halfway into the movie, when we get straight to the good stuff: 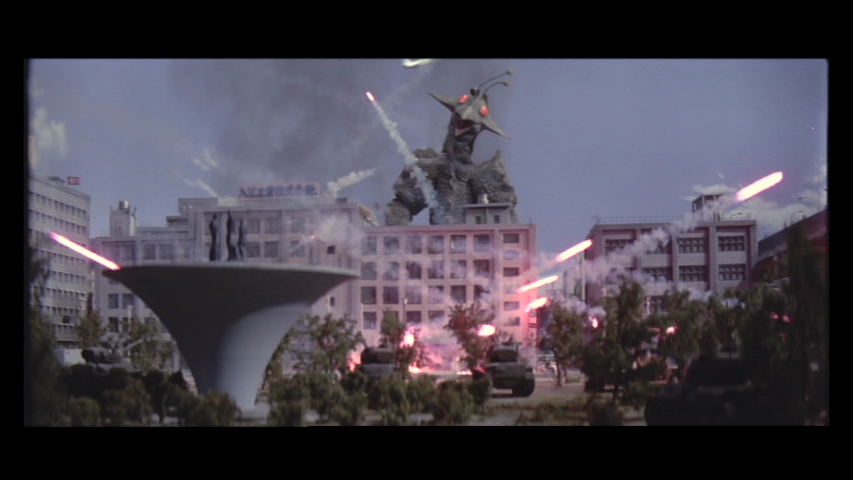 KAIJU ATTACK!!! Now I won’t bother trying to provide details on how a strange translucent marshmallow scraped off the Astro-Boat’s engine in outer space transforms into the giant monster Guilala once it reaches Earth, mainly because none are given to us in the film. It just happens! And before you know it, without any rhyme or reason, Guilala is on the rampage, melting mountains, kicking his way through downtown Tokyo and swatting jet fighters out of the sky. He’s doing it because he wants energy, or something…

Honestly, it’s all so ridiculous. The filmmakers operate under the assumption that the viewers already know the rules, that when a giant monster appears on the scene, the sole purpose of its existence is to bellow, smash and destroy. Although who knows, there may be some deeper meanings tucked into some of those scenes. For example, this moment captured above, as Guilala picks up a massive oil tanker and hurls it into the power plant… does the violence inflicted on those mighty yet serene smokestacks, once portrayed with such contemplative poise by Yasujiro Ozu in his late color films, represent a definitive rupture with Shochiku’s dignified past as they embark upon a new, bold and adventurous course? One can almost hear Guilala taunting us: “An Autumn Afternoon, my ass.” 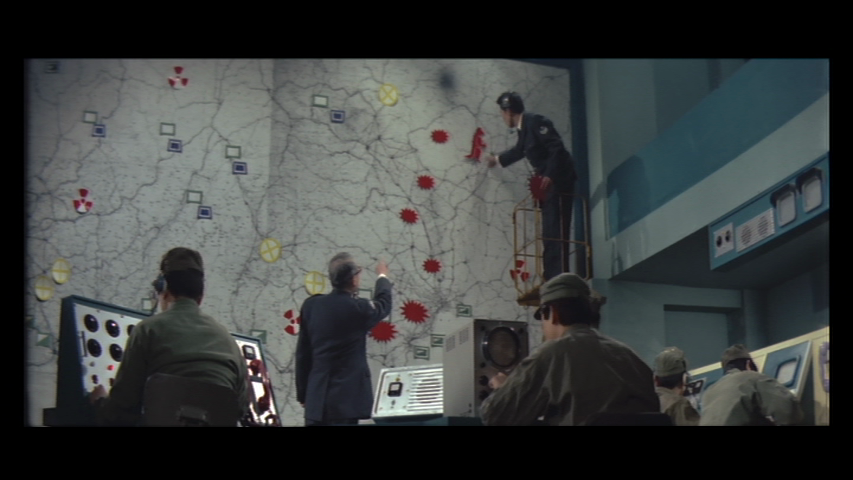 Methods employed to track the wreckage inflicted by Guilala’s tirade provoke further hilarity, as a flunkie in a cherry-picker slides a magnetized cut-out of the space monster across a map of Metro Tokyo, each of the hotspots it’s destroyed trailing behind like so many dino-droppings… 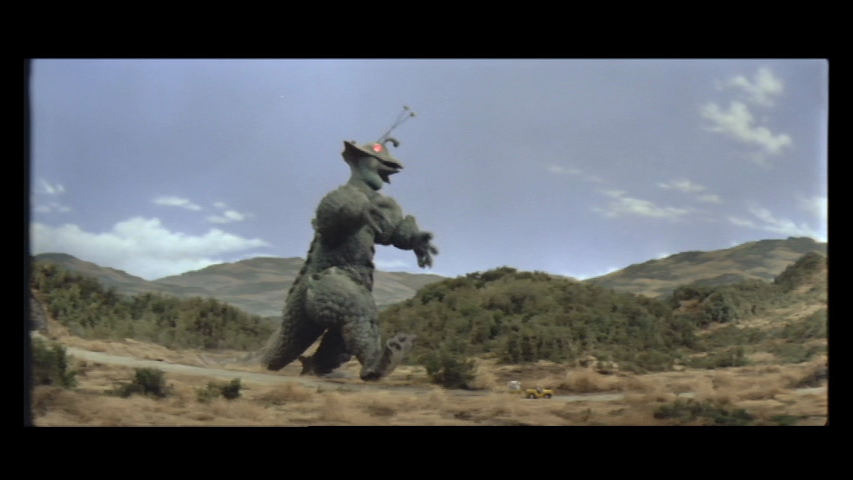 … until we finally reach the culminating showdown between the enraged beast and the finest fighter pilots that  the FAFC can muster up in a crisis. Capt. Sano and Miyamoto bait Guilala with an irresistible stash of atomic fuel that leads to a wacky chase scene as they lure the monster into a trap. He’s doused with the only substance that has a chance to slow the beast down: Guilalanium, a compound so exotic that it can only be synthesized on the moon (necessitating another quick trip by Lisa to the lunar base, just to ratchet up the suspense to almost unbearable intensity as Earth awaits the scientist’s return.) Though Guilala gets the satisfaction of taking down a few more enemy aircraft, the attack succeeds, reducing the fearsome alien to a big steaming pile of… 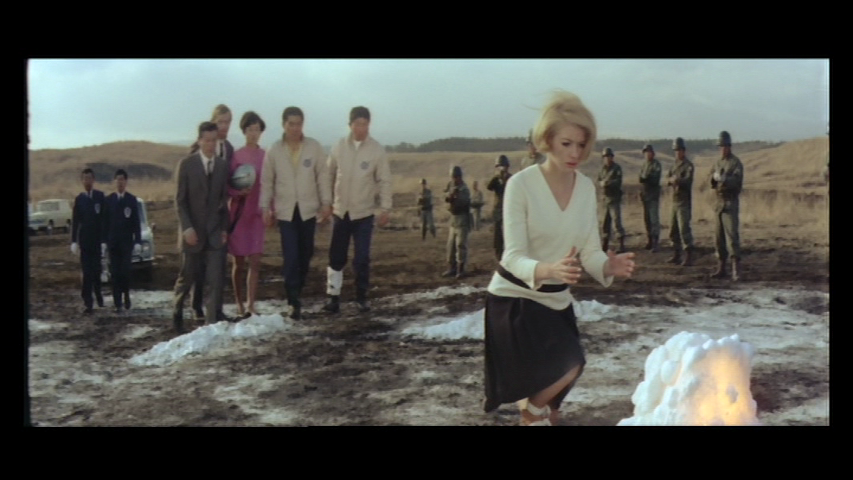 …SHAVING CREAM (be nice and clean…) A few anti-climactic moments later and the unconquerable menace is once again conveniently portable and harmless, soon to be blasted off to a place “billions of light years away from here” where Guilala can never bother our planet again… or so we thought! As it turns out Guilala did come back to Earth, in 2008 as a matter of fact, in a satirical sequel titled The Monster X Strikes Back/Attack the G8 Summit, produced by the very same studio some 40 years later. It looks like the stage is set for a future Eclipse Series release, “When Horror Returned to Shochiku.” 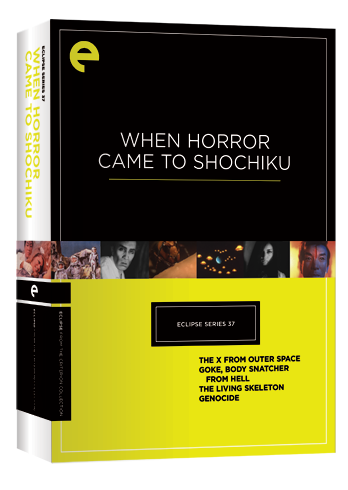 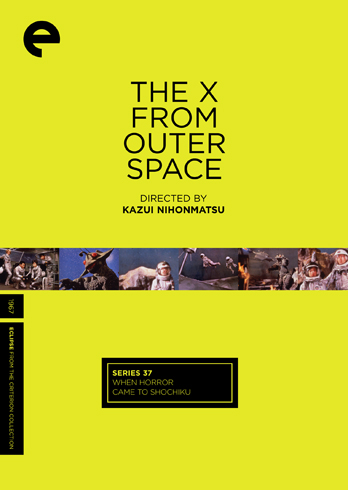