Crossing The Streams: September 2020 On The Criterion Channel, OVID.tv And MUBI 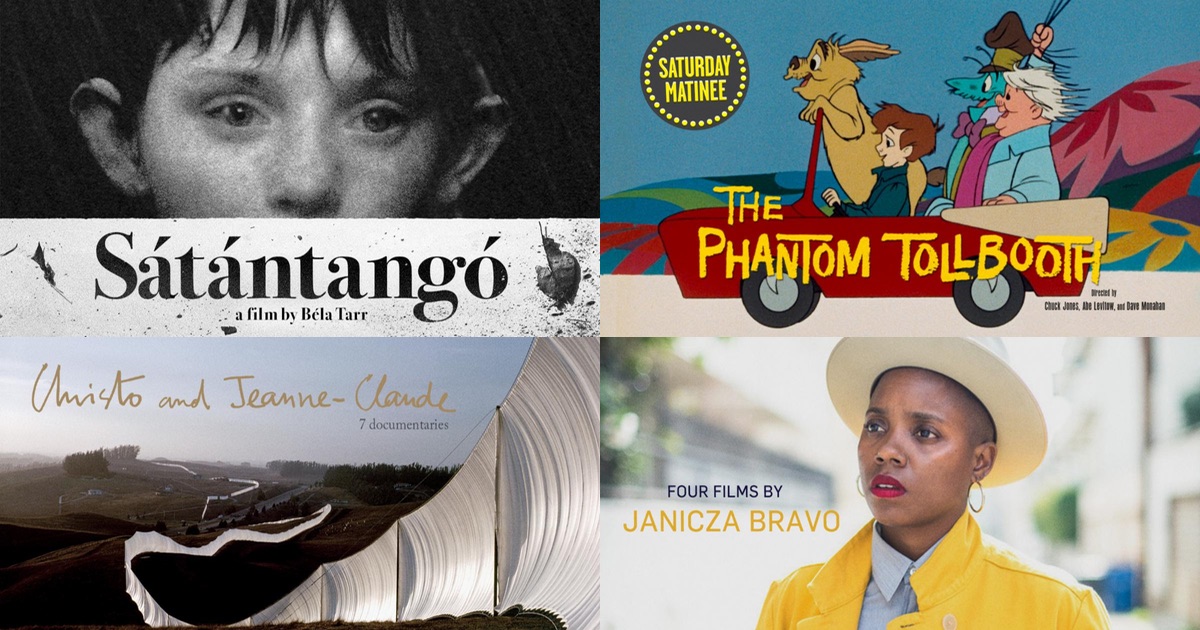 Starting off this month’s streaming roundup is a trio of films from documentary luminary Robert Greene. A master of the “hybrid” style film, Greene has spent the majority of his career blurring the line between the worlds of fiction and non-fiction cinema, in turn crafting one of the more influential and important filmographies in modern documentary filmmaking. The pair included here are Actress, his masterpiece Kate Plays Christine and the underrated Bisbee ‘17, a trio of docs that are as singular as any of this era. Already mentioned my fondness for Kate, but the film also feels like a perfect starting point for those new to the director, despite being made well into his career. Quite literally born out of the very experimenting between fact and fiction that makes Greene an important director, the film feels like a Rosetta Stone for those trying to connect with his filmography. A trio of absolute knockouts here.

The second of five straight director collections, Janicza Bravo gets the spotlight here, in anticipation of her forthcoming (and completely incredible) Zola hitting whatever theaters are open come its release date. Four of the director’s short films are included here, including Gregory Go Boom, Pauline Alone, Woman In Deep and Man Rots From The Head, all of which are varying degrees of surreal, portraits of those on the outskirts of society trying to search for connection in an increasingly cruel world. Bravo is an incredibly skilled and textured filmmaker, making often dry and in many cases quite awkward comedies that come alive thanks to an impossible amount of humanity that Bravo seems incapable of avoiding. Her films are textured and nuanced thematically, making them essential portraits of modern American life.

I mean, this one’s hard to ignore. Collecting five films from actor-turned-director Albert Brooks, this collection brings together well regarded masterpieces like Lost In America with underrated classics like Mother and Defending Your Life. A filmmaker who works all too rarely, Brooks is a master of the sardonic comedy, crafting portraits of everyman lead characters as they face everything from relationship issues to familial trauma. I myself am particularly fond of Defending Your Life, an underrated comedy that finds Brooks at his most broad narratively, and yet his proverbial knife is rarely as sharp, getting at deep seeded human truths that, paired with the superlative performances and whip smart sense of humor, make for a film that’s truly unlike any other.

Speaking of films unlike any other, the next director sidebar we’ll focus on here is one looking at director Lucrecia Martel. While La Cienaga has been on the channel for a minute, and Zama has been more or less widely available since its theatrical run in 2017-2018, the real highlight of this threesome is The Headless Woman, maybe Martel’s best and sadly hardest-to-find work yet in her career. A haunting and politically sharp dissertation on the abuses of the Argentine ruling class, the film remains a monument to Martel’s revolutionary politics and filmmaking aesthetic, coming out some 7 years after her debut feature and finding the director at her most assured and experimental. Not the best place to start for those new to the director, it is absolutely the most must-see film new to the service in September and remains one of the greatest films not just of the ‘00s but of film itself.

The Films Of Agnes Varda

The final director sidebar here is the biggest. Coming right after the release of the seminal Agnes Varda box set, Criterion has more or less brought that very set to the streaming service, bringing well over 35 features and shorts to the service in September. Now, some are already available, but the fact that they’ll be having available not just these films but “extensive supplemental features” from the box set makes this one of the great additions yet in the history of the channel.

And now they’re just getting greedy. Bringing together 63 films, Criterion Channel in September will place in conversation a number of films that are made out of adaptation. Playing as much as a Film 101 class as an English 101 class, this series brings together the very best of the best from the world of literary adaptations, ranging from golden age adaptations like The 39 Steps to modern ones like Certain Women from Kelly Reichardt. Here’s the full list:

The Prison In Twelve Landscape

As we near the conclusion the Criterion Channel section of this round-up, one of the more exciting recent releases that the company is adding is The Prison In Twelve Landscapes. Now, I hesitate to talk about the film too much as spoiling the thematic and intellectual discourse that it will cause for anyone who sees it is almost criminal, all I’ll really say is that as this country continues to burn due to our insidious hindrance on a toxic police state, director Brett Story’s thrilling and explosive look at the destructive nature of police and prisons is a truly essential and deeply felt experience. A director of incredible insight, Story’s superlative dissertation on the insidious nature of America’s prison state is a textured and nuanced primal scream that stands as one of the 10’s greatest documentaries.

And finally, the first film from beloved filmmaker Kathryn Bigelow. Starring Willem Dafoe, The Loveless tells the story of Vance, a rockabilly biker who leads a gang that, on their way to a race in Daytona, rolls into a small town and ultimately sends that very town into utter chaos. The film is a far cry from the Zero Dark Thirty style film that Bigelow would go on to make later in her career, yet stands as one of her most thrilling and exciting works to date. Very much in keeping with her interest in masculinity, the film is a strangely sexy and thrilling drama, with Dafoe at his most brooding. It’s been a film long discussed in connection to The Criterion Collection, as it’s a relatively hard to find first feature from a renowned director, and it’s also inarguably one of her best and most exciting films yet.

First of two collections added to OVID in September, this series collects seven films made by director Marlon Riggs. Led by his masterpiece Tongues Untied, this also brings together Affirmations, Anthem and Non, Je Ne Regrette Rien, among others, all standing together as shattering and beautiful portraits of life in America as a black queer man. Gorgeous ruminations on sexuality and gender, these four features and shorts are essential viewing in 2020. Here’s the full lineup:

Collecting seven silent films, this entire series is a set of films I haven’t seen so ultimately I can’t speak to the quality of them, but to see a service add a great number of silent era adaptations of Shakespeare plays is beyond exciting. I’m particularly fascinated by the 1899 King John picture, a film I’ve barely heard of let alone actually seen. These are all restored and brought back to life thanks to the BFI, from nitrate prints so these are maybe the most exciting streaming additions from the entire September slate.

Now onto MUBI. Initially released in 2006, this new restoration of Maria Saakyan’s debut feature The Lighthouse is coming to MUBI in September. The first film ever directed by an Armenian woman, The Lighthouse made waves again after hitting Rotterdam 2019 in a new restoration, and while I can’t speak to its quality as I haven’t seen it yet, it sounds like one of the more fascinating explorations of life in Soviet-era Armenia that you’ll ever see.

Now onto a film I’ve not only seen but written about. Here’s my take from a roundup at this year’s PIFF:

Speaking of Robert Bresson, one of the festival’s shorter features owes a great debt to the legendary auteur. This hybrid docufiction from directors Maya Kosa and Sergio da Costa has been billed as some sort of Diary of a Country Priest riff, which may sound pompous but it’s not entirely wrong. The film introduces viewers to Antonin, a rat breeder at an isolated bird rehabilitation center, a rehab center that doesn’t just bring birds back to life or put them out of their misery, but more or less attempts to do the very same for those men and women who also call it home. One of the more radical films in this year’s PIFF lineup, Bird Island is an empathy bomb, an almost experimentally humanist portrait of a giver of life to things born to be eaten at a place where broken things go to get fixed. Gorgeously shot and deceptively simple in its framing, Kosa and da Costa craft a brazenly tranquil film that concludes with a gut punch of a final sequence.

Directors Hou Hsiao-hsien and Edward Yang get the spotlight starting on September 5, with a series launching looking into the directors and their influence on the burgeoning New Taiwanese Cinema movement. Highlights of this series include that very series-launcher, The Terrorizers and the brilliant Hsio-hsien film A Time To Live and A Time To Die, both of which find directors at the early stages in their careers and yet also prove just how assured and almost fully-formed they were as craftsmen.

Love And Loss And Liberation

Finally, concluding this month’s streaming roundup is another series of films I haven’t seen but sound absolutely essential. Billed as two gay films by Arthur J. Bressan Jr., Gay USA and Buddies arrive on MUBI near the end of September, and these explorations of gay life in the 1970s sound utterly fascinating, particularly the latter which is described as the first film to focus explicitly on the AIDS pandemic, the very thing the director himself would later die of just two years after the film’s initial release. These are two absolutely must-see films.