As the leaves change color and the temperature outside drops considerably, one would assume that the go to film for those looking to best represent that change in the type of films they watch would jump directly into the world of horror films. October has just passed us by however, and with November, comes a new genre of film being thrust into the spotlight.

Deemed as ‘Noirvember’ by many online, cinephiles are taking to their couches and digging into the genre of film best known as film noir. Featuring dames, morally ambiguous leads and faster dialogue than a Tarantino film, film noir is not only one of the most singular styles of film that cinema has to offer, but it’s also one of the most entertaining and intellectually stimulating.

And it’s a deep one as well. People may automatically jump to films like Out Of The Past or Double Indemnity as the go-to classics within the genre, but with a history of being fodder for underrated ‘B’ pictures, film noir is rife with both brilliant films, as well as brilliant filmmakers.

Anthony Mann is one of those directors. Criterion-approved for his melodramatic classic The Furies, Mann is a truly beloved filmmaker, but has a handful of underrated gems amongst his filmography. One such gem is his Farley Grainger-starring noir, Side Street.

Grainger stars as a man who, after discovering that he’ll soon be a father, robs the office of a lawyer. Co-starring Cathy O’Donnell (who also teamed with Grainger in the equally superb They Live By Night), Side Street is a taut crime procedural looking at a man willing to do just about anything for his wife and pending child. Beautifully crafted by Mann, this film is a gorgeous bit of ‘˜50s noir that not only features two great performances, but features one of the era’s first great car chases.

As an Anthony Mann film, two things here are inherently true. A great actors director (just look at the stagey performance given by Barbara Stanwyck in The Furies), he also had a truly assured hand behind the camera. The black and white photography here is quite stunning, and Mann pulls out all the stops with his camera. Be it era-defining helicopter shots, or proto-documentary style shots of New York City, the opening voice over defines Mann’s stylistic view on New York. Calling it an ‘architectural jungle’ that is both kind and cruel, busy and lonely, NYC is given a hustle and bustle aesthetic that is both full of life, and icy cold. Rigid, NYC plays a perfect backdrop for this story of a man driven to the edge to support his family. Mann never allows the viewer, or his characters for that matter, to get on their feet, giving the characters a twisty narrative and the viewer an uneasy aesthetic, blending high and low shots, with the stiffness found inherently in its location. Concluding in what is only able to be described as one of the most thrilling car chases in all of cinema, Side Street is every bit as good visually and artistically than any film noir of its era.

Both Grainger and O’Donnell are great here as well. Grainger proves to be one of the genre’s most underrated stars, as his turns in both this as well as his O’Donnell starring They Live By Night are superb. There is an ‘everyman’ sensibility to his performances and while he may not look like you or I (he is, after all, a truly gorgeous man), there is something about his beauty being thrust into a murky world of theft and betrayal like the one here that is so damn thrilling. His relationship with O’Donnell’s romantic lead is palpable and real, and their chemistry adds a level of emotional depth that many noirs simply do not have. Very much a relationship drama with noir trappings, we miss the femme fatale here, but in genre laced with relationships built around deception, Side Street‘s strength comes not only from the two performances at its center, but their relationship to one another both narratively and aesthetically. Their story of a newly married couple is universal. Vibrantly in love, the pair are with child, and the hardships they face feel real and impossible not to relate to. It’s a humanistic story tossed inside of a stylized bit of film noir, making it unlike many of its contemporaries.

There is a solid dual disc release featuring this and also They Live By Night, that gives the disc’s owner two very insightful commentaries, but Criterion could do wonders with a film like this. Mann is a Criterion-approved filmmaker, and while this may not be as loud and melodramatic as The Furies, Side Street is every bit as important a feature film. Featuring two brilliant performances, Side Street is easily one of the best and most esoteric underrated gems out of the film noir canon. 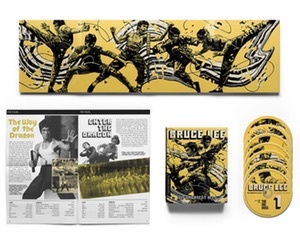