While we here at The CriterionCast have proclaimed our appreciation for the work of one John Ford (just last week we highlighted his brilliant silent picture Upstream as a possible Criterion Collection choice), but in a week that sees a new release from the Superman franchise, his name seems oddly topical.

Often described as one of the central players creatively in one of the greatest Superman stories ever told, Jeph Loeb’s Superman For All Seasons, the idea of a mysterious existential figure coming to the rescue of those in need is one of the major themes at play in the genre Ford helped make famous, Westerns.

And there is one Western in particular that deserves to be seen as the near masterpiece that it truly is. 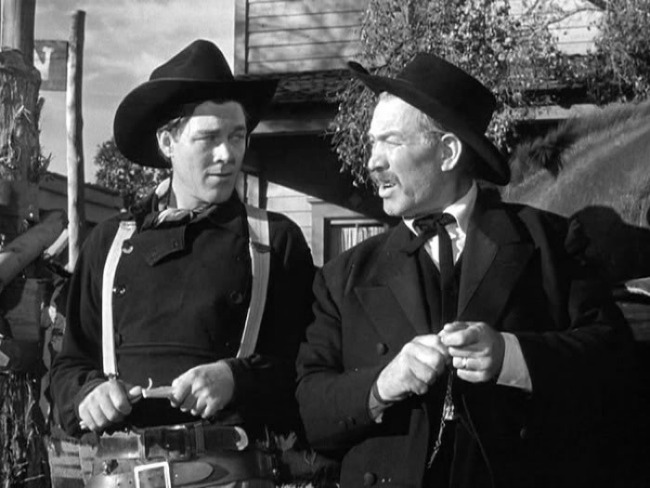 Entitled Wagon Master, the film is likely cast away as nothing more than a genre curio do to its lack of Ford staples John Wayne or Henry Fonda, but it’s no less important and influential. The film follows the story of two cowboys who, after meeting a group of Mormon travelers, guide them to the San Juan Valley. On their journey then encounter everything from thieves to the natural elements in what is one of not only Ford’s greatest westerns, but one of the best “range” westerns ever made.

Opening with a brooding introduction to a group of scoundrels known as the Cleggs, who rob a saloon only to shoot its bar keep, the picture thrusts you into a world that feels oddly familiar, and yet never allows you to get your footing. With a gunshot sending us into a rather warm and inviting theme and, finally, the actual title cards, Ford’s film opens with as percussive a beginning as any of his pictures ever would, and it’s absolutely thrilling.

Ford is at the top of his game here, and while he shot some of the film outside of the famous Monument Valley (the production split time there at in the Moab Valley), this feels as close to a definitive Ford Western picture as he would ever craft. There is, as with many of his films, a melancholy love for the West, and its felt from the very first word sung in the opening theme from the Sons Of The Pioneers.  The opening theme is a rousing, but ultimately sad, meditation on leaving your life behind, and it fits this type of film like a worn in saddle. 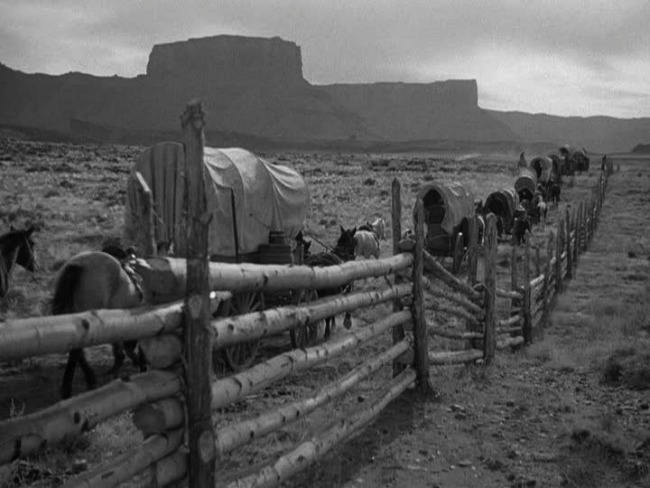 When we are introduced to our leads, it’s in one of Ford’s typical grand openers, with two men on horseback opposed by the brooding black and white landscapes. Some sequences here, particularly those of the wagon group taking their journey, are some of the most beautiful sequences Ford had ever filmed, and the nighttime sequences are absolutely life-changing. It’s a tour-de-force for Ford, and is possibly the best Ford Western that most people haven’t seen.

It’s also one of Ford’s most plaintive. It’s a rather straight forward film aesthetically, seemingly finding Ford at his most thoughtful. Seemingly infatuated with everything from the wagons themselves to the terrain that they are crossing, the camera rarely if ever breaks a stride, instead staying as static as the mountains that it frames. But then again, that’s as close to a core idea as Ford ever portrayed on screen. At the very core of the filmmaker’s canon, possibly even closer to his heart than the idea of building a world in the west, is the dichotomy between man and nature. Arguably the first true man-versus-nature films, shots of men and women going, with full hearts, against nature and making their way over previously unseen terrain is a core ideal within Ford-ian cinema.

That also forces the performers, and the screenwriter, to be at the very height of their powers. Thankfully, the script here is superb, and the cast is top notch. The picture stars the likes of Ben Johnson and Harry Carey Jr., both of which are perfectly cast here as the two leads. Their chemistry is fantastic, and they give great emotional depth to a picture that carries with it both love for the West and also a great deal of dread. Charles Kemper’s performance here as Shiloh Clegg is also of particular note, primarily due to the gut punch that comes with the film’s finale. The final act of the film is a roller coaster ride of character development and also some high strung action, culminating in an interchange that speaks volumes about the code of the West. He also plays a great foil to the two young wagon leaders, and steals the show in his few sequences. Otherwise, Johnson, to yours truly, is the star of the picture, seemingly born for this type of role. Likely his best work on the big screen, this is Johnson’s definitive performance, and the peaks and valleys he travels are really quite thrilling. He’s also perfect opposite the far more kinetic Carey Jr., who may be the film’s most energetic aspect.

In a world where Westerns are seen as nothing more than a dated genre full of good ol’ boys and the occasional bit of casual racism, Wagon Master is the type of near masterpiece that could change anyone’s opinion. While there is the occasional flaw and the occasional comment referring to the lack of musical acumen held by a Native American group, the film is a both loving and dark meditation on the idea that is the West, and also one that is as warm as a freshly lit fire. 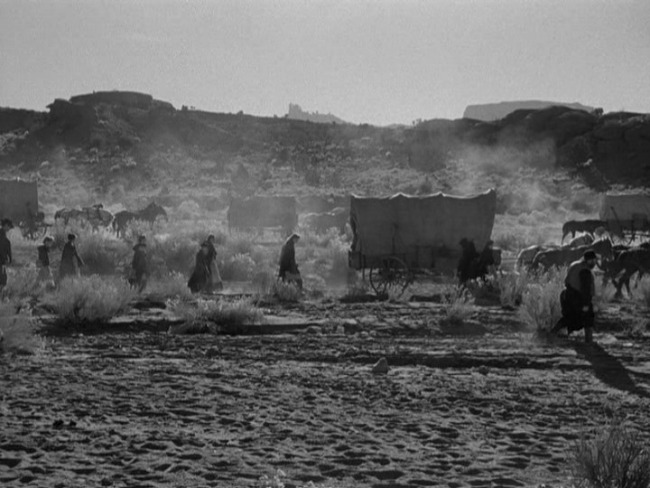 But what about a Criterion release? A handful of years back, Warner released a rather solid DVD of the film, complete with Peter Bogdanovich commentary, but a Blu-ray is more than needed. The film is one of Ford’s most beautiful and plaintive pictures, and a new restoration would be absolutely thrilling. Toss in a retrospective and a new visual essay from someone like, say, Tag Gallagher, and you’d have a must-own release. One can only hope.