When thinking of a film to return to this series of articles, I racked my brain constantly. So many films came to mind, favorites of mine that I would geek out like crazy if Criterion put out in a supplements laden edition. But the harder I thought about it, I wanted to find a favorite film of mine that pushes the audience. Not only now when people watch it but back when it was first crafted and came out in theaters. My brain went ‘duh’ and I had my pick right from the get go. That film is Toshio Matsumoto’s Funeral Parade of Roses (Bara no sÃ´retsu) from 1969.

A film that delves into sexual identity, which I think is more relevant now than ever. A forgotten film, sadly, that gets passed over when people talk about the avant garde films that influenced them. Why has this film been passed over in the years since it came out? I first caught it in college, when a friend of mine who I liked obsessed over it. She was surprised that I wanted to see it, but I’m a rebellious sort and she had a bootleg copy so it was a perfect fit. And when I finished the 107 minute run time, I asked her to restart it. She was confused. It wasn’t that I didn’t get it. It was that I was so mesmerized by Matsumoto’s 60’s Japan, the rebellion on screen had me from the very beginning. And the main character of Eddie (played amazingly by real life transvestite entertainer Peter, who appeared in Kurosawa’s Ran as Kyoami the Fool) just made me feel for him and his journey through the gay club scene in the Tokyo underworld.

A take on Sophocles’ Oedipus, Eddie deals with a rival drag-queen (Osamu Ogasawara) for the love of a cabaret manager/ drug dealer Gonda (Yoshio Tsuchiya). When all is said and done, much blood is spilled and ends with a climax you could never see coming. All throughout, Matsumoto throws every trick and love of pop culture on his canvas. Animation, comic books, graphic design mingling with sex, drugs, rock and roll and extreme violence make for a harrowing viewing and one you won’t forget. A film that will make you question film production and why isn’t it always as gutsy and daring as this one. It might not be for everyone, but as I said earlier, Criterion is a place for challenging films and I believe this one is ripe for rediscovery from the Criterion corps.

Eureka!, via their Masters of Cinema line, put out a great edition back in 2006. It was the first time the film had been released on home video in another market that wasn’t Japan, which still surprises me. Toshio Matsumoto provided the print himself, which was given a beautiful shine to and looks absolutely beautiful in its stark black and white. It had a commentary with Matsumoto himself, which I think would be ideal for Criterion to get if released here. And there was also a great video interview with him, speaking about the film and his career. I would wish for a longer interview or a documentary on his career and what it means to art house cinema and what influence he’s had on others, namely Stanley Kubrick’s classic A Clockwork Orange. Jim O’Rourke also wrote a fantastic piece in the booklet, so it would be great to get that and other scholarly text by film critics who would want to contribute.

One extra I think that would be essential is the short film Toshio Matsumoto made during the making of this film called For The Damaged Right Eye, which has some of the same scenes in its 13 minutes of run time. These are presented in split screen mode. I’ve put the video down below after the original trailer, but it needs a lot of work on the print, which would be amazing if they did so. Maybe he has a print of this, as well as other shorts he made and various other experimental and documentary pieces he did over the years. He is a director Criterion should focus on sooner rather than later and I would love if they started with his most influential work of art. Are you listening, Criterion? I hope you are. And if you have any of your own suggestions and what films should be focused on this series, please let us know.

And right here we have an amazing Three Reasons video by the one, the only Robert Nishimura of Primolandia Productions.

As well as one cover he designed which I think would be very intense in someone’s collection. 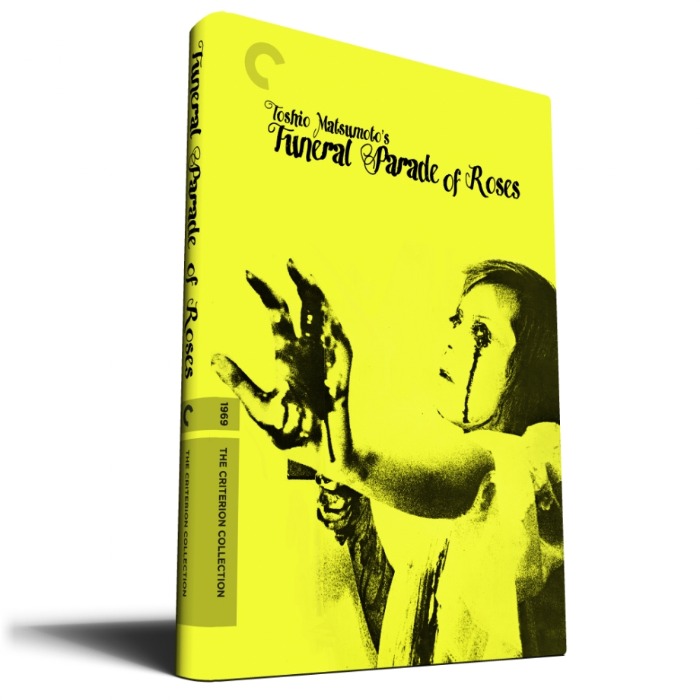