The chrysanthemum has, in Japan, a sort of dual meaning. On one hand, the Chrysanthemum Throne is another name for the position occupied by the Emperor of Japan, and by extension to the seat upon which he sits for ceremonies. But they also, especially white chrysanthemums, represent lamentation or grief. In European countries, they’re mainly used for funerals. These disparate preoccupations are at the center of Mikio Naruse’s 1954 film,  Late Chrysanthemums, about a group of former geishas now given to squabbling over money to make ends meet. They’re said to be friends, but only in the sense that they once were friendly; their acquaintance now is almost purely business.

This is largely because Kin (Haruko Sugimura), our protagonist, acts as landlady to her former coworkers, and nearly all their interactions are initiated when she comes to their houses to collect rent, of which they invariably come up short. It gets to the point where Kin is surprised when they have any money at all, though she still comes through the back door to ensure they don’t escape upon noting her arrival – she doesn’t expect anything, but she wants to hear them say it. Sugimura is a familiar presence for anyone versed in Japanese cinema, having appeared previously in Ozu’s  Tokyo Story,  Early Summer, and  Late Spring. Her screen persona in all those (plus Naruse’s  Repast, previously covered in this column) is not a pleasant one, defined most strongly by her self-righteousness, which translates alternately into selfishness and the general belief that she knows what’s best for everyone.

That image is well-served here, as the audience is left with plenty of reasons to hate her (in addition to the hostility her tenants directly demonstrate, they talk nastily behind her back, even wishing her death), but given enough of a peak into her background to also sympathize tremendously. We quickly come to find that her former lover induced her into a double suicide attempt, the details of which become even more sordid as the film progresses, and a late reunion with another, more idealized lover, demonstrates how impossible it is for her to open up to anyone. Even her live-in assistant, a deaf girl, is a reflection of her desire to wall herself off from those around her. 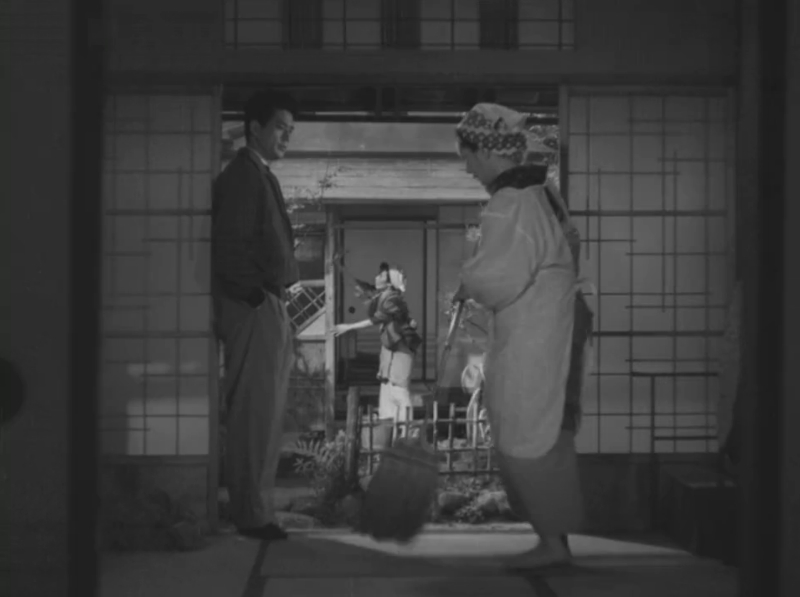 Adapted from a story by Fumiko Hayashi (whose work Naruse also adapted into  Repast and  Wife),  Late Chrysanthemums is surprisingly low on actual story. While in many films that leads to a true investigation of character, I found this film relatively short on that front as well. It’s an interesting enough film, but seems to take place well after these characters have exhausted most of their drama, and nearly all of their introspection. They’re very set in their ways, making for a somewhat rigid experience. It’s interesting to see Naruse reflect on the character types he usually deals with as they age, but his view on aging feels like it takes on kind of a stasis.

I wouldn’t be particularly eager to see this on Criterion Blu, aside from my general hope that all of Naruse’s films will one day be available on whatever platform on which we may wish to view them. I’ve mentioned before that an Eclipse set including his Fumiko Hayashi adaptations would be suitable and delightful, and even with my reservations, this would be a perfect inclusion. Box sets are more than just a way for cinephiles to grab several movies at a lower price – they call for contextualization, to view each film as a part of a body of work, or at least a part thereof.  Late Chrysanthemums takes familiar Naruse archetypes towards middle age and beyond, asking us what would become of these people so dependent on youth to pay the bills. And in the way, it’s a beautiful, tragic little film.