Tackling the story of Joan of Arc is no small task, but it’s also not a terribly uncommon one. All in, including TV movies, shorts, and filmed accounts of stage shows, there have been nearly forty attempts to transform her story into cinema. Filmmakers as diverse as Georges MéliÃ¨s, Cecil B. DeMille, Victor Fleming, Roberto Rossellini, Otto Preminger, Irwin Allen, Paul Verhoeven, Werner Herzog, Jacques Rivette, and Luc Besson have directed actresses such as Jean Seberg, Hedy Lamaar, and even Milla Jovovich in the lead role. Ingrid Bergman played her twice, once for Fleming and once for Rossellini.

Undoubtedly, the shadow that looms largest is Carl Theodor Dreyer’s The Passion of Joan of Arc, starring Renée Jeanne Falconetti (credited in the film as Melle Falconetti), one of the defining works of cinema of any subject. It’s difficult to imagine any filmmaker wringing from Joan’s story a more  indelible  piece of cinema, or perhaps any form of art. One should approach Robert Bresson’s 1962 film under such an assumption, if for no other reason than Bresson’s aims were very different than Dreyer’s were in 1927. He was not unaware of this distinction, and indeed flaunted it, decrying the performances in Passion as “grotesque buffooneries,” and concluding, “For want of truth, the public gets hooked on the false. Falconetti’s way of casting her eyes to heaven, in Dreyer’s film, used to draw tears.”

Few tears will likely be shed during Bresson’s film, but we’d be well advised to take our cues from he and Dreyer’s choice of titles – Passion versus Trial. Like Dreyer, Bresson drew his screenplay from the surprisingly-robust accounts of Joan’s trial and subsequent execution, but unlike Dreyer, he focuses away from Joan, on the machinations of the legal proceedings of the time (the French title, ProcÃ¨s de Jeanne d’Arc, is informative), leaving us with quite a different impression, but no less sympathy. 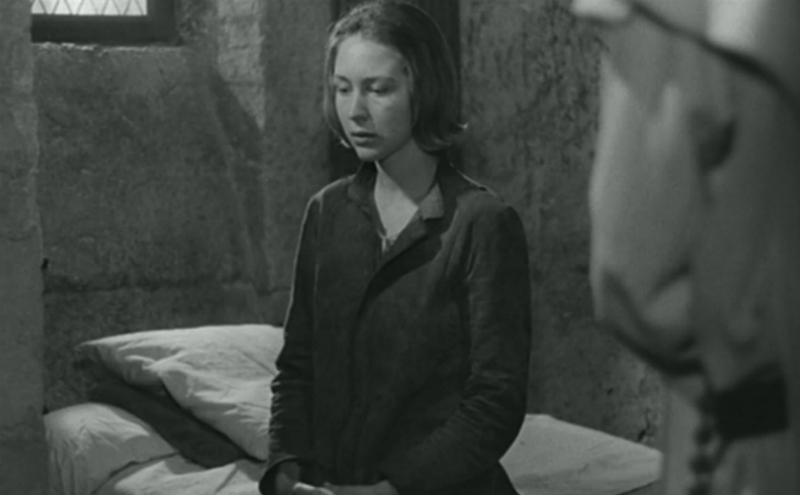 Joan is assaulted with a series of questions that she stumbles to answer, never wavering in her intent but uncertain how best to convey her convictions. Florence Delay’s performance as Joan hasn’t always been the best received, to say the least, with both Susan Sontag and Pauline Kael concluding that there’s very little, if any, acting to it at all, with Kael noting that she’s like “a philosophy student taking an oral examination for which she’s overprepared.” The amusing nature of that statement notwithstanding, both sell Delay tremendously short.

As was Bresson’s fashion at the time, he cast Delay from nowhere. She wasn’t an actor, and was in fact in college at the time the film was made. Though she did very little acting after Trial, she did lend her considerable voice for narration, perhaps most notably to the French version of Chris Marker’s Sans Soleil. Her true focus was on writing, publishing in whole or in collaboration over thirty novels, winning in 1983 the Prix Femina, a literary prize awarded exclusively by (though not always to) female writers.

I don’t say all this to excuse Delay’s performance; quite the contrary. Instead, it helps to illustrate that she and Bresson were coming from an intellectual slant in approaching Joan and the film as a whole. Delay exhibits Joan’s tremendous personal resolve while also accounting for her quiet terror at facing a body as powerful as the Church. This is a woman who led armies to battle, but that she repeatedly looks to the ground when questioned is very telling (even though this choice frustrated cinematographer Léonce-Henri Burel, who wanted to capture her eyes). Delay’s Joan seems to believe that so long as she stands her ground and states her intentions and beliefs clearly and plainly, she will remain at least in God’s good grace, if not necessarily the Church’s. 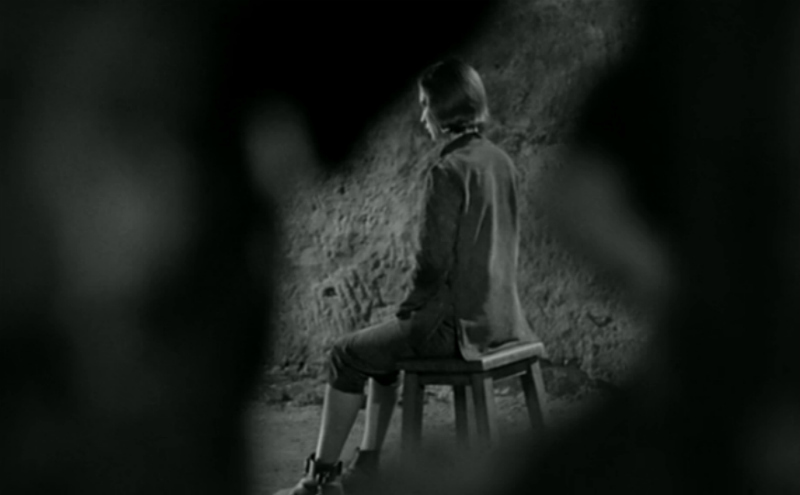 Focusing as he does on the trial, Bresson also examines the external circumstances driving the case against her, a largely patriarchic desire to repress women (references to monetary exchanges are also made). Much is made in many interpretations of the Church’s abhorrence that she should wear men’s clothes, and while that’s a common thread here, Bresson goes considerably beyond it as well.  In trying to determine how Joan has withstood the questioning, imprisonment, and torture, the authorities quickly surmise that she must draw strength from her virginity, and begin plotting to deprive her of that as well. Late in the film, after she’s ordered to wear a women’s dress, Joan states that several men tried to take advantage of her, providing further motivation to return to mens garments.

This more fact-based angle is fascinating, redefining and deepening the more spiritual account so often afforded Joan. Yet while our sympathies can’t help but lie with her, Bresson doesn’t overtly direct them there, relying instead on simple (and since this is Bresson, there’s a special emphasis on simple) human behavior and classic staging to direct our feelings. That Joan so often looks down, humbly, while her accusers stare dispassionately, is more than sufficient.

Presented in standard definition in its theatrical aspect ratio of 1.66:1, The Trial of Joan of Arc joins the ranks of Criterion titles on Hulu that can be best summed up as “sufficient.” Unavailable in the United States, aside from imports, this is surely the easiest way to view the film, and perhaps even the best (screenshots at DVD Beaver do not make the imports look much better, and you’d be dealing with PAL conversions on top of that). As with much of Bresson’s black-and-white work, the emphasis is not on the heavy contrasts but on the myriad tones of gray, which the Hulu transfer does a nice job of representing. It lacks sharpness, certainly, but it doesn’t feel overly compressed and is relatively free of damage.

Given the recent, acclaimed touring retrospective of Bresson’s work, we can only hope this will be on its way, along with a great many others, to Blu-ray. When the retrospective passed through Los Angeles, the Aero Theater paired Trial with Lancelot du Lac  as a sort of Bressons-based-on-historical-figures double feature, so perhaps Criterion could release them as a set. Either way, it’d be great to get some supplements on the critical reception of the film, in all its various shades, as well as Delay’s performance and subsequent career (hell, she’s still alive, so an interview would be amazing). It’d also be great to get a visual essay positioning this film within Bresson’s ongoing exploration of faith and spirituality.

To join Hulu Plus and get two weeks free, click here!