I doubt there’s a genre that I love more dearly than the musical, and yet outside of a handful of French films, I don’t think I’ve seen any that weren’t made in America (or maybe Great Britain). Well, lo and behold, there I am, browsing the list of films available on Hulu, and thinking about how I should really watch something by Keisuke Kinoshita, and notice a little ditty called Carmen Comes Home. Not only is it a musical, but it was the first color film made in Japan, and remains one of its most successful. Who am I to pass it up?

In the film, Hideko Takamine plays Carmen, who ran off to Tokyo some years ago and is returning to visit her friends and family in the small rural village in which she was raised. Her return is far from triumphant, however, as word quickly spreads that the “art” in which she so proudly engages is actually a burlesque show, and her father is so ashamed of her that he can barely bring himself to greet her when she arrives. Carmen brought her friend, Akemi (Toshiko Kobayashi) as something of a buffer, but that’s only doing so much good, as she can scarcely wait to leave as soon as they arrive.

Kinoshita doesn’t spend much time dwelling on the two of them, giving us just hints of loneliness – Akemi missing the lover she recently rebuked, Carmen finding out that you really can’t go home again – but preferring to analyze how their presence affects the community. This came to be the first color film purely for commercial purposes, as Kinoshita was simply hired to make a color film that took place outdoors as much as possible, and Kinoshita’s shot choices often reflect this mandate. He sticks mostly to wide shots, too often sacrificing our engagement with the characters (though this aspect may play better on a screen larger than my 42″ TV) in favor of admittedly handsome vistas. 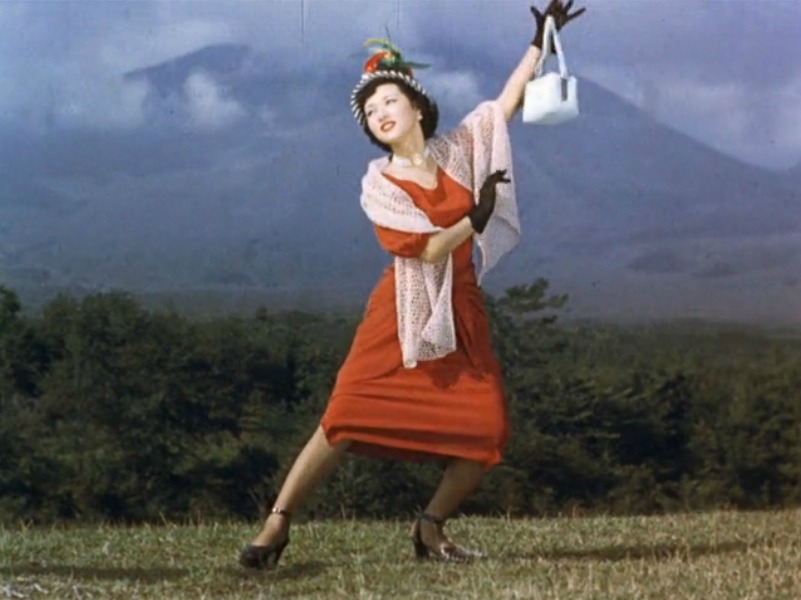 He gained something else with this trade-off, however – the ability to really highlight Carmen and Akemi’s separation from the community. We’re introduced to the village first, where the most exciting color is a clean white shirt, and as soon as the girls get off the train, they bring an explosion of color with them that will forever distinguish them from the villagers. Everything they wear is bold and bright, so even when they’re just walking from one place to another, they seem totally out of place, yet enticing. Our eyes can’t help but be drawn to them, just as the villagers are (though hopefully our motivations aren’t as lascivious).

Whereas American musicals of the era were about as far-removed from any mention of sexuality, Carmen Comes Home is very straightforward about exactly what is going on. Even though it shies away from showing the particulars during their third-act show, the villagers talk frequently about how Carmen and Akemi perform in the nude, and Carmen’s father comes right out and says that she’s almost certainly not a virgin. The overall attitude taken towards this is decidedly more mixed. We’re clearly supposed to sympathize with the father’s remorse, even while enjoying the sight of these two scantily-clad ladies, and there’s an overall celebratory feeling towards Carmen and Akemi’s freedom, even if economics trap them in the burlesque.

Complicating matters even further is the very strong suggestion that Carmen embarked on her way of life due to a cow kick to the head when she was younger (I wish I was making this aspect up). This adds a whole uncomfortable layer to her career and attitudes; what may seem like simple-mindedness could, in fact, be a mental handicap, which certainly makes awkward a scene like the one in which she tries to make herself alluring to her former, now blind, schoolteacher. Takamine doesn’t tip her hand one way or the other, and her portrayal on the whole is kind of remarkable for the way she at once keeps the audience at a distance without her performance itself seeming distant, giving us a relationship to her similar to the one Carmen might to her own audience. Takamine would go on to work with Mikio Naruse several times over (most notably for frequent readers in When a Woman Ascends the Stairs and Yearning), and while her performance here obviously isn’t up to those standards, it’s as intelligent and fun as those are vulnerable and nuanced. 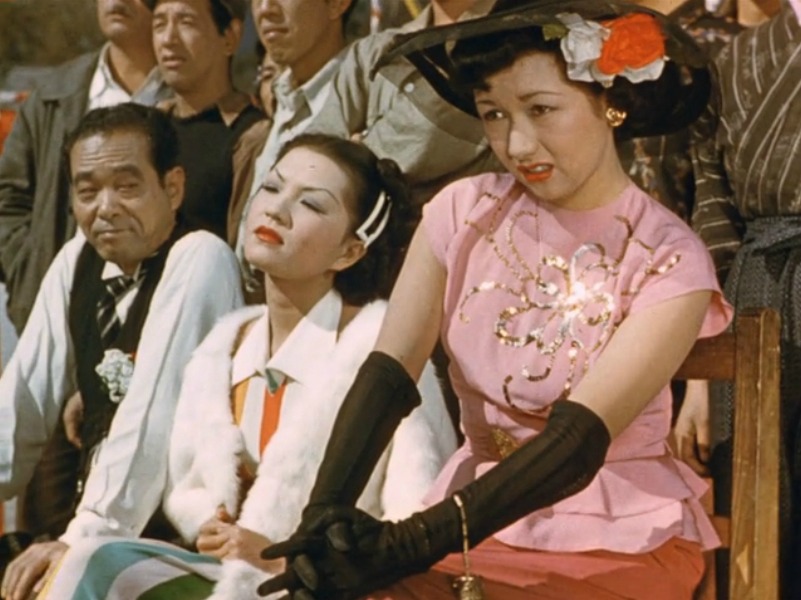 That element of lightweight fun is what carries the film best. Most of the songs are carried by Takamine, and the performative aspect of her work here is on full display, while the rest of the cast is very well-tuned. Some, like the blind schoolteacher, are quiet and reserved (making his embarrassment at a town gathering all the sadder), while others are wildly comedic (Chishu Ryu, while not the most outlandish of the bunch, shows some nice range for those who only know his work with Ozu), and the whole experience ends up feeling richer for it. It’s little surprise that this was such a big hit in Japan; beyond its landmark status technologically, it’s a crowd-pleaser, and one I think still has the same power. I had a lot of fun with it.

Presented in HD(!) on Criterion’s Hulu channel, Carmen Comes Home looks pretty damn good. The aforementioned colors really pop, there’s a great sense of clarity, and while not much depth is present, that feels due far more to the source, and I’d say actually enhances the aesthetic experience of the thing. It gives it an artificial, almost storybook quality. Speaking the source, it clearly wasn’t in the best of shape, so a lot of scratches and other damage marks are still present, but none that distracted from the film, or aren’t familiar to those who’ve seen one of these old prints in a theater. When these older color films (this was a Fujifilm production) are in great shape, few other films can look better, but when they deteriorate, they go fast, and this could definitely use some clean-up. But given that what’s underneath the damage looks so good, it’s easily forgiven. [These screencaps came from my computer, and aren’t necessarily the most representative, as it looked leagues better on my ethernet-connected TV] 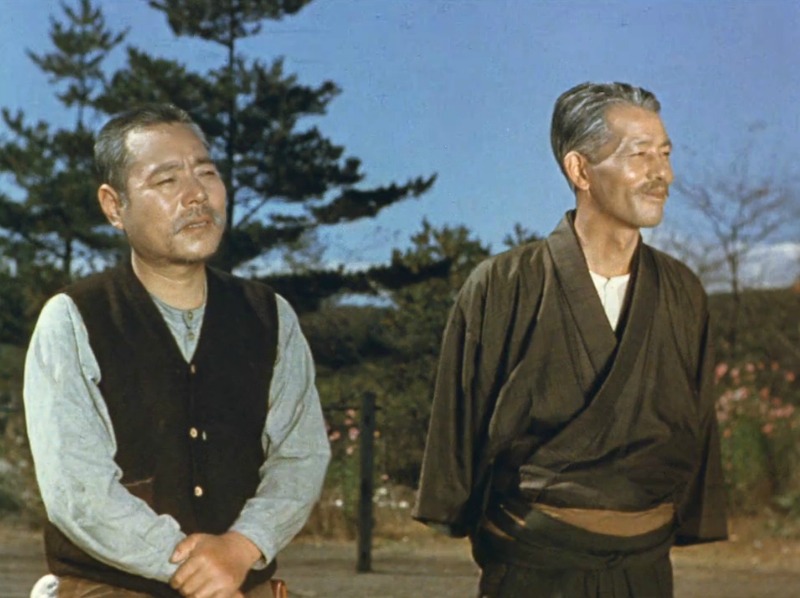 I’d be surprised if Criterion gave this a full overhaul for Blu-ray, though hey, I’ve been surprised before, and they could even include the sequel, Carmen Falls in Love (also directed by Kinoshita, though in black-and-white) as a special feature. However, seeing as the other Kinoshita films in the Collection have few (Twenty-Four Eyes) or no (The Ballad of Narayama) special features, hoping for much might be a stretch. Still, he’s a major figure in Japanese film history who’s been underserved here in the States, and one I look forward to continuing to discover, so while I’m grateful that Criterion has made so many of his films available on Hulu, I hope they do make the leap to disc at some point. This was apparently restored prior to a Kinoshita retrospective at the Film Society of Lincoln Center last year, so hey, you never know.

But this is what’s great about Criterion’s Hulu channel – we’re able to see so many films that really aren’t available any other way. Aside from a few DVD releases in Japan, which might not even have English subtitles, this is really it, and a lovely way to check the film out.