‘With the risk of being misinterpreted, I say that fidelity often plays too great a role in a marriage.’ – Ingmar Bergman

Reports vary as to the practical impetus that drove Ingmar Bergman to make A Lesson in Love, but one thing is for certain – it was not a purely artistic venture. When he began writing it, Sawdust and Tinsel had just been a critical disaster, to the point that some declared ‘Bergman is finished.’ Bergman retreated to Arild, a small coastal town which even today is inhabited by only a few hundred people, with Harriet Andersson, his frequent star and then lover.’Harriet was fond of lying on the beach and sun-bathing, and I wasn’t. So she took up with Erik Strandmark and his wife and every day they toddled off down to the beach, while I rented a tower room, hanging out of an old villa, lay on my back and read amusing books and thought how agreeable life was.

‘Soon I began jotting down little scenes – marital scenes – which I found more and more amusing; and then I thought of Gunnar Björnstrand and Eva Dahlbeck [the eventual stars of A Lesson in Love], and they amused me even more. In a week the script was finished. I thought: I can always chuck this in to Sandrews and Svensk Filmindustri. So I sent it in first to Sandrews, and then, since there they were all away on holiday, to Svensk Filmindustri. Carl Anders Dymling, who, for some reason or other wasn’t away on holiday, read it in a flash, rang me up, and said I was to come up to Stockholm. A fortnight later the film was under way.

‘After 10 days’ preparation, I think it was, we got into production. The whole job was entirely frivolous. And that’s just what’s so good about the film, I suppose – its complete frivolity.”

The first Ingmar Bergman film I ever saw was Smiles of a Summer Night, so perhaps I’m more used to the idea of a Bergman comedy than others, but for all its delightful frivolity, A Lesson in Love seems quintessentially his own. Essentially a comedy of remarriage, we first meet David (Gunnar Björnstrand), a gynecologist on the verge of divorce, as he rejects the advances of one woman while giving marital advice to another before reflecting on his own past dalliances. He then hops on a train to go win back his wife, who’s run off with David’s former best friend, when he runs into a woman whom he knows much better than we’re initially led to believe.

So we get some instances of mistaken identity, love triangles, one scene that rivals any American comedy of the era in its chaos, all driven by dialogue that sparkles even through the subtitles. This is the stuff of classic screwball comedy, filtered through Bergman’s traditional allegiance to flashback and religious debate. When, in an early scene, David and his driver discuss the place of women and men in the world by tying it to the creation story of Genesis, we’re just as quick to say, ‘oh, that Bergman’ as to say, ‘oh, that banter!’ David begins the discussion by suggesting women had to have been created first, and when his driver says, ‘what about the rib?’ (in Genesis, Adam’s rib was removed to make Eve), David replies, ‘who knows? Maybe it ended up further down.’ So, yes, not only can Bergman do comedy, he can do dick jokes. 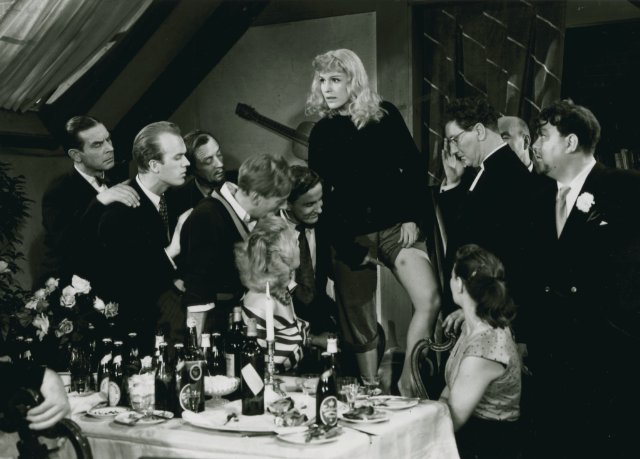 As indicated by the quote with which I opened this piece, Bergman was not a devoted husband. He’d already been through two marriages, and he considered the third to be as good as over, by the time of A Lesson in Love, and would be married twice more in his lifetime (though his final marriage ended in death rather than divorce). ‘To be married is a kind of talent,’ Bergman would say, reflecting on this film. ‘To marry the right one is also a kind of talent. Although I have come to realize that I have no talent for marriage, I am far from adhering to a sour grapes philosophy. I believe in [marriage]. This is made blatantly clear in the film.’

And in his own roundabout way, he’s quite right. As I said, this is a comedy of remarriage, and if you take that to be a spoiler, know that the stakes of the relationship seem no higher than in any other romantic comedy. Bergman came up in the theater, knew Shakespeare backwards and forwards, and sticks fairly strictly to those established forms of comedy and tragedy. He may employ comedy in otherwise dire circumstances (as when Death saws a man down from a tree in The Seventh Seal), but his work announces its overall thematic intent quickly and sticks to the appropriate structure. A comedy, thus, will have a happy ending, and Bergman’s execution of it here is that kind of comedic gesture only he could really pull off, something that’s at once sentimental, metaphysical, sexual, and playful.

Though he would make a more lasting, and in many ways better, mark on comedy with Smiles of a Summer Night, I still came away very fond of A Lesson in Love. It’s a very winning piece of comedy, but it’s also an honest reflection of Bergman’s own shortcomings as a husband. Even as he wishes he and his partners could make peace with their differences, there’s little question as to where the blame must lay in the crumbling marriage, and David’s desperation to win back his wife is classically characteristic of any man left high and dry. For those who admire artistic restraint, you’re likely to be delighted by Bergman’s resistance to his own indulgences, and for those who just like Bergman, well, there’s plenty of that, too.

‘The film was made entirely without any pretentiousness,’ he noted. ‘It was a whim, a caprice. I did not cut deep. I wanted to make a likable piece. I did not want to make any revelations, only to have fun at my own and my fellow human beings’ expense.’

Though unavailable in HD, A Lesson in Love proves one of the better standard-definition transfers on Criterion’s Hulu channel. I was almost fooled watching it on my computer, in fact – contrast is very nicely handled, with deep, endless blacks and bouncy whites, and the image even has a bit of flicker one would associate with a film print. Streaming it to my HDTV reveals a few more troubling aspects, naturally (compression in particular becomes much more evident), but I’ve seen far worse from an SD stream.

I do hope Criterion gets around to a Blu-ray release of this film, especially given their penchant for releasing a barebones edition each month. Pairing this with an essay by a scholar with a background in American comedy of the ’30s and ’40s would be a real treat, to dive into the ways in which this film plays off comedic traditions. Were they to do a bigger package, I’d also love to see someone make a video essay exploring Bergman’s use of flashbacks, which carry an immediacy uncommon to much of cinema, especially here when the flashbacks really are the driving engine of the film. And, of course, any video interview with Bergman would be a delight.

A Lesson in Love is a treat for any audience, but Bergman may have reaped the biggest reward of all. As much as people tag his mid-period work as being his most dour, it’s the early stuff that’s especially glum. But after A Lesson in Love, he was much more diligent about sprinkling humor into it, becoming as much an entertainer as an artist. One can’t help but wonder how much this recollection affected his work to come:

“I went to the premiere of A Lesson in Love. On edge, I paced back and forth in the foyer of the movie theater Röda Kvarn, like a lost soul. Suddenly I could hear from inside the theater one roaring wave of laughter after another. And I said to myself: It’s not possible! They are laughing. They are laughing at something I have created.’