On the Hulu Channel: Kim Ki-young’s The Housemaid

With the announcement that Martin Scorsese’s World Cinema Foundation would be funneling its restorations straight into the Criterion Collection (with what appears to be its own branding and everything), curiosity could help but form around their offerings. Neither company is apparently terribly invested in stalling this, and so the films have, just this very week, quickly shuttled onto Criterion’s Hulu Channel, making this a perfect time to take a look at what’s in store for you.

The good news is that the first film here is a flat-out, knock-down, no-holds-barred all-time masterpiece. I don’t use the term lightly (well, okay, sometimes, but who among us hasn’t gotten carried away and pronounced Wayne’s World as one of the greatest films ever made?). This is the kind of film that, once Criterion releases it and it starts to permeate the cinephile consciousness, will not be delayed in being declared not only one of the greatest Korean films ever made (a reputation nearly cemented at this point), but also one the greatest films ever made, period. The Housemaid a major work of lust, degradation, power, conformity, regret, and repression. 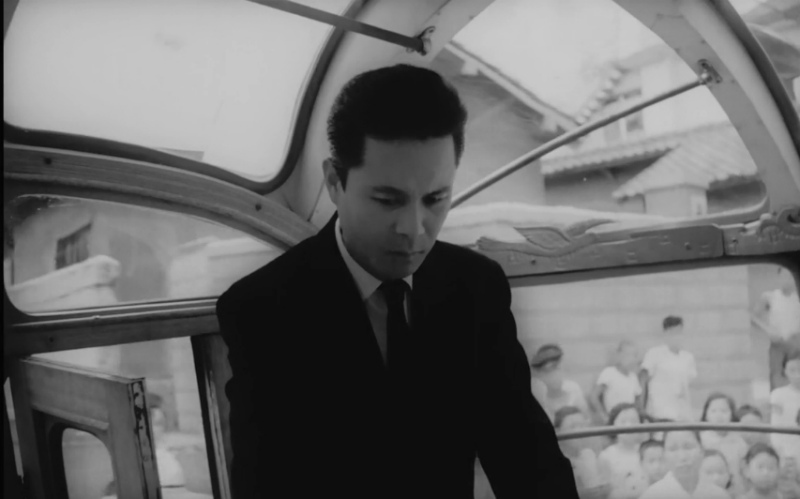 A music teacher at a factory dormitory is trying to move up somewhat in the world, constructing a new two-floor house in back of his family’s extremely tight living quarters. With his wife pulling in some extra cash by sewing on the side, they’re in need of a housekeeper, so he asks his one solo student, who took private piano lessons purely as a means to get near the handsome teacher, to find one for him. Though she obliges, Mr. Kim (Kim Jin-kyu) probably should have been more wary of her selection after she threatens to accuse him of rape, going so far as to tear her clothes in front of him, if he doesn’t make love to her.

Now, the film’s attitudes towards women are not what one might call the most progressive, granted, and will only get wilder as the picture moves forward. In addition to the student, Kim’s wife is the very model of the obedient housewife, who dutifully slaves away at her sewing machine and puts her husband’s needs before all else. Writer/director Kim Ki-young finds a narrative justification in this, however, by stripping everyone down to their most elemental role, spurred by Mr. Kim’s place in their lives and theirs in his. The wife is Wife/Mother, the students are a tittering mass of love-struck girls, his children forever petty and squabbling, and the titular housemaid (Lee Eun-shim)…well, she’s everyone’s nightmare whenever a stranger enters their home. 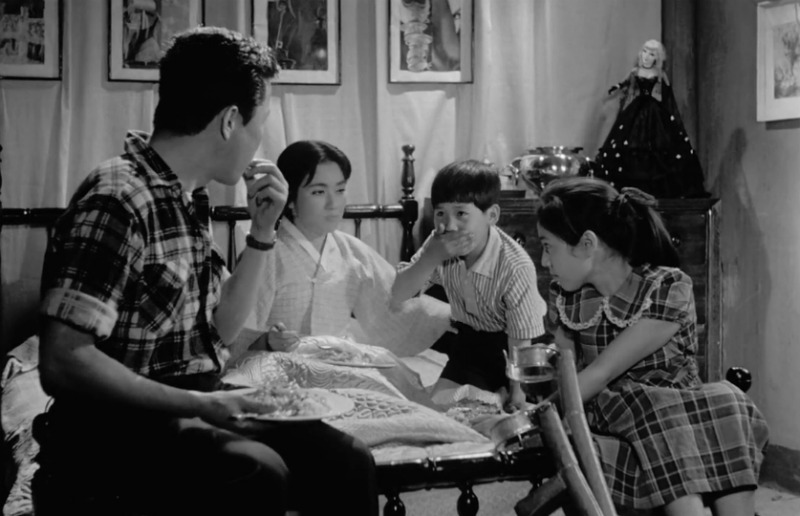 The idea of a housekeeper that upsets the natural family balance is nothing new, and kind of inherent to their role – a family is essentially allowing a stranger to be in their house for most of the day (and often taking up residence with them), come what may. Usually this anxiety takes the form of a did-they-steal-the-silver subplot, but as with Joseph Losey’s masterful The Servant, Kim Ki-young has more audacious psychological concerns.

To begin, he complicates the predicted outcome of the new housemaid – that Mr. Kim will engage sexually with her, a decision that will have disastrous consequences – by having Mr. Kim be genuinely, totally in love with his wife. Their marriage is not an unhappy one, nor as unbalanced as it may initially appear. When her leg cramps, her carries her to bed and massages it long past the time when she said she’ll be all right – “[my effort] is nothing compared to what women go through,” he insists. We’ve seen him resist the advances of several young women in the past, and becomes extremely resistant to even the housemaid. 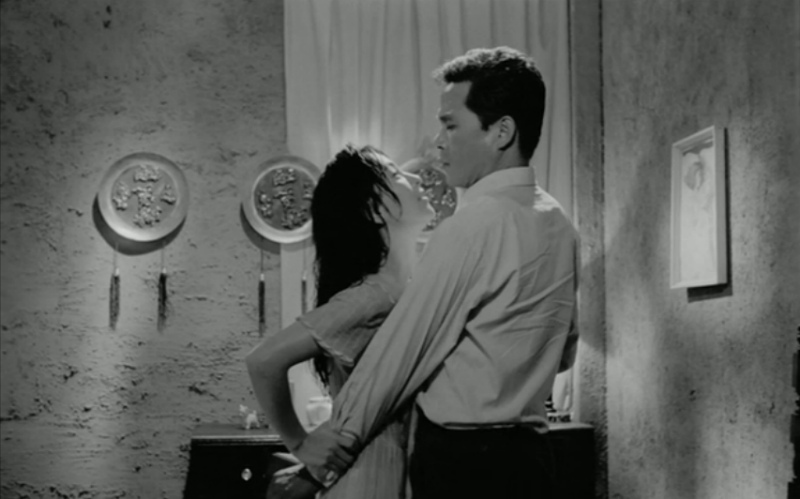 But we all have moments of weakness, what’s the worst that can happen? It turns out, every horrible result you could possibly imagine could happen, made all the worse, as these things often are, by the effort to cover them up and make them go away. Money and status mean everything; there’s the sense that any intermediate unhappiness is only temporary. The eagerness to keep one’s position and perception in society, even as every attempt to regain these qualities will inevitably draw oneself further away, is classic tragedy, and no less engaging here. To spoil anything beyond this point would be a crime. I will simply say that Kim Ki-young soaks so thoroughly in the nightmarish atmosphere of pure dread and disgust with oneself that every moment is at once wrenchingly horrible and peerlessly compelling. I had to pause this film with a half-hour to go, a practice to which I’m quite accustomed, but I had the kind of fervor to get back to it that one usually associates with binge-watching Lost or Breaking Bad. Kim’s direction is so precise, so focused on drawing tension out of each and every moment, you’re constantly on the edge of your seat, yet, because of the content, deeply eager to withdraw as far from the screen as possible. It’s a beautiful balance.

Kim establishes this sensation so gracefully at the beginning, never indicating the depths to which his characters will fall, yet making the tension a part of the whole work. Mr. Kim’s crippled daughter walking up the stairs, his wife balancing some places, a container of rat poison that just will not go away all put things juuuuust this side of the comfortable, happy home Kim is initially depicting. He rarely aggressively foreshadows what’s to come, but these slight little suggestions keep one certain something is coming. 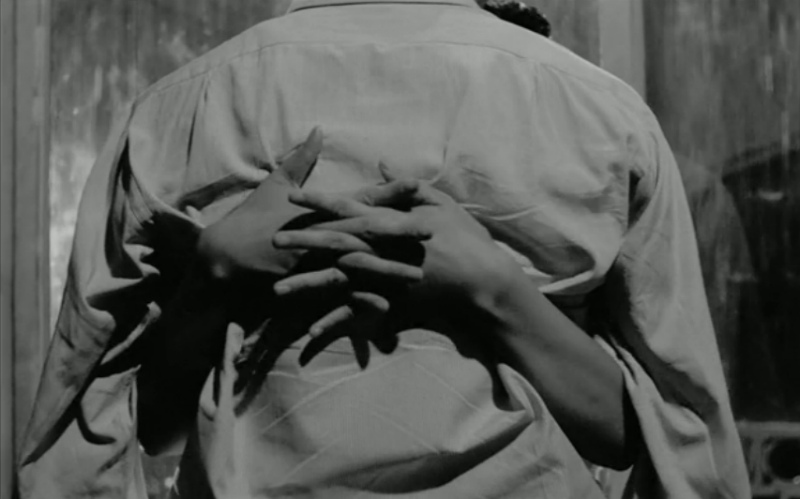 Seeing the film now, the recent “Korean New Wave” seems entirely indebted to it. At the time, I’ve read, Korean cinema was marked mostly by realistic portraits, and The Housemaid was a real landmark film in doing away with that altogether. With modern filmmakers like Park Chan-wook, Bong Joon-ho, Hong Sang-soo, Kim Ki-duk, and Kim Ji-woon all working in various shades of subversive expressionism, it’s well worth going to back to the film that might have begun it all.

Recently restored by the Korean Film Archive with the support of the World Cinema Foundation, The Housemaid is now available in its original aspect ratio, 1.66:1, in HD, on Criterion’s Hulu Channel. The expected Blu-ray release does leave much space for improvement, I should note, as compression artifacts are present throughout, and film grain is nearly scrubbed away. I don’t know if the latter is a result of the former, but I hope this isn’t the cemented state of the film. It’s fairly sharp, however, and contrast looks great. Mostly, it’s more than watchable, just not up to current standards for digital transfers. Two reels were apparently missing from the original negative, and it is abundantly obvious when they had to dip into using a lower-quality source, as frames are missing, and those present are extremely damaged. For those who saw the recent restoration of Metropolis, the sensation will not be unfamiliar, but, though unfortunate, that is the state of things, and I’m just happy to have this film available at all.

Criterion fans have been aflutter as to how the company’s partnership with the World Cinema Foundation will play out. The unique designs certainly suggest something more than a line of single Blu-ray releases (might we hope for a box set?), but hopefully that will not preclude the inclusion of bountiful special features, as it sometimes does (3 Silent Classics by Josef von Sternberg, Pierre Etaix, and Zatoichi: The Blind Swordsman are all rather light in this department). Masters of Cinema just announced their own partnership with the WCF, with each release to include introductions by Scorsese, so we should reasonably expect at least that here in the States. I’d also love to see a visual essay tracing Kim Ki-young’s influence, and how it’s resonated to the modern era, as well as, as always, a commentary by a Korean film expert.

Until then, make do with the streaming version on Hulu. As in, right now. No, don’t wait, are you kidding me? A rediscovered classic of world cinema awaits.

To try Hulu Plus and get two weeks free, click here!