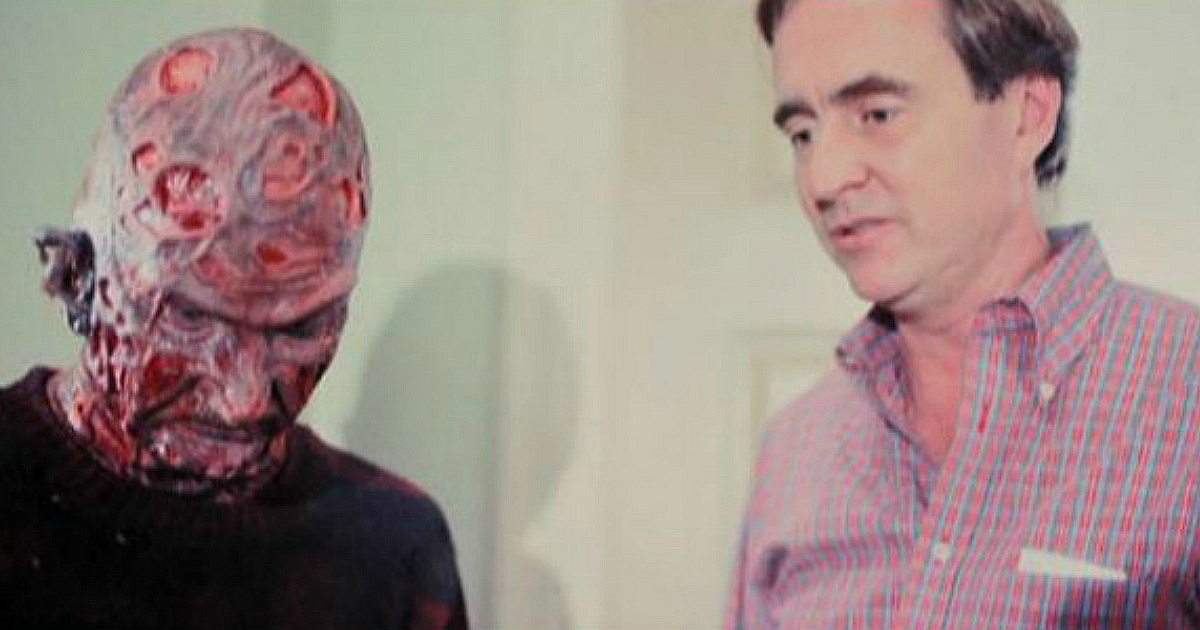 Usually when someone famous passes away, I write a little thing on Twitter and Facebook, giving a little insight as to why they meant something to me. Be it a film that connected with me, a song that helped me through something tough, a book that I devoured multiple times and a piece or artwork that I could look at until the end of time, always seeing something new. But when it comes to someone like Wes Craven passing away, it feels as if I’m in an awful nightmare and there’s no Dream Warriors to save me and Freddy Krueger isn’t the wisecracking asshole but instead just death himself.

Wes Craven was one of the first filmmakers that I connected with at a young age. Of course, Freddy Krueger was the 80’s and being a child of the 80’s, I connected with slasher movies. Yes, I was way too young but why were there kid’s costumes to look like Freddy, Jason Voorhees or Michael Myers? It’s something I pointed out as a kid, and the more Freddy became more popular than the movies themselves, I knew I had to watch these films. I believe the first one I viewed was the third film, which has the titular Dream Warriors in it. A horror superhero flavored film, I would watch that film anytime it would pop up on Channel 11 here in NYC (WPIX) and would secretly rent it from the video store across the street from where I grew up, Video Reflections.

Of course when I saw the third film, I knew I had to see the first two and whatever sequels came out after number 3. Seeing the first Nightmare on Elm Street was a bit of a revelation for me. Having seen Halloween, Friday the 13th and various other slasher movies, A Nightmare on Elm Street was something… more. Not to diminish the other films, but ANOES hit my child brain on a level I couldn’t even comprehend. Yes, Freddy was this fun killer who would make jokes and do some weird crap to people in their nightmares, but in the first, he was the ultimate boogeyman. A force of horrible nature who had one thing on his mind, and that was to kill the children of the parents who burned him to death for being a pedophile.

Dark stuff and I remember asking my parents questions about it and them not knowing how to truly answer them so they would just say, “Freddy is a bad man, so they had to kill him.” And of course my twisted mind makes me say, “Yes, but he thinks they are the bad guys, so what he is doing is right in his head.” He was the great villain, somehow sold his soul before he ever died and became a demon incarnate, and this all came from stories that Wes Craven had read. True stories about a young man who was afraid to go to sleep and would drink coffee nonstop and try to stay up. Finally, going to sleep, this young man died while he slept. A horror franchise was born from a real life nightmare.

Being a horror nerd at a young age, I had to see what films this guy who helped create Freddy Krueger did before, if anything. I went to the video store and asked the clerk, 8 or 9 years old, and asked what did Wes Craven make before Freddy? The guy looked at me and told me to come with him to the horror section. He walked me around and showed me a few films. Last House on the Left, he said, was his first film and really ‘fucked up’. He then showed me The Hills Have Eyes, saying, “Freaks kill people. Really violent.” My mind was racing, like I was about to rent these awful snuff films that weren’t intended for me. And then he showed me Swamp Thing. Wait, what?

I was a Swamp Thing comic book fan when I was young, loving the dark and twisted stories which I truly didn’t understand until 10 years after I first read them. Wes Craven made a movie based on Swamp Thing?! I had to rent all three films (at the time, I didn’t know he had also made a sequel to The Hills Have Eyes, Invitation to Hell or Deadly Blessing). Sadly, the clerk looked at my short stature and my hairless face which made him say, “I’m sorry. I can’t rent these films to you. I’d get fired.”

Foiled by my age. Oh you kiddies, you don’t know how good you have it now. But I was not going to let that get in the way of seeing his films. I just went home and bided my time. Which meant I waiting until that guy left and the more relaxed clerk would rent those films for me. And I fell in love with the darkness that Wes Craven depicted on screen. With his films Last House on the Left and The Hills Have Eyes, I saw a horror master who just kept trying new things and pushing the limits as much as he could.

When I found out he grew up in a fundamentalist religious household, it blew my mind. And that before he did his debut film, he was working in pornography, editing and writing, which is where he met another individual who wanted ‘more’ than where they were, Sean Cunningham (who went on to make Friday the 13th). It’s where Last House on the Left came about, where Cunningham told him they had to make a horror film, and Wes at first objected. But Cunningham pressed him and made a good point about his upbringing and how he should use it to his advantage. And he did, by doing a remake of The Virgin Spring, but twisting the knife even further into the audience’s spine.

I sat there, glued to the TV when the awfulness unfolded on the screen. The evil Krug (David Hess, who I became a big fan of after this film) became a villain that I just hated. He wasn’t Freddy Krueger. He wasn’t fun. He was despicable and didn’t hide that fact. The film would be perfect, if only they didn’t have those comedic scenes with the sheriff. I still get chills thinking about them. But then going into The Hills Have Eyes, we almost have a story about the other messed up family of inbred psychopaths, but this time in the desert, which somehow makes it that much creepier. A great film where we see people’s humanity stripped from them when they are forced to fight to the death, it’s a film that many have copied and not many have replicated.

And Swamp Thing is an effective comic book film, with a great costume and some fun stuff within, with Adrienne Barbeau and Ray Wise effectively making you care about this man who is now a plant based being. Of course it’s not as heady as the Alan Moore comic, but it’s at a time that the only good comic book movie was Superman, so I give it credit for being fun and having the basics of a hero. And it showed me that Craven was more than just a horror filmmaker.

Throughout the years, I would check out more of his films to varying degrees of quality: Deadly Friend (I love that messed up movie), Deadly Blessing (evil Amish = scary?), Shocker (a Freddy clone that I enjoy but is in no way a good film) but two films in particular that I saw at different times at friend’s houses really took a toll on my psyche. The Serpent and the Rainbow was a film I didn’t appreciate at the time, like John Carpenter’s Prince of Darkness (a film I now adore) but it still creeped me out because it wasn’t a zombie film I could ever imagine. The other film was The People Under the Stairs, a film that this day still has a hold on me.

I remember seeing The People Under the Stairs at a friend’s birthday party, and for some reason that was the film he chose for all of us to see. It was also the first party that had girls over, so I was roughly 12/13 years old. And this film seriously creeped me out, to the point that I couldn’t concentrate on the girls there at all, instead trying not to freak out with the film. I’m not sure why it did something to me, but to this day whenever I’m at someone’s house, I knock on the walls and hope that nobody knocks back.

Of course thenI think of two films of his from the 90’s that I actually got to see in theaters, that made me fall more in love with his filmography. His return to Freddy Krueger after so many years, New Nightmare, was a return to form in making Freddy creepy again, and it’s a film that I love to this day, always pushing the film on people who gave up on the franchise, especially after the abysmal Freddy’s Dead. The second film was the film that brought back the slasher flick in full force, the Kevin Williamson penned Scream, which is a product of its time, yet still works today, mainly because of the tongue in cheek, winking at the camera (that sadly became too played out, even in the Scream sequels as well). I had to have seen Scream in theaters 5 to 6 times, because I just loved the pacing of it and kept finding people who hadn’t seen it yet. It was one of the films that actually made me want to make horror films.

Of course I’m missing a ton of his films, such as the underrated thriller Red Eye, the non-horror film passion project Music of the Heart, Vampire in Brooklyn which is the one film I remember completely disliking that he made, the very lopsided Cursed which I have a special place in my heart and the Scream sequels (number 4 being my second favorite, which is weird to most). I think I will finally track down a copy of Invitation to Hell and his last film, My Soul to Take, which I heard is not that good. But because I’m a Wes Craven fan, I owe it to him to judge the film on the film itself.

This isn’t a goodbye. Instead, it’s more like I’ll see you in my nightmares.

“You learn a lot more from those bumps than from when things are going great.” – Wes Craven