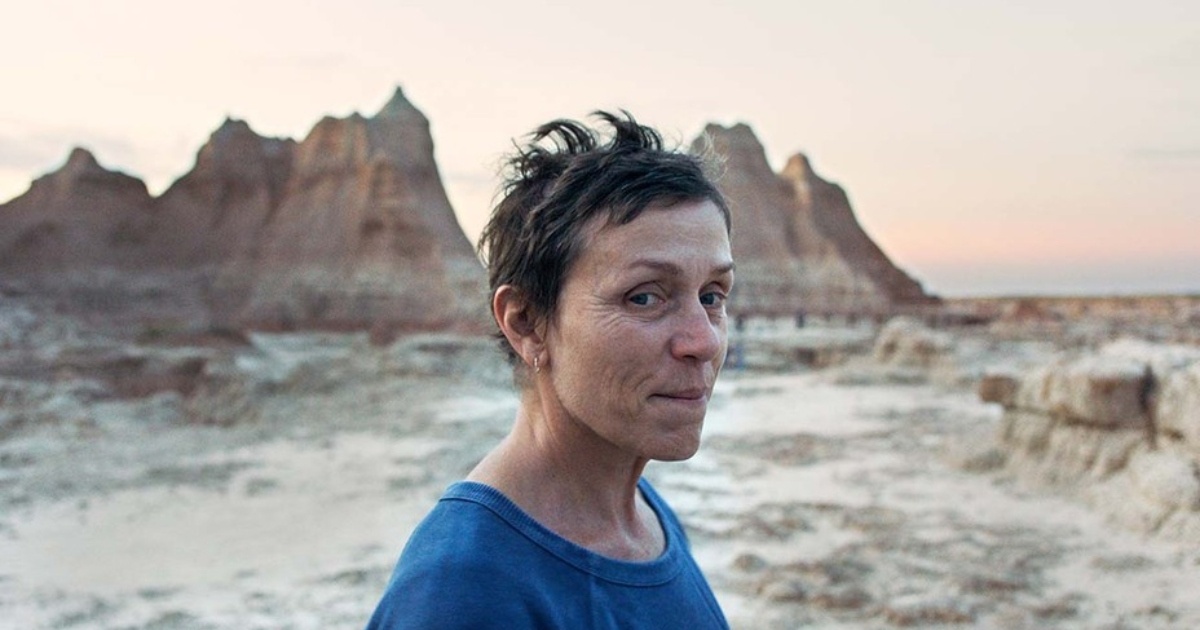 This is the response Fern (Frances McDormand) has to a question asked by the daughter of what appears to be a family friend, and in its own way stands as the larger thesis of Chloe Zhao’s latest film, Nomadland.

Based on the non-fiction book Nomadland: Surviving America in the Twenty-First Century by Jessica Bruder, Zhao’s film introduces viewers to McDormand’s Fern, a widowed woman in her 60s living in Nevada who, after the collapse of her small mining town and death of her husband, lives in her white van hopping from job to job. More or less structured around seasonal changes from one “holiday season” to another and the Amazon factory Fern calls home during those hectic weeks.

A film focusing much of its time and mental energy on the lives Fern comes in contact with on her journey, Nomadland is a film very much about just that. Drawing inspiration less from the literalities of Bruder’s book than the humane tenderness it showed throughout its narrative, Zhao’s film is heart-breakingly textured and nuanced. From the very opening, Fern taking things out of a storage locker, hints at the film’s transitory narrative while her gut-wrenchingly felt touch of her late husband’s clothes hints at a film that never comes out and says its themes, instead embodying them in the characterization.

This is a film very much about human connection and isolation. Fern’s late husband is a topic of conversation throughout the film, playing as both the loss of a partner and also the loss of a life constructed. Pair that with the collapse of the town she lived in, and it feels like the earth may have splintered right under Fern’s feet. This is never stated outright, instead Zhao’s painterly camera catching the briefest moments of humanity with an almost verite documentary style. Lazily compared to Terrence Malick, the film never once leans into parody, instead capturing the vistas Fern travels with an almost Western-like appreciation and love.

And in turn, Nomadland becomes something of a formalist exercise as well. Riffing on Western iconography (even down to a Searchers-like shot with Fern framed walking out of a doorway), Zhao’s direction is biting, finding the filmmaker crafting a film about the decomposition of the American capitalist structure as seen by nomads in the American west using visual language influenced by that of a genre which spent much of its infancy glorifying that same machine. A director of neo-Westerns in her own right (specifically The Rider although Songs My Brother Taught Me in its own way plays with similar language), Zhao’s latest is a humanist, but incredibly sharp and pointed deconstruction of a dying American workforce, a blue-collar community being snuffed out by greed.

It’s also a towering achievement for its lead actress. McDormand is in rare form here, using her sharp wit and ceaseless self-confidence to craft a character that feels entirely sure of herself and yet never quite able to put roots down. The closest she gets to this is after meeting Dave (David Strathairn) a handsome older gentleman who becomes the closest thing Fern comes to finding a possible center throughout the film. Their relationship feels rightly textured, and again, this sees writer/director (and editor) Zhao crafting an incredibly nuanced and layered relationship through slight touches and glances, never literalizing how either feel directly. However, the real star of the film is Swankie, a companion of Fern’s played by a non-professional actor of the same name, and in her own way the closest thing to family had by Fern throughout the film. Her energy is palpable, opening up Fern in a way that feels real and lived in. Swankie’s freedom and peacefulness with regards to her decision to live a nomadic life despite a life threatening sickness unlocks something in Fern, and subsequently the film itself, giving real credence to the idea that Fern truly isn’t homeless. She just may not have a house. Home is with those you love, no matter where they may be.

This film is every bit as incredible as the awards and great notices it has earned so far on its festival run may have one believe. Zhao’s latest is a genuine masterpiece, a deeply humanist look at the ramifications of a capitalist structure rotting from the inside. The fall of American excellence in the body of a genre that mythologized its infancy. Truly one of a kind.