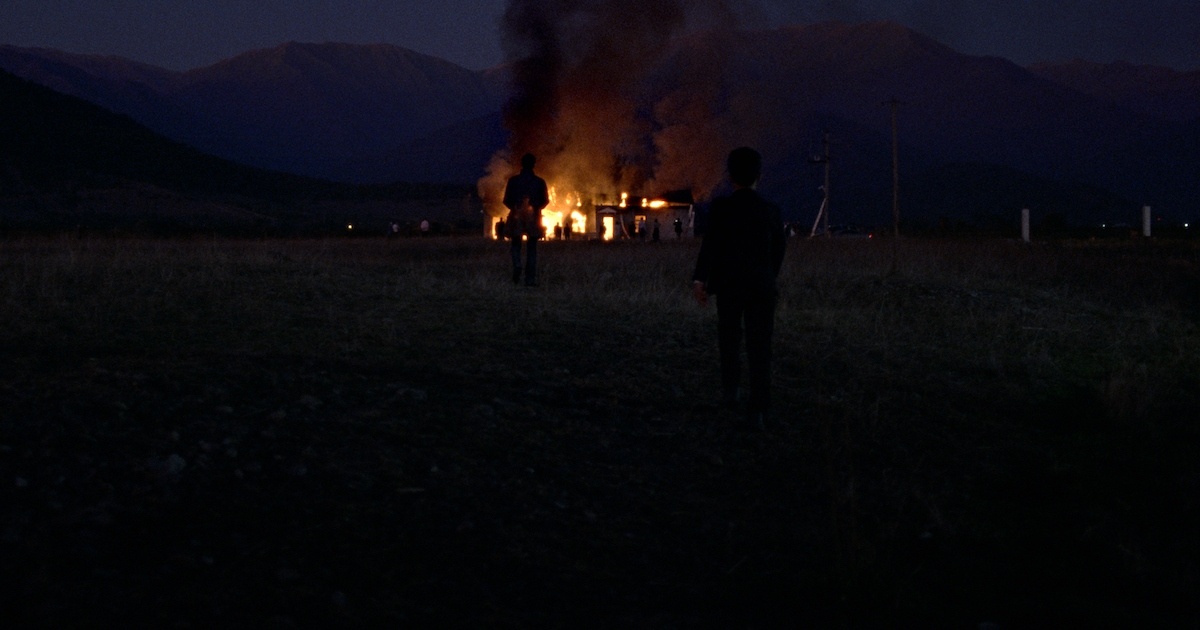 There are debut features and then there are films like Beginning. The first feature film from director Dea Kulumbegashvili, Beginning is a full throated announcement, on a global stage, of a new and deeply important voice in world cinema.

The film introduces viewers to Yana, the wife of a leader in a Jehovahs Witness community in Georgia. From its incredible opening shot, however, the film subverts any and all expectations. Opening on a shot of a congregation meeting within a house of worship, the sequence culminates with an act of heinous violence that permanently changes ones expectations, moving expectations from that of a relatively simple story of faith found in a small community to that of an almost breathless escape of its lead from a society seemingly bent on destroying her.

Shot in an almost assaultive 1:33 aspect ratio, Beginning is a beguiling work of craft and storytelling. Using almost exclusively a static camera fixed for long, ever-evolving takes, Kulumbegashvili’s debut is an auspicious one to be sure. Executive producer Carlos Reygadas is clearly an influence on the filmmaker, particularly in her blunt portrayal of violence as it happens onto her characters. Manifested in the opening scene, the culminating flames come across less like a planned attack by a Christian extremist group than it does a sudden strike from something far more metaphysical. However, what makes this debut truly special from a craft standpoint is less its clear influences like Reygadas or Chantal Akerman, than how Kulumbegashvili uses these influences in entirely singular ways. There are striking images here that are deceptively simple (the film’s centerpiece, that of the lead laying peacefully on the ground, for example) yet hint at a quiet interiority that glances more towards experimental video art more than anything classically narrative.

And despite the core of the film revolving around a brutal, sexually violent act of abuse done to Yana, the story isn’t entirely brutalist either. Or at least not in a manipulative way. Instead, Kulumbegashvili pairs these acts of devastating violence against backdrops that are almost surreal in their beauty. Even the central act of violence mentioned above. This sequence is shot in a static, matter of fact manner, that, while being at a distance, is almost unwatchable. There’s not a flinch to be seen, and yet, it’s impossible to turn away from. Kulumbegashvili’s frame is so austere and beautifully composed that, paired with the sudden nature of the attack, the violence almost doesn’t even register for a beat.

It also helps that the central performance is beyond description. Ia Sukhitashvili stars as Yana, in what is one of the year’s great lead performances. Modulating between completely self aware and defiantely obtuse, Skhitashvili’s performance is thrillingly textured and lived in, allowing her pain to manifest in various ways both literal and figurative. Kulumbegashvili gives her enough room directorially to breathe, allowing her performance to shift from resolute to grief-stricken with the slightest of glances or gestures. Arseni Khachaturan’s photography also goes along way here, particularly as the film begins to dive deeper and deeper into her interior life as a woman willing to do anything for some semblance of freedom. In this beautiful stillness a life of exasperated resignation grows, and so does a brooding, breathtaking rumination on oppression where what’s just out of one’s line of sight is even more dangerous than the world they see clearly. A debut unlike any we’ve seen in quite some time.