If they’re not already aware of the film, fans of high-end, family-friendly and intelligent feature length anime should avail themselves of the opportunity to see A Letter To Momo if they should be so fortunate to find it playing anywhere nearby. After debuting at the 2011 Toronto International Film Festival, it’s been making its way through various festival circuits ever since, along with a Japanese theatrical run last year. As of this writing, it only has one more showing at the 2013 Portland International Film Festival (details below), so I’m  doing a bit of a rush job in order to get my review and recommendation out there in time to help boost attendance! 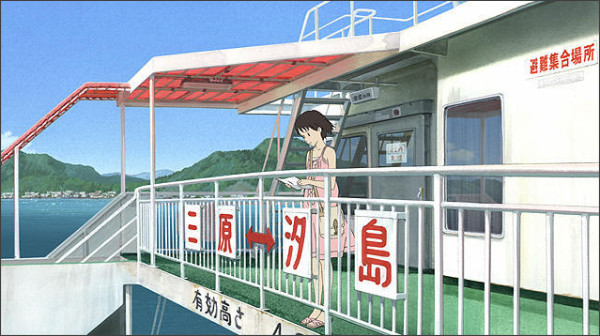 A Letter To Momo derives its title from a central plot device, a note that was begun, but never finished, by a young girl’s father just before he was unexpectedly killed in an accident. Naturally, his tragic passing disrupts her life, and the pain of her loss is compounded by her guilt over the fact that the last conversation she had with her dad was an argument in which she vented some angry thoughts triggered by disappointment that he didn’t have time to follow through on some plans she had made with him. After his funeral, while going through his belongings, Momo finds the notepad that has just to the words “Dear Momo” written across the top. She can only wonder, and eventually obsess, over what it was he had to say to her, but of course, that question remains unanswerable, at least in conventional terms. After relocating to a new home on an island in Japan’s Inland Sea, Momo struggles with her role as a new kid in the community, still traumatized by the shock and unwelcome changes. Her plight is intensified as she gradually discovers that her new home is haunted by three ghostly spirit beings that only she can perceive directly (though others occasionally vaguely sense their presence, without recognizing their mischievous intelligence!) Though understandably freaked out by their bizarre appearance and behavior, Momo establishes herself as their equal and even has them come to her assistance when circumstances require her to be strong and courageous in confronting the storms and confusions of her life. 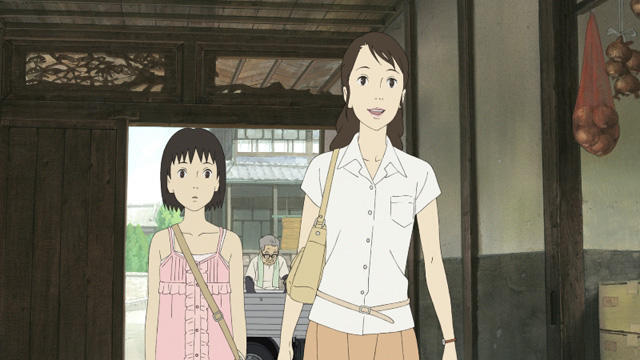 Unlike the Hiyao Miyazaki/Studio Ghibli titles that have achieved significant mainstream success here in the US through their distribution (and star-studded English dubbing) deal with Disney, A Letter To Momo‘s eventual availability for broader theatrical or convenient home video distribution for English-speaking audiences isn’t quite clear. It would be a shame if this engaging and meticulously animated gem didn’t receive something approaching the level of attention that Miyazaki’s indisputable masterpiece Spirited Away earned several years ago. Both films land in similar territory: affecting, bittersweet tales of a young girl coming to grips with serious loss in her life and the subsequent feelings of displacement and youthful confusion. 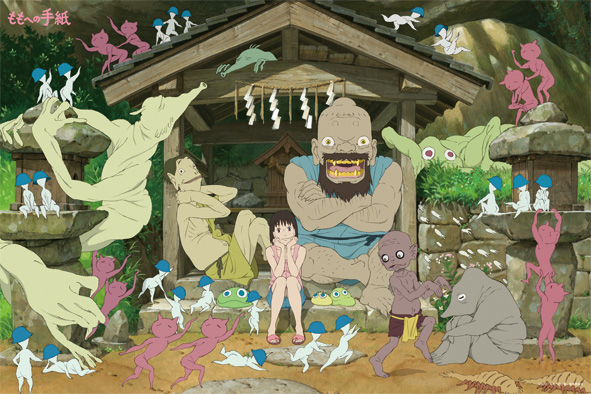 Their journeys to self-discovery and a renewed sense of confidence in both stories are abetted by the chaotically intrusive but ultimately clarifying input of various mythical, supernatural characters, injecting notes of wonder and fantasy that engage the imagination of children and adults alike. While it may be the case that avid consumers of anime could find the storyline of A Letter To Momo somewhat formulaic or derivative, I found it different enough from the standard Miyazaki plot. Rather than transporting the viewer to a strange-but-wonderful “Ghibli-esque” realm of fantasy where all the usual rules are thrown out the window, A Letter To Momo stays relatively reality-based throughout, with the supernatural elements occasionally breaking into Momo’s world. This subtle reversal preserves the possibility of a more rationalistic adult interpretation of Momo’s experience as indicative of a child’s imaginative/adaptive coping process as she grieves for her deceased father, settles into a new and radically different community than the one she grew up in and adjusts to changes in her mother’s personality and priorities as they establish a new life together. 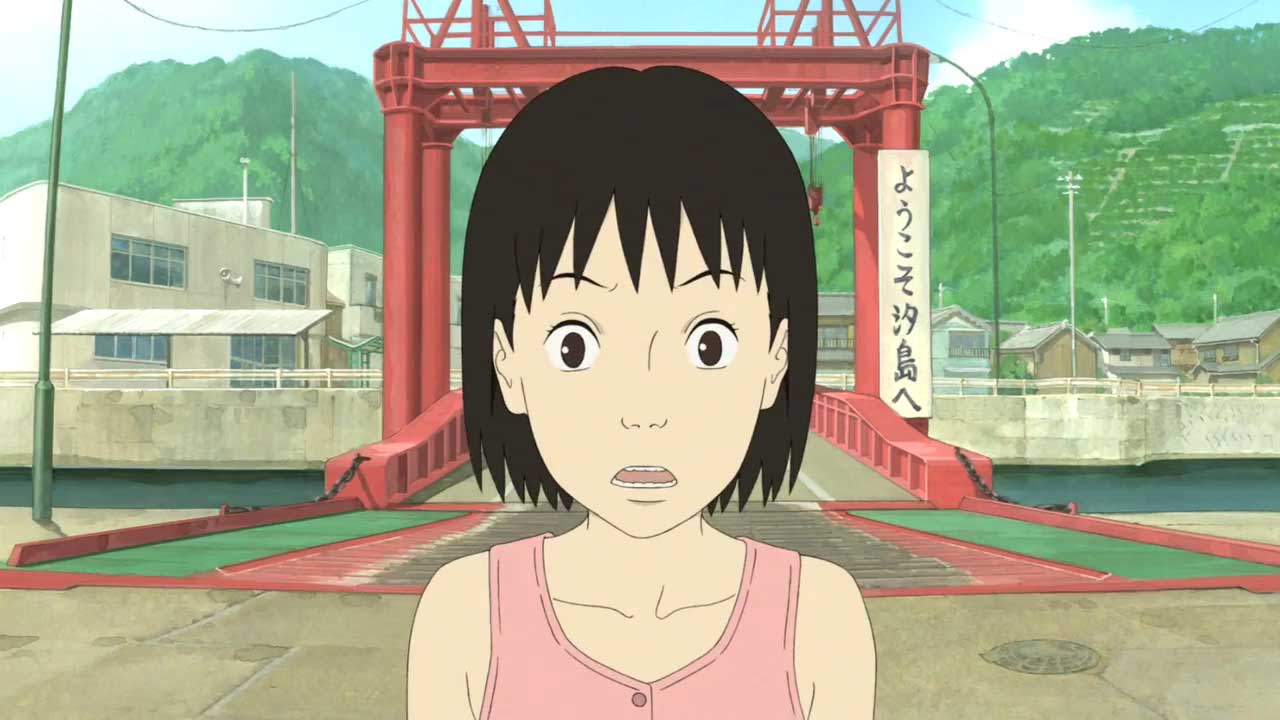 While I’m not an avid viewer of anime in general (I usually watch these films at the behest of friends or family, rather than pursue them on my own initiative), I’m almost always appreciative of the creative talent and impressive nuance that goes into their creation. A Letter To Momo offers some of the most beautifully detailed and realistic Japanese landscapes and architecture that I’ve seen in an animated feature, and a remarkably true-to-life attention to the small details of facial expression and body language that give the film true cinematic merit. I watched the film this afternoon with my daughter Lys, who more than anyone else in my life has steered my attention in the direction of these films. As she observed (and enjoyed on its own terms) the atmosphere is quite different than the more stylized and exaggerated TV show animation that might first come to mind when “anime” is invoked. While her preference in general is for the more extended format of series-based anime, and the deeper exploration and development of characters that a longer runtime obviously allows, my tastes run in the other direction; I prefer the compactness and more immediate impact of a feature length film, since I tend to be a bit more of a hurry to get to the point. 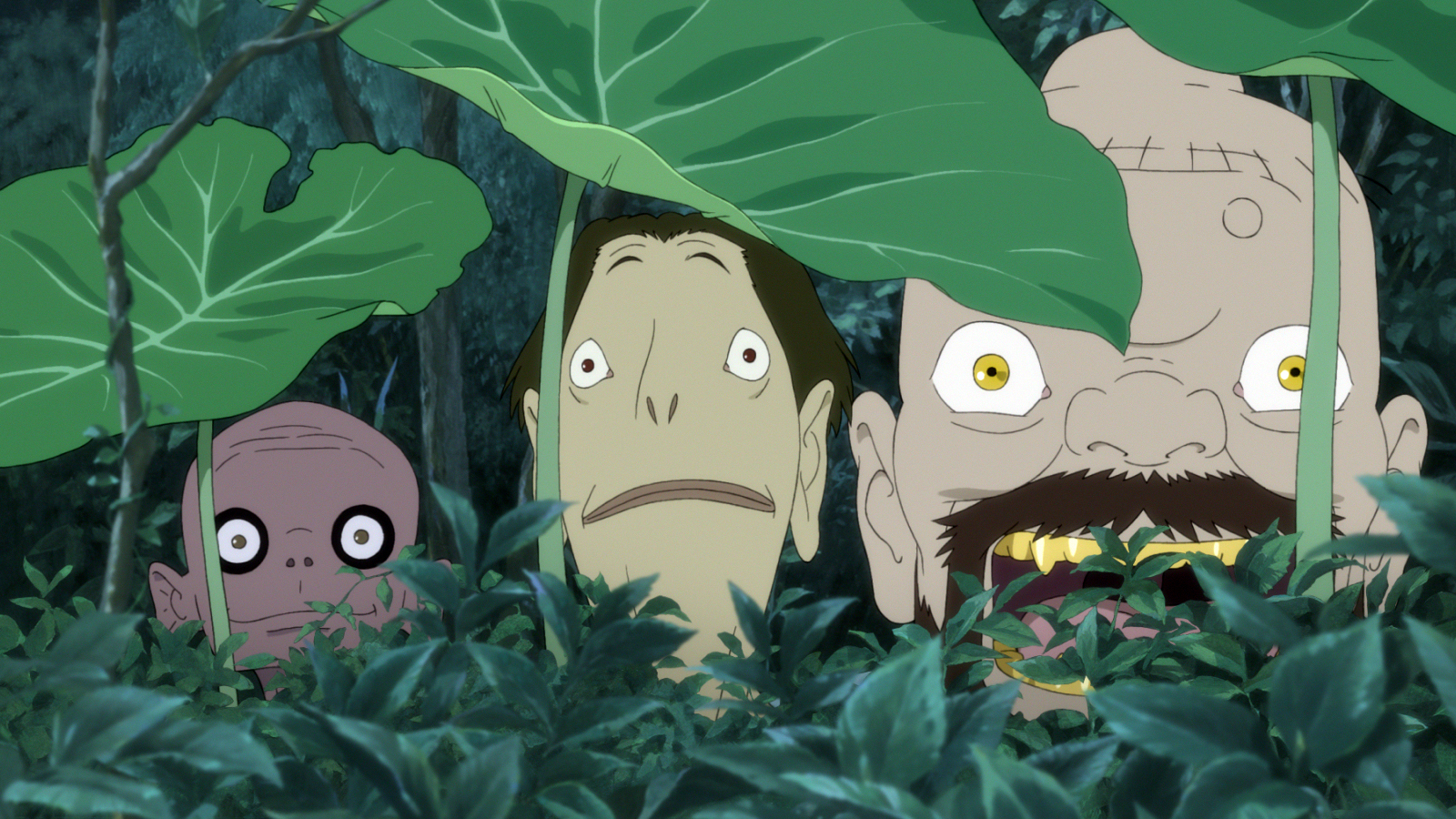 In any case, the portrayal of Momo and key supporting characters easily drew me in and made me care, and the gorgeous visual compositions, involving seasonal and other atmospheric changes throughout, were consistently splendid. And I say this despite the handicap of watching a screener disc in which a fair portion of the upper screen was blocked with the word SAMPLE and a clock counter keeping the time, all presumably to serve as an anti-counterfeiting and bootlegging measure. I can understand that the anime community has more fans likely to abuse the privilege of viewing these advance copies of the film; in any case, I won’t allow that distraction to diminish my endorsement of the film!

PIFF 36 Link: A Letter To Momo will be shown at the Regal Lloyd Center 4 on Tuesday, Feb. 12 (6 p.m.) Details and more information on the film can be found here.