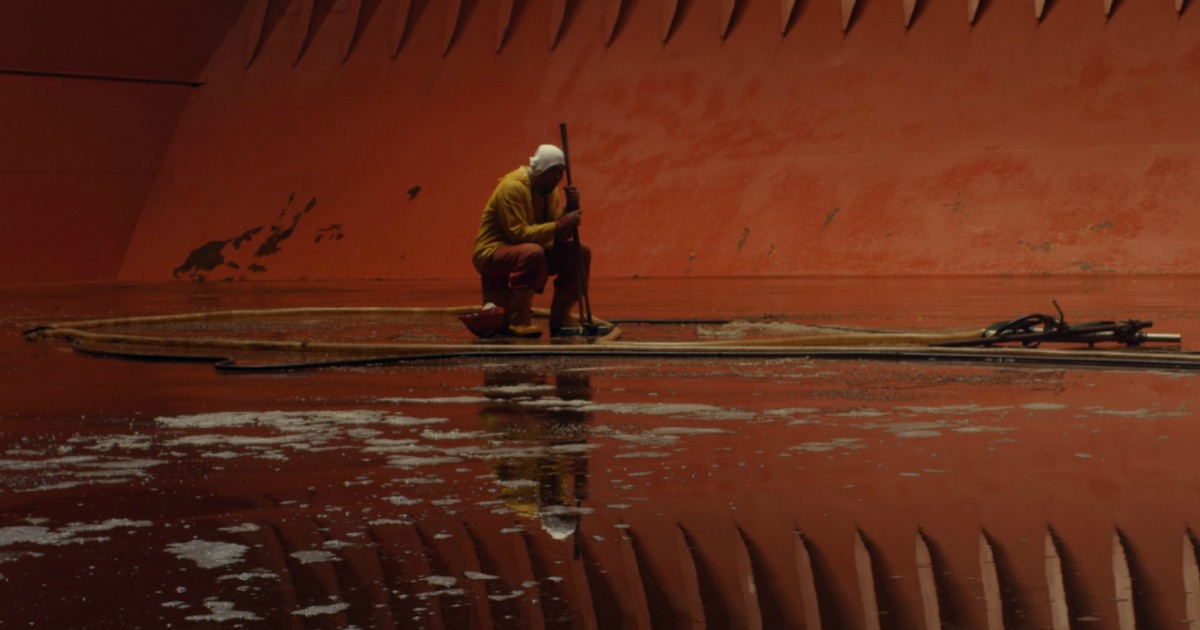 One of the superlative aspects of each and every Portland International Film Festival, is this festival’s ability to find and guts in booking the most avant-garde film films/film makers. Be it documentaries like the masterful debut of Eduardo Williams in The Human Surge or the latest fiction work from established capital A artists like Albert Serra in The Death of Louis XIV, PIFF collects and curates films that consistently attempt to push boundaries in both content and form.

That’s partly why it’s hard to describe the genuine shock one has when sitting through the bewilderingly challenging documentary Dead Slow Ahead.

Dead Slow Ahead is a rare type of debut. A first film that feels entirely of one singular and fully formed voice, first time feature filmmaker Maruo Herce introduces himself as one to keep a keen eye on. A direct extension of the “slow cinema” movement, Dead Slow Ahead tells the story, if you can really call it that, of not so much people but the shipping freighter that they call home. Set on the journey of this said freighter across the Atlantic Ocean, Herce’s documentary finds little interest in the facts within the lives of each of these crew members, but far more their existence as cogs in an ever-grinding machine. Ostensibly a dialogue-free feature, Herce’s film is a whisper of a documentary, experiential in ways that transcend simple non-fiction filmmaking.

Owing as much to new-science-fiction filmmaking as anything resembling documentary, Dead Slow Ahead has the pace of a Tarkovsky-like science-fiction drama, turning each of the machines interacted with daily into something resembling that from a dystopian future just ahead in our own timeline. Told in static shots that can last for minutes, the film has a droning quality, and not just in its ambient noise that evolves into something not far out of the realm of the modern experimental music scene.

Entirely about isolation and the disinterest in human vitality carried under the surface of modern economies, the desolate setting becomes something more like an Alien film than a documentary, flowing even into the framing of each shot. Again, told in static sequences, each frame is at a detach, leaving the viewer at arm’s length through each cold and emotionless shot. The film carries with it an almost horror-like atmosphere, with the disinterested vessel almost seeming to have a life of its own. With the comically ironic name The Fair Lady, the ship we call a home for the film’s 70-ish minute runtime feels as though it has a mind of its own, and Herce dissects the tension between the needs of the capitalism propelling this ship and the lives who can be forever changed at its own whim.