Much as the war film is more popularly a mode for depicting heroism against all odds, the nobility of one man to join the ranks of the many, and the value of sacrifice, so too has the genre been flooded with meditations on the very idea of war, and the poisonous effect it has not only on the bodies of those who come into contact with it, but on their their very souls. By stripping itself of any debt to realism, and letting philosophy dictate the physical (rather than the other way around), White Tiger is among the most overtly ponderous war films I’ve ever seen, while remaining totally dedicated to the brutality it questions.

World War II is drawing to a close, and although Russians are winning their struggle against the Nazis, their forces continually come into conflict with a mysterious tank they’ve dubbed the White Tiger that suddenly appears behind their lines and decimates their forces. The Russians decide to develop a tank of their own that they believe can defeat the White Tiger, captained by a man with a more-than-personal connection to this effort – a tank crewman whose last encounter with the beast left over 90% of his body burned, but who came back from near-death, fully healed as though he’d never been touched, and with the ability to commune with tanks. 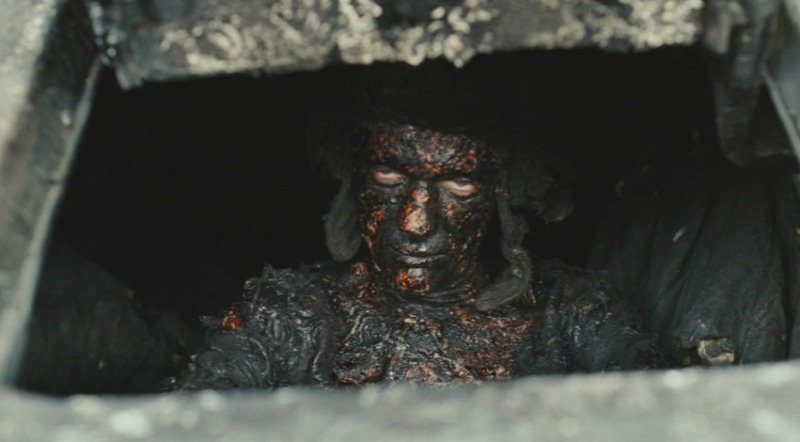 No need to read that again; yes, he talks to tanks. And the more he, and his commanding office, come into contact with the White Tiger, the less they believe it to be something manmade. This is, to say the least, not your typical war film, nor even a typical film film, as it takes on a lot of the tropes of the horror genre (right down to its splashy title screen) without actually being in any way a horror film, psychologically speaking. It actually uses those tropes to further its philosophies, chiefly boiling down to the idea that if we fight in wars long enough, sooner or later human beings will evolve into pure machines of war, and our weapons will become one with us, or perhaps vice versa. This begs all sorts of questions, but most immediately it would literalize the violent tendencies many bring back from the battlefront, and there’s probably a whole other movie to be made about the postwar environment for men like the tank driver that White Tiger only hints at, as we see him standing amidst a field of wrecked tanks.

That, amidst the ponderous examinations of how much of oneself someone sacrifices in war, co-writer/director Shakhnazarov (working with Alexander Borodyansky from a novel by Ilya Boyashov) still crafts a very viscerally commanding piece of cinema is beyond noteworthy. Though, as a writer, he hits his themes a little too hard in the dialogue, and explicates the mysteries at hand, his camera is constantly asking what remains undiscovered, unsaid, unquestioned. There’s no attempt to totally account for the state of the world, very much to the film’s credit. The battle scenes are very well-wrought, not trying to make tank battles any more dynamic than they are, but letting the space between the shots fired build suspense.

White Tiger currently has no distributor in the United States, but should it come your way, make it a priority.