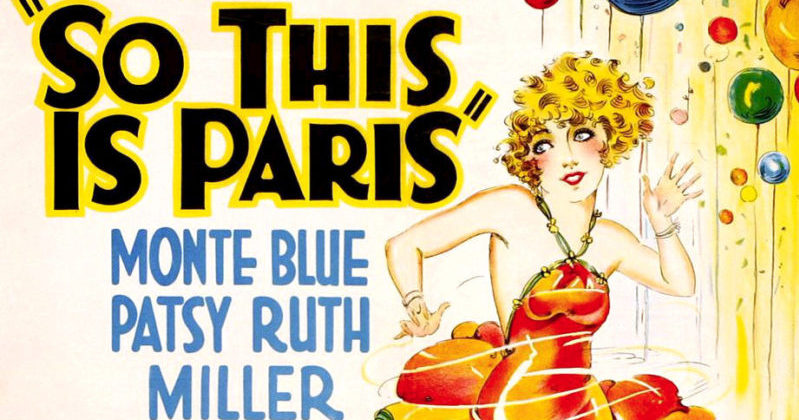 This is my seventh TCM Classic Film Festival. At a certain point, some things become routine – one learns to expect the exhaustion at the dawn of day three (of four), the constant negotiation between personal viewing whims and rare presentations, the way plots and aesthetic choices start to run together, and the suspicion that explaining the draw of such an event to those not immediately inclined to attend it may come across a touch insane. Film festivals are innately demanding experiences, but between the pleasure of its programming, the consolidation of the venues, and the brevity of most of its films’ running times, few make it so easy to watch four, five, six movies in a day. You tell your coworkers on Monday what you did all weekend, and it starts to not make a lot of sense. But somehow, in the midst of it all, the point of it couldn’t be clearer.

The notion of pleasure was doubly heightened this year with the focus on comedy. “Make ‘Em Laugh: Comedy in the Movies” was the loose theme this year. And while I’m temperamentally more drawn to dramatic films (which TCM certainly provided), there was a lot to laugh about this year.

After being a bit underwhelmed with the original film adaptation of The Secret Life of Walter Mitty, I wasn’t particularly eager to haul up Highland Ave. at 8:30 in the morning for star Danny Kaye’s most famous film, The Court Jester. With my wise fiancée leading the charge, however, in we piled for the world premiere of its new restoration at the TCL Chinese Theatre, and glad I am that we did. It’s worth echoing what Fred Willard noted in his introduction to the film, that it’s hard to imagine anyone else would quite have the chops to pull off not only the comedic timing, but also the sweetness and sincerity in this story about a freedom fighter in medieval England who disguises himself as the King’s new jester in an effort to overthrow the crown. There are songs and comedy routines galore, but it is surprisingly heavy on plot (far from the breezy experience one might want at 9am), and looks absolutely gorgeous in the new restoration.

I have sort of limited patience for stories like Game of Thrones that take the culture of kings and queens utterly seriously, but bereft of much poetry in their telling. Grim and gritty will only get you so far in life, kids. The absurd gravity of the times is best left to Walerian Borowczyk (Blanche), Pier Paolo Pasolini (Oedipus Rex, The Canterbury Tales), or Eric Rohmer (Perceval le Gallois), but between the extremes grim and silly, I’ll take silly every time, and silly The Court Jester is. By the time an already-funny scene is compounded by the random magnetization of a suit of armor, the possibilities seem almost limitless, and the climax proves them indeed to be. A hypnotism subplot allows Kaye to play quite a few different angles on a familiar sort of cowardly character, but his earnest desire to be brave separates him from the accidentally-heroic characters thrown haphazardly into greatness we see so often in films starring Bob Hope, Jerry Lewis, or Woody Allen. And the songs are aces, too. The restoration doesn’t currently appear to be scheduled to hit Blu-ray, but I doubt that’s far off.

Silliness is almost reflexive in Ernst Lubitsch, even as his characters attempt to retain composure, which we see in full display in his great 1926 silent film So This is Paris. I saw this film (still sadly unavailable on DVD or Blu) about a year ago at Cinefamily through their great Silent Treatment series, and was extremely eager to see it again. The two distinct venues proved edifying. The former is a self-selecting crowd – they tend to turn out to most of the Silent Treatment shows, and for some, it’s the only trips to Cinefamily they’ll make. They’re extremely attuned to the nuances of silent screen storytelling, necessary to pick up on the boundless humor of gesture and glance a director as sophisticated as Lubitsch imbued in his films. Very little of the story is told in intertitles, but one can pick up on the dialogue nevertheless. That said, TCM as a channel and certainly as a festival, while spotlighting silent films regularly, does not necessarily engender the same crowd (and this is totally fine; the Fairfax set isn’t nearly as sensitive to melodrama as the TCM audience, for example).

The laughter was less explosive and less frequent this time around, but the musical accompaniment was more robust. Donald Sosin’s largely improvised – but precisely-timed – piano accompaniment perfectly complemented the film’s bawdiness. Especially by the time the film – about a pair of husbands and wives who might want to see the loving arrangements revisited – gets to the outstanding ballroom sequence, when Lubitsch piles his dissolves and pans and kaleidoscopic effects into an orgy of limbs, champagne, and streamers, it can be a lot to keep up with, and Sosin’s score made it as beautiful as I could imagine. And even silently, Monte Blue’s performance as the nervously duplicitous Doctor Paul Giraud seemed an important forerunner to Maurice Chevalier’s work under Lubitsch, particularly in One Hour With You (also screened at the festival).

One can arguably take silliness too far, and the decidedly mixed crowd reaction to Those Redheads From Seattle suggests at least one film this week did just that. Now, I’ll admit, you wouldn’t necessarily expect a film about Agnes Moorehead and her similarly-folicled daughters (plus their cat, President McKinley) traveling to the Yukon at the height of the Gold Rush, only to discover her husband has been murdered in a newspaper war, to also be a 3D musical, let alone for this all to cohere in a sensible way. That said, by the time the film cuts from Moorehead screaming in despair upon learning of her husband’s fate to its most joyous musical number, one suspects that director Lewis R. Foster, his screenwriters, and producers might have made a few more sensible choices along the way.

But I found it hard to really feel too sour towards the film. This is, admittedly, in part because the musical is my favorite film genre and I quite enjoy 3D, but the songs are really quite a lot of fun and the added dimension is actually used pretty smartly. You still get a few things thrown at the camera (including a leaky beer barrel), thankfully, but an early dogsledding sequence shows they have a bit more up their sleeve. It’s not merely a matter of that “depth” and “space” you heard so much about from 3D enthusiasts circa 2007-2012. It’s just flat-out more thrilling to watch the sleds move across the screen and down a mountain and past the camera, and seemingly zooming right towards you the whole time. One gets the sense of the wind in one’s hair and the ardour of the journey and the rush of excitement towards a new place. It doesn’t mean the plot’s less messy, but I’m glad TCM and the 3-D Film Archive dug this one up and restored it so well. It will be released on Blu-ray in a month.

As for taking silliness too far, however, or perhaps not far enough, I will say briefly here that due to being Pre-Code airplane comedy Cock of the Air reaching capacity before my arrival, I ended up catching the first hour of Frank Capra’s widely-loved black comedy Arsenic and Old Lace, which I found as uninteresting now as I did when I last saw it seven or eight years ago. Cary Grant (the greatest screen actor there ever was) hated his work in the film, feeling indeed that he went overboard in his performance. It is just about the wackiest I’ve seen him outside of a Hawks picture, but at least he and costar Priscilla Lane have some chemistry and are able to invent bits of business that aren’t directly the point of their being there. Just about everybody else in the film seems to be under overly-strict direction, never a good feeling to evoke in a comedy as odd as this. As a result, I can scarcely think of another film that works as hard as this does to be merely mildly amusing. Outside of maybe Preston Sturges, but that’s a subject for another time. I’ll be back soon to talk noir, psychiatry, and economics. Hey, that can’t all be laughers.