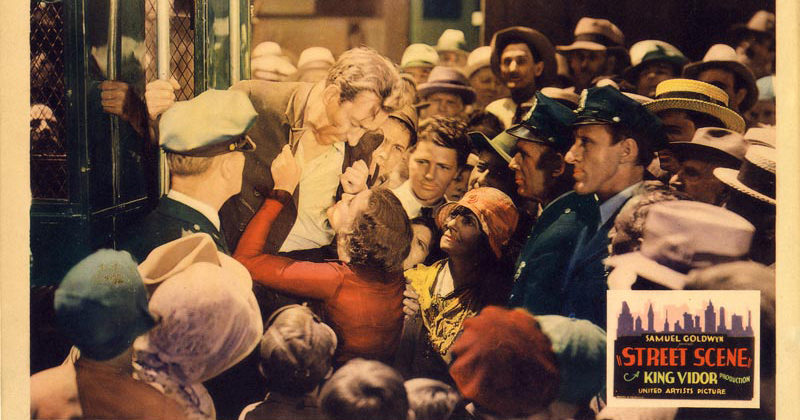 The 1930s – more films about women, more films about working life. And often the two overlapped. You watch a film made today, it’s brutally clear that the people who made it rarely have to be anywhere In the ‘30s, at the height of the studio system, the entire creative force behind a picture worked 9-5 on the studio lot, just like anyone else. They had a workplace. And while many made a great deal more money than the characters they were depicting, they knew what it was to hold a job. That mindset, that constant awareness of money and office work and routine, bleeds into the pictures of the period.

Take a film like Rafter Romance, which played at TCM Classic Film Festival Friday morning. Ginger Rogers and Norman Foster star as two broke strangers living in the same apartment building (and they say people knew their neighbors back then). Mary works by day cold-calling from a list to sell refrigerators; Jack works as a night watchman. Neither brings in enough to make ends meet, so their landlord decides to room them together. She’s out all day, and gets the apartment from 8pm to 8am, when he comes in. And you’ll surely guess where it goes from there.

Getting to the romance by way of a reversal of the famous Shop Around the Corner formula – here they meet and get along in real life, but detest one another through notes around the apartment – the film deals very pleasantly with the struggles of budding romance when there isn’t a lot of money to go around. They’re stuck mostly meeting in parks and cheap restaurants, taking in massive construction as a source of entertainment. Their only true day of leisure comes at a company picnic, where even then they have to avoid the main crowd because Mary’s boss has taken an elevated liking to her. She has her tricks for dodging his advances, but they’ll only hold out so long.

More than any sly commentary on capitalism, Rafter Romance is an example of a very common sort of film of the day. It’s 72 minutes, thoroughly predictable, but consistently funny and winning. It’s content with having its characters be petty or selfish or proud without making their flaws the center of the film. They’re just ordinary people, getting along in life. The film boasts a small but rich supporting cast – including George Sidney as the landlord, Robert Benchley as Mary’s boss, and Laura Hope Crews as Jack’s would-be patron – but it’s Foster and especially Rogers who capture our attention. Foster had a strange sort of career, acting steadily through the 1930s before turning to a steady career in directing (where his credits included the excellent film noir Woman on the Run). Rogers would of course become one of the biggest stars in the country – the same year Rafter Romance was released, she also stole the show in 42nd Street and Gold Diggers of 1933, and made her first appearance with Fred Astaire in Flying Down to Rio. The rest, as they say, is history, but Rafter Romance gives her one of her first real starring roles, immediately proving she can more than ably carry a picture. She’d been looking to get into more dramatic work at this time, but this film only cements what a skilled comedian she was.

Before the film, Leonard Maltin interviewed a couple members of the TCM staff about the unusual reason Rafter Romance went largely unseen for so long. Apparently Merian C. Cooper, the head of RKO in its time, received as part of his severance package the rights to four films of his choosing, this among them. He mostly wanted the picture for remake rights, and ended up selling off the elements in a shady tax deal that brought him little relief. So with the elements being held by one party, and the rights to show the film by another, neither particularly willing to get along and both eventually dead, it became a more tangled mess than it was worth until TCM came along in 2006 to try to sort it all out. They debuted it on the network the following year, and released a DVD shortly thereafter, only to let that fall out of print. Now the film is sadly returned to the rarified status it “enjoyed” for so long.

Far more available, though not much more famous, King Vidor’s 1931 film Street Scene was the best film I saw for the first time this past weekend. I don’t know what it’s going to take to get me on a more committed effort to see more of Vidor’s work from this period, considering he tends to steal the festival (past programming has included The Big Parade and The Stranger’s Return), but this only confirmed that I’m spending my non-TCM-Fest time all wrong. Written by Elmer Rice and based on his own play, the film takes place entirely on the front stoop of a large New York apartment building on a very hot summer day. Tensions are running high and the residents are wandering the streets, looking for a bit of breeze to relieve them. They pass the time by talking about the weather or gossipping about whoever isn’t there or yelling about the injustice of capitalism.

The film has one of the biggest cast cards I’ve seen in this era, but it principally concerns the Maurant family. Frank (David Landau) treats his wife Anna (Estelle Taylor) horribly, and consequently she’s started taking up with an office man for the milk company (Russell Hopton), who keeps finding occasion to pass by their building. Frank and Anna’s daughter Rose (Sylvia Sidney) is out of school and working for a real estate office, where her married boss (Walter Miller) won’t leave her alone, though then again neither will many other men in town. She’s sweeter on her neighbor, Sam (William Collier, Jr.), but her father isn’t keen on her seeing a Jewish boy, and for that matter his family isn’t wild about the idea either, especially since his sister (Ann Kostant) has been working hard to put him through college and he still has law school ahead of him.

And that’s what the film’s really about – these circumstances, these unfortunate coincidences of time and place and societal attitude that conspire to keep people apart, divorced from true engagement in a community, even when, yeah, everybody does know everybody else. But what good is familiarity without intimacy? Characters like Emma Jones (Beulah Bondi) seem to use small talk as a shield against having to actually care about anyone. So long as she can talk with people about the heat or what the neighbors are up to, she can seem just invested enough, but if anyone starts to let their guard down around anyone else, she’s quick to stamp out their affection with a well-timed snide remark.

Sure enough, tensions explode, and when they do, I think I literally gasped, so shocking was the type of violence even at a time when Hollywood was assailed for just that. As Vidor starts to widen his gaze, he uses crowds to magnify tragedy, the effect of a single act reverberating throughout the neighborhood. What once seemed to be so contained – just this stoop, just this building – is revealed in a much larger context, and the world seems far bigger than its characters imagined. Perhaps, through this, the opportunity of escape is also possible; but you can never truly run away, you can only leave.

Economic strife wasn’t exactly solved by 1962, when Ralph Nelson’s Requiem for a Heavyweight was released, but the difference in how the two films explore it demonstrates how much had changed in the thirty years between. Rafter Romance and Street Scene came out at the height of the Depression. Everybody was poor. It was a tragedy, but it also allowed modest advancement (a steady job selling refrigerators or real estate or driving a cab) to be hugely important. Whatever troubles they faced could hardly be blamed on them (even if Jack might be a bit of a dunce for turning down $300 for a painting). Poverty in the midst of an economic boom is a different matter altogether.

The film, a feature adaptation of a Peabody-winning teleplay that aired on Playhouse 90 in 1956, follows “Mountain” Rivera (Anthony Quinn) as he is forced out of his 16-year boxing career after one injury too many, and has to contend with finding work for the first time in his adult life. Through Grace, a woman at an employment agency (Julie Harris), he lines up a few opportunities that his manager Maish (Jackie Gleason) seeks to squander, hoping instead that the former contender will take up a career in showboat wrestling and continue to pass him his percentage, which he badly needs after betting Mountain wouldn’t last four rounds in a fight that went seven. Here, jobs are everywhere, but the will or confidence is not. Mountain has trouble seeing himself as anyone more than a bag of meat, and he has more than a few people willing to attest to it.

Aside from Quinn and Gleason doing exemplary work, Mickey Rooney also features in an unusual role as Mountain’s cut man. He stands by Mountain and genuinely wants the best for him, but he also has considerably less influence over him than Maish, and Rooney plays the sadness and desperation beautifully. Here is a guy even more dependent on Mountain than Maish is, but who also never tried to stretch out to be more than he was. There are allusions made that he was once a boxer himself, but we get the impression he didn’t get very far in that either.

The film has a touch of that classical American dramatic scolding, letting the arc of the drama fold back in on itself and form a somewhat pat circle, where we can shake our heads and think “oh what a shame”, but it never really reaches beyond itself or its world to something spiritual or cathartic. Still, the performances alone are so striking that I heartily recommend it.