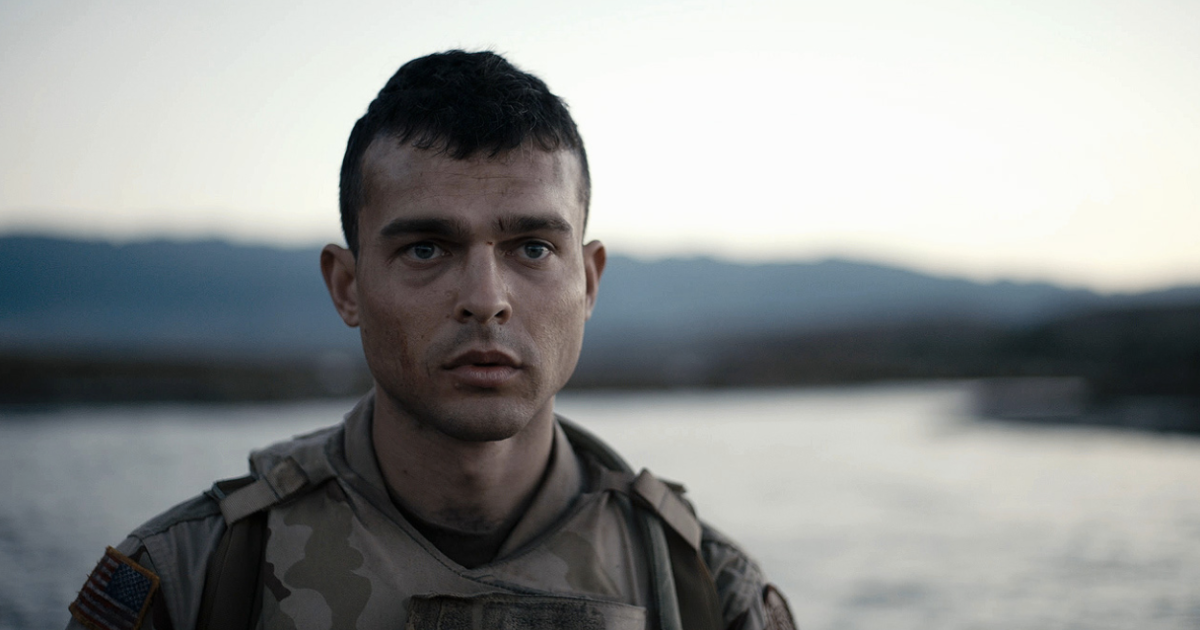 In my review of his new film A Ghost Story, I mentioned that David Lowery’s greatest weakness prior to making it was in tying his creativity to slight variations on other people’s movies. Alexandre Moors’ The Yellow Birds, which Lowery cowrote with R.F.I. Porto, suggests he has not completely worked past that stage of his artistic development. A jumbled mix of stock war-film influences (The Deer Hunter, Apocalypse Now, and Platoon remain potent inspirations for men of a certain age), The Yellow Birds features some fine acting and character work inside a plot that tries five different paths without committing to any of them. This could be a potent way to explore the unpredictability of war, but instead feels like a callous attempt to maintain an audience’s interest in what is already plenty interesting – the corrosive effect of violence, no matter who perpetrates it.

Bartle (Alden Ehrenreich) and Murphy (Tye Sheridan) are new Army recruits and quickly become friends. Murphy comes from a proud family tradition of serving, and has definite dreams and goals for when he gets out. Bartle was restless and aimless and basically needed a job. But close quarters and shared frustrations have a way of ironing out differences. Their sergeant, Sterling (Jack Huston), takes a liking to them, and after a productive time at boot camp, they’re thrown right into the thick of the Iraq War.

This early stuff is fairly strong. Ehrenreich and Sheridan are charismatic actors, just a step or two removed from a strict sense of realism that keeps even their banal conversations engaging. The give-and-take between an easygoing drifter and a naive do-gooder is practically as old as the medium itself, but movies keep returning to it for a reason. The contrast provides friendly conflict, while reflecting the audience’s self-image. We like to see ourselves as a little reckless, while chuckling at how innocent we once were. And for especially for an independent film, the production quality is quite good, with enough of the decorative trappings of Army life to create a real sense of place and responsibility. But even early on, there’s a nagging sense that the whole thing’s going to go off course. Sterling seems a little maniacal. He has a habit of quoting Bible verses out of context, and a crazy look in his eyes. And he has symbolic tattoos. Never a good sign.

Sure enough, we’re soon down the rabbit hole of third-generation Apocalypse Now territory, and in a terribly abrupt shift in the second half, there’s a whole new plot wherein Murphy has gone missing and we’re made to wonder how. It’s clear that Bartle and Sterling know the story, and are fairly torn up about it. Murphy’s mother (Jennifer Aniston) is sure on the hunt for some answers. But rather than tell the story chronologically and trust that the strength of the characters and the tension created from them having to hide what happened will be sufficient to keep our interesting, Lowery and Porto bury the whole thing in a needless mystery. It’s a cheap device that only grows cheaper the more characters allude to “that look on his face” and “what happened” and other pointlessly-vague statements. There’s a sense in which this reflects how Bartle and Sterling are running away from the truth, but that only goes so far, and certainly not as far as the movie pushes it.

Ehrenreich, as always, remains the strongest part of everything he’s in, and he carries the anguish he’s asked to play extremely well. Part of his appeal as an actor is built on slightly withholding some element of himself that will inevitably come screaming out, but even his outbursts seem reticent, as though his characters are embarrassed or hurt that they’ve started behaving like this. It’s a captivating tension to watch unfold. I just hope he starts finding better films to unleash it.