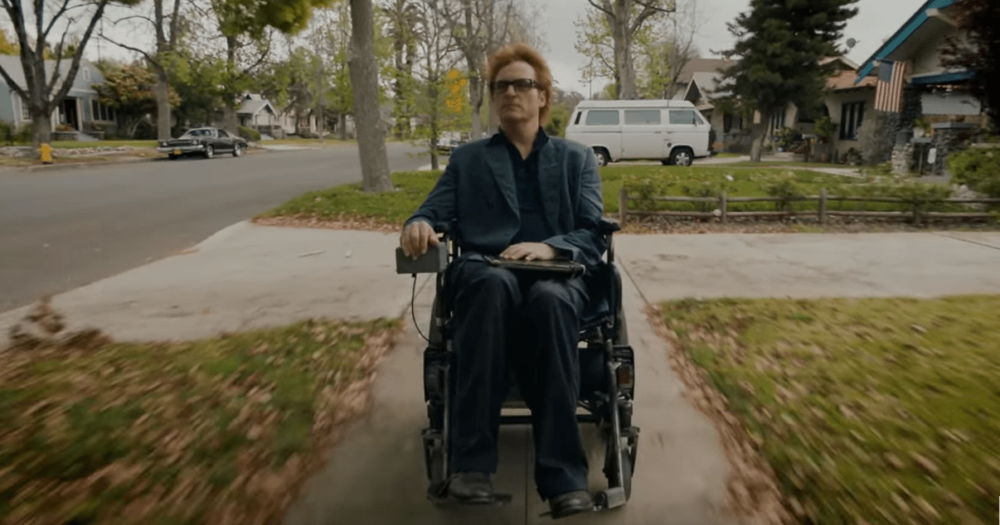 Don’t Worry, He Won’t Get Far on Foot is the first film Gus Van Sant has written since 2007’s Paranoid Park capped off an all-time great run of films, leading to decidedly less-successful, though no less-distinguished, mainstream films. It’s is hardly a return to his long-take portraits of loneliness, but Van Sant’s individual identity is more firmly present, pitting him somewhat at war with a screenplay aiming for a more standard arc.

The film is based on the same-titled memoir by the late John Callahan, a cartoonist and somewhat notorious figure in the Portland art scene back before the Portland art scene became so commodified. Joaquin Phoenix plays John as he battles alcoholism alongside adapting to quadriplegic life following a near-deadly drunk driving accident. His plate, you see, is rather full. But rather than dwell on the routines of John’s physical limitations, Van Sant (perhaps taking a cue from the book itself, I couldn’t say) is more interested in the alcohol. And the inner demons that drive him towards it.

John has something of an epiphany that sets him out on the road to sobriety, but Van Sant wisely situates that rather toward the latter-middle of the picture. As he dips through different moments in John’s life, it can all seem a bit haphazard, but feels well in line with the twelve-step program he soon joins. We see the moments not in the order they occur, but in the order John is in conflict with them. The two-tier framing device finds him, in one scene, accepting an award and giving a speech; in the other, he’s crashed his wheelchair trying to jump a curb. John’s success comes to define his stability, his ability to move forward day in and day out; the sidewalk crash, everything else that comes pouring through his memory.

Like Alcoholics Anonymous, John is preternaturally given to mantras and catch-phrases to move about socially. It’s part of what makes him such a fine cartoonist. What Van Sant sees in those phrases, and in the larger twelve-step program in general, is that we all tend to have an ability to categorize and rationalize our lives into ready phrases, phrases we may not fully grasp the meaning of until, eventually, we do. That confrontation can be rather alarming, but it points to why such programs – or religion or anything else – aren’t as empty and routine as they appear. The phrases will always be there when we’re ready to meet them.

Van Sant took slowing down to the extreme with Gerry, Elephant, Last Days, and Paranoid Park, and he never quite left that space. His films since – Milk, Promised Land, The Sea of Trees (I didn’t see Restless) – have incorporated those lessons to varying degrees, pushing the patience of scenes whenever possible and forcing the audience to sit with some measure of discomfort in heightened confrontations. There’s a spiritual energy that moves through them, making palatable some more conventional (or borderline-ridiculous) movements in the screenplay. Here, the story beats are more familiar, and Van Sant is still very pleased simply to sit with his actors (the supporting cast includes Rooney Mara, Jonah Hill, Jack Black, Udo Kier, Kim Gordon, and Carrie Brownstein, so who wouldn’t), but it sometimes feels in the edit like he suddenly realized he had far more than two hours of material, and rushes scenes to their conclusion faster than they need reach them. It can be a bit jarring, and in a film that already has two framing devices and doesn’t move in chronological order besides them, leaves it hard to keep track of what’s happening when.

Yet the spiritual energy remains, guiding John and us through the daily struggle to resist temptation and deliver us from evil. Most movies about disability garner in the audience a “well I’m glad that’s not me” suggestion. This is not that. Don’t Worry forcefully breaks down all the excuses John makes for himself that get in the way of peace and happiness, showing that everyone makes those excuses to themselves, even in less dire circumstances. We may not even be addicted to alcohol, or to anything. But these excuses encourage our weakness and impede our contentment. It’s quite a lovely film.