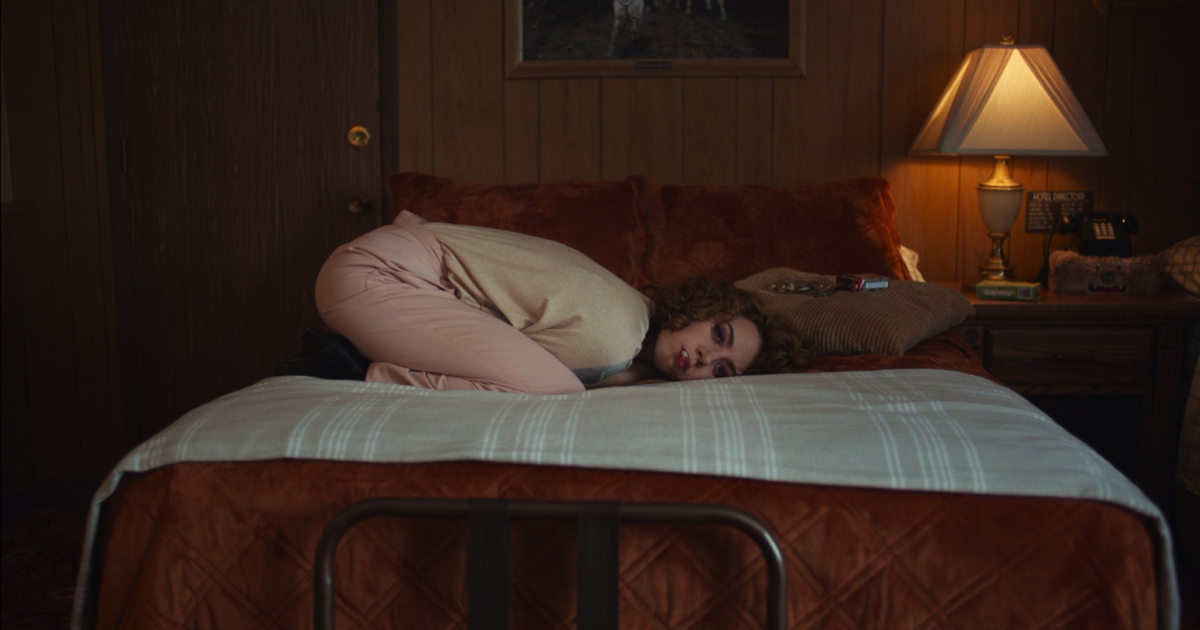 The anti-comedy movement hasn’t exactly been my cup of tea; too often am I bored by the joke of the non-joke, the deadpan in need of burial, the non-sequitur that ultimately just ends. Jim Hosking’s new film, a follow-up to his controversial 2016 mini-sensation The Greasy Strangler (which this writer has not seen), has another of these traits that perhaps grates the most – characters just yelling their totally banal lines. Luckily, though, this is mostly relegated to the supporting roles. In the lead, Aubrey Plaza and Jemaine Clement provide a certain specificity and magnetism that is too often absent from these sorts of projects.

Plaza does not play the title role. Beverly Luff Linn (Craig Robinson) is instead her former boyfriend, whom she believed dead, and who is coming to her nondescript town for “A Magical Evening” of some sort of performance at a local hotel. Through means too convoluted to get into for a routine plot summary, Lulu (Plaza) runs away from her husband with her brother’s cash box and Colin (Clement), the thief sent to steal it, checking into the very hotel of Mr. Luff Linn’s future performance and intent on finding out just what happened.

Already, perhaps, the film is helped by a certain plot propulsion, though by the time the Magical Evening is postponed twice due to Beverly’s gastrointestinal issues, we’re not exactly in Speed territory here. The film is carried by Plaza’s near-insane commitment, that particular mix of horny and hate-filled she has essentially perfected since Parks & Rec gave her license go crazy for at least a few years. Clement plays the perfect sort of foil to this; Colin is desperately in love with her and subservient at every turn, which Lulu uses to her advantage but which also endlessly aggravates her. Clement has so often played an aggrandized confidence that it’s a thrill to see him wallow in self-pity and hatred, screaming at himself over every stupid thing he says and taking delight in the smallest moment of connection. “I’m having a really great time with you,” he tells Lulu early on. “And that was a great call on these cheesy onion rings,” stuffing a few in his face.

The only thing that really disappoints in the film is that, for all its striving for strangeness, it ultimately comes to a fairly common rom-com conclusion, almost out of nowhere. This is a persistent problem in independent cinema, especially Hollywood-adjacent fare such as this, a symptom of an unsteady industry that feels it has to provide familiar emotional beats and happy endings to get by. I don’t think this is what audiences really want – I know it’s not what I do – but then again I’m not tracking the returns and maybe it’s the only thing keeping the whole thing afloat. But Hosking doesn’t even attempt to build to his, making instead a sudden pivot away from some rather tender reflections on the way people drift apart, only to slam them back together. I enjoyed the film well enough for Plaza and Clement’s work, and the film focused on them enough of the time to make it worthwhile, but to whatever degree a “star” presence measured Hosking’s temper, it may have also compromised it.