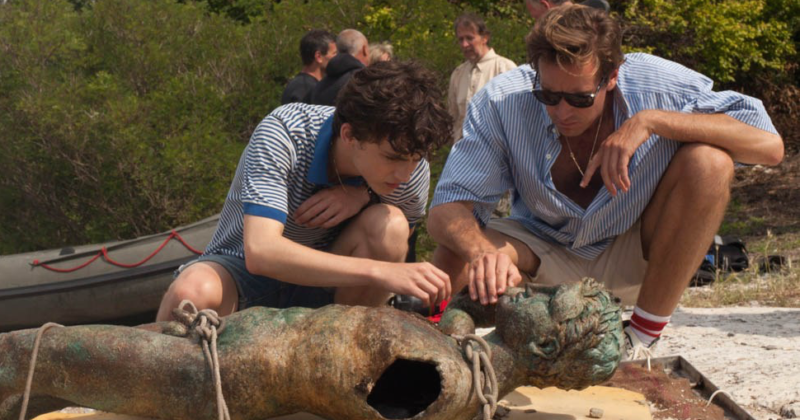 In a time when I’m starting to feel a little overwhelmed by the unending, muscular tracking shot, along comes a wholly elegant use of the long take in Luca Guadagnino’s sensational Call Me By Your Name. Elio (Timothée Chalamet) and Oliver (Armie Hammer) have taken a trip into town from Elio’s parent’s villa, where Oliver is working for a few weeks alongside Elio’s academic father. In town, they circle a statue sort of situated in a town square. Oliver confidently orbits the end furthest from us, while Elio meanders around nearer. They’re discussing history and art, of course, two of the many subjects in which Elio is versed. Oliver wonders if there’s anything Elio doesn’t know. Elio rightly admits that there’s quite a lot. Not the sort of things one learns in books.

The camera tracks from left to right and pans as need be as Oliver and Elio gradually test each other’s boundaries, each movement seeming to wind the tension in the moment tighter. Oliver has already made a casual pass at Elio. Elio has observed Oliver admiringly. Guadagnino has directed his whole cast, but particularly these two, to a degree of physical comfort familiar in his films (most recently, I Am Love and A Bigger Splash) but largely uncommon to contemporary cinema. In most films, actors look like they’ve repeated a gesture twenty times already, and only exist in the space between “action” and “cut.” Not so in Guadagnino. His actors bob about and lounge around as though they genuinely have been doing nothing for hours. Their elegance comes from their total relaxation and certainty of their bodies.

It is fitting that Guadagnino and cinematographer Sayombhu Mukdeeprom (Uncle Boonmee Who Can Recall His Past Lives) crafted this shot all the more. Elio, only 17, has a teenager’s awkwardness, but this is the first real time we sense him completely out of his depth and unable to even affect the confidence most 17-year-olds (him especially) tend to. As Oliver glides in the distance, certain of where this conversation can lead, Elio stumbles and swings his arm and avoids eye contact. They circle the entirety of the statue, on opposite sides, with a camera openly uncertain of where they might wander next. It seems capable of chasing them if one should suddenly run away, and so seems on edge for one to do just that. It stalks them, waiting for one to make their move. And when even the camera doesn’t know what’s going to happen next, but doesn’t resort to the cheap theatrics of handheld wobbling, all in the midst of a very loaded discussion about sex…that’s tension. “We shouldn’t talk about these things,” Oliver quickly asserts, but Elio is not so quickly dissuaded. And Oliver is not so quickly disinterested.

And then, freedom – the camera rapidly pans up to the sky as Oliver and Elio meet on the other side of the square, and falls back down, as though a great weight has been lifted from it. Oliver jogs into a nearby shop that was copying his work, jogs out to discover he’s lost a day’s work in the process, and the pair decide to go swimming.

It is not the first time Guadagnino’s magnificent, masterful film left me breathless, and far from the last. But it does summarize so much of what makes it outstanding – the way people carve away at others to gain intimacy, the freedom of the performances, the beauty of the camerawork, the interaction between location and emotion (and between intellect and heart), the interplay of different modes of physical expression, the way they reflect different degrees of openness with sexuality, the way we conceal meaning in everyday conversation (subtext this rich is rarer everyday), the professional drive, and the desire to let that profession provide its own escapes. It’s also incredibly sexy, and that’s not for nothing.

Written By
Scott Nye
More from Scott Nye
An extraordinary giallo film gets a stellar transfer and a so-so bundle...
Read More