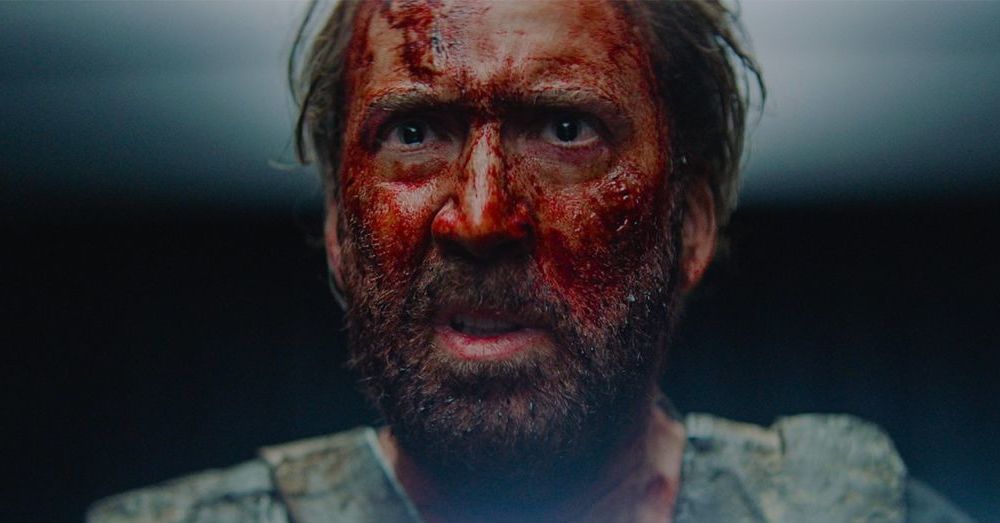 Panos Cosmatos made quite a splash back in 2010 with Beyond the Black Rainbow, a ponderous sci-fi horror film that he quite accurately described as a sort of adaptation of the film you’d imagine when looking at VHS covers for inevitably-terrible genre films. It’s a bit amorphous and trippy and doesn’t entirely make sense, but it works as the mind works. I’m a bit surprised in this time in which low-budget, sharply made horror is prevalent that the man who made one of its best entries went so long before directing again, but here we sit with the unholy beast that is Mandy.

It, too, is a bit like the film you might imagine from a VHS case, if that imagination was fueled by a drug trip that gradually dawns back to reality. Red (Nicolas Cage) and Mandy (Andrea Riseborough) live out in the wilderness in relative peace, only to find their very existence damned when cult leader Jeremiah Sand (Linus Roache) takes an interest in the latter, certain her tossed-off gaze indicated boundless devotion. Cult leaders will do that sort of thing, I suppose. So they summon some sort of hell-demons to kidnap the pair and begin brainwashing Mandy into joining their sedated bunch, a brainwashing that involves the sting of some awful insect and an even-more-awful original song Sand made about himself.

This is the film’s peak, the point at which I thought it capable of almost anything, as Cosmatos employs a crossfade technique to blend Riseborough and Roache’s face so that at some moments, I was genuinely unsure of who I was seeing more of. One doesn’t often get to make a flattering comparison to Bergman’s Persona, but here we are. Riseborough, playing a character under heavy sedation just barely able to make her will shine through, will go largely unheralded against Cage’s more outlandish performance, but her steady, no bullshit energy is captivating, and the first section of the film so depends on her gaze to hold our attention, which it more than does.

Well, Mandy doesn’t really take to the brainwashing the way Sand would like, and punishes her for it, sending Red off on a quest for vengeance, and possibly rescue. The film, from there, once so imaginative and filled with possibility, falls into rather standard video game plotting – escalating from boss to boss, gaining new weapons and skills along the way. Now, don’t get me wrong, this section also has Cage going full Cage and eventually fighting a man who wields a…I’m gonna say six-foot chainsaw…so it is far from devoid of its own sort of pleasures. But it never quite takes the final leap into the insane that it needed to after suggesting such potential at the start. What once was a film only Cosmatos could deliver becomes a film most modern practitioners of this sort of thing could, and that’s too bad.

What does set it apart, to whatever minor degree it is set apart, is Cage. The one-time Oscar winner has gone through so many career permutations that I can only be glad that he is still recognized by so many directors as the talent he is. There’s one scene – one shot, really – in particular, after narrowly escaping the clutches of the cult, that he is given full range to shine, unloading Red’s titanic trauma and turn towards determination. It’s too much and just right, as the best Cage work is.