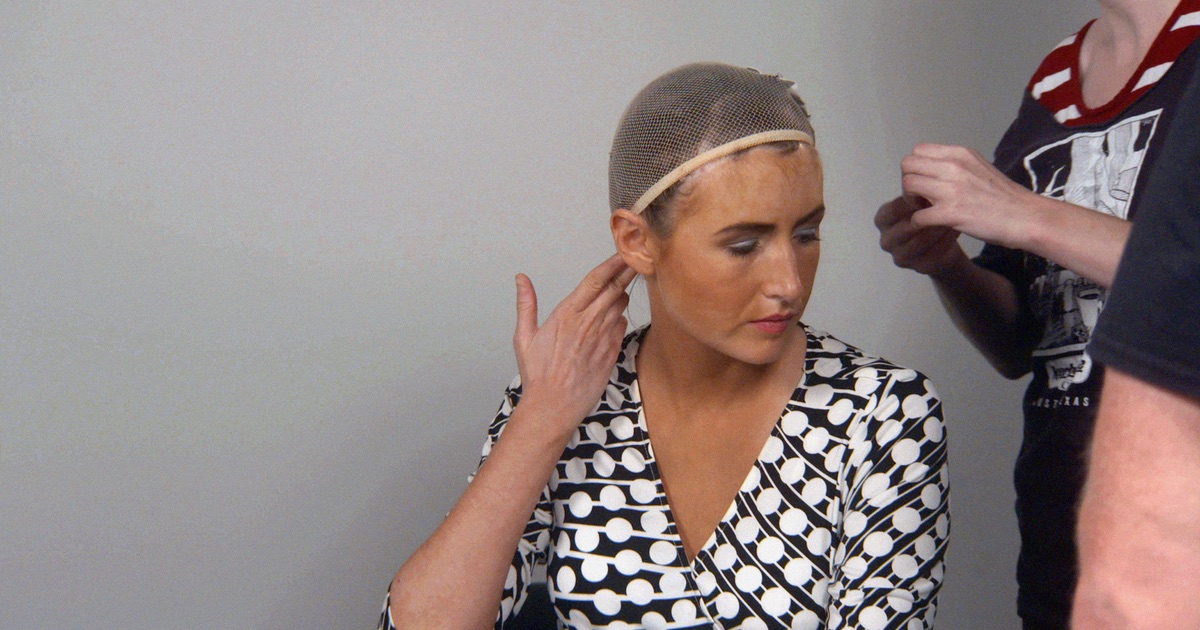 In 1974, Florida talk show host Christine Chubbuck shot and killed herself live on the air. The story – which has existed far more in people’s imaginations than it has in actual fact, as the taped footage has not been seen since it originally aired – partially inspired the 1976 movie Network and has become something of an object of fascination for many. In fact, the story has become the basis for two films that played at this year’s Sundance Film Festival. Antonio Campos directed Rebecca Hall in the other, simply titled Christine, which by all accounts (this reporter has not seen it) is a fairly straightforward, though artfully-rendered, exploration of Chubbuck’s life and struggles.

Kate Plays Christine takes a different approach. Robert Greene is making a documentary about actress Kate Lyn Sheil as she prepares to play Chubbuck for a movie that doesn’t exist. Oh, she’s still putting in all the work – she reads books on suicide, gets fit for a wig, learns to fire a gun, travels to Sarasota, Florida to speak with locals who knew her, and even attempts various tanning procedures to get her skin tone closer to Chubbuck’s. She’s running up against some limits, chiefly that very little footage of her subject in any context is publicly available. She’s struggling with her responsibility to Chubbuck and her personal limitations as an interviewer/investigator, never mind the toll it takes on a person to thoroughly research suicide as a means of reaching the same emotional state as someone who went through with it.

A certain type of audience member (and there were a few at the screening I attended) might then say, “Sure, but it’s not real.” Well, without wanting to be an ass about it…isn’t it? What’s interesting about Kate Plays Christine is watching Sheil go through the whole process purely for the artistic benefit of going through it. I’m a little unsure the overall construction of the film – which ends in the overstated confrontational mode that has plagued nearly every iteration of this type of cinema, from Ingmar Bergman through Joe Swanberg – is as searing as it proposes to be (the film begins with ominous, blurry images of Sheil preparing for the climactic scene as Keegan DeWitt’s ethereal score plays behind it), but Sheil’s investment in it more than makes up for any shortcomings. Beyond the curiosity of watching all that she does to prepare for a role, her earnestness in so doing makes real any element that is not. If we watch someone put in the work, is that not in some way the same as watching the end result? And if she knows there is no end result, might she invest more in the work, knowing the work is all there is?

Most importantly, Sheil is just flat-out one of the great modern actresses. Her lack of assertiveness works beautifully with how willing she is to put herself out there, and not just physically (though, sure, that too). When she learns Chubbuck was a strong swimmer, she dives into the ocean despite admitting she’s a weak one, her Christine wig immediately falling off the moment she descends, making the moment all the more uncomfortable. She’s open about her struggles as a professional actress, saying that she’s quit many times. Sheil’s resume does not reflect this, and to what extent Sheil is also playing Kate is certainly not for me to know. But it’s emotionally authentic work, honest and vulnerable. Her work her is commanding to the point of removing the reflexive authorship one tends to grant a director, and beyond the more performative moments of combativeness between Greene and Sheil (particularly towards the climax), they do seem to be challenging one another to get to the root of this desire to explore, and possibly exploit, tragedy. There’s always a sense of Greene nagging her forward from offscreen, and Sheil’s resistance in certain areas forms the moral center of their quest. It’s not that Kate (as a character or an actress) is some “pure spirit” or anything; she grows more and more curious about Chubbuck as the film goes on, but her natural discomfort with putting certain questions to real people who were really involved with this real person gives the film its complexity.

I suspect I’ll still be wrestling with Kate Plays Christine through most of this year; there are a lot of internal contradictions and complications that are fascinating, but the extent to which its more didactic sections overstate this aspect gives me pause. Nevertheless, Sheil is such an uncommonly intuitive and fascinating presence that there isn’t a moment of the film that is uninteresting. I hope it finds distribution so I might keep working through it.