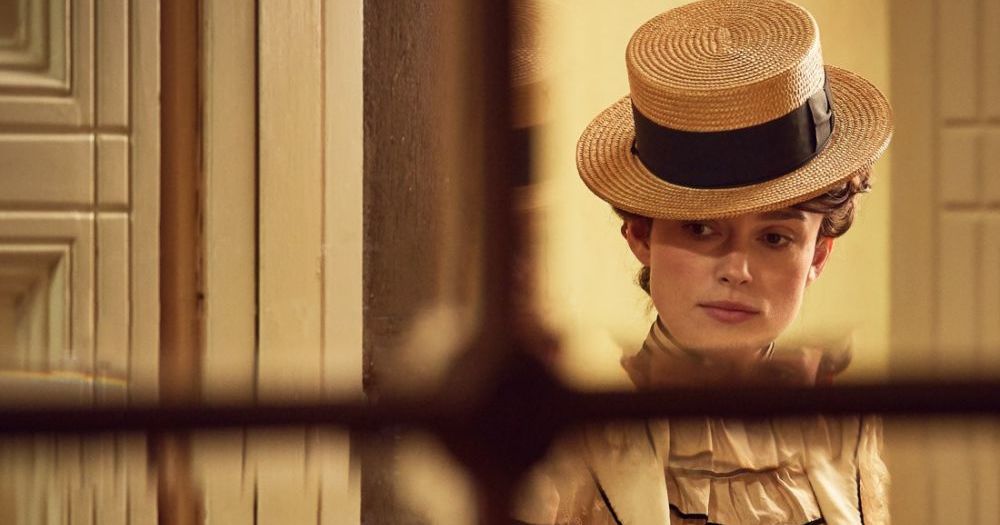 About a quarter of the way through the film that shares her name, Colette (played by Keira Knightley) sits down to write what I gather became quite a famous opening line – “My name is Claudine, I live in Montigny; I was born there in 1884; I shall probably not die there.” We hear this line again and again throughout the film, as Claudine à l’école spawns not only a series but an entire culture. But it never has the same power as that first time, when Colette smiles in amazement at having written it. Not because she’s particularly taken with her own cleverness, or foresees the success it may spawn, but for the very act of having written it at all. For the act of creating something new, something personal and true. For realizing one’s thoughts have a shape and some value; for the sudden confrontation with one’s own personhood.

Colette has to this point been in a rocky-but-not-unsatisfying marriage with Henry Gauthier-Villars (Dominic West), called Willy by all who know him, himself included. Like most women living at the turn of the century, she was a supporting character in his story, and he needed a lot of support running a literary factory, churning out in his own name what others produced. That he should enlist his wife to the same task only makes sense – she won’t be paid after all. What he wouldn’t expect is that the popularity of her novels would far exceed anything else he’d produce, making him the toast of Paris and leaving her, well, the great man’s wife.

“Do you ever feel you’re just playing a role? As a wife or a mother?” she asks her family’s housekeeper, during one of her and Willy’s many separations. Colette is enamored of the sensation one feels at realizing life’s limitless possibilities; that you can be and feel so many other things than what you’d been told about. Why shouldn’t she be a writer? Or an actor? And why shouldn’t she sleep with women?

Her marriage is certainly no barrier. Willy is a notorious philanderer, so fair’s fair, but he sees no jealousy at all in such affairs. Intellectually, at least, it quite turns him on. And she takes quite some time (and quite a few offenses) before she falls out of love with Willy. Too often, mainstream costume dramas simplify the social conflicts of the time they depict, eager to please their audience with characters who act contrary to the constrictive mores of their time simply so we can tell ourselves that we’d behave the same if given the chance. Colette tells Willy off a number of times during the film, but keeps coming back to him. And the film doesn’t look down on her for it. Willy is a terribly charming man (West’s performance is beyond magnetic; Willy’s life is performance, and West knows how to slide in the inner life) who seems awful open-minded about how she’d rather spend her sex life, after all. Knightley and West’s rapport keeps them forever equals, growing closer with every one of Willy’s offenses, her implicit forgiveness of him not seeming a weakness nor a strength – simply a recognition of how hard it is to live without someone in whom you’ve invested so much.

Which is not to say she’s not terribly passionate about her affairs, increasingly so as time passes and Willy becomes more intolerable. This is no light depiction of lesbianism, nor is it exploitatively erotic. The sex scenes are brief but indelible, the physical connection created within them clearly bringing out something more personal in Colette than the sex she has with Willy. Co-writer/director Wash Westmoreland leaves more time to the seduction, and eventual romantic affection Colette develops with her lovers. At every turn, Colette hungers for more than life, and is drawn to those who can open up those spaces. Early on, Willy is the answer – he takes her out of the country and into Paris, opens up her artistic side, nurtures her sexuality. But he has his limits, and even if he wasn’t such a jackass, he couldn’t be enough for where she ends up.

Knightley’s best performances – in Domino, Anna Karenina, Pirates of the Caribbean: Dead Man’s Chest, A Dangerous Method, or Atonement – have to an unusual degree been accompanied by the right costumes. This is not to say she relies on them as such, but she expresses so much in posture that indifferent costuming leaves the range of her ability untapped. That is, to put it lightly, not a problem for Andrea Flesch’s work in Colette. Virtually every wardrobe Knightley has is instantly iconic, and boy can she work them. The saunter she does when first wearing a tuxedo; the ease in a dress brought from her village; the way she gradually grows into the Belle Époque culture through its clothes until she comes to define them.

It also helps that, as with those previously-mentioned films, she’s working with a director with what I’m going to go ahead and say is a mastery of the camera. Wash Westmoreland’s last film, Still Alice (which he co-directed with his late partner, Richard Glatzer), was smartly made, if not exactly a showcase for aesthetic. Colette is a marvel, incorporating the lessons of Max Ophuls without slavishly recreating them nor belaboring the point. Westmoreland’s setups (I unfortunately forgot to note the cinematographer and IMDb is unhelpful here) allow the actors to create the rhythms of the scene, bobbing and weaving among them. This isn’t the ostentatious approach Joe Wright takes, nor the stately assuredness of David Cronenberg, but as with costuming, Knightley benefits tremendously from an engaged camera that she can react against and provoke.

I’m approaching an abundance of words for a film few have seen, so I will stop, other than to conclude that this is, top to bottom, a beautiful, passionate, engaged film (that score!!!) that I loved, start to finish. I’d eat it all again if I could.