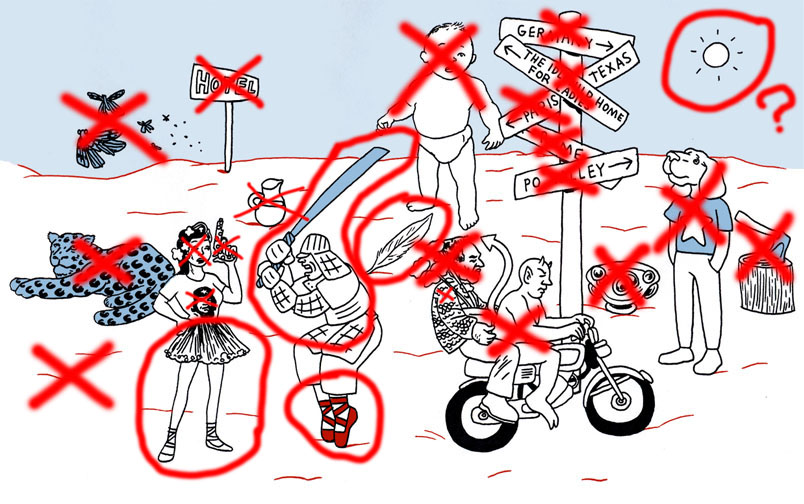 So, looking at the Cryptic New Years Drawing that we received back in January was a pretty clear roadmap for their release schedule so far. Over the past three months, we’ve seen almost all of the films that were hinted at in this drawing have their official announcements. Clearly this drawing has not contained all of the 2010 films, but it has been fun crossing them off each month.

What has been announced so far? I’ll break it down for you:

So, according to my calculations, we have a few releases that are clear from this image left to announce.

The feather under the baby, which we have taken to be Zolta Korda’s The Four Feathers (1939), has not been announced yet.

The red slippers, clearly a nod to the Red Shoes restoration, has not been officially announced either, but you can actually see the film over on Netflix Watch Instantly (sadly, not in HD).

The samurai holding the blue sword is one of the less clear release hints. Could it be the recent Sanjuro / Yojimbo Blu-ray releases? Could it be the yet unannounced Seven Samurai Blu-ray? Maybe the Zatoichi – The Blind Swordsman, that Criterion recently added to their official Hulu Channel?

I also circled the bottom half of the Lola Montes / Che t-shirt wearing woman, mostly because it stood out as perhaps a separate release from Lola Montes. Is it a reference to perhaps a different film from the Red Shoes? Maybe a Blu-ray release of Martha Graham – Dance on Film?

Finally, I circled the sun as well, mostly because we had not touched on it with our initial post. Is this simply a piece of the drawing, without any sort of symbolism? I find that unlikely, but I haven’t found any movies that it could be hinting at. Also, does the blue sky represent an overall shift to Blu-ray? Or perhaps that Blu-ray is in the air? Or “up in the air?” Not that I’m saying an Up In The Air Criterion release is due, but rather, the whole Blu-ray shift is not as definitive as some would like to believe?

Also, one last crazy theory of mine: perhaps the line work for the red desert could also represent the Thin Red Line rumored (not so much a rumor) release?

There are certainly a lot of questions presented in that paragraph, but I wanted to throw this out to all of you readers and listeners, to see what your thoughts were on the remaining titles from this drawing. Should Criterion commission a new piece of art from Jason Polan, laying out the second half of the year? Let us know what you think, in the comments below.