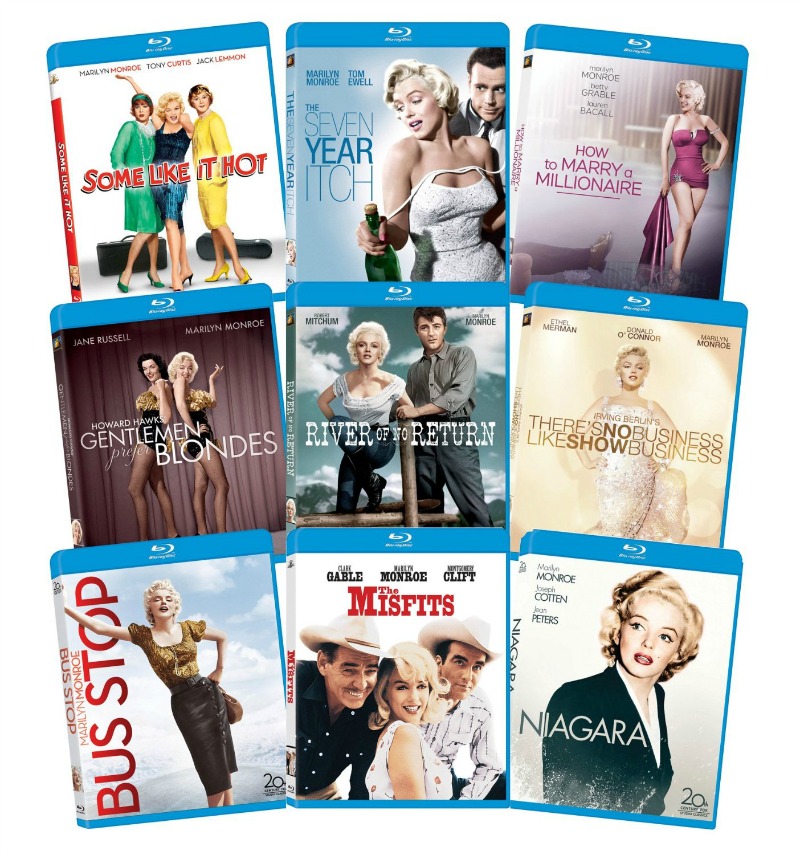 A naive but stubborn cowboy falls in love with a saloon singer and tries to take her away against her will to get married and live on his ranch in Montana.

Marilyn Monroe and Joseph Cotten are an ill-suited couple staying in the cottage next to happy newlyweds Casey Adams and Jean Peters near Niagara Falls. While sightseeing, the newlyweds see Monroe kissing her young lover (Richard Allen) and hear them plot to kill her husband, making it look like suicide. When the latter goes missing, Monroe is asked to identify a body and discovers it’s her lover. Her husband’s vengeance threatens them all.

Marilyn Monroe and Jane Russell sizzle, sing and dance as a couple of gold diggers out to land rich husbands. This Technicolor film fable follows the exploits of two gorgeous women aboard a luxury ocean liner. One (Monroe) loves diamonds and the other (Russell) loves men. On the ship with them are an elderly diamond mine owner (Charles Coburn), a team of handsome and muscular Olympic athletes, a fascinating but very young millionaire (George Winslow) and a nosy private eye. Packed with 40 minutes of production numbers, Gentlemen Prefer Blondes includes the legendary title song and “Diamonds Are a Girl’s Best Friend.”

How to Marry a Millionaire

Three New York models, Shatze, Pola and Loco set-up in an exclusive appartment with a plan: tired of cheap men and a lack of money they intend to use all their talents to trap and marry three millionaires. The trouble is that’s it’s not so easy to tell the rich men from the huxters and even when they can, is the money really worth it?

River of No Return

After his wife dies, Matt Calder (Robert Mitchum) and his young son begin a new life in the breathtaking, rugged Northwest wilderness, where Calder is robbed and beaten by ruthless gambler Harry Weston (Rory Calhoun). When Weston’s beautiful fiancée (Marilyn Monroe) then decides to nurse Calder back to health, the insanely jealous Weston risks their lives by taking them all on a ride down a treacherous river in this spectacular looking Western.

Molly and Terry Donahue, plus their three children, are The Five Donahues. Son Tim meets hat-check girl Vicky and the family act begins to fall apart.

It’s every man’s fantasy – a summer romance with the sexiest woman he can imagine. Richard Sherman (Tom Ewell) is a happily married man whose wife and son are off on vacation when his tempting new neighbor (Monroe) sneaks in one hot summer night to cool off in his air-conditioned apartment. How does an ordinary man deal with this irresistible temptation after seven years of marriage? Find out in this 1955 treasure featuring Evelyn Keyes and Marguerite Chapman and directed by Oscar winner Billy Wilder.

When two musicians witness a mob hit, they flee the state in an all female band disguised as women, but further complications set in.

A sexy divorcée falls for an over-the-hill cowboy who is struggling to maintain his romantically independent lifestyle in early-sixties Nevada.

Written By
Ryan Gallagher
More from Ryan Gallagher
This is the podcast dedicated to The Criterion Collection. Rudie Obias, Ryan...
Read More