With everyone and their mothers seemingly digging through the recently released DVD/Blu-ray of The Social Network this week, anticipation is hitting a fever pitch when it comes to David Fincher’s (The Curious Case Of Benjamin Button) follow-up, his take on the Stieg Larsson novel, The Girl With The Dragon Tattoo.

Now, thanks to W Magazine (via Coming Soon), we have our first, official look at the film’s lead character, Lisbeth Salander, played by Social Network co-star, Rooney Mara.   And I must say, she looks absolutely fantastic. 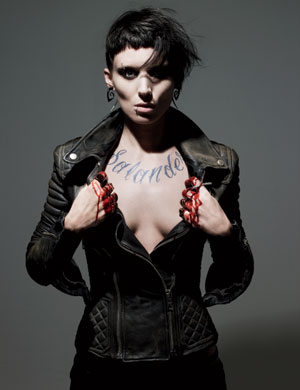 The film, set to hit theaters on December 21st of this year, uses a script penned by Steven Zaillian, and will reteam Fincher and his Social Network composing duo, Trent Reznor and Atticus Ross. Also starring Daniel Craig, Christopher Plummer, Robin Wright and the always great Stellan Skarsgard, this is one of 2011’s most hotly anticipated projects, and these photos only add to that anticipation.   She doesn’t look to be doing much different from Noomi Rapace’s take on Salander, but then again, with a basis coming from a beloved series of novels, there really isn’t much she could do.   Simply put, it looks bloody fantastic.