One of the more prized members of the Criterion Collection, the stunning Luchino Visconti film, The Leopard, is set to make the jump out of the collection, for a new Blu-ray release.

According to blu-ray.com, BFI Video has announced the release of a new Blu-ray release of the film, which will hit shelves on June 21. It will be presented complete and uncut, in widescreen, and with an all new transfer taken right from its original 35mm print. The transfer was even overseen by the film’s cinematographer, Guiseppe Rotunno.

The release will feature a commentary by Italian film scholars David Forgacs and Rossana Capitano, an interview with Claudia Cardinale, the film’s Italian trailer, and a booklet featuring essays and more.

However great it may be to see this classic film get yet another take on Blu-ray one cannot argue that the film’s upcoming Criterion Blu-ray will be making this release look like a Walmart $5 bin release. The Criterion Blu-ray features multiple video interviews, audio commentaries, an hour long documentary on the making of the film, multiple trailers and news reels, as well as a stills gallery, which for a film this visually extravagant, is one hell of a feature. That said, this is a UK release, but still, for those who are looking to pick this one up, wait a week, and grab the end all, be all copy of this luscious visual feast on Blu.

[Note from the Editor: Last month, we told you about Gucci helping to restore The Leopard, read about it here.]

The Upcoming Criterion Collection Blu-ray release of The Leopard: 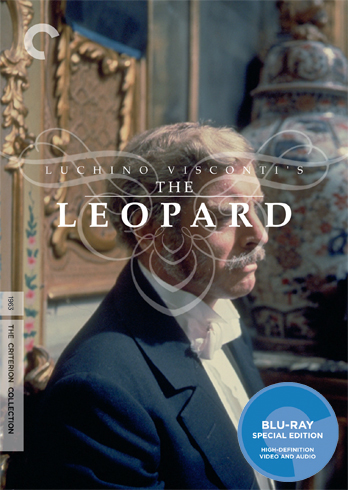 Making its long-awaited U.S. home video debut, Luchino Visconti’s The Leopard (Il Gattopardo) is an epic on the grandest possible scale. The film recreates, with nostalgia, drama, and opulence, the tumultuous years of Italy’s Risorgimento‘”when the aristocracy lost its grip and the middle classes rose and formed a unified, democratic Italy. Burt Lancaster stars as the aging prince watching his culture and fortune wane in the face of a new generation, represented by his upstart nephew (Alain Delon) and his beautiful fiancée (Claudia Cardinale). Awarded the Palme d’Or at the 1963 Cannes Film Festival, The Leopard translates Giuseppe Tomasi di Lampedusa’s novel, and the history it recounts, into a truly cinematic masterpiece. The Criterion Collection is proud to present the film in two distinct versions: Visconti’s original Italian version, and the alternate English-language version released in America in a newly restored special edition.