With more and more people staying home to watch their feature films, apparently one theater chain is attempting to curb that very ideal.   Or at least give themselves a leg up against other theaters in the world of digital distribution.

According to a press release, Canada’s biggest theater chain, Cineplex Entertainment (behind 129 theaters and 1,342 screens in Canada) has launched a ‘digital storefront’ that allows Canadians to rent movies, day and date as their respective DVD/Blu-ray releases (meaning no 28-day window) for the price of $4.99.   Users will also be able to buy discs, at $19.99 for DVD and $36.99 for Blu-ray. 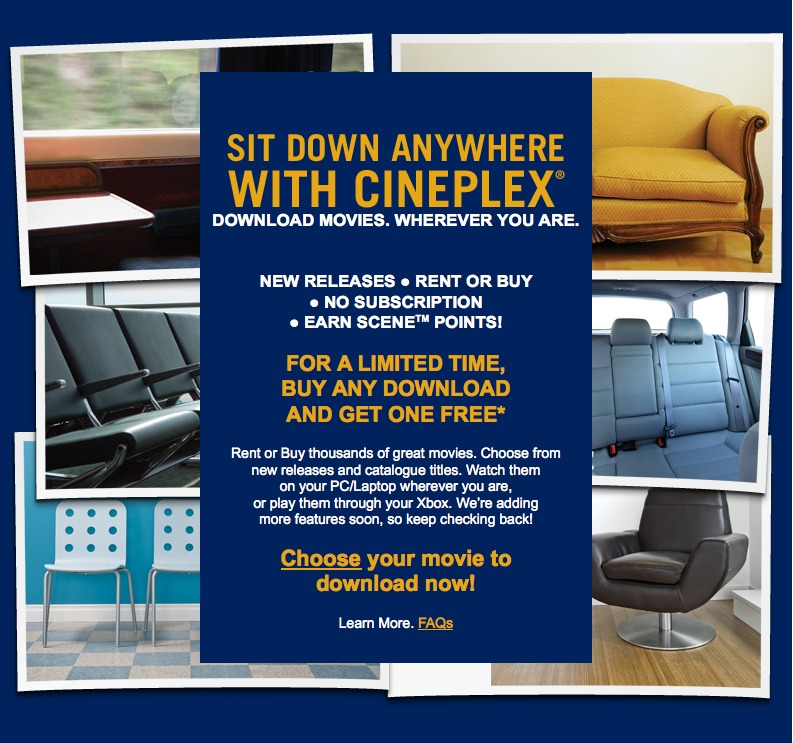 Currently available to Canadian residents only is a buy-one-get-one-free deal, and the company has signed deals with the likes of Sony, Universal and Warner Brothers.

While I have seen my fair share of theaters sell DVDs at their respective establishments, this is far different than many of those cases, which are ultimately used copies of relatively older releases.   Also unable to rent DVDs, this ultimately changes the game for theater DVD/Blu-ray distribution.   One of the smarter moves I’ve seen a theater chain make in some time, it will be interesting to see what other chains, or any here stateside, decide to take up this model.

Cineplex Entertainment (TSX: CGX.UN) today announced movies can now be digitally downloaded into your home with Download To Own (DTO) and Video on Demand (VoD) service from the Cineplex Store at www.Cineplex.com. New releases will be available for digital download on the same day they are released on DVD and Blu-ray. This new service complements the DVD and Blu-ray products already available for purchase at the Cineplex Store. Customers will now have the option to easily and seamlessly select whichever option best suits their movie-watching needs. Effective today, digital downloads purchased from Cineplex.com can be played on your PC or other compatible devices.

“When Canadians think of movies, we want them to think of Cineplex,” said Ellis Jacob, President and CEO, Cineplex Entertainment. “The best way to experience a movie is still in-theatre but when guests want to enjoy the movie again, they can now choose from a variety of formats available from Cineplex.com including digital downloads via our Download To Own or Video on Demand service, or on DVD or Blu-ray.”

To celebrate the launch of the download service, Cineplex Entertainment is offering a buy one get one free promotion until December 31, 2010 where customers who purchase any regularly-priced DTO movie will receive a second movie of equal or lesser value free. Some restrictions apply so visit Cineplex.com for full promotional details.

Today the Cineplex Store at Cineplex.com features thousands of titles available for DTO or VoD from major motion picture studios such as Sony Pictures Home Entertainment, Universal Pictures and Warner Bros. Hundreds of titles will be added daily over the next several weeks as we continue to populate our digital library. New releases being added this month include Scott Pilgrim Vs. the World, Sex and the City 2 and Eat, Pray, Love, and coming in December are Inception, Despicable Me and Salt to name a few.

DTO and VoD purchases made from the Cineplex Store can be stored either on a customer’s hard drive or in a digital locker contained within the Cineplex Player that customers will download when they make their first digital download purchase. The locker enables purchasers to store their movie safely and securely without depleting space on their device’s hard drive while still allowing unlimited future downloads of DTO titles. The Cineplex Player and digital locker technology are powered by RoxioNowâ„¢ from Sonic Solutions ® (NASDAQ: SNIC).

Members of our SCENE entertainment rewards program will continue to earn points on all DVD and Blu-ray purchases made through Cineplex.com and will now earn points on digital downloads (DTO and VoD) as well. SCENE members can also redeem their SCENE points to purchase DTO titles, movie tickets, Cineplex gift cards, DVD, and Blu-ray movies. “This is another example of the tremendous added-value that only SCENE members enjoy,” said Jacob. “Cineplex rewards SCENE members for purchasing a movie – whether it is in our theatres or online via our Cineplex Store.”

Today’s launch is the first of a multiphase rollout, with several key features planned for a 2011 update. Cineplex.com will feature streaming High Definition content for DTO and VoD titles and, once available, the ability to store content in a cloud-based UltraVioletâ„¢ account. UltraVioletâ„¢ is a digital rights locker and account management system that will allow consumers to watch their digital entertainment across multiple platforms, such as connected TVs, PCs, game consoles, smartphones and tablet PCs, in an easy, consistent way.

UltraViolet is a newly created consumer brand whose goal is to become the symbol for digital entertainment – one that gives consumers the freedom of access wherever they are, and the broadest choice of content, stores and devices. It was created by the Digital Entertainment Content Ecosystem LLC (DECE), which is a cross-industry consortium dedicated to driving a new, open market for digital content distribution. Cineplex Entertainment is the only Canadian-based retailer and motion picture theatre exhibitor to be a member of this group of nearly 60 world-renowned consortium members.

“We are working to ensure Cineplex.com is the most complete online experience possible for Canadians who want the best entertainment options available,” said Ellis Jacob. “By adding the digital download service to Cineplex.com, especially with the features planned for 2011, in addition to our existing entertainment content and online ticketing, we believe we are creating one of the most powerful online entertainment experiences available to Canadians.”

Headquartered in Toronto, Canada, Cineplex Entertainment owns, leases or has a joint-venture interest in 129 theatres with 1,342 screens located from British Columbia to Quebec. As the largest motion picture exhibitor in Canada serving approximately 70 million guests annually, Cineplex Entertainment is the exclusive provider of UltraAVXâ„¢ and the leading exhibitor of digital, 3D and IMAX projection technologies in the country. With a workforce of approximately 10,000 employees, the company operates the following brands: Cineplex Odeon, Galaxy, Famous Players, Colossus, Coliseum, SilverCity, Cinema City and Scotiabank Theatres. Cineplex Entertainment is proud to be a major supporter of The Starlight Children’s Foundation and regularly conducts various fundraising initiatives throughout the year including the annual Starlight pin campaign. The units of Cineplex Galaxy Income Fund, which owns approximately 99.7% of Cineplex Entertainment LP, are traded on the Toronto Stock Exchange (symbol CGX.UN). For more information, visit www.cineplex.com.