Im Sang-soo’s remake of the essential 1960 Korean classic The Housemaid is one of the more highly anticipated films to come from South Korea in recent years. For many decades, Korean cinema had been weighed down with the trauma of division, the government’s control of the film industry and the extreme censorship laws, virtually invalidating film as a mode of free expression. That Kim Ki-young’s The Housemaid made it through was a stroke of luck due to a transitional change of regime. This very simplified context should make it clear why hype surrounded how the New Korean Cinema was going to interpret a rare and iconic example of pre-1990’s Korean film. The ‘remake’ can barely be called that; it is more of a re-imagining. The decision to start from scratch and only use the basic premise (family hires a housemaid; disaster ensues) is inspired. Unfortunately Im Sang-soo’s take on the story is only intermittently successful and is ultimately undone by its simplistic and monotonous depiction of the elite.

A commentary on the emerging middle class, Kim’s 1960 film was a morality tale with a literal wink in its eye. The basic plot was this: a middle class couple hires a woman to become their housemaid in the midst of fixing up their dream house and raising their two children. The woman turns out to be a disturbed individual who sets out to seduce the husband and destroy their family in any way she can. Im Sang-soo (who also wrote the ‘remake’), discards all of this. It goes without saying that South Korea has changed since 1960; interpreting the premise to make it relevant to their modern day socioeconomic environment was, in theory, the right way to go with this material.

The new synopsis is as follows: Eun-yi (Secret Sunshine’s Jeon Do-yeon) is hired by a very wealthy family as a housemaid for the very young and very pregnant Hae-Ra (Seo Woo) and her husband Joon (Lee Jung-jae). They already have one child named Nami. Eun-yi is awkward, wide-eyed and overwhelmed by the undertaking her job entails. She is hired by ‘Miss Cho’ (Yoon Yeo-jeong), the other housemaid who has been there for decades. One night Hoon seduces Eun-yi, who hesitantly but willfully submits to his lure. ‘Miss Cho’ discovers the pair’s dalliance and even realizes that Eun-yi is pregnant before anybody else (including Eun-yi!). ‘Miss Cho’ tells Hae-ra’s mother (Park Ji-young), who then plots with Hae-ra to get rid of the housemaid whose pregnancy could potentially cause ruin to their family. 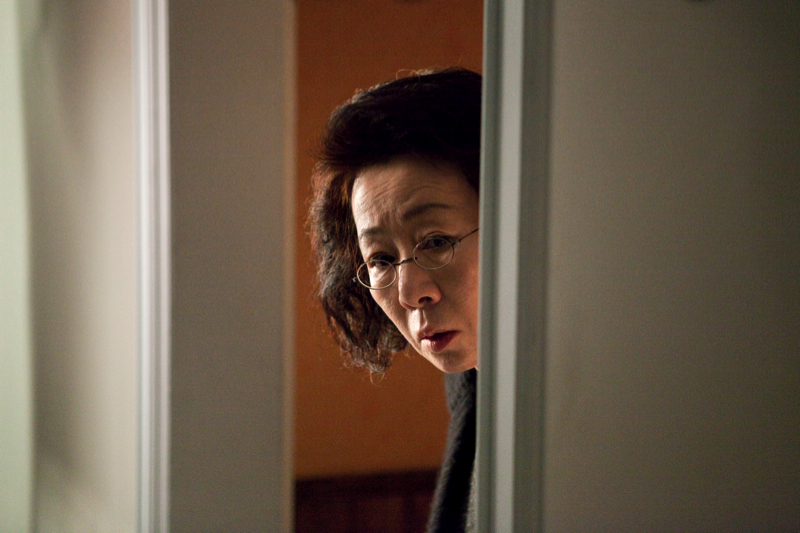 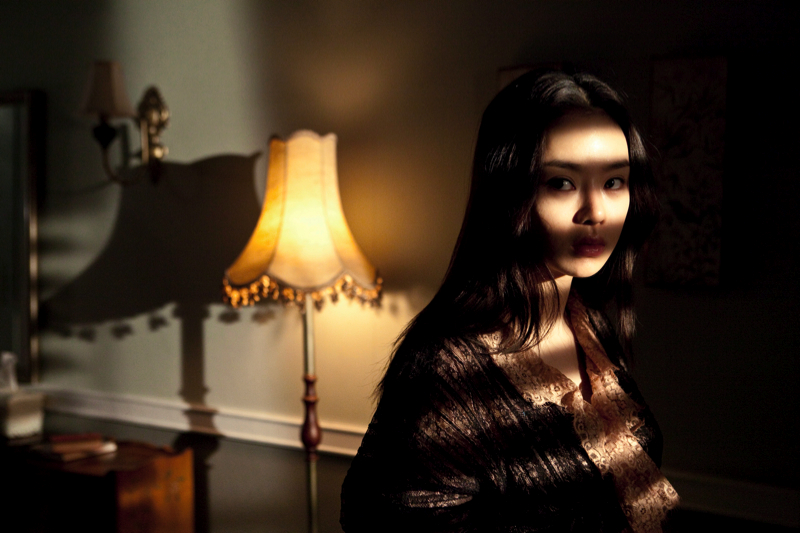 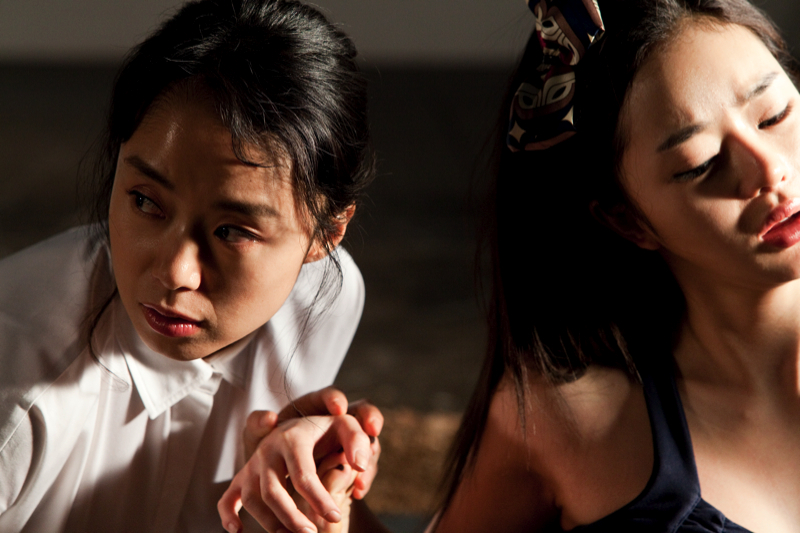 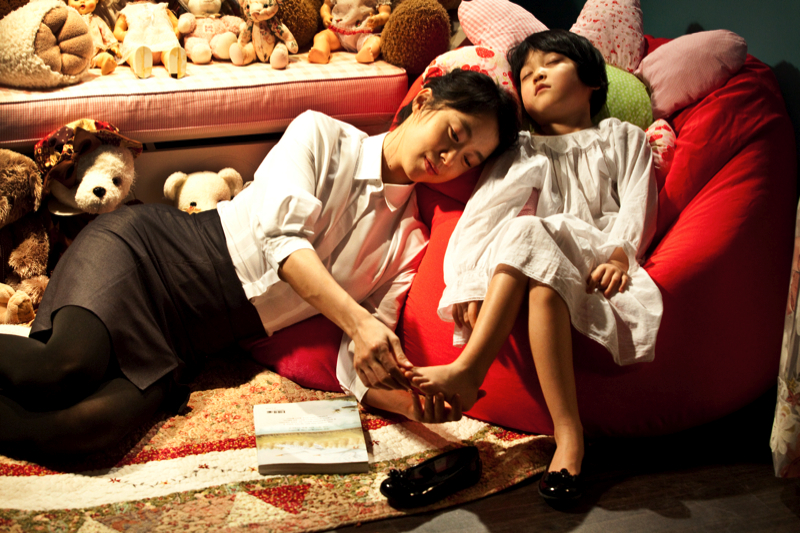 Im Sang-soo, not unknown to controversy with his previous films, decided to take on the elite with his latest. As the writer/director himself has stated, he wanted to address the established upper class that has emerged in South Korea, who are extremely wealthy and yield a considerable amount of power (from the director’s perspective). Eun-yi’s experience with the wealthy represents the circumstances and motivations behind the decisions the elite supposedly make. Everything that Hae-ra, Joon and Hae-ra’s mother do in the film is out of greed, jealousy or an effort to save face. It is certainly meant to be a scathing attack on the deluded morals of the privileged. Unfortunately, Im’s critique is greatly diluted by characters that are one-note caricatures. The Housemaid is filled with characters that fail to be interesting or engaging and whose one-note selfishness comes off makes them seem like the stock villains of a soap opera. Hae-ra repeatedly cries offense from being cheated on with ‘the woman who washes my underwear’. Joon never gets enough screen time to marinate with the audience and is mostly present in sex scenes. The character of Hae-ra’s mother is the hardest to take seriously. From her wardrobe to the performance, it all comes off as hammy and hard to take seriously. In addition to all of this, Eun-yi is not all that absorbing; we feel and care about her but not as much as we should. Jeon Do-yeon does manage to do a lot with the material and puts in a worthy performance. She makes her a victim who actively makes decisions that seem desirable at the time, but ultimately have tragic consequences. Still, a one-dimensional group of wealthy, villainous characters and a sympathetic but only mildly stimulating protagonist does not amount to much, making it difficult to take any deeper meaning about class from the film.

The Housemaid is certainly not bad. It may fall short of its goals but is still entertaining and sexy to boot. There are several specific reasons that The Housemaid is worth seeing. The first is the production design by Han Ah Reum. A 2,300 square-foot set was created for the film, the largest in Korean film history. The effort pays off; the entire house is gorgeous with its sleek design elements and modern grandeur. The cinematography by Lee Hyung-deok ideally compliments the production design with its long shots that incorporate large segments of the space, depicting it as intimidating and shallow, but stunning nonetheless. The most important reason to see The Housemaid is the film’s one multi-dimensional character; ‘Miss Cho’. ‘Miss Cho’ knows more than any other character in the film. She has an arc that begins with her betrayal of Eun-yi and her loyalty to Hae-ra’s mother. She is resentful but loyal to her employees and has hardened by existing through her service to them. ‘Miss Cho’ changes by the film’s end and seeing her navigate through her changing role in the various situations she encounters is by far the most developed material the film has to offer. 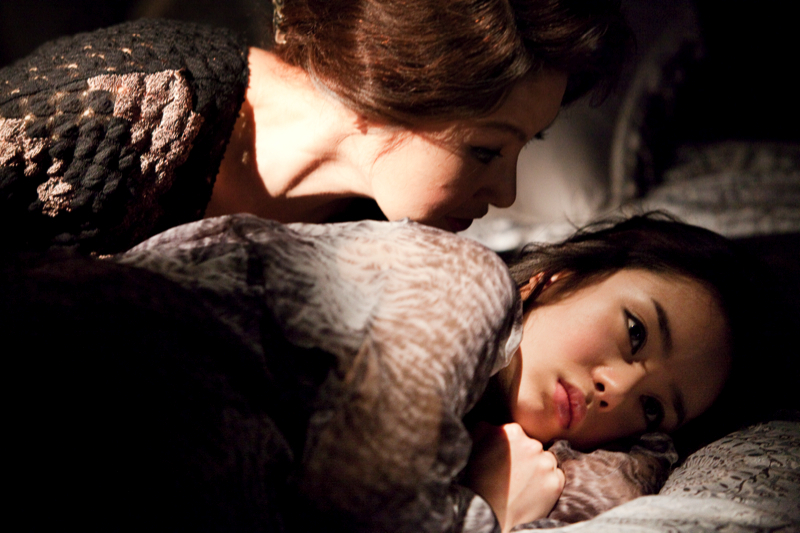 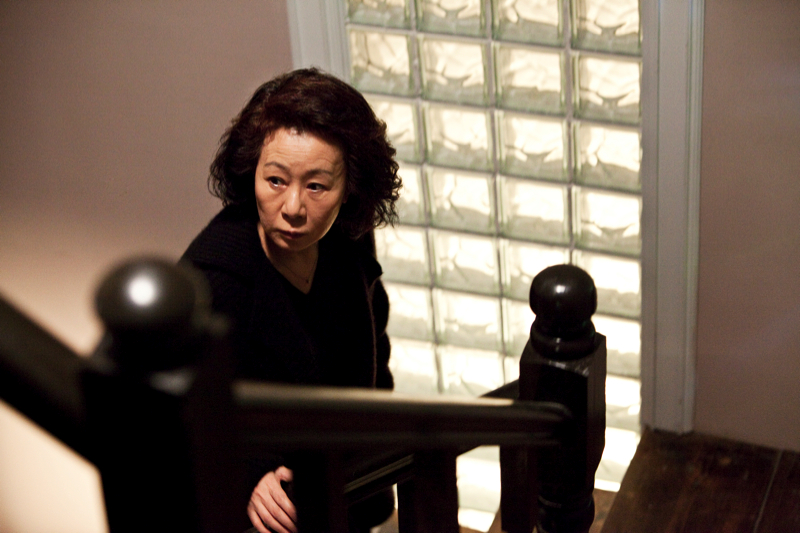 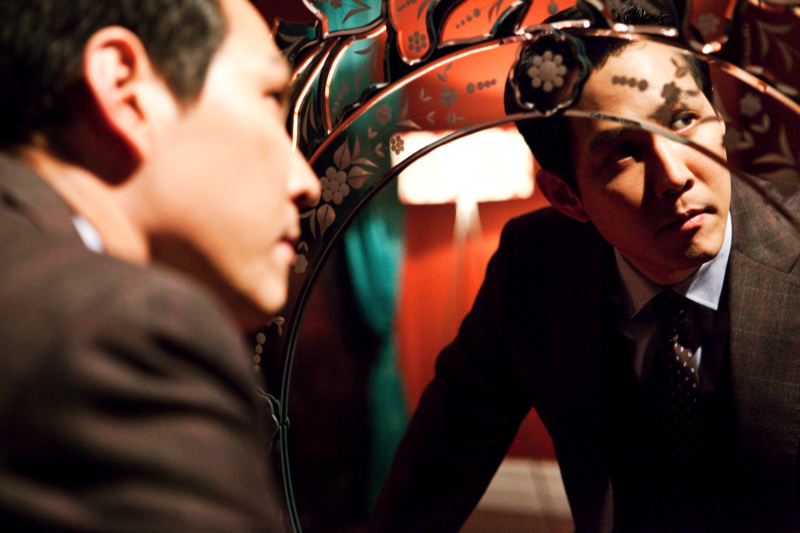 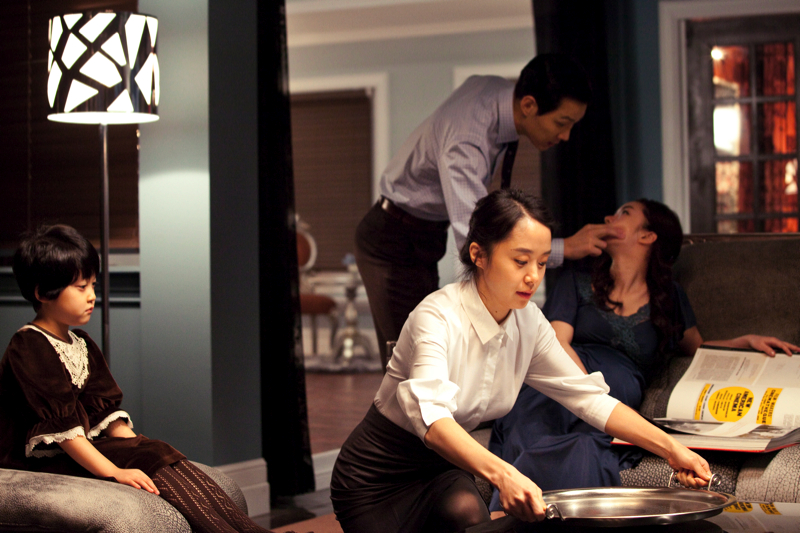 Lastly, The Housemaid is book-ended with scenes that stand out from what takes place in between. The first is the suicide of a random woman in the area where Eun-yi works. It is notable because it foreshadows an event that happens later in the film, it acknowledges the very real suicide problem in South Korea and it starts the film off with a very different tone in relation to what comes after. The scene is shot hand-held and directly contradicts the glossy look of the film once we enter the world of the wealthy. The last scene is also very different in tone and is far and away the best scene in the film. Without giving it away, it captures a moment in such a bizarre way that evokes the very present denial of the people involved, and suggests the ability of one character to see through the transparency of the family’s desperate attempts to pretend that nothing has happened. Cryptic, I know. It is important though to give the scene some context without being spoiler ridden, as it is the highlight of the film.

Im Sang-soo made an inspired choice to reinterpret Kim Ki-young’s The Housemaid for the present day. Starting from scratch allowed him to critique the upper class, and the abuses of power that come with the rich, through the eyes of one unfortunate housemaid. Unfortunately, the attack is flimsy and weakly executed. While it manages to be a fun erotic thriller, most of its characters fail to rise above basic characterization. The subversions and deranged qualities of the original are absent and would have been welcome under new contexts. The Housemaid is worth seeing as it makes for an entertaining and harmless experience but do not expect anything more than a decent film, for you might be disappointed. 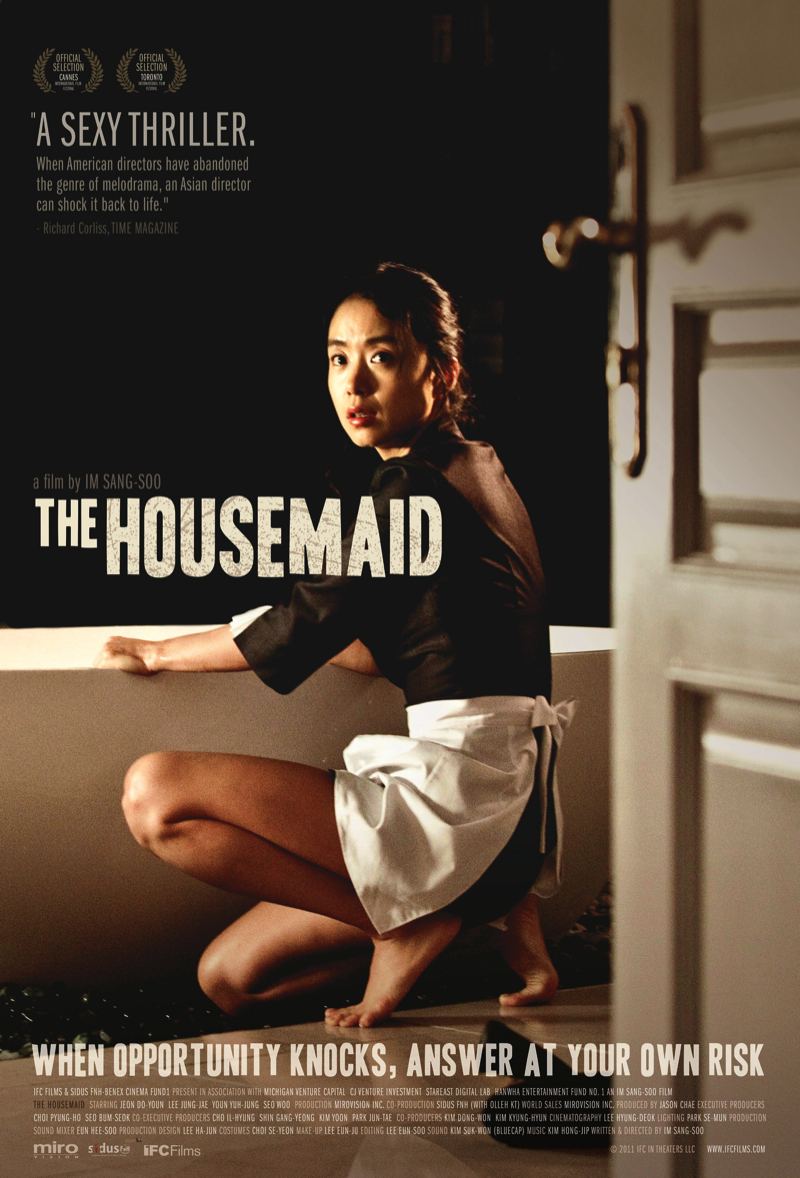