Jean is a construction worker. He is a simple man whose work is a source of quiet pride. He has a wife Anne-Marie (Aure Atika) who works in a factory. They have a young son named Jeremy (Arthur Le Houérou). He is a devoted and content husband and father. Veronique is Jeremy’s teacher and is a caring and sophisticated woman. Jean and Veronique meet, and soon enough she is asking him to replace her window, and he is asking her to play the violin.

They find themselves drawn to each other without either being willing to admit it. It is clear they both feel something, but it is masked by the chores and favors they ask of each other. The turning point comes when Veronique plays Jean a recording of the piece she played for him earlier in the film. They sit on her bed and start to listen. A slow transformation takes place. As the camera stays in long shot and observes, Jean and Veronique slowly let denial and faÃ§ade slip away. They eventually kiss and as they part, alarmed realization crosses both faces as they retreat back into themselves. This scene is done with so much more subtlety and grace then I can describe. It is the film’s most memorable scene and is one of the finest pieces of acting in a film from this or any year. From then on, the majority of Mademoiselle Chambon depicts Jean and Veronique dealing with their own emotions and working through their realizations.

Jean, on the one hand, retreats further into himself. He does not know how or whether to proceed. His connection with Veronique is clearly very strong and inherent. His devotion to his wife and family remains strong as well. How much is he willing to sacrifice and would moving forward with Veronique be ultimately worth it? Further complicating matters, Anne-Marie is pregnant. His stability in middle age is becoming unexpectedly unraveled. Veronique, on the other hand is coping with the vulnerability of her involvement. She has less at stake but the risk she is taking with Jean is just as significant. Her hesitancy turns into anxious regret and waiting. When she learns of Anne-Marie’s pregnancy, she looks like a broken doll. She may not have a family on the line, but the emotional risk is just as strong as Jean’s.

There is so much to observe in the nuanced and carefully controlled acting by Linton and Kiberlaine. They play their characters as down-to-earth and are anchored by the equally sparse direction by Brizé. He uses very little camera movement and executes most scenes in as few shots as possible. Scenes that need more cutting, such as when Jean talks to his son’s class about being a construction worker, appropriately cuts back and forth from the kids to Jean to Veronique. Brizé makes sure nothing else will come between the moments he wants to capture. Almost all of the characterization stems from silence and not dialogue. Jean and Veronique seldom talk about their feelings for each other. They also seldom act on them. This is not a steamy sex-filled affair film. Brizé does not treat the film as an epic romance. It is a simple story of love between two ordinary people who fall for each other at an inconvenient time in their lives.

I was ready to mark Mademoiselle Chambon as lovely and moving but ultimately forgettable and lacking in longevity. Truth is, it stayed with me after it ended. I revisit specific moments, shots and facial expressions in my head. It is impossible not to feel for Jean, Veronique and Anne-Marie especially when all three are acted with such genuineness and delicacy. This is a story we have seen countless times. However, it is the film’s ability to show us what the characters are thinking and not to tell us that makes Mademoiselle Chambon a quietly moving triumph. 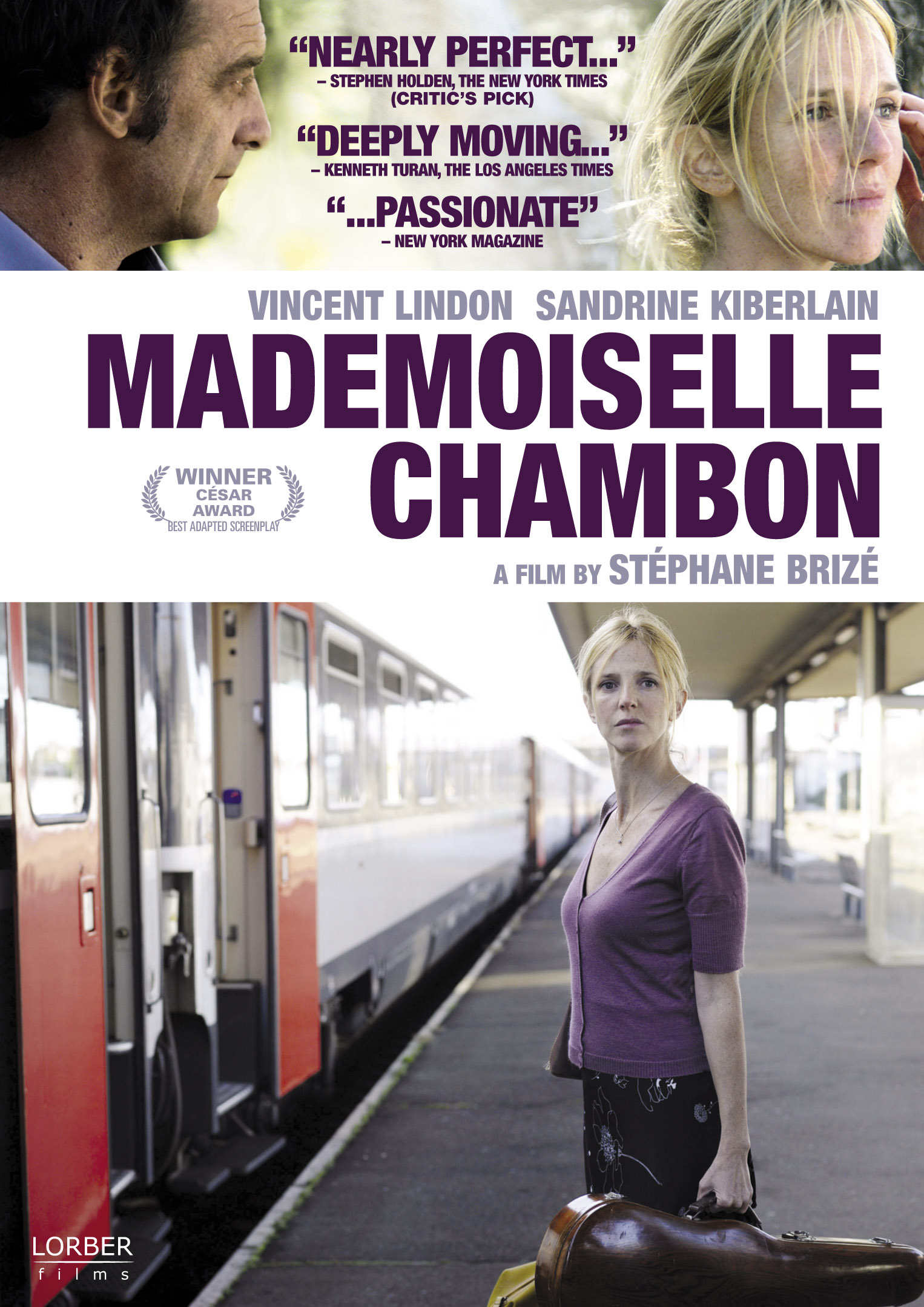 A love story that has bewitched audiences and critics worldwide, Mademoiselle Chambon is an “exquisite chamber piece” (LA Times) that delicately captures the initial stirrings of romance.

Vincent Lindon plays Jean, a burly and happily married housing contractor. One fateful afternoon, he picks up his son (Arthur Le Houérou) from school and meets the teacher, a willowy beauty named Mademoiselle
Chambon (Sandrine Kiberlain). Their flirtation slowly builds over lingering glances and an impromptu violin solo in Chambon’s apartment. Like the classical music they swoon over, their relationship builds through subtle movements: the tilt of a head, or an inadvertent brush of the cheek, fills their hearts with longing. Jean soon comes to a crossroads, having to choose between the intensity of his bond with Chambon or the responsibility and care he feels for his wife (Aure Atika) and child.

A “beautifully observed” (NY Magazine) evocation of what it feels like to fall dizzyingly in love, Mademoiselle Chambon won the Cesar (the French Oscar) for best Adapted Screenplay, and is an unqualified triumph for director Stéphane Brizé.

Catherine has a Bachelor's in Screen Studies and a Master's in Library and Information Science. Her love of cinema goes back as far as she can remember. Idols include Louise Brooks, Leonard Cohen, Isabelle Huppert, Joanna Newsom and Jim Henson.