As much as Criterion seems to love their austere period dramas, their extreme genre pushing pieces, and their black and white French coming of age films, every so often, they release, or in the case of Black Orpheus, re-release a film that takes the collection to a completely different place.

When looking at the collection as a whole, very few releases are as stand out as the 1959 Marcel Camus directed love letter to Brazil and it’s then ever growing art scene, Black Orpheus. Based on the legendary Greek myth of Orpheus and Eurydice, takes the story, and plants it in the heart of a favela in Rio de Janeiro, during the then rarely filmed Carnaval, and follows Orfeo, a trolley conductor and aspiring musician, who is engaged to the lively and utterly breathtaking Mira. However, during Carnaval, after being chased from her home by a mysterious stalker dressed in a skeleton costume, Eurydice comes to his village, and it’s absolutely love at first sight. The story is often compared to Romeo And Juliet, for it is a basic story of star crossed lovers, who must cheat and flea death, literally in Eurydice’s case, to be together.

While the film won the Palme d’Or at the 1959 Cannes Film Festival, the film didn’t hit well with many audiences, particularly in Brazil, who found the portrayal of their beloved home as a constant party, a little offensive. However, while there are problems with the film, it’s not only one of the most interesting releases from the collection, it’s one of the most visually arresting films you’ll see this side of a Powell and Pressburger film.

Black Orpheus, derived from the play, Orfeu da Conceicao (penned by Vinicius de Moraes), is both a revered classic, and a glorified look at what in truth, is a horrible social problem that Brazil still has to this day, the favelas. However, looking at the film as a whole, while the promotion of the areas as seeming to be an upbeat part of Brazil may be poorly off, there is no doubting that this film is an absolute tour de force.

To me, the film completely succeeds when it allows the viewer to get lost in the world, instead of the story. While it isn’t the true look at life in a favela, there is something about the Carnaval atmosphere, and the constant sound of samba and bossa nova music that make this a truly infectious film. The film’s music, penned by Brazilian composer Antonio Carlos Jobim, is a masterpiece of the genre, and still to this day, will get even the tensest and uninterested viewer’s toes tapping.

Take that, in combination with the film’s lush photography, and you have a must see on your hand. The cinematography from jean Bourgoin here, is so colorful and full of life, that it’s almost like seeing a piece of cinematic pop art. The film completely pops off of the screen here, and features photography that is equal parts alive and bright, as well as haunting, particularly near and during the film’s ultimate climax. It may not be as jarring as a film like The Red Shoes, but each frame here is no less colorful and no less vibrant than anything that could have called it a cinematic competitor.

However, the film doesn’t get away without its fair share of flaws.

Personally, it’s hard to really get behind these performances. No one is necessarily bad here, particularly Lourdes de Oliveira, who portrays Mira, who is one of the most viscerally stunning beauties this side of Anna Karina in A Woman Is A Woman. She has that kind of charisma and beauty that she is completely and utterly watchable, even when doing nothing that standing there, talking to Orfeu, played by Bruno Mello. Mello here isn’t bad either, but it’s a performance that doesn’t offer the viewer much too really chew on. It may be a fault of the story, which is your basic Romeo And Juliet style tale of star crossed lovers, but while he shines for moments, there are others where he doesn’t have all that much to do. Same goes for the rather wasted Marpessa Dawn, who plays Euridice.

Also, the film does tend to miss out on truly displaying the true tone of the favelas during the time. As seen in films like City Of God, these areas aren’t the complete parties that they are made out to be here, and while that could very well be a problem with the time Marcel Camus decided to portray here, given a much darker tone, the film could have done something far more interesting.

That said, I don’t know if it would truly make the film better.

Personally, the film’s biggest star is its atmosphere. When the film delves into the true mood and world of Carnaval, I truly can’t take my eyes off the film. Everything about this film, from its narrative tone, to its infectious score, completely screams the upbeat and cartoonishly colorful world that Carnaval encompasses. During the time period the film was released, the film landscape was blasted in the face by the gut punch that was the French New Wave, and while films like Breathless and The 400 Blows are vastly superior films, this is a definite breath of fresh air, especially for a collection that makes its bread and butter in releases of films like the aforementioned French classics. Even in the face of a few rather jarring problems, primarily the horribly romantic look at a nation that was far from it, this is a release that is worth your time.

And I haven’t even gotten to the special features yet.

The new release is a two disc set, and while the outside packaging and inside artwork are breathtaking themselves, it is what is on the discs that truly makes this release a must own.

The biggest star of the release, to me, isn’t the feature length documentary, Finding Black Orpheus (but I’ll get to that in a second), it’s the shorter essay on the film, Revisiting Black Orpheus. The piece features an interview with Brazilian film scholar Robert Stam, who offers a really interesting take on the film, from a distinctly cultural, and rather negative, light. It’s a 13 minute piece of footage, but it’s absolutely superb, and being a rather disproving take on the film, is an interesting addition to the release. You learn that the film’s distinct emphasis on blackness and being black, actually stems back to the film’s title, which outside of Brazil, where it was known as Orpheu de Carnival, emphasized the black aspect of the story. It’s a interesting little look at the film, and for those who haven’t seen it, will offer a rather distinct take on the film, after your viewing of it.

There is also a massively expansive feature length documentary looking at everything from the film’s creation, to its impact on things like music and film in Brazil, as well as two interviews, one with director Marcel Camus and one with star Marpessa Dawn, that while short, do offer an interesting look into the making of the film. Finally, the more interesting documentary of the bunch, Black Orpheus and That Bossa Nova Sound features a fantastic look into the creation of the film’s score as well as its influence on bossa nova music, as guided by jazz historian Gary Giddins and author Ruy Castro. These special features truly add an immense level of depth to the film, making this a release that you cannot miss.

Personally, while the film does indeed have its short comings, particularly its rather primitive and romantic look at the slums of Brazil, the soul and heart that this film wears on its sleeve is more than enough to make this release a must own. For a two disc collection the film may not have the number of special features one would expect, but what it does have are some of the most interesting documentaries and essays that you’ll see.

Also, who can go wrong with that beautiful cover? It’s worth $30 for that alone.

Just buy this thing. You’ll live a better life for it. 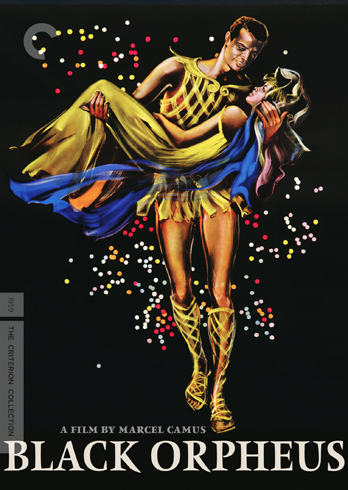 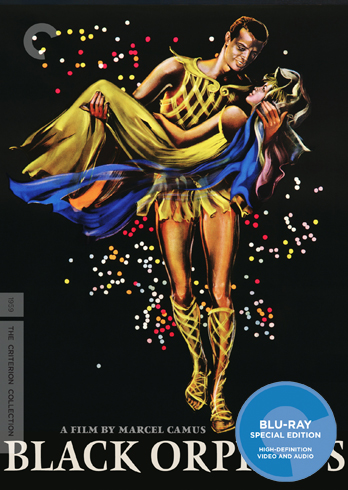 Winner of both the Academy Award for best foreign-language film and the Cannes Film Festival’s Palme d’Or, Marcel Camus’ Black Orpheus (Orfeu negro) brings the ancient Greek myth of Orpheus and Eurydice to the twentieth-century madness of Carnival in Rio de Janeiro. With its eye-popping photography and ravishing, epochal soundtrack, Black Orpheus was an international cultural event, and it kicked off the bossa nova craze that set hi-fis across America spinning.