Released on DVD and Blu-Ray just a week before May 1, the International Workers holiday celebrated globally for over 100 years, The Organizer capably serves as the Criterion Collection’s latest contribution to the ongoing dialectic between those who speak on behalf of the working class and the owners and managers who control the means of production. Criterion’s advocacy on behalf of labor unions and the plight of the proletariat has an impressive lineage, including documentary films like Harlan County USA, Native Land, Salesman and Humain, Trop Humaine. Add to that list such fictionalized narrative gems like Thieves Highway, Modern Times, Man Is Not a Bird, La Bete Humaine, The Threepenny Opera, Days of Heaven, Il Posto… and there are others I could mention, including another recent release, ¡Alambrista!, which I have yet to see. But you get the point: despite their niche marketing and pricey boutique reputation, Criterion clearly and proudly sides with the oppressed masses in their struggle to achieve some degree of equity in the social order. (And let’s give them credit where it’s due, since this is part of Criterion’s ever-expanding line of discount-priced titles, a nearly barebones presentation that I personally find quite sufficient for the film at hand.)

Despite more than 150 years of collective efforts by Marxists, union activists and other reformers to alleviate social injustice, the laboring people of the world still too often find themselves exploited by unchecked capitalist greed and divided amongst themselves as to how they can most effectively stand up for their interests. Last year’s phenomenal eruption of Occupy demonstrations in various financial and commercial centers of North America and elsewhere was just the latest manifestation of this on-going resistance. The Organizer can provide a valuable history lesson to today’s young protesters, who might be inclined to take for granted such achievements as the eight-hour work day, the five-day work week, regulated safety standards and other results gained through decades of abject suffering and hard-fought collective bargaining.

Set in northern Italy toward the end of the  19th century, The Organizer depicts a society in transition, as hordes of largely illiterate laborers find themselves in a near-desperate state of dependence on the meager provisions offered by local factories. In exchange for 14 hours of toil in brutal conditions on machines capable of tearing limbs and fingers off in a blink, the workers earn a bare sustenance, with no real hope for advancement or relief from their burdens, regardless of how well they perform their task. The structures of the economic system stack the odds against them. With unemployed mobs ready to migrate to whatever factory they hear is hiring, those fortunate enough to have a job are easily intimidated to silence in order to avoid being made an example of how trouble-makers get dealt with by their bosses. Their lack of education, and the petty squabbles and rivalries that naturally break out in such deprived conditions, cripple their ability to respond proactively to the abuses they suffered. Establishing a common set of values that would inspire the courage and commitment the workers needed to face these challenges is not an easy task. And to director/screenwriter Mario Monicelli’s credit, he does not offer overly winsome or simplistic solutions to the problem.

Whereas a more conventional Hollywood-style take on the workers’ dilemma would focus the attention on a charismatic hero figure (think Norma Rae or Hoffa), Monicelli understands that the real power of these movements, along with their inevitable fragility, rests squarely on the shoulders of the people en masse. So despite the American title given to this film, which emphasizes the role of a single leader, I Compagni (The Comrades) more accurately reflects its status as an ensemble piece. Of course, Marcello Mastroianni supplies ample magnetism in his role as Professor Sinigaglia, the catalyst who gets the workers pulling in the same direction. But it’s not a design error that led to his backward-facing stance on the cover art (he does get name-checked though; no use letting his star power go completely to waste when it comes to the marketing, after all.) Sinigaglia is just a passer-by who understands his mission to promote labor solidarity in those brief moments of clarity when he has time to block out the problems from his past and his present carnal distractions. He’s a flawed and conflicted leader who’s at his best when overcome by sheer inspiration to find the right words to address his followers, just at the point that all the collective effort stands on the verge of falling apart. But despite the critical role he plays, he’s not the one with roots that run deep in this community, nor is he the one who will have to fear retaliation upon a humbling return to the production lines after some grudging concession has been pried from the grips of the factory owner and his managers.

The faces we see on that cover, the men, women and children, each worn down and close to being swallowed up by the forces of commercial enterprise, belong to those who will remain at the mill, who will remember the lessons learned from The Organizer, and pass them along to future co-workers and descendants as they continue their multi-generational quest for humane working conditions and a rightful share of the profits. In that process, they’ll suffer more setbacks, endure further discouragements, and have to fight even harder just to preserve what they thought had already been gained. Monicelli, one of a generation of directors who’d lived through Italy’s wartime devastation and reconstruction, knew his history and understood these lessons at gut level. According to his own description of his work, Monicelli specialized in making films about people who took on projects too big for them to succeed. Such is the case for Big Deal on Madonna Street, a hilarious send-up of grim, stone-faced heist films like Rififi, in which a gang of burglars dream up the caper to end all capers, only to botch the job badly, and to great comedic effect. While The Organizer also offers a steady stream of humorous asides, and was originally billed as a comedy, it doesn’t fit too well with contemporary understandings of the genre. Or at least, that was my first impression – I was probably too moved by empathy just looking at the rough circumstances, the starvation and squalor of it all, to let the dark, world-weary cynicism provoke many chuckles. That, and also quite entranced by the gorgeous monochrome textures of the hard-scrabble cityscape, fog-shrouded trainyards and steam-belching intricacies of the massive factory itself, all shot with extraordinary clarity by Giuseppe Rotunno, here just off his work on The Leopard with Luchino Visconti.)

My hunch is that future rewatches will enhance my appreciation of the earthy wit shown by Raoul, Pautasso, Adele and the rest of the crew who press on through the fatigue and futility with resilient perserverance. The Organizer is the kind of film that makes me feel thankful for the legacy passed down by our laboring forebears, but also more than a bit embarrassed by how soft and complacent our society has become as we see workers rights rolled back and portrayed as wasteful or illegitimate by those on the political right in this country, and altogether ignored in foreign sweatshops by corporations who sell us the cheap goods we so eagerly devour without asking where they came from, or what suffering was endured by those who did the hard work. Of course, turning to (until recently) an all-but-forgotten, low-key but well-crafted Italian historical drama for answers to those questions is asking way too much from this or any other movie. But the awareness it can raise, and the inspiration it can spark to get involved, take action and stay committed, make The Organizer a film worth aligning with, and revisiting on future May Days to come.

Check out Caitlin Kuhwald’s process for the cover art 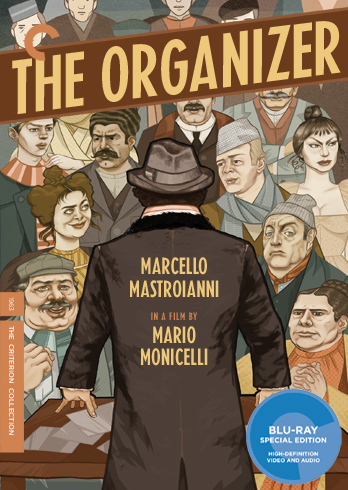 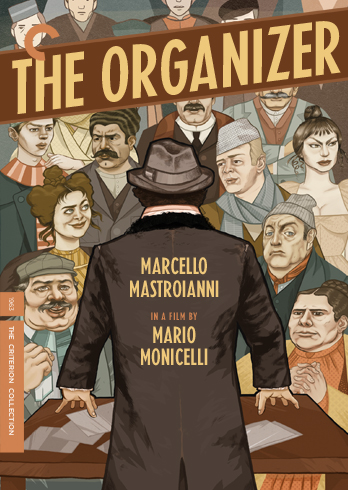