With the recent announcement of the February 2011 Criterion Collection titles made this past Monday, it is time to start looking deeper into the rest of next year.

While searching through the Criterion Forum, and Blu-ray.com’s forum, I came across someone who had noticed that Deluxe Digital in the UK created a little slideshow widget on their site, showing off some of the Grading and Restorations that they have done for various companies. Buried within several Criterion titles that have already been announced and released, as well as a couple of Eclipse titles, there are three films that we haven’t had any official word on so far. So of course I thought it would be a crime if I didn’t share them with you.

These haven’t been confirmed by Criterion, so for now we’ll just have to file them in the extremely likely, but still not official category of future releases. These are clearly much more likely than my prediction that we’ll see a new DVD and Blu-ray of Tokyo Story (although that one is credible).

Here is what they have listed for “Criterion”:

From that list we have three titles that I want to highlight, which haven’t been released previously on DVD or Blu-ray in the Collection: The Jungle Book, The Scarlet Pimpernel, and The Canterbury Tales. 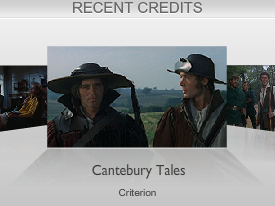 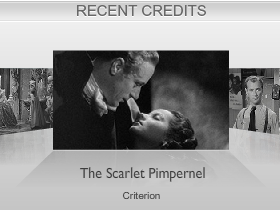 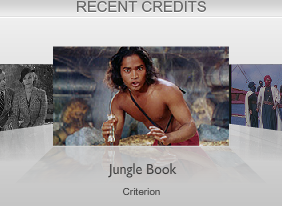 First up we have a title that was touched on briefly on our latest episode with Jett Loe from the Film Talk, in our discussion of The Thief Of Bagdad. We mentioned that the actor, Sabu, was previously in another film from Alexander Korda, an earlier adaptation of The Jungle Book. Now this is a movie I can remember watching on VHS at my grandparent’s house on many occasions, as it was one of the only films they owned, and kept for the grandkids to watch. The Disney version was also one that I grew up seeing in its re-released state in theaters over and over. Based on the tiny screen grab on the Deluxe page, the transfer looks on par with their work on the Thief Of Bagdad. You can currently watch the film for free over at the Internet Archive (since the film is now a part of the public domain), but I’d recommend not damaging your eyes with the poor quality. It should also be noted that the Thief Of Bagdad is in the line-up of images, so I’m hoping that a Blu-ray is in the cards for 2011 as well.

Next up is another classic, currently available for free online as it is also in the public domain: Harold Young’s the Scarlet Pimpernel. I’ve seen various adaptations of this story throughout high school, but have not seen this version, which many apparently regard as the best. I was hesitant to embed any of the footage available on YouTube, as the quality is almost unwatchable. Based on what I’ve read about the film, and the poor quality of the footage online, I cannot wait to see this restored print of the film.

Finally, the last of the new Criterion titles is Pier Paolo Pasolini’s The Canterbury Tales. This is the second film in Pasolini’s “Trilogy of Life” series (the others being The Decameron and A Thousand And One Nights). This version of the Canterbury Tales was released on Blu-ray earlier this year in the UK by the BFI, and you can find screen captures over at DVDBeaver and Blu-ray.com. I didn’t end up putting a trailer for this film in the post, but you can find all sorts of clips on YouTube (including one of the Doctor, Tom Baker, getting what I’m assuming is a handjob)