According to DVD Outsider, Jacques Tati’s Les Vacances de Monsieur Hulot and Playtime will be getting brand new, Dual Format Editions in the UK, giving the viewer both DVD and Blu-ray discs, come this November 29.

Les Vacances, also known as Monsieur Hulot’s Holiday, will come equipt with a fully restored version of Tati’s 1978 cut, as well as an ‘alternative’ international soundtrack, the original trailer, an interview with Richard Lester and historian Philip Kemp, and a booklet with an essay by Kemp.

Playtime will be getting a bit broader of a release, including the new soundtrack, an interview with Tati from 1968 (audio only), a trailer, a documentary entitled Eu-dela de Playtime, a biographical short on Tati, and a documentary looking at Continuity Supervisor Sylvette Baudrot as she works on the flm. 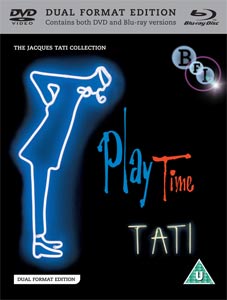 Regarded by many as Jacques Tati’s masterpiece, Playtime is a surreal, comic vision of modern life in which the director’s much-loved character, Monsieur Hulot – accompanied by a cast of tourists and well-heeled Parisians – turns unintentional anarchist when set loose in an unrecognisable Paris of steel skyscrapers, chrome-plated shopping malls and futuristic night spots. 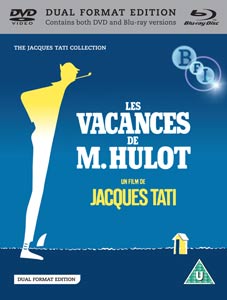 The film that brought Jacques Tati international acclaim also launched his on-screen alter ego: the courteous, well-meaning, eternally accident-prone Monsieur Hulot, with whom Tati would from now on be inseparably associated. Les Vacances du Monsieur Hulot is set in a sleepy French coastal resort which is seasonally disrupted by holiday-makers in energetic pursuit of fun. At the centre of the chaos is the eccentric Hulot, struggling at all times to maintain appearances, but somehow entirely divorced from his immediate surroundings. Tati’s beautifully orchestrated comic ‘ballet’ is a seamless succession of gently mocking studies of human absurdity.