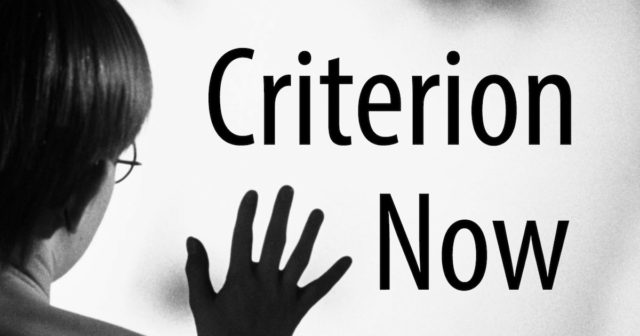 Criterion Now launched in January of 2017 as an Aaron West side project from Criterion Close-Up, which Aaron West hosted with Mark Hurne. In the years that passed, the show has grown in popularity and has attracted a strong variety of guests. There have been occasional celebrities such as actors, film directors, and also notable critics, academics, but mostly the show has succeeded because of the knowledgeable cinephiles that bring their passion and energy to the show.

Jill Blake made her first appearance with Fritzi Kramer from Movies Silently in 2018. This was a pivotal episode as we processed the announcement that FilmStruck was going to be canceled. In the years since, she has guested on three other episodes including two in 2021. She also appeared on an episode of Criterion Close-Up to discuss Hitchcock’s Notorious. All episodes were excellent and received many compliments.

What was key in Jill’s guest appearances in 2021 is that she and Aaron have genuine chemistry. Through this friendship, there is a comfort level and they derive energy from each other. The primary compliment has been about the rapport. Additionally, they are both cinephiles but have different areas of expertise. Of course they both have a wide range of film tastes, however Aaron is more focused on classic foreign film whereas Jill is an expert on Classic Hollywood.

The timing worked out, and Jill is joining Aaron as a co-lead of Criterion Now. They are both excited about this partnership and have great plans for the show. There will continue to be reactions to announcements, discussion of the current and upcoming releases, and they will continue to explore rumors about Criterion. Additionally there will be more special guests including film directors, academics, authors, critics, and more. There are also plans to explore specific themes or even titles from the Collection.

Jill has worked with TCM, FilmStruck, and Netflix Film. She’s also participated in many of her own creative projects such as The Retro Set and the Drinking While Talking podcast. Jill is also a founding member of the Classic Film Collective, a group of talented women sharing original classic Hollywood-inspired writing, artwork, and music in a creative and affirming patron-supported space. She is prolific on Twitter at @biscuitkitten.

Both Jill and Aaron are active in the Criterion Now Facebook group. Please join if you would like to participate in the discussion.