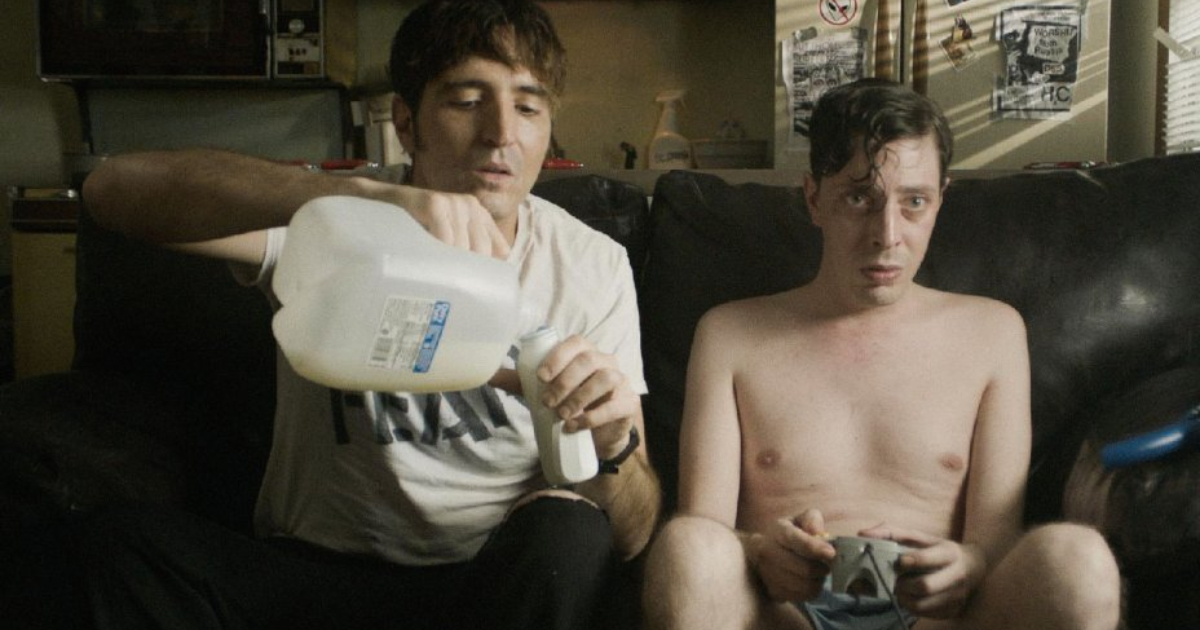 Looking at the logline for Joel Potrykus’ Relaxer is like reading a grotesque nightmare. Set against the backdrop of Y2K, the film introduces us to Abbie (Joshua Burge), a young man caught in an existential crisis. The film opens with Abbie stuck in the middle of a “challenge” made by his older brother Cam (David Dastmalchian), which upon its unsuccessful conclusion, forces him to raise the stakes. Abbie is challenged to beat, without ever leaving his couch, Billy Mitchell’s legendary Pac-Man high score. That’s right, he can’t leave the couch, ever.

An exciting, singular voice in American independent cinema, Potrykus returns with this film, likely his best work yet. As grotesque and unsettling as his previous films, this feels in step with his sophomore effort Buzzard, itself a polarizing look at a slacker on the edge of society. While much more surreal and absurd than that aimless mess of a film, Relaxer sees his vision come into complete focus. Clocking in at right around 100 minutes, the film is a slow burn thriller that feels like the bastard, 8-bit son of Bunuel’s Exterminating Angel, a film that sees the oncoming turn of the century as an existential cataclysm.

Set within one room, the film has no reason being as compelling as it ends up being. Potrykus’ camera is static, yet with a surreal sense of place and a sedentary but deeply physical performance from Burge makes this a confounding picture. Each nook and cranny of the room holding our lead captive feels at once tactile and yet not of this world, lived in yet absurdly designed. Setting also plays into the film’s narrative structure. Quite episodic in nature, Relaxer owes a debt to its use of outsiders and their encountering our lead character. Throughout the film Abbie is accosted by various friends and foes, ranging from a buddy helping (or not, actually) Abbie stay hydrated with his favorite cola to a cleaning crew trying to tidy up the disgusting apartment in what is the film’s most inspired sequence. These little vignettes allow Relaxer to continue pushing forward, until the walls of reality come crumbling down in a finale that’s maybe Potrykus’ crowning achievement.

Yet the real crowning achievement here is Burge’s lead performance. Best known for his work in Potrykus’ Buzzard, Burge is utterly brilliant here as the director’s latest petulant slacker. A film about technological captivity as existential crisis, Relaxer rests entirely on Burge’s shoulders, which he’s more than capable of carrying. Despite being stuck in the same position for more or less the film’s entirety, he proves to be an incredibly physical performer, with a face made for an era of cinema now a century in the past. Potrykus throws everything and the kitchen sink at his muse, and while one could argue that he finds disdain for him proven by the sheer amount of abuse he takes, Abbie consistently has agency and is always just a “no” away from ending this misery. It’s a genuinely superb rumination on a specific type of masculinity that makes Relaxer feel as much about technological dread as it does petty dick measuring. Brings to mind a film like Chevalier, just transplanted to one room at the end of the world. A nutty little film.