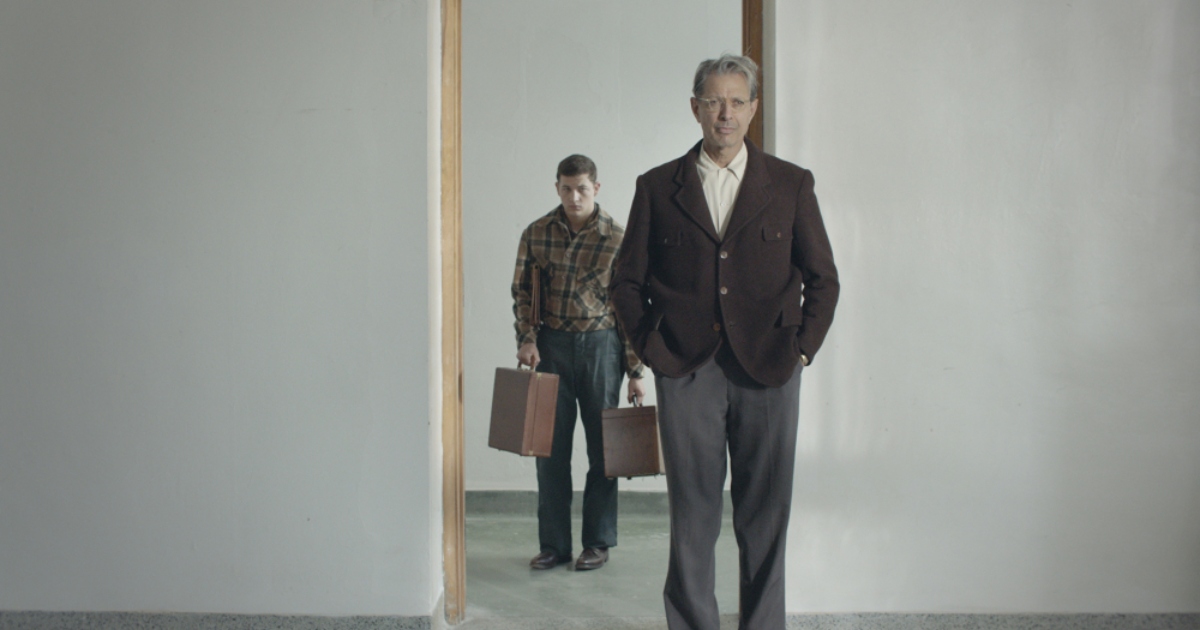 For the better part of the last ten years, director Rick Alverson has been the artist behind some of the very best films to theaters. Be it his early, incredibly intimate dramas like the Kelly Reichardt-influenced The Builder and New Jerusalem, or his recent dyptic of satirical ruminations on toxic masculinity in The Comedy and Entertainment, the upcoming troves and troves of “Best Of The Decade” lists that outlets will be writing and Letterboxd users will be posting should be filled with these superlative films.

And that’s not even counting his best film, which finally hits theaters July 26.

Entitled The Mountain, the film stars Tye Sheridan as Andy, a young man from a troubled home. With his mother in a sanitarium, Andy lives with his zamboni-driving, figure skating teacher father until, after his passing, a family acquaintance arrives and changes his life forever. Dr. Wallace Fiennes (Jeff Goldblum in a brilliant, strangely reserved performance) is a doctor of sorts, traveling around the country as a freelance administer of an allegedly ground-breaking lobotomy procedure that, as its done more and more, leaves more and more people asking if the low success rate is actually worth the trouble. As questions arise and the doctor’s life begins to sink, Andy begins to get closer to some of the patients he encounters, until arriving in California and encountering a mysterious Frenchman who wishes to have his daughter lobotomized, with Andy becoming close with the beautiful, stoic woman.

Despite ostensibly being a period piece, The Mountain feels right at home in the broader filmography of one Rick Alverson. As seen throughout his career, both masculinity and Americana have been primary focuses for the director, and here they’re both of keen focus. Like his previous film, the depraved Entertainment, Alverson doesn’t simply make Andy a passive character, but one who in his silent watching becomes a proxy for the viewer on a journey through, and into the heart of, America. The period design work is breathtaking, feeling tactile and lived in, yet strangely surreal due to the washed-out, vaguely jaundiced photography from Lorenzo Hagerman (Entertainment). Stylistically, the film more resembles the men and women Andy takes photos of while on this journey, beautiful yet washed of any perceived humanity.

Male-female relationships and gender dynamics are also on the film’s mind. Throughout the trip with Dr. Fiennes, Andy is privy to the doctor’s charm, a charm that’s used to drunkenly seduce women across the country and make others feel more comfortable as he strips them of their humanity on his surgical table. As Andy meets more and more of these women he encounters Susan (played brilliantly by Hannah Goss), a woman he becomes smitten with but for reasons he’s unsure of. Does he simply miss his mother? Or is this the “love” that he’s previously never truly known. The relationship between doctor and patient here is one of female subjugation, and while that theme’s not as front-facing as others, for those looking to see Alverson continue his skewering of male identity, you won’t need to look very far or very deep.

Speaking of Andy, this performance is one of much intrigue. Tye Sheridan has seen his carry vary, first garnering attention for his career-making turn in Terence Malick’s Tree of Life only to become the star of a Steven Speilberg action film. However, there’s a quiet rage behind his eyes that’s never truly been tapped until this film. A startlingly quiet performance, Sheridan is a revelation here, taking on the role of a cipher of sorts, and elevating it with a sense of detachment from his surroundings that feels both fitting of his character specifically and fitting of the film’s themes more abstractly.

Everyone will turn to the Goldblum performance first, simply being that of a massive star, but it’s this performance that truly holds the film together. Goldblum is quite good here, seeing the same charm he’s shown throughout his career, just playing it a few octaves lower and surrounded by a film that strips it of its humanity. It’s a shockingly dark performance, one that sees Goldblum flex his chops in a way we haven’t seen in some time. Gross is incredible, but not given all that much, and the back half or so of the film is absolutely stolen by a bizarre, yet utterly captivating, performance from Denis Lavant as Susan’s father, a French mystic. An otherwise incredibly quiet film, Lavant’s performance feels almost assaultive, both physically and linguistically, playing into much of the same thematic work as earlier in the film just in a manner much more chaotic and kinetic. It’s a sight to behold, but one that definitely feels jarring when taken in the greater whole. Thankfully Alverson’s direction is so strong, so focused, that the film never takes much of a hit and remains one of the very best yet in 2019.