In about 10 minutes, the Warner Archive will test out a new option: streaming an entire film for free on their website. Starting at 12am, until Midnight on Monday, they’ll allow you to watch the Ronald Reagan film, Secret Service Of The Air. The film is the first in their recent 2 disc release: “Brass Bancroft Of The Secret Service Mysteries Collection.” From TCM’s website:

The initial entry in what would become a four-picture series, Secret Service of the Air (1939) was by no means either one of the studio’s major releases or much of an opportunity for the young actor to show off whatever skills he had beyond his reputation for being likable and highly cooperative. The script was loosely based on the memoirs of the former chief of the Secret Service, William H. Moran, recently purchased by Warners. “Loosely” is the operative word: “I’m sure the Secret Service wasn’t exciting enough for Brynie, and he threw away everything but the title,” Reagan noted. What they ended up with was the story of former Army Air Corps Lieutenant “Brass” Bancroft, who leaves his job as a commercial pilot to go to work for the Secret Service. His first assignment is to stop a smuggling ring bringing illegal aliens into the U.S. by air’“’“and callously dumping their doomed human cargo through a trap door in the plane whenever the operation is threatened with being busted by the feds.

“I became the Errol Flynn of the Bs,” Reagan said. “I was as brave as Errol but in a low-budget fashion.” Actually, the production was handed a few more resources than many B pictures (including good aerial cinematography), although not enough to cover the cost of stuntmen for everyone involved in its action sequences. Because Reagan was skillfully athletic (and always willing and eager to do whatever he was told), he performed his own stunts and only the villains were doubled. The climactic fight scene aboard the swiftly plunging smuggler’s airplane was shot mostly over the villain stuntman’s shoulder to show Reagan in full action. During the shooting, the star was directed to make his punches more realistic, and he complied to the point of actually connecting one so perfectly on his adversary’s jaw that he knocked the stunt performer out cold. The next day, a different fighter was assigned to the scene. It turned out to be the first stuntman’s friend and roommate, and Reagan walked away with a black eye.

Secret Service of the Air proved to be enough of a hit to warrant continuing the series for three more films over the next 15 months. In each of them, Reagan was given a comic sidekick, played by the producer’s younger brother Eddie Foy, Jr., who over the next couple of decades would portray his famous father several times, including an appearance in the Warner Brothers George M. Cohan bio-pic Yankee Doodle Dandy (1942), starring James Cagney. Secret Service of the Air also featured actress Ila Rhodes in one of the three pictures she made with Reagan during her one-year, five-picture movie career. Rhodes later claimed to have been engaged briefly to the actor before his 1940 marriage to Wyman, but this has been disputed by others who worked at the studio during this time. What is certain is that she was one of several starlets Reagan dated during this period of his film career.

I really hope that the Warner Archive will begin streaming more of their films for free, to give people a taste of what it is that makes these films so special. While you can currently buy digital versions of their films, very few are available on Netflix Watch Instantly. If you’re interested in seeing more of this type of thing, hit them up on Twitter, leave a message on their Facebook Wall, or just buy more of their films.

This latest 2-disc, 4-film set of Ronald Reagan films is actually really interesting, and I’m surprised that this is just now getting a DVD release, given the popularity of Reagan as a political figure. I can honestly say that before this set arrived, I had known of Reagan “the actor” but hadn’t seen any of his films.

On our latest Disc 2 that we recorded with Moises Chiullan, which will be going up later this week, he described these films as if “Captain America made a movie,” and I think he’s pretty spot on.

Check out the video clip below, provided by the folks at WB, and click the image below to head over to their store to purchase the film.

What do you think of this promotion? What films would you like to see the Warner Archive stream free next? Leave your thoughts in the comments below. 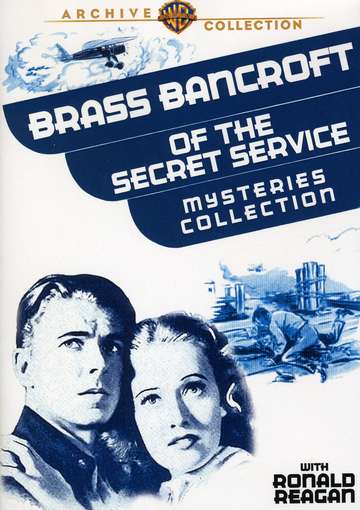 The Secret Service risked life and limb for Ronald Reagan when he served as the 40th President of the United States. Coincidentally, in his first job, as an actor, Reagan played a stalwart Secret Service agent in pursuit of justice in 1939’s SECRET SERVICE OF THE AIR. This Sunday, February 6, on what would have been Reagan’s 100th birthday, the Warner Archive Collection (WAC) offers a special 2-day complimentary streaming of the movie. The stream will be live only from 12:00 a.m. on February 6 through Monday, February 7 at 11:59 p.m. Available only to US residents on PC and Mac ® computers with Adobe Flash Player 10 or higher (no other devices supported) at this link.

One of four fast-paced B-movies in which Reagan plays Lt. ‘Brass’ Bancroft, SECRET SERVICE is part of a WAC Mysteries collection that also includes CODE OF THE SECRET SERVICE, SMASHING THE MONEY RING and MURDER IN THE AIR The Warner Archive Collection is also honoring with titles (listed below) that audiences might like to re-discover ‘“ titles that Reagan made with Warner Bros., the studio where he was under contract from the beginning of his screen career in 1937 until 1952. The first two movies of those listed below have previously been unavailable. The reveal a range that more than makes the case for a re-assessment of “Dutch’s” pre-political career.

STALLION ROAD (1947) This sentimental romantic drama for the horse-loving set was one of Ronald Reagan’s favorite pictures. Reagan plays veterinarian Larry Hanrahan, an expert horse doc, who finds himself competing for the affections of a fellow equine aficionado (AlexisSmith)with his pal, a writer from the big city (played by Randolph Scott).

NIGHT UNTO NIGHT (1949) Ronald Reagan stars as a stricken scientist in this metaphysical melodrama alongside the enchanting Viveca Lindfors. Diagnosed with epilepsy, biochemist John Galen (Reagan) moves to the Everglades in Florida to work in shame and isolation. He moves into a house owned by a widow (Lindfors) who is haunted by the voice of her dead husband. Together, they are forced to confront the mysteries of faith and fate. Directed by Don Siegel.