There are many things one could say about the Criterion Collection.

One could say that they are the single most important home entertainment distributors working today. That same person could also say that no one does cinematic restoration better than them. However, I think the Collection is a mass of film that is far more important and influential than on just a simple technical level.

To me, the collection is all about discovery; true, blue cinematic discovery.

Science Is Fiction, the collection’s release of 23 films from the famous filmmaker Jean Painleve is the epitome of this feeling.

At the start of the just completed Barnes And Nobles 50% off Criterion sale, I had a few films on my list to pick up. First, there was of course my favorite film of all time, Jean-Luc Godard’s Breathless, a film that for some reason, always ended up out of my hands. Then, there was Carol Reed’s Night Train To Munich, a film I’ve always meant to see from a filmmaker I’ve always deeply loved. However, most of the purchasing that I would be doing (a total of 9 releases as of the writing of this article), would be by the seat of my pants, when I walked into my local book chain.

That’s how this set came into my grasp.

I’ve always been compelled by the cover of this absolutely stunning and truly eye opening release, but always moved it back in my Netflix queue for something else. So, walking into the store, I saw that not only did they have a copy of this holy grail of experimental documentary filmmaking, but they had multiples, making me feel bittersweet as I ended up tossing the DVD in and seeing that this set is not only one of the best 40$ releases the collection has ever released, but this is also one of the releases from the collection, along with things like the two Brakhage releases and many of the foreign films, that has truly both inspired me, and actually showed me something completely new within the world of film.

First, what I thought of the actual release.

Science Is Fiction features 23 short films from Painleve, as well as a rather extensive, 169 minute documentary on him and his canon, all of which are visually arresting, stunning pieces of documentary filmmaking that truly prove not all documentaries need to have a political bent or obnoxious directors.

The 23 films are broken down into sections, with 13 ‘popular films,’ 3 early silents, 2 silent research films, four films that were shown at the legendary Le Palais De La Decouverte, and one animation short, along with a collection of eight film, all scored by the fantastic band, Yo La Tengo, known as The Sounds Of Science.

Personally, the film is at its best with the first disc. The collection of popular films, particularly shorts like Liquid Crystals, The Seahorce, and The Vampire, and not only intellectually stimulating, even for the most novice of science student, but for those who absolutely can’t stand the scientific jibber jabber, the visuals here are some of the most breathtaking seen in any documentary, ever made. Hyperbole aside, the film doesn’t scream experimental as much as a set like the two Brakhage releases, but as someone who thinks that documentary filmmaking is a dying artform, being replaced by polarizing money grabs that go for message instead of information, and in a blunt manner, this is an eyeopening group of shorts.

Liquid Crystals is the star here, that while not the most intellectually strong, is easily one of the greatest and most visually vibrant shorts this side of a Guy Maddin directed fever dream. The rest of the films are also striking, but if you have enough time to only see a handful, you’ll be hard pressed to get any more from a set than the first disc of Science Is Fiction.

The second disc however, is also fantastic, particularly the silent research films. These aren’t nearly as striking directorially, as these seem to be the researcher Painleve at his strongest, but they get some of the most breathtaking acts of nature that you may ever see. The things that Painleve is able to get with his camera is at times highly claustrophobic, often grotesque, and yet completely beautiful.

Beautiful. That really is the best way to describe this release.

The supplements here are also top notch, if not quite all that extensive. There is a watchable interview with Yo La Tengo, but doesn’t go for as long as one could really hope. The true star of this set is the third disc, the documentary, Jean Painleve Through His Films. It’s a longer watch, clocking in at just under three hours, but if you are as immensely enraptured by the set, in its entirety as I was, this is going to really round out this perfect diet of eye opening documentary filmmaking. You learn so much about the man behind these films, about his life, work, and filmography, that it would really fail you to miss out on this disc, if you simply rent it through Netflix.

However, the release itself is far more than just a run of the mill Criterion release. For the price tag, this is to me, one of the best and most worthwhile releases this collection has ever seen, for the simple fact that there is nothing like this that you have ever seen, or ever will.

In a world where we have a new comic book adaptation or a new toy being optioned for a film, or even board games now, this is the rare instance where a film goer can truly be wowed by something holy original, discovering something unlike anything you will or have ever seen. Sure, there may be better documentaries, hell, there may be better ones within the collection. However, no single release has left me so utterly enraptured after sitting through its entirety, than the horribly over looked Science Is Fiction set.

For fans of experimental film, this will feed that hunger like an all you can eat buffet cooked by the love child of Werner Herzog and Harmony Korine. For documentary fans, there are some of the greatest shots of nature that have ever been put to film. For fans of cinema, this is one of the most singularly original pieces ever put to celluloid. Do yourself a favor and run, don’t walk, and buy this masterpiece of a release. 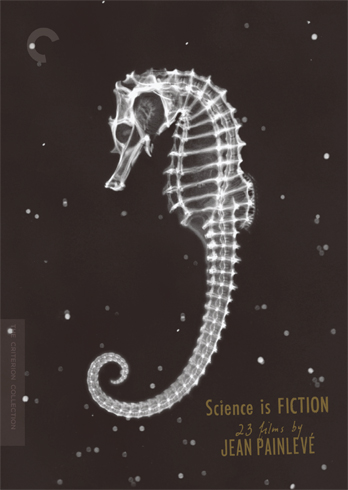 The mesmerizing, utterly unclassifiable science films of Jean Painlevé (1902-89) have to be seen to be believed: delightful, surrealist-influenced dream works that are also serious science. The French filmmaker-scientist-inventor had a decades-spanning career in which he created hundreds of short films on subjects ranging from astronomy to pigeons to, most famously, such marine-life marvels as the sea horse and the sea urchin. This definitive three-disc collection brings together the best of these, and also includes the French television series Jean Painlevé Through His Films, rock band Yo La Tengo’s eight-film score The Sounds of Science, and an essay by film scholar Scott MacDonald.